Computational Complexity of Stable Marriage and Stable Roommates and Their Variants

This paper gives an overview on and summarizes existing complexity and algorithmic results of some variants of the Stable Marriage and the Stable Roommates problems. The last section defines a list of stable matching problems mentioned in the paper. If you find any corrections, suggestions, new or missing results, please send them to jiehua.chen2@gmail.com. 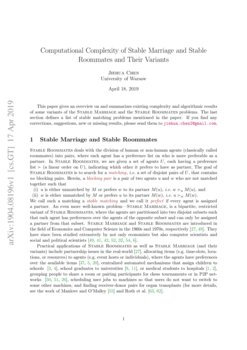 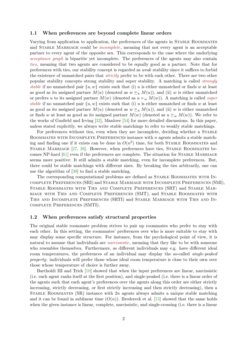 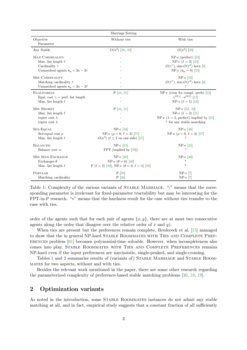 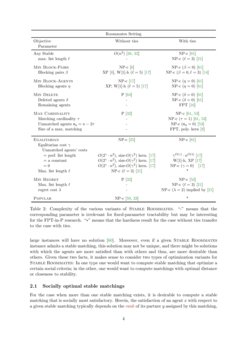 Stable Roommates deals with the division of human or non-human agents (classically called roommates) into pairs, where each agent has a preference list on who is more preferable as a partner. In Stable Roommates, we are given a set of agents U, each having a preference list ≻ (a linear order on U), indicating which other it prefers to have as partner, The goal of Stable Roommates is to search for a matching, i.e. a set of disjoint pairs of U, that contains no blocking pairs. Herein, a blocking pair is a pair of two agents u and w who are not matched together such that

We call such a matching a stable matching and we call it perfect if every agent is assigned a partner. An even more well-known problem—Stable Marriage, is a bipartite, restricted variant of Stable Roommates, where the agents are partitioned into two disjoint subsets such that each agent has preferences over the agents of the opposite subset and can only be assigned a partner from that subset. Stable Marriage and Stable Roommates are introduced in the field of Economics and Computer Science in the 1960s and 1970s, respectively [27, 49]. They have since been studied extensively by not only economists but also computer scientists and social and political scientists [49, 41, 42, 52, 32, 54, 6].

Practical applications of Stable Roommates as well as Stable Marriage (and their variants) include partnership issues in the real-world [27], allocating items (e.g. time-slots, locations, or resources) to agents (e.g. event hosts or individuals), where the agents have preferences over the available items [37, 5, 20], centralized automated mechanisms that assign children to schools  [3, 4], school graduates to universities [9, 11], or medical students to hospitals [1, 2], grouping people to share a room or pairing participants for chess tournaments or in P2P networks  [50, 51, 26], scheduling user jobs to machines so that users do not want to switch to some other machines, and finding receiver-donor pairs for organ transplants (for more details, see the work of Manlove and O’Malley [55] and Roth et al. [63, 62].

1.1 When preferences are beyond complete linear orders

The original stable roommate problem strives to pair up roommates who prefer to stay with each other. In this setting, the roommates’ preferences over who is more suitable to stay with may display some specific structure. For instance, from the psychological point of view, it is natural to assume that individuals are narcissistic, meaning that they like to be with someone who resembles themselves. Furthermore, as different individuals may e.g. have different ideal room temperatures, the preferences of an individual may display the so-called single-peaked property: individuals will prefer those whose ideal room temperature is close to their own over those whose temperature of choice is further away.

Tables 2 and 1 summarize results of (variants of) Stable Marriage and Stable Roommates for two aspects, without and with ties.

Besides the relevant work mentioned in the paper, there are some other research regarding the parameterized complexity of preference-based stable matching problems [30, 18, 19].

As noted in the introduction, some Stable Roommates instances do not admit any stable matching at all, and in fact, empirical study suggests that a constant fraction of all sufficiently large instances will have no solution [60]. Moreover, even if a given Stable Roommates instance admits a stable matching, this solution may not be unique, and there might be solutions with which the agents are more satisfied than with others and thus, are more desirable than others. Given these two facts, it makes sense to consider two types of optimization variants for Stable Roommates: In one type one would want to compute stable matching that optimize a certain social criteria; in the other, one would want to compute matchings with optimal distance or closeness to stability.

For the case when more than one stable matching exists, it is desirable to compute a stable matching that is socially most satisfactory. Herein, the satisfaction of an agent x with respect to a given stable matching typically depends on the rank of its partner y assigned by this matching, which is the number of agents that are strictly preferred to y by x.

A stable matching is regarded as socially optimal if

Accordingly, we define the egalitarian cost and the regret cost of a matching M as

For preferences with ties, both Egalitarian Stable Marriage and Min Regret Stable Marriage become NP-hard [53]. Thus, already in the bipartite case, it becomes apparent that allowing ties in preference lists makes the task of computing an optimal egalitarian matching much more challenging. Marx and Schlotter [56] showed, among other results, that Egalitarian Stable Marriage and Min Regret Stable Marriage are fixed-parameter tractable when parameterized by the parameter “sum of the lengths of all ties”. Halldórsson et al. [33] showed inapproximability results for each of both problems. Irving et al. [45] showed that finding a perfect stable matching in a Stable Marriage instance with ties is NP-hard, even when the length of each preference list is bounded by three and the ties occur only on one side. It is obvious that in the same setting, finding a perfect stable matching with minimum regret two (note that we defined the regret cost to be the maximum rank of the partner of any agent) remains NP-hard.

For Stable Marriage, there are two more measures on socially optimal stable matchings: It may be desirable to find

Accordingly, we define the equal-cost, the balance-cost, the exchange-cost of a matching M as

McDermid and Irving [57] showed Sex-Equal Stable Marriage is NP-complete, even if no ties are present and the preference list of each agent has length at most three. When ties are present, its optimization variant cannot be approximated within arbitrary constant factor unless P=NP [34].

When ties are not present, with respect to the parameter t, which is “the balance cost α plus the number of matched men”, it is straight-forward to verify that Balanced Stable Marriage is fixed-parameter tractable. Thus, Gupta et al. [29] studied parameterized complexity of Balanced Stable Marriage with respect to two parameters that measure that distance to the parameter t. They showed that for the first one it admits a kernel and for the second one it is W[1]-hard.

McDermid et al. [58] showed that Min Man-Exchange Stable Marriage is NP-complete even without ties and when the preference list of each agent has length at most four.

For the case when no stable matchings exist, the agents may still be satisfied with a matching that is close to being stable. Such closeness could be measured, for example,

The closely related Max-Card Stable Marriage (Max-SM) problem (where the preferences are incomplete and have ties) is NP-hard, even if (1) the ties are at the tails of the lists and occur on one side only, (2) each list has at most one tie, and (3) each tie is of length two [53].

Max-SM has been extensively studied: When on one side, the preference list of each agent has at most two agents, Irving et al. [45] showed that Max-SM can be solved in polynomial time by using a simple extension of the Gale/Shapley algorithm for the case without ties. They compliment this tractability result by showing that even if each agent finds at most three agents acceptable, Max-SM is NP-complete.

There are both constant-factor approximation algorithms and inapproximability results for the problem [33, 34, 43, 53, 47, 46]. In particular, Halldórsson et al. [34] showed that both the maximization and the minimization variant of Max-SM is NP-hard to approximate within some constant factor. The result holds even if the preference lists have bounded length, and there is at most one tie per list, and the ties occur on one side only.

Note that by our definition of stability, a matching which leaves two agents unmatched can never be stable so that a stable matching resulting from precluding δ agents in general cannot guarantee a stable matching with cardinality (n−δ)/2.

Abraham et al. [6] showed that Min-Block-Pairs Stable Roommates is NP-hard, and cannot be approximated within a factor of n0.5−ε unless P=NP, even if the given preferences are complete. They also showed that the problem can be solved in nO(β) time, where n and β denote the number of agents and the number of blocking pairs, respectively. This implies that the problem is in the parameterized complexity class XP for parameter β. Biró et al. [14] showed that the problem is NP-hard and APX-hard even if each agent has a preference list of length at most 3, and presented a (2ℓ−3)-approximation algorithm for bounded list length ℓ. Biró et al. [13] and Hamada et al. [35] showed that the related variant of Stable Marriage, where the goal is to find a matching with minimum blocking pairs among all maximum-cardinality matchings, cannot be approximated within n1−ε unless P=NP.

Every problem described starting from 5 is defined for the roommates setting without ties. It can be restricted to the marriage case and generalized to the case with ties. However, for some of the problems, we need to carefully adjust the measurement to also tackle the cost of agents that are unmatched.