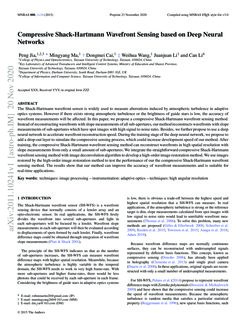 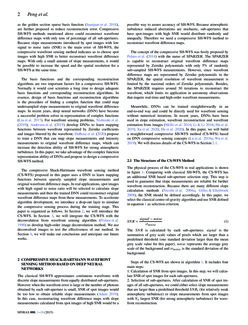 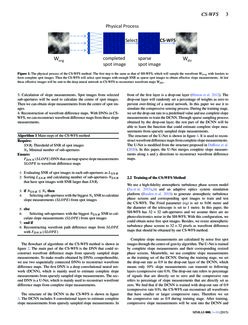 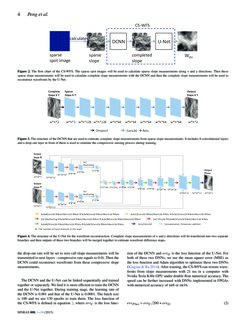 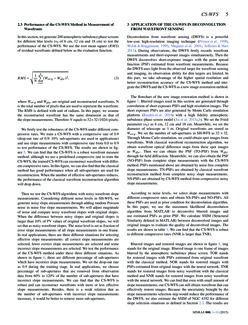 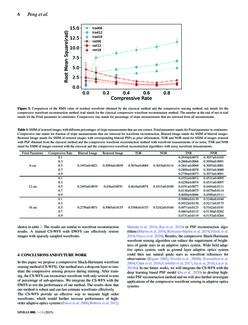 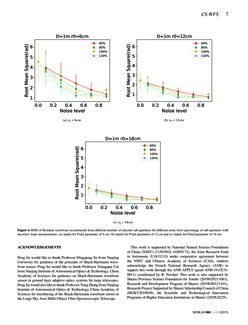 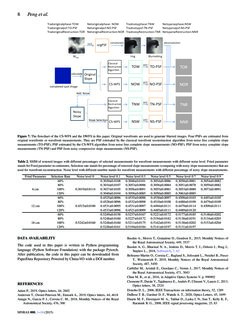 The principle of the SH-WFS indicates us that as the number of sub-apertures increases, the SH-WFS can measure wavefront difference maps with higher spatial resolution. Meanwhile, because the atmospheric turbulence is highly variable in the temporal domain, the SH-WFS needs to work in very high frame-rate. With more sub-apertures and higher frame-rates, there would be less photons that could be received by each sub-aperture in each frame. Considering the brightness of guide stars in adaptive optics systems is low, there is obvious a trade-off between the highest speed and highest spatial resolution that a SH-WFS can measure. In real applications, if the atmospheric turbulence is strong or the reference target is dim, slope measurements calculated from spot images with low signal to noise ratio would lead to unreliable wavefront measurements (Thomas et al., 2006). To solve this problem, many new methods are proposed (Gilles and Ellerbroek, 2008; Schreiber et al., 2009; Basden et al., 2015; Townson et al., 2015; Anugu et al., 2018; Adam, 2019).

Because wavefront difference maps are normally continuous surfaces, they can be reconstructed with undersampled signals represented by different basis functions. This concept, known as compressive sensing (Donoho, 2006), has already been applied in holography (Clemente et al., 2013) and single pixel camera (Duarte et al., 2008). In these applications, original signals are reconstructed with only a small number of undersampled measurements.

For SH-WFS, Polans et al. (2014) propose to represent wavefront difference maps with Zernike polynomials (Hosseini and Michailovich, 2009) and have shown that the compressive sensing could increase the speed of wavefront measurements. Because the atmospheric turbulence is random media that satisfies a particular statistical property (Roggemann et al., 1996), new sparse basis functions, such as the golden section sparse basis function (Juanjuan et al., 2018), are further proposed to reduce reconstruction error. Compressive SH-WFS methods mentioned above could reconstruct wavefront difference maps with only tens of percentage of all sub-apertures. Because slope measurements introduced by spot images with low signal to noise ratio (SNR) is the main error of SH-WFS, the compressive wavefront sensing method indicates us to choose spot images with high SNR to better reconstruct wavefront difference maps. With only a small amount of slope measurements, it would be possible to increase the speed and the spatial resolution for a SH-WFS at the same time.

The basis functions and the corresponding reconstruction algorithms are two important factors for a compressive SH-WFS. Normally it would cost scientists a long time to design adequate basis functions and corresponding reconstruction algorithms. In essence, design of basis functions and reconstruction algorithms is the procedure of finding a complex function that could map undersampled slope measurements to original wavefront difference maps. In recent years, deep neural networks (DNN) have become a successful problem solver in representation of complex functions (Liu et al., 2017). For wavefront sensing problems, Nishizaki et al. (2019); Andersen et al. (2019) develop DNNs to learn mapping functions between wavefront represented by Zernike coefficients and images blurred by the wavefront. DuBose et al. (2020) propose to train a DNN that can map slope measurements and intensity measurements to original wavefront difference maps, which can increase the detection ability of SH-WFS for strong atmospheric turbulence. In this paper, we take advantage of the complex function representation ability of DNNs and propose to design a compressive SH-WFS method.

The compressive Shack-Hartmann wavefront sensing method (CS-WFS) proposed in this paper uses a DNN to learn mapping functions between sparsely sampled slope measurements and original wavefront difference maps. In real applications, spot images with high signal to noise ratio will be selected to calculate slope measurements and then the trained DNN could reconstruct original wavefront difference maps from these measurements. To accelerate algorithm development, we introduce a drop-out layer to simulate the compressive sensing process during the training stage. This paper is organized as follows. In Section 2, we will introduce the CS-WFS. In Section 3, we will integrate the CS-WFS with the deconvolution from wavefront sensing algorithm (Primot et al., 1990) to develop high-order image deconvolution method. We use deconvolved images to test the effectiveness of our method. In Section 4, we will make our conclusions and anticipate our future works.

The classical SH-WFS approximates continuous wavefronts with discrete slope measurements from equally distributed sub-apertures. However when the wavefront error is large or the number of photons obtained by each sub-aperture is small, SNR of spot images would be too low to obtain reliable slope measurements (Adam, 2019). In this case, reconstructing wavefront difference maps with slope measurements calculated from spot images of high SNR would be a possible way to assure accuracy of SH-WFS. Because atmospheric turbulence induced aberrations are stochastic, sub-apertures that have spot-images with high SNR would distribute randomly and unequally. Therefore we need a compressive SH-WFS method to reconstruct wavefront difference maps.

The concept of the compressive SH-WFS was firstly proposed by Polans et al. (2014) with the name of SPARZER. The SPARZER is capable to reconstruct original wavefront difference maps represented by Zernike polynomials with only 5% of randomly sub-sampled SH-WFS measurements. However, since wavefront difference maps are represented by Zernike polynomials in the SPARZER, the spatial resolution of wavefront measurement is limited by the maximal orders of Zernike polynomials. Besides, the SPARZER requires around 30 iterations to reconstruct the wavefront, which limits its application in astronomy observations that require real-time and high-order wavefront measurements.

Meanwhile, DNNs can be trained straightforwardly in an end-to-end way and could be directly used for wavefront sensing without numerical iterations. In recent years, DNNs have been used in slope estimation, wavefront reconstruction and wavefront estimation from images

2.1 The Structure of the CS-WFS Method

The physical process of the CS-WFS in real applications is shown in figure 1. Comparing with classical SH-WFS, the CS-WFS has an additional SNR based sub-aperture selection step. This step is used to guarantee that slope measurements are reliable for further wavefront reconstruction. Because there are many different slope calculation methods (Nicolle et al., 2004a; Gilles and Ellerbroek, 2008), the SNR should be defined accordingly. In this paper, we select the classical centre-of-gravity algorithm and use SNR defined in equation 1 as selection criterion.

The SNR is calculated by each sub-apertures. signal

The structure of the U-Net is shown in figure 4. It is used to reconstruct wavefront difference maps from complete slope measurements. The U-Net is modified from the structure proposed in DuBose et al. (2020). In this paper, the U-Net merges complete slope measurements along x and y directions to reconstruct wavefront difference maps.

2.2 Training of the CS-WFS Method

2.3 Performance of the CS-WFS Method in Measurement of Wavefronts

In this section, we generate 200 atmospheric turbulence phase screens for different blur levels (r0 of 6 cm, 12 cm and 18 cm) to test the performance of the CS-WFS. We use the root mean square (RMS) of residual wavefronts defined below as the evaluation function.

where Worg and Wdir are original and reconstructed wavefronts, N is the total number of pixels that are used to represent the wavefront. The RMS is defined with unit of radians. In this paper, we assume the reconstructed wavefront has the same dimension as that of the slope measurements. Therefore N equals to 32×32 (1024) pixels.

3 Application of the CS-WFS in Deconvolution from Wavefront Sensing

Deconvolution from wavefront sensing (DWFS) is a powerful low-cost high-resolution imaging technique (Primot et al., 1990; Welsh and Roggemann, 1995; Mugnier et al., 2001; Jefferies and Hart, 2011). During observations, the DWFS firstly records wavefront measurements and short-exposure images simultaneously. Then the DWFS deconvolves short-exposure images with the point spread function (PSF) estimated from wavefront measurements. Because the DWFS uses light from the observed target for wavefront sensing and imaging, its observation ability for dim targets are limited. In this part, we take advantage of the higher spatial resolution and better reconstruction accuracy of the CS-WFS method and integrate the DWFS and the CS-WFS as a new image restoration method.

The flowchart of the new image restoration method is shown in figure 7. Blurred images used in this section are generated through convolution of short exposure PSFs and high resolution images. The short exposure PSFs are also generated by Monte Carlo simulation platform (Basden et al., 2018) with a high fidelity atmospheric turbulence phase screen model (Jia et al., 2015b, a). We set the Fried parameter (r0) as 6 cm, 12 cm and 18 cm. Meanwhile, we set the diameter of telescope as 1 m. Original wavefronts are stored as Worg. We set the number of sub-apertures in SH-WFS as 32×32. Through Monte Carlo simulation, we could obtain spot images from wavefronts. With classical wavefront reconstruction algorithm, we obtain wavefront optical difference maps from these spot images as Wdir. Then we can obtain the PSF (TO-PSF) from Wdir through far field diffraction. Meanwhile, we can also obtain the PSF (NO-PSF) from complete slope measurements with the CS-WFS method. PSFs mentioned above are obtained by noise free complete slope measurements. TN-PSFs are obtained by classical wavefront reconstruction method from complete noisy slope measurements. NS-PSFs are obtained by CS-WFS method from compressive noisy slope measurements.

According to noise levels, we select slope measurements with different compressive rates and obtain NS-PSFs and NO-PSFs. All these PSFs are used as prior condition for deconvolution algorithm. In this paper, we use the maximum likelihood deconvolution algorithm from MATLAB to deconvolve blurred images and use estimated PSFs as prior PSF. We calculate SSIM (Structural Similarity defined in MATLAB) between deconvolved images and original images to evaluate the quality of deconvolved images. The results are shown in table 1. We can find that the CS-WFS is robust to different compressive rates (NNR is larger than TNR).

. In our future works, we will integrate the CS-WFS with the deep learning based PSF model

This work is supported by National Natural Science Foundation of China (NSFC) (11503018, 61805173), the Joint Research Fund in Astronomy (U1631133) under cooperative agreement between the NSFC and Chinese Academy of Sciences (CAS). Authors acknowledge the French National Research Agency (ANR) to support this work through the ANR APPLY (grant ANR-19-CE31-0011) coordinated by B. Neichel. This work is also supported by Shanxi Province Science Foundation for Youths (201901D211081), Research and Development Program of Shanxi (201903D121161), Research Project Supported by Shanxi Scholarship Council of China (HGKY2019039), the Scientific and Technological Innovation Programs of Higher Education Institutions in Shanxi (2019L0225).

The code used in this paper is written in Python programming language (Python Software Foundation) with the package Pytorch. After publication, the code in this paper can be downloaded from PaperData Repository Powered by China-VO with a DOI number.