Video analytics requires operating with large amounts of data. Compressive sensing allows to reduce the number of measurements required to represent the video using the prior knowledge of sparsity of the original signal, but it imposes certain conditions on the design matrix. The Bayesian compressive sensing approach relaxes the limitations of the conventional approach using the probabilistic reasoning and allows to include different prior knowledge about the signal structure. This paper presents two Bayesian compressive sensing methods for autonomous object detection in a video sequence from a static camera. Their performance is compared on the real datasets with the non-Bayesian greedy algorithm. It is shown that the Bayesian methods can provide the same accuracy as the greedy algorithm but much faster; or if the computational time is not critical they can provide more accurate results. 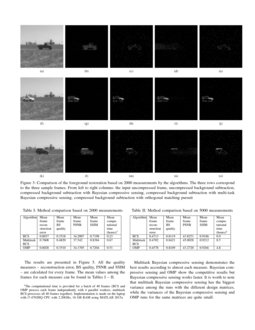 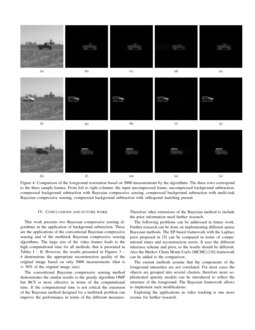 This work considers an estimation task in compressive sensing, where the...
Swayambhoo Jain, et al. ∙

The significant developments in the field of sparse models during the last decades lead to the opening of the new research and application fields.

l0 and l1-norm regularisation is considered. The latter has the advantage that a regulariser term is convex, while it has not so obvious sparse interpretation [1].

Sparse modelling is further developed in the field of signal processing in compressive sensing [2], where the main idea is to minimise the number of measurements of the signal without loss of the decoding accuracy. Compressive sensing concerns the two main problems: selecting the optimal design matrix and solving ill-posed regression, that arises in the original signal decoding from the measurements [3].

The idea of sparse Bayesian modelling is mentioned in [4]

. This imposes the sparsity-inducing Laplace prior on the data, but does not give the inference for the whole distribution, only a maximum aposteriori probability estimate. The full inference to this model is provided in

[5], using the Expectation Propagation (EP) technique. Another work is [6]

, where the prior is modified to the hierarchical Gauss-Gamma distribution. These models are used as a basis for Bayesian compressive sensing in

The contribution of this paper is in applying the Bayesian compressive sensing approach for the background subtraction problem. As far as the authors know, this approach for moving object detection has not been considered yet. Also several algorithms are overviewed and compared to evaluate their applicability in different situations.

This paper is organised as follows. In Section II the proposed model is explained. The experimental results are represented in Section III. Section IV concludes the paper and discusses the future work.

Assume that we have a static camera and we can acquire a frame B∈Rn1×n2 from the camera that is referenced as the background. The video from the camera consists of the sequential frames Vk∈Rn1×n2,k∈{1,…,K}. The aim is to estimate the mask of the foreground objects in these frames.

We convert the source video frames to greyscale. The background frame B

is converted to a vector

Typically the foreground objects take only a part of the image. Therefore the foreground mask fk=vk−b has many values that are close to zero. This intuition can be represented as an assumption of

l0-pseudonorm is the number of non-zero elements of a vector.

We apply the compressive sensing theory to this problem. It reduces the number of measurements that need to be taken [2] and also the results may be denoised [9]. The values of the foreground mask are estimated based on the set of the compressed measurements gk∈Rs:

where the design matrix Φ∈Rs×n consists of i.i.d Gaussian variables. It is selected according to the method proposed in [12].

Since fk=vk−b, the estimates of the coefficients gk can be done on the acquisition step as

The vectors Φb and Φvk are the linear combinations of the pixels of the video frames, therefore a single pixel camera may be used. The problem of the foreground mask reconstruction is more difficult.

The linear system (3) is underdetermined when n>s therefore an infinite amount of solutions exists. The problem can be determined by the regulariser imposing in the assumption that the signal fk has a sparse structure. The common regularisers that are used in compressive sensing are minimisers of the lp norm, where p<2.

The conventional methods to solve such systems are following [13, Chapter 13]:

In this paper we will focus on the Bayesian methods [7, 14] and compare them with orthogonal matching pursuit (OMP) [15], that is a greedy algorithm for l0-minimisation. The following represents the brief review of these methods.

The system (3) is reformulated as a linear regression model in [7]:

is a vector which elements are the independent noise from the Gaussian distribution:

ξi∼N(ξi;0,β−1). Therefore the likelihood can be expressed as

where gi,k is the i-th element of the vector gk, Φi – the i-th row of the matrix Φ.

To implement the full Bayesian approach, the prior distributions are imposed on all parameters:

denotes the Gamma distribution. The values of the hyperparameters

a,b,c,d are set uniform and close to zero.

According to the Bayes rule the posterior distribution can be written as follows:

where p(gk|fk,α,β) is the likelihood term, p(fk,α,β) is the prior term, p(gk) is the evidence term. The latter can be expressed as:

This integral is intractable, therefore some kind of approximation should be used.

the decomposition of the posterior probability into the product of the tractable and intractable probabilities is used and the intractable one is approximated with the delta-function in its mode:

The Bayes rule for the first term of (11) is as follows:

These are all the Gaussians, so the probability p(fk|α,β,gk) can be calculated straightforwardly. It is the Gaussian distribution with the parameters

The second term of the posterior probability (11) can be expressed as:

As it has been already shown, the denominator here is not tractable. The most probable values of α,β

are used. The hyperpriors are uniform, therefore only the term

p(gk|α,β) needs to be maximised:

This process together with (13) - (14) converges to the optimal estimates.

This is the Student-t distribution, that has the most probable area concentrated around zero. Thereby it leads to the sparse vector fk.

The graphical model is displayed in Figure 1.

In [14] the Bayesian method to process several signals that have a similar sparse structure is proposed. The multitask setting reduces the number of measurements that should be taken comparing to processing all the signals independently. The hyperparameter α is considered to be shared by all the tasks. The graphical model is displayed in Figure 2.

The greedy algorithms are proposed for the l0 minimisation in [15]. These methods start with a null vector and iteratively add variables to it until a convergence to a threshold.

We use the Convoy dataset [11], which consists of 260 greyscale frames and the background frame. The frames are scaled to the less resolution of 128×128 to avoid memory problems. For the multitask algorithm the batches of 40 frames are run together, while for the Bayesian compressive sensing and OMP algorithms all the frames are processed independently. There are two sets of the experiments: one with s=2000 measurements and the other with s=5000 measurements. For both sets of the experiments all three methods are run for 10 times with 10 different design matrices Φ shared among the methods. For the quantitative comparison the median values of quality measures among these runs are presented.

The qualitative comparison of the models with the same design matrix Φ is displayed in Figures 18 - 34. The three demonstrative frames are presented. One can notice that with the same design matrix the models demonstrate similar results. The figures show that 2000 measurements can be used for object region detection, while 5000 measurements which is only about 30% of the input resolution are enough even to distinguish parts of the objects like doors and windows of the cars.

For the quantitative comparison of the results the following measures are used:

The difference between the uncompressed current frame vk and the uncompressed background frame b is used as the ground truth signal f for every frame (the second columns in Figures 18 - 34), since this is the signal which is compressed by (3).

The results are presented in Figure 43. All the quality measures – reconstruction error, BS quality, PSNR and SSIM – are calculated for every frame. The mean values among the frames for each measure can be found in Tables I – II.

The conventional Bayesian compressive sensing method demonstrates the similar results to the greedy algorithm OMP but BCS is more effective in terms of the computational time. If the computational time is not critical the extension of the Bayesian method designed for a multitask problem can improve the performance in terms of the different measures. Therefore other extensions of the Bayesian method to include the prior information need further research.

The following problems can be addressed in future work. Further research can be done on implementing different sparse Bayesian methods. The EP-based framework with the Laplace prior proposed in [5]

can be compared in terms of computational times and reconstruction errors. It uses the different inference scheme and prior, so the results should be different. Also the Markov Chain Monte Carlo (MCMC)

[16] framework can be added to the comparison.

The current methods assume that the components of the foreground intensities are not correlated. For most cases the objects are grouped into several clusters, therefore more sophisticated sparsity models can be introduced to reflect the structure of the foreground. The Bayesian framework allows to implement such modifications.

Exploring the applications in video tracking is one more avenue for further research.

The authors Olga Isupova and Lyudmila Mihaylova are grateful for the support provided by the EC Seventh Framework Programme [FP7 2013-2017] TRAcking in compleX sensor systems (TRAX) Grant agreement no.: 607400. Lyudmila Mihaylova acknowledges also the support from the UK Engineering and Physical Sciences Research Council (EPSRC) via the Bayesian Tracking and Reasoning over Time (BTaRoT) grant EP/K021516/1.