We propose a method for inferring the conditional indepen- dence graph (CIG) of a high-dimensional discrete-time Gaus- sian vector random process from finite-length observations. Our approach does not rely on a parametric model (such as, e.g., an autoregressive model) for the vector random process; rather, it only assumes certain spectral smoothness proper- ties. The proposed inference scheme is compressive in that it works for sample sizes that are (much) smaller than the number of scalar process components. We provide analytical conditions for our method to correctly identify the CIG with high probability. 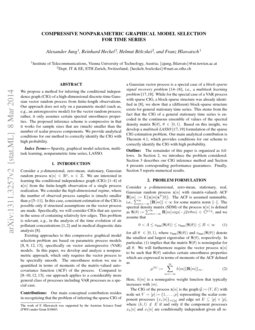 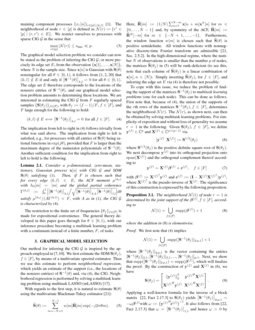 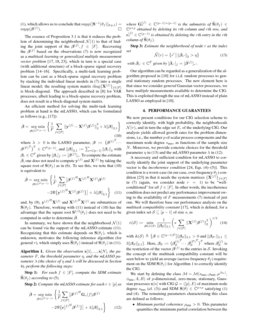 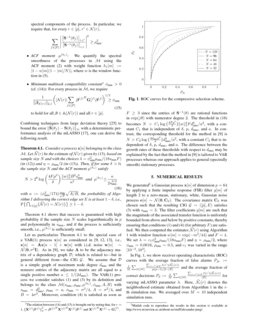 Consider a p-dimensional, zero-mean, stationary, Gaussian random process x[n]∈Rp, n∈Z. We are interested in learning the conditional independence graph (CIG) [1, 2, 3, 4] of x[n] from the finite-length observation of a single process realization. We consider the high-dimensional regime, where the number of observed process samples is (much) smaller than p [5, 6, 7, 8, 9, 10, 11]

. In this case, consistent estimation of the CIG is possible only if structural assumptions on the vector process are made. Specifically, we will consider CIGs that are

sparse in the sense of containing relatively few edges. This problem is relevant, e.g., in the analysis of the time evolution of air pollutant concentrations [1, 2] and in medical diagnostic data analysis [8].

Existing approaches to this compressive graphical model selection problem are based on parametric process models [8, 9, 12, 13]

, specifically on vector autoregressive (VAR) models. In this paper, we develop and analyze a nonparametric approach, which only requires the vector process to be spectrally smooth. The smoothness notion we use is quantified in terms of moments of the matrix-valued auto-covariance function (ACF) of the process. Compared to

[10, 8, 9, 12, 13], our approach applies to a considerably more general class of processes including VAR processes as a special case.

Our main conceptual contribution resides in recognizing that the problem of inferring the sparse CIG of a Gaussian vector process is a special case of a block-sparse signal recovery problem [14, 15, 16], i.e., a multitask learning problem [17, 18]. While for the special case of a VAR process with sparse CIG, a block-sparse structure was already identified in [8], we show that a (different) block-sparse structure exists for general stationary time series. This stems from the fact that the CIG of a general stationary time series is encoded in the continuous ensemble of values of the spectral density matrix S(θ), θ∈[0,1). Based on this insight, we develop a multitask LASSO [17, 19] formulation of the sparse CIG estimation problem. Our main analytical contribution is Theorem 4.1, which provides conditions for our scheme to correctly identify the CIG with high probability.

The remainder of this paper is organized as follows. In Section 2, we introduce the problem considered. Section 3 describes our CIG inference method and Section 4 presents corresponding performance guarantees. Finally, Section 5 reports numerical results.

denote the smallest and largest eigenvalue of

S(θ), respectively. In particular, (1) implies that the matrix S(θ) is nonsingular for all θ. We will furthermore require the vector process x[n] to be such that S(θ) satisfies certain smoothness properties which are expressed in terms of moments of the ACF defined as

Here, h[m] is a nonnegative weight function that typically increases with |m|.

The graphical model selection problem we consider can now be stated as the problem of inferring the CIG G, or more precisely its edge set E, from the observation (x[1],…,x[N]), where N is the sample size. Since x[n] is Gaussian with S(θ) nonsingular for all θ∈[0,1), it follows from [1, 2, 20] that (k,l)∉E if and only if [S−1(θ)]k,l=0 for all θ∈[0,1). The edge set E therefore corresponds to the locations of the nonzero entries of S−1(θ), and our graphical model selection problem amounts to determining these locations. We are interested in estimating the CIG G from F regularly spaced samples {S(θf)}f∈[F], with θf:=(f−1)/F, f∈[F], and F large enough for the following to hold:

The restriction to the finite set of frequencies {θf}f∈[F] is made for expositional convenience. The general theory developed in this paper goes through for θ∈[0,1), with our inference procedure becoming a multitask learning problem with a continuum instead of a finite number, F, of tasks.

Our method for inferring the CIG G is inspired by the approach employed in [10, 7]. We first estimate the SDM S(θf), f∈[F], by means of a multivariate spectral estimator. Then we use this estimate to perform neighborhood regression, which yields an estimate of the support (i.e., the locations of the nonzero entries) of S−1(θ) and, via (4), the CIG. Neighborhood regression is performed by solving a multitask learning problem using multitask LASSO (mLASSO) [17].

With regards to the first step, it is natural to estimate S(θ) using the multivariate Blackman-Tukey estimator [21]:

is positive semidefinite. All window functions with nonnegative discrete-time Fourier transform are admissible

[21, Sec. 2.5.2]. In the high-dimensional regime, where the number N of observations is smaller than the number p of nodes, the matrices ˆS(θf) in (5) will be rank-deficient (to see this, note that each column of ˆS(θf) is a linear combination of x[n],n∈[N]). Simply inverting ˆS(θf), for f∈[F], and inferring the edge set E via (4) is therefore not possible.

To cope with this issue, we reduce the problem of finding the support of the matrices S−1(θf) to multitask learning problems (one for each node). This can be done as follows. First note that, because of (4), the union of the supports of the rth rows of the matrices S−1(θf),f∈[F], determines the neighborhood N(r). The N(r), as shown next, can then be obtained by solving multitask learning problems. For simplicity of exposition and without loss of generality we assume r=1 in the following. Given S(θf), f∈[F], we define y(f)∈Cp and X(f)∈Cp×(p−1) via

where S1/2(θf) is the positive definite square root of S(θf). We next decompose y(f) into its orthogonal projection onto span(X(f)) and the orthogonal complement thereof according to

The neighborhood N(1) of node r=1 is determined by the joint support of the β(f),f∈[F], according to

where the addition in (8) is elementwise.

We first note that (4) implies

The essence of Proposition 3.1 is that it reduces the problem of determining the neighborhood N(1) to that of finding the joint support of the β(f),f∈[F]. Recovering the β(f) based on the observations (7) is now recognized as a multitask learning or generalized multiple measurement vector problem [17, 18, 23], which in turn is a special case (with additional structure) of a block-sparse signal recovery problem [14, 15, 16]. Specifically, a multi-task learning problem can be cast as a block-sparse signal recovery problem by stacking the individual linear models in (7) into a single linear model; the resulting system matrix diag{X(f)}f∈[F] is block-diagonal. The approach described in [8] for VAR processes, albeit leading to a block-sparse recovery problem, does not result in a block-diagonal system matrix.

An efficient method for solving the multi-task learning problem at hand is the mLASSO, which can be formulated as follows (e.g., [17]):

and, by (9), y(f)HX(f) and X(f)HX(f) are submatrices of S(θf). Therefore, working with (3) instead of (LABEL:equ_multitask_lasso_graph_sel_statistic) has the advantage that the square root S1/2(θf) does not need to be computed in order to determine ^β.

In summary, we have shown that the neighborhood N(1) can be found via the support of the mLASSO estimate (3). Recognizing that this estimate depends on S(θf), which is unknown, motivates the following inference algorithm (for general r), which simply uses ˆS(θf) instead of S(θf) in (3).

Given the observation x[1],...,x[N], the parameter F, the threshold parameter η, and the mLASSO parameter λ (the choice of η and λ will be discussed in Section 4), perform the following steps:

Step 3: Estimate the neighborhood of node r as the index set

Our algorithm can be regarded as a generalization of the algorithm proposed in [10] for i.i.d. random processes to general stationary random processes. The new element here is that since we consider general Gaussian vector processes, we have multiple measurements available to determine the CIG. This is exploited through the use of mLASSO instead of plain LASSO as employed in [10].

We now present conditions for our CIG selection scheme to correctly identify, with high probability, the neighborhoods N(r), and in turn the edge set E, of the underlying CIG. Our analysis yields allowed growth rates for the problem dimensions, i.e., the number p of scalar process components and the maximum node degree smax, as functions of the sample size N. Moreover, we provide concrete choices for the threshold parameter η in (13) and the mLASSO parameter λ in (1).

A necessary and sufficient condition for mLASSO to correctly identify the joint support of the underlying parameter vector is the incoherence condition [24, Eqs. (4)–(5)]. This condition is a worst-case (in our case, over frequency θf) condition [23] in that it needs the system matrices {X(f)}f∈[F] in (7) (again, we consider node r=1) to be “well-conditioned” for all f∈[F]. In other words, the incoherence condition does not predict any performance improvement owing to the availability of F measurements (7) instead of just one. We will therefore base our performance analysis on the multitask compatibility constant [17], which is defined, for a given index set S⊆[p−1] of size s, as

with . Here, βS:=(β(1)ST⋯β(F)ST)T where β(f)S is the restriction of the vector β(f) to the entries in S. Invoking the concept of the multitask compatibility constant will be seen below to yield an average (across frequency θf) requirement on the SDM S(θf) for Algorithm 1 to correctly identify the CIG.

We start by defining the class M=M(smax,ρmin,μ(h1),\breakϕmin,A,B) of p-dimensional, zero-mean, stationary, Gaussian processes x[n] with CIG G=([p],E) of maximum node degree smax (cf. (3)) and SDM S(θ)∈Cp×p satisfying (1) and (4). The remaining parameters characterizing this class are defined as follows:

Combining techniques from large deviation theory [25] to bound the error ∥ˆS(θf)−S(θf)∥∞ with a deterministic performance analysis of the mLASSO [17], one can derive the following result.

Theorem 4.1 shows that success is guaranteed with high probability if the sample size N scales logarithmically in p and polynomially in smax, and if the process is sufficiently smooth, i.e., μ(h1) is sufficiently small.

Let us particularize Theorem 4.1 to the special case of a VAR(1) process x[n] as considered in [9, 13, 12], i.e., x[n]=Ax[n−1]+w[n] with i.i.d. noise w[n] ∼N(0,σ2I). As in [9], we take A to be the adjacency matrix of a dependency graph D, which is related to—but in general different from—the CIG G. We assume that D is a simple graph of maximum node degree dmax and the nonzero entries of the adjacency matrix are all equal to a single positive number a≤1/(2dmax). The VAR(1) process we consider satisfies (1) and (3) by its definition and belongs to the class M(smax,ρmin,μ(h1),ϕmin,A,B) with smax=d2max, ρmin=a, ϕmin=σ2/4, A=σ2/4, and B=4σ2. Moreover, condition (4) is satisfied as soon as F≥3 since the entries of S−1(θ) are rational functions in exp(jθ) with numerator degree 2. The threshold in (LABEL:eq:condonN) becomes N>C1log(4Fp3δ)∥w∥21Fd6max/a2, with a constant C1 that is independent of δ, p, dmax, and a. In contrast, the corresponding threshold for the method in [9] is N>C2log(4dmaxp2δ)d3max/a2, with a constant C2 that is independent of δ, p, dmax, and a. The difference between the growth rates of these thresholds with respect to dmax may be explained by the fact that the method in [9] is tailored to VAR processes whereas our approach applies to general (spectrally smooth) stationary processes.

We generated222Matlab code to reproduce the results in this section is available at http://www.nt.tuwien.ac.at/about-us/staff/alexander-jung/. a Gaussian process x[n] of dimension p=64 by applying a finite impulse response (FIR) filter g[m] of length 2 to a zero-mean, stationary, white, Gaussian noise process e[n]∼N(0,C0). The covariance matrix C0 was chosen such that the resulting CIG G=([p],E) satisfies (3) with smax=3. The filter coefficients g[m] are such that the magnitude of the associated transfer function is uniformly bounded from above and below by positive constants, thereby ensuring that conditions (1) and (4) (for arbitrary F) are satisfied. We then computed the estimates ˆN(r) using Algorithm 1 with window function w[m]=exp(−m2/44) and F=4. We set λ=c1ϕ2minρmin/(18smaxF) and η=ρmin/2, where ϕmin=0.0616, ρmin=0.5, and c1 was varied in the range [10−3,103].