Gaussian processes (GPs) are nonparametric priors over functions, and fitting a GP to the data implies computing the posterior distribution of the functions consistent with the observed data. Similarly, deep Gaussian processes (DGPs) [Damianou:2013] should allow us to compute the posterior distribution of compositions of multiple functions giving rise to the observations. However, exact Bayesian inference is usually intractable for DGPs, motivating the use of various approximations. We show that the simplifying assumptions for a common type of Variational inference approximation imply that all but one layer of a DGP collapse to a deterministic transformation. We argue that such an inference scheme is suboptimal, not taking advantage of the potential of the model to discover the compositional structure in the data, and propose possible modifications addressing this issue. 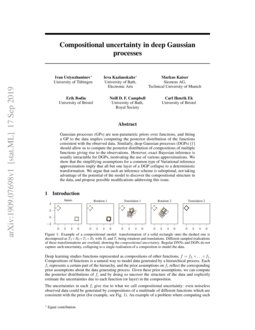 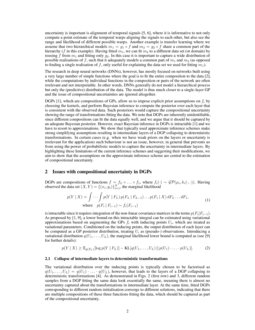 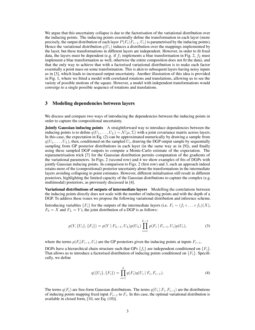 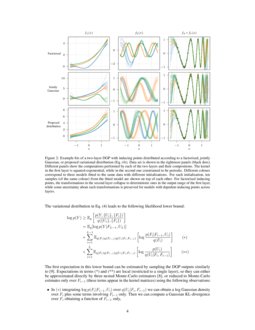 and by doing so uncover the structure of the data and explicitly estimate the uncertainties due to each function (or layer) in the composition.

The uncertainties in each fi give rise to what we call compositional uncertainty: even noiseless observed data could be generated by compositions of a multitude of different functions which are consistent with the prior (for example, see Fig. 1). An example of a problem where computing such uncertainty is important is alignment of temporal signals Kaiser:2018 ; Kazlauskaite:2019

, where it is informative to not only compute a point estimate of the temporal warps aligning the signals to each other, but also see the range and likelihood of different possible warps. Another example is transfer learning where we assume that two hierarchical models

m1=g1∘f and m2=g2∘f share a common part of the hierarchy (f in this example). Having fitted m1, we can fit m2 to a different data set (or domain) by reusing f from m1 and fitting only g2. In this case it is important to capture a wide distribution of possible realisations of f, such that it adequately models a common part of m1 and m2 (as opposed to finding a single realisation of f, only useful for explaining the data set we used for fitting m1).

The research in deep neural networks (DNNs), however, has mostly focused on networks built using a very large number of simple functions where the goal is to fit the entire composition to the data

Gal:2016 , while the computations by individual functions in the composition or parts of the network are often irrelevant and not interpretable. In other words, DNNs generally do not model a hierarchical process but only the (predictive) distribution of the data. The model is thus much closer to a single-layer GP and the issue of compositional uncertainties are ignored altogether.

DGPs Damianou:2013 , which are compositions of GPs, allow us to impose explicit prior assumptions on fi by choosing the kernels, and perform Bayesian inference to compute the posterior over each layer that is consistent with the observed data. Such posteriors would capture the compositional uncertainty showing the range of transformations fitting the data. We note that DGPs are inherently unidentifiable, since different compositions can fit the data equally well, and we argue that it should be captured by an adequate Bayesian posterior. However, exact Bayesian inference in DGPs is intractable Damianou:2013 and we have to resort to approximations. We show that typically used approximate inference schemes make strong simplifying assumptions resulting in intermediate layers of a DGP collapsing to deterministic transformations. In certain cases (e.g. when we have weak priors on the layers or uncertainty is irrelevant for the application) such behaviour is not an issue, however, in general that prevents us from using the power of probabilistic models to capture the uncertainty in intermediate layers. By highlighting these limitations of the current inference schemes and suggesting their modifications, we aim to show that the assumptions on the approximate inference scheme are central to the estimation of compositional uncertainty.

2 Issues with compositional uncertainty in DGPs

is intractable since it requires integration of the non-linear covariance matrices in the terms p(Fi|Fi−1). As proposed by Damianou:2013 ; Salimbeni:2017 , a lower bound on this intractable integral can be estimated using variational approximations based on augmenting the GPs fi with inducing points Ui, which are treated as variational parameters. Conditioned on the inducing points, the output distribution of each layer can be computed as a GP posterior distribution, treating Ui as (pseudo-) observations. Introducing a variational distribution q(U1,…,UL), the marginal likelihood lower bound is computed as (see Salimbeni:2017 for further details):

The variational distribution over the inducing points is typically chosen to be factorised as q(U1,…,UL)=q(U1)⋅…⋅q(UL), however, that leads to the layers of a DGP collapsing to deterministic transformations Havasi:2018 . As demonstrated in Figs. 2 (first row) and 3, different random samples from a DGP fitting the same data look essentially the same, meaning there is almost no uncertainty captured about the transformations in intermediate layer. At the same time, fitted DGPs corresponding to different random initialisation converge to different solutions, indicating that there are multiple compositions of these three functions fitting the data, which should be captured as part of the compositional uncertainty.

We discuss and compare two ways of introducing the dependencies between the inducing points in order to capture the compositional uncertainty.

A straightforward way to introduce dependencies between the inducing points is to define q(U1,…,UL)∼N(μ,Σ) with a joint covariance matrix across layers. In this case, the expectation in Eq. (2) can be approximated numerically by drawing a sample from q(U1,…,UL), then, conditioned on the sampled Ui, drawing the DGP output sample by sequentially sampling from GP posterior distributions in each layer (in the same way as in Salimbeni:2017 ), and finally using these sampled DGP outputs to compute a Monte-Carlo estimate of the expectation. The reparametrisation trick Kingma:2013

for the Gaussian distribution permits computation of the gradients of the variational parameters. In Figs.

2 (second row) and 4 we show examples of fits of DGPs with jointly Gaussian inducing points. In comparison to Figs. 2 (first row) and 3, such an approach indeed retains more of the (compositional) posterior uncertainty about the transformations in the intermediate layers avoiding collapsing to point estimates. However, different initialisation still result in different posteriors, highlighting the limited capacity of the Gaussian distributions to capture the complex (e.g. multimodal) posteriors, as previously discussed in Havasi:2018 .

Modelling the correlations between the inducing points directly does not scale with the number of inducing points and with the depth of a DGP. To address these issues we propose the following variational distribution and inference scheme.

Introducing variables {Fi} for the outputs of the intermediate layers (i.e. Fi∼(fi∘…∘f1)(X), F0=X and FL=Y

), the joint distribution of a DGP is as follows:

where the terms p(Fi|Fi−1,Ui) are the GP posteriors given the inducing points at inputs Fi−1.

The terms q(Fi) are free-form Gaussian distributions. The terms q(Ui|Fi,Fi−1) are the distributions of inducing points mapping fixed input Fi−1 to Fi. In this case, the optimal variational distribution is available in closed form, (Titsias:2009, , see Eq. (10)).

The variational distribution in Eq. (4) leads to the following likelihood lower bound:

The first expectation in this lower bound can be estimated by sampling the DGP outputs similarly to Salimbeni:2017 . Expectations in terms (*) and (**) are local (restricted to a single layer), so they can either be approximated directly by three nested Monte-Carlo estimators Rainforth:2018 , or reduced to Monte-Carlo estimates only over Fi−1 (these terms appear in the kernel matrices) using the following observations: