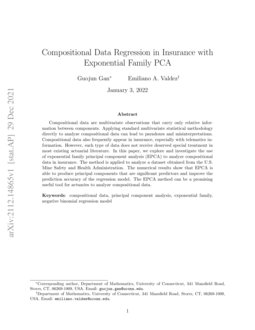 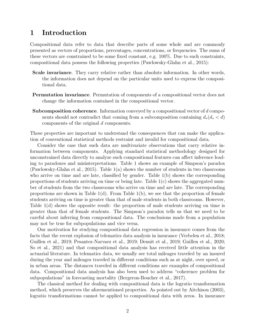 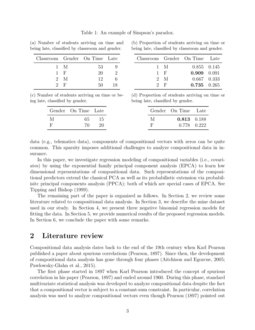 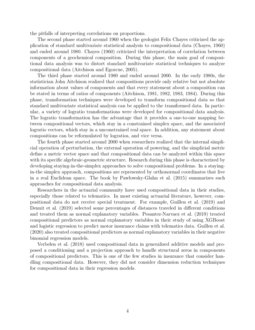 A data table which is arranged according to two factors can often be con...
Julie Rendlová, et al. ∙

A causal view on compositional data

A Guideline for the Statistical Analysis of Compositional Data in Immunology

Compositional data refer to data that describe parts of some whole and are commonly presented as vectors of proportions, percentages, concentrations, or frequencies. The sums of these vectors are constrained to be some fixed constant, e.g. 100%. Due to such constraints, compositional data possess the following properties

Scale invariance. They carry relative rather than absolute information. In other words, the information does not depend on the particular units used to express the compositional data.

These properties are important to understand the consequences that can make the application of conventional statistical methods restraint and invalid for compositional data.

Consider the case that such data are multivariate observations that carry relative information between components. Applying standard statistical methodology designed for unconstrained data directly to analyze such compositional features can affect inference leading to paradoxes and misinterpretations. Table 1 shows an example of Simpson’s paradox (Pawlowsky-Glahn et al., 2015). Table 1(a)

shows the number of students in two classrooms who arrive on time and are late, classified by gender. Table

In this paper, we investigate regression modeling of compositional variables (i.e., covariates) by using the exponential family principal component analysis (EPCA) to learn low dimensional representations of compositional data. Such representations of the compositional predictors extend the classical PCA as well as its probabilistic extension via probabilisitc principal components analysis (PPCA); both of which are special cases of EPCA. See Tipping and Bishop (1999).

The third phase started around 1980 and ended around 2000. In the early 1980s, the statistician John Aitchison realized that compositions provide only relative but not absolute information about values of components and that every statement about a composition can be stated in terms of ratios of components (Aitchison, 1981, 1982, 1983, 1984). During this phase, transformation techniques were developed to transform compositional data so that standard multivariate statistical analysis can be applied to the transformed data. In particular, a variety of logratio transformations were developed for compositional data analysis. The logratio transformation has the advantage that it provides a one-to-one mapping between compositional vectors, which stay in a constrained simplex space, and the associated logratio vectors, which stay in a unconstrained real space. In addition, any statement about compositions can be reformulated by logratios, and vice versa.

The fourth phase started around 2000 when researchers realized that the internal simplicial operation of perturbation, the external operation of powering, and the simplicial metric define a metric vector space and that compositional data can be analyzed within this space with its specific algebraic-geometric structure. Research during this phase is characterized by developing staying-in-the-simplex approaches to solve compositional problems. In a staying-in-the simplex approach, compositions are represented by orthonormal coordinates that live in a real Euclidean space. The book by Pawlowsky-Glahn et al. (2015) summarizes such approaches for compositional data analysis.

Researchers in the actuarial community have used compositional data in their studies, especially those related to telematics. In most existing actuarial literature, however, compositional data do not receive special treatment. For example, Guillen et al. (2019) and Denuit et al. (2019) selected some percentages of distances traveled in different conditions and treated them as normal explanatory variables. Pesantez-Narvaez et al. (2019)

3 Description of the data

We use a dataset from the U.S. Mine Safety and Health Administration (MSHA) from 2013 to 2016. The dataset was used in the Predictive Analytics exam administrated by the Society of Actuaries in December 2018 111The dataset is available at https://www.soa.org/globalassets/assets/files/edu/2018/2018-12-exam-pa-data-file.zip.. This dataset contains 53,746 observations described by 20 variables, including compositional variables. Table 2 shows the 20 variables and their descriptions. Among the 20 variables, 10 of them (i.e., the proportion of employee hours in different categories) are compositional components.

In our study, we ignore the following variables: YEAR, US_STATE, COMMODITY, PRIMARY, SEAM_HEIGHT, MINE_STATUS, and EMP_HRS_TOTAL. We do not use YEAR in our regression models as we do not study the temporal effect of the data. However, we use YEAR to split the data into a training set and a test set. The variables COMMODITY, PRIMARY, and SEAM_HEIGHT are related to the variable TYPE_OF_MINE, which we will use in our models. The variable EMP_HRS_TOTAL is highly correlated to the variable AVG_EMP_TOTAL with a correlation coefficient of 0.9942. We use only one of them in our models.

Figure 0(a) shows the proportions of employee hours in different categories from the first ten observations. Figure 0(b) shows the boxplots of the compositional variables. From the figures, we also see that the compositional variables have many zero values. Zeros in compositional data are irregular values. Pawlowsky-Glahn et al. (2015) discussed several strategies to handle such irregular values. One strategy is to replace zeros by small positive values. In the mine dataset, we can treat zeros as rounded zeros below a detection limit. In this paper, we replace zero components with 10−6, which corresponds to a detection limit of one hour among one million employee hours.

The classical method for dealing with compositional data is the logratio transformation method, which preserves the aforementioned properties. Let X={x1,…,xn} be a compositional dataset with n compositional vectors. These vectors are assumed to be contained in the simplex:

The logratio transformation method transforms the data from the simplex to the real Euclidean space (Aitchison, 1994)

Let x be a column vector (i.e., a d×1 vector). The CLR transformation is defined as:

The ILR transformation involves an orthogonal coordinate system in the simplex and is defined as:

where R is a (d−1)×d matrix that satisfies the following conditions:

The matrix R is called the contrast matrix (Pawlowsky-Glahn et al., 2015). The CLR and ILR transformations have the following relationship:

All three logratio transformation methods are equivalent up to linear transformations. The ALR transformation does not preserve distances. The CLR method preserves distances but can lead to singular covariance matrices. The IRL methods avoids these drawbacks. However, it is challenging to interpret the resulting coordinates.

We consider a dataset X=(x1,…,xn) consisting of n numerical vectors, each of which consists of d components. For notation purpose, we assume all vectors are column vectors and X is a d×n matrix.

that minimize the following loss function:

where ai is the ith column of A and Dφ denotes the Bregman divergence:

For a distribution in the exponential family, the conditional probability of a value

x given a parameter value θ has the following form:

where P0(x) is a function of x only, θ is the natural parameter of the distribution, and G(θ) is a function of θ that ensures that P(x|θ) is a density function. The negative log-likelihood function of the exponential family can be expressed through a Bregman divergence. To see this, let F be a function defined by

The EPCA method aims to find matrices A∈Rl×n and V∈Rl×d with VVT=Il that minimize the following loss function:

In other words, the EPCA method tries to find a lower dimensional subspace of parameter space to approximate the original data. The matrix V contains l basis vectors of Rd and θi=(θ1i,θ2i,…,θdi)T

is represented as a linear combination of the basis vectors. The traditional PCA is a special case of EPCA when the normal distribution is appropriate for the data. In this case,

where Dexp(⋅,⋅) is the Bregman divergence corresponding to the exp(⋅) function. Avalos et al. (2018) also proposed an optimization procedure to find A and V such that the loss function is minimized.

Compositional data in regression models refer to a set of predictor variables that describe parts of some whole and are commonly presented as vectors of proportions, percentages, concentrations, or frequencies.

where β0 is a real intercept and ⟨⋅,⋅⟩a is the Aitchison inner product defined by

Here g(⋅) denotes the geometric mean. The sum of squared errors is given by:

which suggests that the actual fitting can be done using the IRL transformed coordinates, that is, a linear regression can be simply fitted to the response as a linear function of ilr(x). The CLR transformation should not be used because it requires the generalized inversion of singular matrices.

NUM_INJURIES are 0.4705 and 5.4636, respectively. In this study, we use negative binomial models as they provide more flexibility than Poisson models.

Let x1, x2, ⋯, xn denote the predictors from n observations. The predictors can be selected in different ways. For example, the predictors can be the IRL transformed data or the principle components produced by a dimension reduction method such as the traditional PCA and the EPCA methods. For i=1,2,…,n, let yi be the response corresponding to xi

where r>0 and p∈(0,1) are parameters. The mean and the variance of a variable y are given by

To incorporate covariates in a negative binomial regression model, we let the parameter p to vary by observation. In particular, we incorporate the covariates as follows:

where r and β

are parameters to be estimated, and

Ei is the exposure. For the mine dataset, we use the variable AVG_EMP_TOTAL as the exposure. This is similar to model the number of claims in a Property & Casualty dataset where the time to maturity of an auto insurance policy is used as the exposure (Frees, 2009; Gan and Valdez, 2018). The method of maximum likelihood can be used to estimate the parameters.

In this section, we present the results of fitting the three negative binomial regression models (see Table 7) to the mine dataset. We follow the following procedure to fit and test the models:

To measure the accuracy of regression models for count variables, it is common to use the Pearson’s chi-square statistic, which is defined as:

where I is an indicator function. The predicted number of mines that have j injuries is calculated as follows:

where ^r and ^pi are estimated values of the parameters.

From Figure 2, we see that the maximum observed number of injuries is 86. To calculate the validation measure, we use m=99, that is, we use the first 100 terms of Ojs and Ejs. The remaining terms are too close to zero and will be ignored.

The regression coefficients of the ILR transformed variables V1 to V9 shown in Table 9 vary a lot. It is challenging to interpret those coefficients. From the P values shown in Table 9(a), we see that some of the IRL transformed variables are not significant. For example, the variable V5 has a P value of 0.9652 and the variable V7 has a P value of 0.1649. Both variables have a P value greater than 0.1. This suggests that it is appropriate to reduce the dimensionality of the compositional variables.

Compositional data are commonly presented as vectors of proportions, percentages, concentrations, or frequencies. A peculiarity of these vectors is that their sum is constrained to be some fixed constant, e.g. 100%. Due to such constraints, compositional data have the following properties: they carry only relative information (scale invariance); equivalent results should be yielded when the ordering of the parts in the composition is changed (permutation invariance); and results should not change if a noninformative part is removed (subcomposition coherence).

Guojun Gan and Emiliano A. Valdez would like to acknowledge the financial support provided by the Committee on Knowledge Extension Research of the Casualty Actuarial Society (CAS).