The well-known Caputo fractional derivative and the corresponding Caputo fractional integral occur naturally in many equations that model physical phenomena under inhomogeneous media. The relationship between the two fractional terms can be readily obtained by applying the Laplace transform to a given equation. We seek to numerically approximate Caputo fractional integrals using a Taylor series expansion for convolution integrals. This naturally extends into being able to approximate convolution integrals for a wider class of convolution integral kernels K(t-s). One of the main advantages under this approach is the ability to numerically approximate weakly singular kernels, which fail to converge under traditional quadrature methods. We provide stability and convergence analysis for these composite quadratures, which offer optimal convergence for approximating functions in C^γ[0,T], where α≤γ≤ 5 and 0<α < 1. For the order γ = 1,2,3,4,5 scheme, the resulting approximation is O(τ^γ) accurate, where τ is the size of the partition of the time domain. By instead utilizing a fractional Taylor series expansion, we are able to obtain for γ∈ (0,5)-{1,2,3,4} order scheme, which yields an approximation of O(τ^γ) with a constant dependent on the kernel function which improves the order of convergence. This allows for a far wider class of functions to be approximated, and by strengthening the regularity assumption, we are able to obtain more accurate results. General convolution integrals exhibit these results up to γ = 2 without the assumption of K being decreasing. Finally, some numerical examples are presented, which validate our findings. 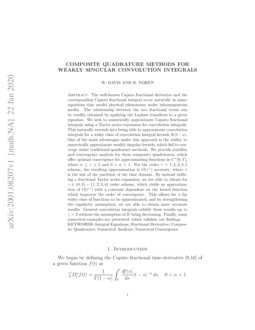 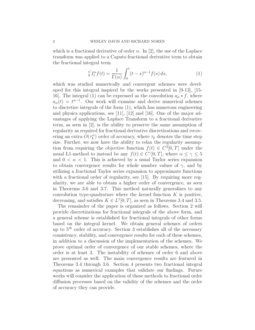 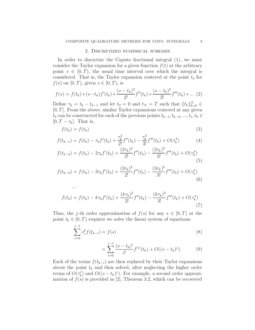 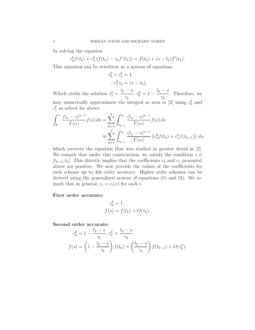 The paper is devoted to the approximate solutions of the Fredholm integr...
Vitalii Makogin, et al. ∙

We propose an accurate algorithm for a novel sum-of-exponentials (SOE) a...
Zixuan Gao, et al. ∙

The time fractional ODEs are equivalent to the convolutional Volterra in...
Lei Li, et al. ∙

Estimates on translations and Taylor expansions in fractional Sobolev spaces

We begin by defining the Caputo fractional time-derivative [9,10] of a given function f(t) as

which was studied numerically and convergent schemes were developed for this integral inspired by the works presented in [9-13], [15-16]. The integral (1) can be expressed as the convolution aα∗f, where aα(t)=tα−1. Our work will examine and derive numerical schemes to discretize integrals of the form (1), which has numerous engineering and physics applications, see [11], [12] and [16]. One of the major advantages of applying the Laplace Transform to a fractional derivative term, as seen in [2], is the ability to preserve the same assumption of regularity as required for fractional derivative discretizations and recovering an extra O(ταk) order of accuracy, where τk denotes the time step size. Further, we now have the ability to relax the regularity assumption from requiring the objective function f(t)∈C2[0,T] under the usual L1-method to instead be any f(t)∈Cγ[0,T], where α≤γ≤5 and 0<α<1. This is achieved by a usual Taylor series expansion to obtain convergence results for whole number values of γ, and by utilizing a fractional Taylor series expansion to approximate functions with a fractional order of regularity, see [15]. By requiring more regularity, we are able to obtain a higher order of convergence, as seen in Theorems 3.6 and 3.7. This method naturally generalizes to any convolution type-quadrature where the kernel function K is positive, decreasing, and satisfies K∈L1[0,T], as seen in Theorems 3.4 and 3.5.

The remainder of the paper is organized as follows. Section 2 will provide discretizations for fractional integrals of the above form, and a general scheme is established for fractional integrals of other forms based on the integral kernel. We obtain general schemes of orders up to 5th order of accuracy. Section 3 establishes all of the necessary consistency, stability, and convergence results for each of these schemes, in addition to a discussion of the implementation of the schemes. We prove optimal order of convergence of our stable schemes, where the order is at least 3. The instability of schemes of order 6 and above are presented as well. The main convergence results are featured in Theorems 3.4 through 3.6. Section 4 presents two fractional integral equations as numerical examples that validate our findings. Future works will consider the application of these methods to fractional order diffusion processes based on the validity of the schemes and the order of accuracy they can provide.

In order to discretize the Caputo fractional integral (1), we must consider the Taylor expansion for a given function f(t) at the arbitrary point s∈[0,T), the usual time interval over which the integral is considered. That is, the Taylor expansion centered at the point tk for f(s) on [0,T), given s∈[0,T), is

Thus, the j-th order approximation of f(s) for any s∈[0,T) at the point tk∈[0,T) requires we solve the linear system of equations:

Each of the terms f(tk−i) are then replaced by their Taylor expansions about the point tk and then solved, after neglecting the higher order terms of O(τjk) and O((s−tk)j). For example, a second order approximation of f(s) is provided in [2], Theorem 3.2, which can be recovered by solving the equation

This equation can be rewritten as a system of equations

Which yields the solution ck1=tk−sτk, ck0=1−tk−sτk. Therefore, we may numerically approximate the integral as seen in [2] using ck0 and ck1 as solved for above:

which recovers the equation that was studied in greater detail in [2]. We remark that under this construction, we satisfy the condition s∈[tk−1,tk]. This directly implies that the coefficients c0 and c1 presented above are positive. We now provide the values of the coefficients for each scheme up to 4th order accuracy. Higher order schemes can be derived using the generalized system of equations (8) and (9). We remark that in general, ci=ci(s) for each i. First order accurate:

We present the generalized equation to solve for a n-th order accurate approximation to f(s). The above equations may be rewritten by the matrix equation

where VTτk is the Vandermonde matrix with each xn expressed in terms of τk as above, and

The following lemma asserts the existence of any general n-th order numerical scheme. Since we have

provided that τk>0 which directly implies that the matrix VTτk is invertible under this condition. The following lemma is immediate from the above.

We now compute the unique solution based on the previous lemma. From [14], we can establish the generalized inverse of the Vandermonde matrix.

From Lemma 2.1, we may invert the matrix VTτk to obtain the solution

so we may solve component-wise to find each entry of →cn=[cj], 1≤j≤n, from

By utilizing the fractional Taylor series expansion instead for f(s) on [0,T), as discussed in [15], we may obtain similar results to those outlined in Theorem 2.2. This can further relax the regularity assumption to f(s)∈Cα[0,T].

Using the fractional Taylor series expansion, we can assert that we have an α order scheme defined by the following: α order accurate:

We now examine the consistency, stability, and convergence of these schemes based on the generalized scheme

We motivate our discussion of stability by examining the results presented in [1]. The quadrature studied in [1] is of the form

which provides the error estimate given

We will directly compare these results to the ones established in the previous section to prove stability and assert convergence. Our goal is to decompose the integrand into a convolution integral ϕ(s)=K(tn−s)f(s), where we may relax the continuity assumptions on the kernel function K(tn−s). This goal is motivated in part from the results obtained in [2], where we seek a generalization for the integral kernel. We begin by recalling some basic definitions for quadrature methods. From (1.15) of [1], a quadrature method is said to be consistent if it satisfies

for the global quadrature of the integral (16). We will relate (16) and a generalization of the results provided in [2].

By utilizing the taylor expansion for f(s) about the point tk, we may readily obtain a similar quadrature rule by using Theorem 2.2 and the definition of each cj(s) defined in (12). By further remarking that for each s∈[tk−1,tk], then we may write O((s−tk)γ)=O(ϵ). Thus,

we arrive at the conclusion. ∎

The following remark is a natural extension of the first lemma, which allows for direct comparison to prove stability using the Theorem 3.7 in [1].

By expanding the series

and by collecting all of the repeating terms for each f(tk−j), we may condense the double summation into a single summation term

where we note that w00=0 to satisfy the previous lemma. Further, by defining for fixed γ>0

From the consistency requirement in [1], we must show that the scheme (25) satisfies any time step τ>0

From (11), the first equation in the Vandermonde matrix requires ∑γ−1j=0ckj(s)=1, hence,

On the other hand, by relabelling the coefficients of (26) and by noting that kτ=tk,

Since each wn−k is arbitrary under this construction, we select wn−k to satisfy ∑nk=0wk=n. Thus, we have for the scheme (25)

hence the scheme (25) is consistent. For simplicity and for implementation, we take wk=1 for each k to trivially satisfy these conditions since w00=w0=0. ∎

We must further satisfy stability requirements in order to prove the convergence of these schemes for any order γ>0. From [1], we have the following theorem asserting stability under arbitrary quadrature rules:

We remark that under these results, we must simply satisfy the requirement that each ~wγk≥0 in (25) to satisfy a similar stability criterion for this generalized quadrature. This leads immediately to two stability results:

We require additional assumptions on the integral kernel K(s) to ensure that the scheme is stable in the case where the order of approximation to (25) is any order 2<γ≤5.

Let K(s) be a positive, nonincreasing kernel on [0,T] and let τk>0 for all k. The approximation scheme (25) is stable for any 2<γ≤5 order of accuracy.