Model misspecification can create significant challenges for the implementation of probabilistic models, and this has led to development of a range of inference methods which directly account for this issue. However, whether these more involved methods are required will depend on whether the model is really misspecified, and there is a lack of generally applicable methods to answer this question. One set of tools which can help are goodness-of-fit tests, where we test whether a dataset could have been generated by a fixed distribution. Kernel-based tests have been developed to for this problem, and these are popular due to their flexibility, strong theoretical guarantees and ease of implementation in a wide range of scenarios. In this paper, we extend this line of work to the more challenging composite goodness-of-fit problem, where we are instead interested in whether the data comes from any distribution in some parametric family. This is equivalent to testing whether a parametric model is well-specified for the data. 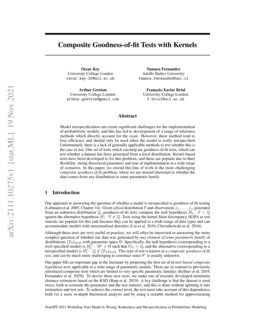 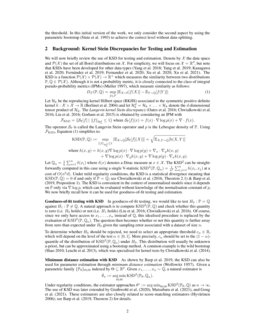 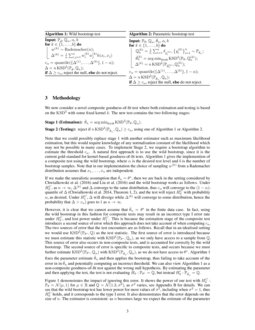 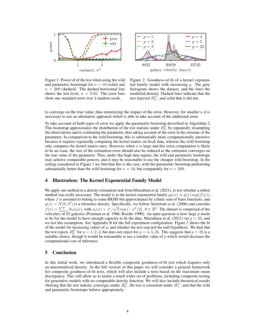 Smooths Tests of Goodness-of-fit for the Newcomb-Benford distribution

On the Optimality of Kernel-Embedding Based Goodness-of-Fit Tests

One approach to answering the question of whether a model is misspecified is goodness-of-fit testing [Chapter 14]lehmann-testing-statistical-hypotheses. Given a

H0:P=Q against the alternative hypothesis H1:P≠Q. Tests using the ksd as test statistic are popular for this task because they can be applied to a wide-range of data types and can accommodate models with unnormalised densities liu-ksd-goodness-of-fit,chwialkowski-kernel-goodness-fit.

Although these tests are very useful in practice, we will often be interested in answering the more complex question of whether our data was generated by any element of some parametric family of distributions {Pθ}θ∈Θ with parameter space Θ. Specifically, the null hypothesis (corresponding to a well-specified model) is HC0:∃θ∗∈Θ such that Pθ∗=Q, and the alternative (corresponding to a misspecified model) is HC1:Q∉{Pθ}θ∈Θ. This type of test is known as a composite goodness-of-fit test, and can be much more challenging to construct since θ∗ is usually unknown.

Our paper fills an important gap in the literature by proposing the first set of kernel-based composite hypothesis tests applicable to a wide range of parametric models. These are in contrast to previously introduced composite tests which are limited to very specific parametric families kellnerOnesampleTestNormality,fernandezKernelizedSteinDiscrepancy. To devise these new tests, we make use of recently developed minimum distance estimators based on the ksd barpMinimumSteinDiscrepancy. A key challenge is that the dataset is used twice, both to estimate the parameter and the test statistic, and this is done without splitting it into estimation and test sets. To achieve the correct level, the test must take account of this dependence, both via a more in-depth theoretical analysis and by using a suitable method for approximating the threshold. In this initial version of the work, we only consider the second aspect by using the parametric bootstrap stuteBootstrapBasedGoodnessoffittests to achieve the correct level without data-splitting.

We will now briefly review the use of ksd for testing and estimation. Denote by X the data space and P(X) the set of all Borel distributions on X. For simplicity, we will focus on X=Rd, but note that ksds have been developed for other data types Yang2018,Yang2019,kanagawaKernelSteinTest,Fernandez2019,fernandezKernelizedSteinDiscrepancy,Xu2020directional,Xu2021. The ksd is a function P(X)×P(X)→R+ which measures the similarity between two distributions P,Q∈P(X). Although it is not a probability metric, it is closely connected to the class of ipm Muller1997, which measure similarity as follows:

Let Hk be the rkhs associated to the symmetric positive definite kernel k:X×X→R Berlinet2004 and let Hdk=Hk×…×Hk denote the d

Hk. The Langevin kernel Stein discrepancy oates-control-functionals,chwialkowski-kernel-goodness-fit,liu-ksd-goodness-of-fit,gorham-sample-quality-stein is obtained by considering an ipm with

The operator SP is called the Langevin Stein operator and p is the Lebesgue density of P. Using FKSD, Equation 1 simplifies to:

Let Qn=1n∑ni=1δ(xi) where δ(x) denotes a Dirac measure at x∈X. The ksd2 can be straightforwardly computed in this case using a single V-statistic KSD2(P,Qn)=1n2∑ni,j=1h(xi,xj) at a cost of O(n2d). Under mild regularity conditions, the ksd is a statistical divergence meaning that KSD(P,Q)=0 if and only if P=Q; see [Theorem 2.1]chwialkowski-kernel-goodness-fit & [Proposition 1]barpMinimumSteinDiscrepancy. The ksd is convenient in the context of unnormalised models since it depends on P only via ∇logp, which can be evaluated without knowledge of the normalisation constant of p. We now briefly recall how it can be used for goodness-of-fit testing and estimation.

In goodness-of-fit testing, we would like to test H0:P=Q against H1:P≠Q. A natural approach is to compute KSD2(P,Q) and check whether this quantity is zero (i.e. H0 holds) or not (i.e. H1 holds) liu-ksd-goodness-of-fit,chwialkowski-kernel-goodness-fit. Of course, since we only have access to x1,…,xn instead of Q, this idealised procedure is replaced by the evaluation of KSD2(P,Qn). The question then becomes whether or not this quantity is further away from zero than expected under H0 given the sampling error associated with a dataset of size n.

To determine whether H0 should be rejected, we need to select an appropriate threshold cα∈R, which will depend on the level of the test α∈[0,1]. More precisely, cα should be set to the (1−α)

-quantile of the distribution of

KSD2(P,Qn) under H0. This distribution will usually be unknown a-priori, but can be approximated using a bootstrap method. A common example is the wild bootstrap shao-dependent-wild-bootstrap,leucht-dep-wild-bootstrap, which was specialised for kernel tests by chwialkowski-wild-bootstrap-kernel-tests.

As shown by barpMinimumSteinDiscrepancy, the ksd can also be used for parameter estimation through minimum distance estimation Wolfowitz1957. Given a parametric family {Pθ}θ∈Θ indexed by Θ⊆Rp. Given x1,…,xn∼Q, a natural estimator is

Under regularity conditions, the estimator approaches θ∗:=argminθ∈ΘKSD2(Pθ,Q) as n→∞. The use of ksd was later extended by Grathwohl2020,matsubaraRobustGeneralisedBayesian,Gong2020. These estimators are also closely related to score-matching estimators Hyvarinen2006; see [Theorem 2]barpMinimumSteinDiscrepancy for details.

We now consider a novel composite goodness-of-fit test where both estimation and testing is based on the KSD2 with some fixed kernel k. The new test contains the two following stages:

reject if nKSD2(P^θn,Qn)≥cα, using one of Algorithm 1 or Algorithm 2.

Note that we could possibly replace stage 1 with another estimator such as maximum likelihood estimation, but this would require knowledge of any normalisation constant of the likelihood which may not be possible in many cases. To implement Stage 2, we require a bootstrap algorithm to estimate the threshold cα. A natural first approach is to use the wild bootstrap, since it is the current gold-standard for kernel-based goodness-of-fit tests. Algorithm 1 gives the implemention of a composite test using the wild bootstrap, where α is the desired test level and b is the number of bootstrap samples. Note that in our implementation the choice of sampling w(k) from a Rademacher distribution assumes that x1,…,xn are independent.

If we make the unrealistic assumption that ^θn=θ∗, then we are back in the setting considered by chwialkowski-kernel-goodness-fit,liu-ksd-goodness-of-fit and the wild bootstrap works as follows. Under HC0, as n→∞, Δ(k) and Δ converge to the same distribution, thus cα will converge to the (1−α)-quantile of Δ [Theorem 1,2]chwialkowski-wild-bootstrap-kernel-tests, and the test will reject HC0 with probability α, as desired. Under HC1, Δ will diverge while Δ(k) will converge to some distribution, hence the probability that Δ>cα) goes to 1 as n→∞.

However, it is clear that we cannot assume that ^θn=θ∗

in the finite data case. In fact, using the wild bootstrap in this fashion for composite tests may result in an incorrect type I error rate under

HC0, and lost power under HC1. This is because the estimation stage of the composite test introduces a second source of error which this approach does not take account of when computing cα. The two sources of error that the test encounters are as follows. Recall that in an idealised setting we would use KSD2(Pθ∗,Q) as the test statistic. The first source of error is introduced because we must estimate this statistic with KSD2(Pθ∗,Qn), as we only have access to a sample from Q. This source of error also occurs in non-composite tests, and is accounted for correctly by the wild bootstrap. The second source of error is specific to composite tests, and occurs because we must further estimate KSD2(Pθ∗,Qn) with KSD2(P^θn,Qn), as we do not have access to θ∗. Algorithm 1 fixes the parameter estimate ^θn and then applies the bootstrap, thus failing to take account of the error in in ^θn and potentially computing an incorrect threshold. We can also view Algorithm 1 as a non-composite goodness-of-fit test against the wrong null hypothesis. By estimating the parameter and then applying the test, the test is not evaluating H0:Pθ∗=Q, but instead H′0:P^θn=Q.

Figure 2 demonstrates the impact of ignoring this error. It shows the power of our test with HC0:Pθ=N(μ,1) for μ∈R and Q=N(1.3,σ2), as σ2 varies, see Appendix B for details. We can see that the wild bootstrap test has lower power for most values of σ2, including when σ2=1, thus HC0 holds, and it corresponds to the type I error. It also demonstrates that the error depends on the size of n. The estimator is consistent: as n becomes large we expect the estimate of the parameter to converge on the true value, thus minimizing the impact of the error. However, for smaller n it is necessary to use an alternative approach which is able to take account of the additional error.

We apply our method to a density estimation task from matsubaraRobustGeneralisedBayesian, to test whether a robust method was really necessary. The model is in the kernel exponential family pθ(x)∝q(x)exp(f(x)), where f is assumed to belong to some RKHS but approximated by a finite sum of basis functions, and q(x)=N(0,32) is a reference density. Specifically, we follow steinwartExplicitDescriptionReproducing and consider f(x)=∑pi=1θiϕi(x), with ϕi(x)=xi/√i!exp(−x2/2),θ∈Rp. The dataset is comprised of the velocities of 82 galaxies postmanProbesLargescaleStructure, roederDensityEstimationConfidence. An open question is how large p needs to be for the model to have enough capacity to fit the data. matsubaraRobustGeneralisedBayesian set p=25, and we test this assumption. See Appendix B for the full experiment configuration. Figure 2 shows the fit of the model for increasing values of p, and whether the test rejected the null hypothesis. We find that the test rejects HC0 for p=1,2,3, but does not reject for p=4,5,25. This suggests that p=25 is a suitable choice, though it would be reasonable to use a smaller value of p which would decrease the computational cost of inference.

In this initial work, we introduced a flexible composite goodness-of-fit test which requires only an unnormalized density. In the full version of this paper we will consider a general framework for composite goodness-of-fit tests, which will also include a tests based on the maximum mean discrepancy. This will allow us to tackle a much wider set of problems, including composite testing for generative models with no computable density function. We will also include theoretical results showing that the test statistic converges under HC0, the test is consistent under HC1, and that the wild and parametric bootstraps behave appropriately.

The detailed derivation of this result can be found in [Appendix D3]barpMinimumSteinDiscrepancy or matsubaraRobustGeneralisedBayesian.

For each datapoint in the plot, the power is computed as follows:

We find the standard error to be sufficiently small that it is not visible in the figure.

We estimate only the mean, which we denote by θ

σ2, is known and specified by the null hypothesis. We use the closed-form KSD estimator as defined above, with

Following matsubaraRobustGeneralisedBayesian, we normalize the dataset by

We use the closed-form KSD estimator as defined above, with