Components and Cycles of Random Mappings

Each connected component of a mapping {1,2,...,n}→{1,2,...,n} contains a unique cycle. The largest such component can be studied probabilistically via either a delay differential equation or an inverse Laplace transform. The longest such cycle likewise admits two approaches: we find an (apparently new) density formula for its length. Implications of a constraint – that exactly one component exists – are also examined. For instance, the mean length of the longest cycle is (0.7824...)√(n) in general, but for the special case, it is (0.7978...)√(n), a difference of less than 2%. 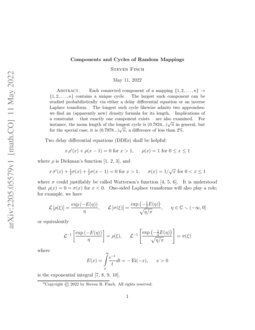 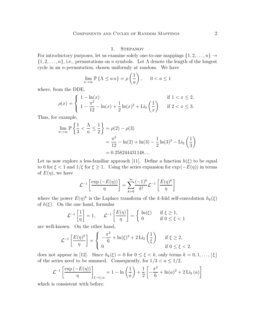 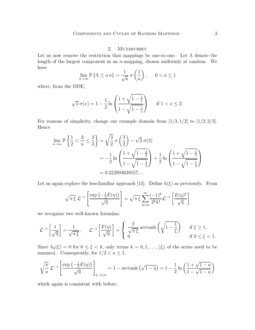 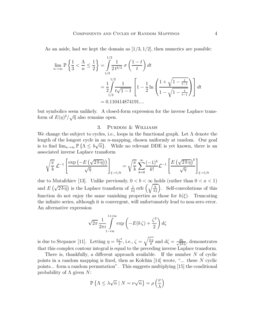 In [1] we used a cycle basis of the cycle space to represent a simple co...
Heping Jiang, et al. ∙

A cycle cover of a graph is a collection of cycles such that each edge o...
Robert Lukoťka, et al. ∙

We study the sequences generated by neuronal recurrence equations of the...
Renè Ndoundam, et al. ∙

On inverse product cannibalisation: a new Lotka-Volterra model for asymmetric competition in the ICTs

For introductory purposes, let us examine solely one-to-one mappings {1,2,…,n}→{1,2,…,n}, i.e., permutations on n symbols.  Let Λ denote the length of the longest cycle in an n-permutation, chosen uniformly at random.  We have

where, from the DDE,

where the power E(η)k is the Laplace transform of the k-fold self-convolution hk(ξ) of h(ξ).  On the one hand, formulas

are well-known.  On the other hand,

which is consistent with before.

Let us now remove the restriction that mappings be one-to-one.  Let Λ denote the length of the largest component in an n-mapping, chosen uniformly at random.  We have

where, from the DDE,

Let us again explore the less-familiar approach [13].  Define h(ξ) as previously.  From

which again is consistent with before.

We change the subject to cycles, i.e., loops in the functional graph. Let Λ denote the length of the longest cycle in an n-mapping, chosen uniformly at random.  Our goal is to find limn→∞P{Λ≤b√n}.  While no relevant DDE is yet known, there is an associated inverse Laplace transform

due to Mutafchiev [13].  Unlike previously, 0<b<∞ holds (rather than 0<a<1) and E(√2bη) is the Laplace transform of 12ξerfc(√b2ξ).  Self-convolutions of this function do not enjoy the same vanishing properties as those for h(ξ).  Truncating the infinite series, although it is convergent, will unfortunately lead to non-zero error.  An alternative expression

is due to Stepanov [11].  Letting η=bζ22, i.e., ζ=√2ηb and dζ=dη√2bη, demonstrates that this complex contour integral is equal to the preceding inverse Laplace transform.

There is, thankfully, a different approach available.  If the number N of cyclic points in a random mapping is fixed, then as Kolchin [14] wrote, “… these N cyclic points… form a random permutation”.  This suggests multiplying [15]

the conditional probability of

and then differentiating (with respect to λ) to obtain the joint density of (Λ,N):

where 0<λ<ν<∞.  We have not seen this formula in the literature: it is apparently new.  For r≥2, let Λr denote the length of the rth longest cycle in an n-mapping, chosen uniformly at random.  If the permutation has no rth cycle, then its rth longest cycle is defined to have length 0.  Define the rth generalized Dickman function ρr(ξ) to satisfy

E(Λhr).  We can easily verify their findings:

The mode of Λ1 occurs when

For Λ2, the mode is 0; we did not pursue the median. Another new asymptotic result is the cross-correlation between Λr and N:

Using formulas in [10, 20, 21], it is possible to similarly compute the cross-correlation between Λr and Λs where r<s.

A mapping is said to be connected (or indecomposable) if it possesses exactly one component.  This is a rare event, in the sense that

where M counts the components.  Let Λ denote the length of the unique cycle in a connected n-mapping, chosen uniformly at random.  Our goal is to find limn→∞P{Λ≤b√n} as before, but the circumstances are vastly simpler.  Rényi [22] proved that the limiting density (as n→∞) of Λ is

for 0<λ<∞, which implies immediately that

It is surprising that arbitrary mappings and connected mappings differ so little here (0.7824... versus 0.7978...).  We might have expected that uniqueness would carry more influence.

Of course, N=Λ when there is just one component.  Allowing instead m components, where m≥2 is a fixed integer, rarity persists [23, 24]

For arbitrary mappings, the expected number of components [25, 26] is ∼12ln(n).  If our constraint from Section 4 loosens so that m→∞ but so slowly that m/ln(n)→0, then Rényi’s formula still applies, as proved by Pavlov [24].  This leads us to a set of conjectural results comparable to those in Section 3.

Let Λ be the longest cycle length and N be the cyclic points total.  As before, a conditional probability coupled with the limiting density (as n→∞) of N:

suffice to give the joint density of (Λ,N):

and, again, it is possible to compute the cross-correlation between Λr and Λs where r<s.

Let anmℓ denote the number of n-mappings possessing exactly m components and exactly ℓ cyclic points, where n≥ℓ≥m≥2.  We have [33, 34, 35]

where τ(x)=xexp(τ(x)) is Cayley’s tree function.  The dominant singularity of τ(x) is at x=e−1 and

Differentiating with respect to y:

by the singularity analysis theorem of Flajolet & Odlyzko [36].  Multiplying both sides by n!/nn and using Stirling’s approximation, we obtain

Multiplying by n!/nn and via the preceding, we obtain

be a positive integer.  A random variable

X is m-divisible if it can be written as X=Y1+Y2+⋯+Ym, where Y1,Y2,…,Ym are independent and identically distributed. A random variable is infinitely divisible if it is m-divisible for every m.  We wish to study the allocation of X=N cyclic points among a fixed number m of components, given a constrained random mapping.  This would be a matter of determining the inverse Laplace transform of the mth root of

Pavlov’s work [24, 27] is crucial here.  We confront, however, a surprising theoretical obstacle: the half-normal density is provably not infinitely divisible [37, 38, 39].  The independence requirement fails, in fact, beginning at m=2.  Let us offer a plausibility argument supporting this latter assertion.

On the other hand, if no condition is placed on Y2, then the density of Y1+Y2=N is a convolution in the ξ-domain, which becomes multiplication in the η-domain.  Starting with [40, 41, 42]

and upper/lower bounds are tight approximations of the center for small/large values of η.  No closed-form expression for L−1[center] seems to be possible; L−1[lower bound] and L−1[upper bound] are

respectively.  Both expressions approach infinity as ξ→0+, tentatively implying that the density of Y1 is unbounded near the origin. This contrasts with the behavior described earlier, i.e., information about Y2 truly affects how Y1 is distributed.  Therefore Y1 and Y2 must be dependent.

When we employed the word “obstacle” before, it reflected our intention to study order statistics Z1=min{Y1,Y2} and Z2=max{Y1,Y2}, with a goal of understanding the allocation process (partioning N cyclic points into two cycles).  If Y1 and Y2 were independent with common density φ(y), then the joint density of Z1≤Z2 would simply be 2φ(z1)φ(z2) for z1≤z2.  Dependency renders the analysis more complicated.

As an aside, the Rayleigh density is also not infinitely divisible [39]. The independence requirement again fails beginning at m=2.  We argue as before, but less formally.  On the one hand, if Y2=0 is fixed, then the density of Y1 approaches 0 as ξ→0+.  On the other hand, if no condition is placed on Y2, then we wish to find the inverse Laplace transform of the square root of

A remarkably accurate approximation (with error less than 0.5%):

defies easy explanation and yet provides a very helpful estimate:

With the benefit of hindsight, we should have focused not on σ(x), but instead on

where θ>0 is fixed, and its associated Laplace transform is

It would be good someday to learn, from an interested reader, about possible random mapping-theoretic applications of g(x) for select θ∉{12,1,32,2,52,…}.

I am grateful to Ljuben Mutafchiev [13], Lennart Bondesson [43, 44] and Jeffrey Steif [45] for helpful discussions.  Vaclav Kotesovec provided relevant asymptotic expansions in [23].  The Mathematica routines NDSolve for DDEs [46] and NInverseLaplaceTransform [47] assisted in numerically confirming many results.  Interest in this subject has, for me, spanned many years [48, 49].