As a generalization of the traditional connectivity, the g-component edge connectivity cλg(G) of a non-complete graph G is the minimum number of edges to be deleted from the graph G such that the resulting graph has at least g components. Hypercube-like networks (HL-networks for short) are obtained by manipulating some pairs of edges in hypercubes, which contain several famous interconnection networks such as twisted cubes, Mobius cubes, crossed cubes, locally twisted cubes. In this paper, we determine the (g + 1)-component edge connectivity of the n-dimensional HL-networks. 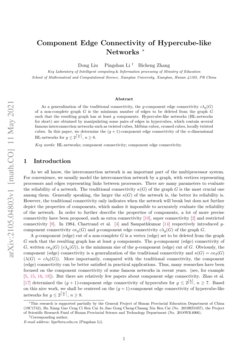 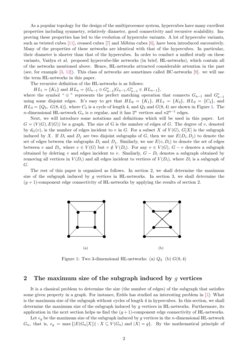 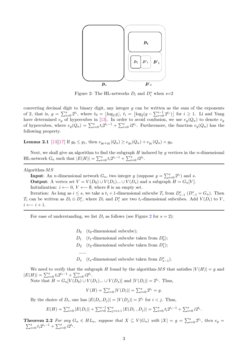 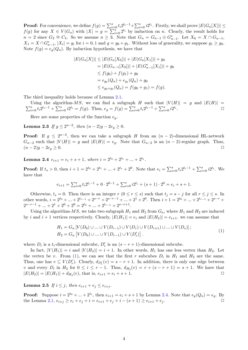 The ℓ-component connectivity (or ℓ-connectivity for short) of a graph G,...
Jou-Ming Chang, et al. ∙

Learning Connectivity of Neural Networks from a Topological Perspective

In this paper we first recall the definition of geometical model of the ...
Giovanna Citti, et al. ∙

Edge-connectivity is a classic measure for reliability of a network in t...
Huazhong Lü, et al. ∙

The neighbor connectivity of a graph G is the least number of vertices s...
Tomáš Dvořák, et al. ∙

As we all know, the interconnection network is an important part of the multiprocessor system. For convenience, we usually model the interconnection network by a graph, with vertices representing processors and edges representing links between processors. There are many parameters to evaluate the reliability of a network. The traditional connectivity κ(G) of the graph G is the most crucial one among them. Generally speaking, the larger the κ(G) of the network is, the better its reliability is. However, the traditional connectivity only indicates when the network will break but does not further depict the properties of components, which makes it impossible to accurately evaluate the reliability of the network. In order to further describe the properties of components, a lot of more precise connectivity have been proposed, such as extra connectivity [10], super connectivity [2] and restricted connectivity [8]. In 1984, Chartrand et al. [4] and Sampathkumar [14] respectively introduced g-component connectivity cκg(G) and g-component edge connectivity cλg(G) of the graph G.

As a popular topology for the design of the multiprocessor system, hypercubes have many excellent properties including symmetry, relatively diameter, good connectivity and recursive scalability. Improving these properties has led to the evolution of hypercube variants. A lot of hypercube variants, such as twisted cubes [11], crossed cubes [7] and M¨obius cubes [6], have been introduced successively. Many of the properties of these networks are identical with that of the hypercubes. In particular, their diameter is shorter than that of the hypercubes. In order to conduct a unified study on these variants, Vaidya et al. proposed hypercube-like networks (in brief, HL-networks), which contain all of the networks mentioned above. Hence, HL-networks attracted considerable attention in the past (see, for example [3, 12]). This class of networks are sometimes called BC-networks [9]. we will use the term HL-networks in this paper.

The recursive definition of the HL-networks is as follows:

Next, we will introduce some notations and definitions which will be used in this paper. Let G=(V(G),E(G)) be a graph. The size of G is the number of edges of G. The degree of v, denoted by dG(v), is the number of edges incident to v in G. For a subset X of V(G), G[X] is the subgraph induced by X. If Di and Dj are two disjoint subgraphs of G, then we use E(Di,Dj) to denote the set of edges between the subgraphs Di and Dj. Similarly, we use E(v,Di) to denote the set of edges between v and Di, where v∈V(G) but v∉V(Di). For any v∈V(G), G−v denotes a subgraph obtained by deleting v and edges incident to v. Similarly, G−Di denotes a subgraph obtained by removing all vertices in V(Di) and all edges incident to vertices of V(Di), where Di is a subgraph of G.

2 The maximum size of the subgraph induced by g vertices

Let eg be the maximum size of the subgraph induced by g vertices in the n-dimensional HL-network Gn, that is, eg= max{|E(Gn[X])|:X⊆V(Gn) and |X|=g}. By the mathematical principle of converting decimal digit to binary digit, any integer g can be written as the sum of the exponents of 2, that is, g=∑si=02ti, where t0=⌊log2g⌋, for i≥1. Li and Yang have determined eg of hypercubes in [13]. In order to avoid confusion, we use eg(Qn) to denote eg of hypercubes, where . Furthermore, the function eg(Qn) has the following property.

Next, we shall give an algorithm to find the subgraph H induced by g vertices in the n-dimensional HL-network Gn such that |E(H)|=∑si=0ti2ti−1+∑si=0i2ti.   Algorithm-MS

For ease of understanding, we list Di as follows (see Figure 2 for s=2):

The third inequality holds because of Lemma 2.1.

Here are some properties of the function eg.

In this section, we shall apply Theorem 2.2 to determine the (g+1)-component edge connectivity of HL-networks.

For any X⊆V(Gn), we use EX to denote a set of edges in which each edge has exactly one endpoint in X.

The last inequality holds, because ng−eg is strictly increasing (respect to g) for g≤2⌈n2⌉ by Lemma 3.1.

Then we find that