Complexity of the CNF-satisfiability problem 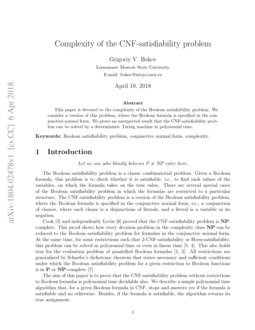 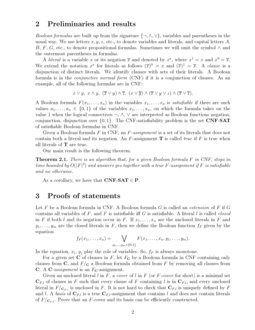 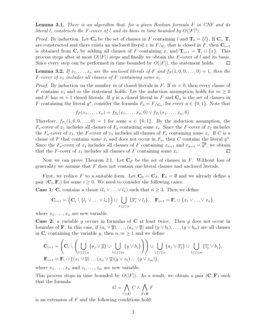 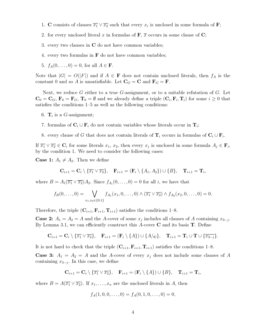 In this paper, a necessary and sufficient condition for satisfiability o...
Manoj Kumar, et al. ∙

This paper is devoted to the complexity of the quantified boolean formul...
Grigoriy V. Bokov, et al. ∙

CSAT is not in P

In this paper we have to demonstrate that if we claim to have an algorit...
Fabio Romano, et al. ∙

Complexity assessments for decidable fragments of Set Theory. III: A quadratic reduction of constraints over nested sets to Boolean formulae

A Critique of Kumar's "Necessary and Sufficient Condition for Satisfiability of a Boolean Formula in CNF and Its Implications on P versus NP problem."

In this paper, we analyze the argument made by Kumar in the technical re...
Michael C. Chavrimootoo, et al. ∙

The aim of this paper is to prove that the CNF-satisfiability problem without restrictions to Boolean formulas is polynomial-time decidable also. We describe a simple polynomial-time algorithm that, for a given Boolean formula in CNF, stops and answers yes if the formula is satisfiable and no otherwise. Besides, if the formula is satisfiable, the algorithm returns its true assignment.

A literal is a variable x or its negation ¯¯¯x and denoted by xa, where x1=x and x0=¯¯¯x. We assume that ¯¯¯¯¯¯x=x. A clause is a disjunction of distinct literals. We identify clauses with sets of their literals. A Boolean formula is in the conjunctive normal form (CNF) if it is a conjunction of clauses. As an example, all of the following formulas are in CNF:

There is an algorithm that, for a given Boolean formula F in CNF, stops in time bounded by O(|F|4) and answers yes together with a true F-assignment if F is satisfiable and no otherwise.

As a corollary, we have that CNF-SAT∈P, where P is the class of sets of strings recognizable by a deterministic Turing machine in time bounded by a polynomial in the length of the input.

Define SF(z)=S|F|F(z) and CF(z)=[SF(z)]F, where |F| is the number of symbols contained in F. As an example, consider the following Boolean formula in CNF

for all literal u of F.

A literal z is called redundant in F if [{¯¯¯z}]F⊆CF(z). We call F reduced if it does not contain redundant literals. Denote by ρz(F) the Boolean formula in CNF obtained from F by removing all clauses from CF(z). Prove auxiliary lemmas.

If F is reduced, then F is satisfiable iff F does not contain clauses.

By induction on the number NF of variables in F. If NF=0, the statement holds. Let the induction assumption holds for all formula with less than NF>0 variables, prove it for F. Consider a variable x of F and let Ca1∨xa,…,Cana∨xa are the clauses of [{xa}]F∖[{¯¯¯¯¯xa}]F for some na≥0. Define a Boolean formula G obtained from F by removing all clauses Cai∨xa and adding clauses C0i∨C1j for all i and j. Since F is reduced, n0+n1>0 and so G contains at least one clause.

Finally, if there is a true F-assignment T, then for all i, j either C0i or C1j contains a literal from T. So, T is a true G-assignment, which is impossible. Thus, F is not satisfiable. ∎

Now describe the following algorithm. Let T=∅. While F contains a redundant literal z, reduce F to ρz(F) and extend T by adding literals from SF(z). If F is reduced, answers yes together with T if F does not contain clauses and no otherwise.

Note that |ρz(F)|<|F| for all redundant literal z, every step can be performed in time bounded by O(|F|3), and the obtained set T is an F-assignment such that every removed clause of F contains a literal from T. Due to Lemmas 3.1 and 3.2, the algorithm stops in time bounded by O(|F|4) and answers yes together with a true F-assignment T if F is satisfiable and no otherwise. Theorem 2.1 is proved.