Complexity of Edge Monitoring on Some Graph Classes

In this paper, we study the complexity of the edge monitoring problem. A vertex v monitors an edge e if both extremities together with v form a triangle in the graph. Given a graph G=(V,E) and a weight function on edges c where c(e) is the number of monitors that needs the edge e, the problem is to seek a minimum subset of monitors S such that every edge e in the graph is monitored by at least c(e) vertices in S. In this paper, we study the edge monitoring problem on several graph classes such as complete graphs, block graphs, cographs, split graphs, interval graphs and planar graphs. We also generalize the problem by adding weights on vertices. 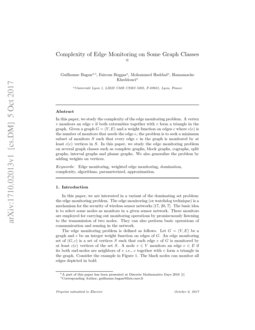 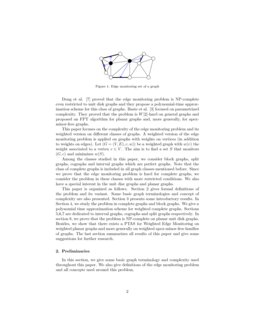 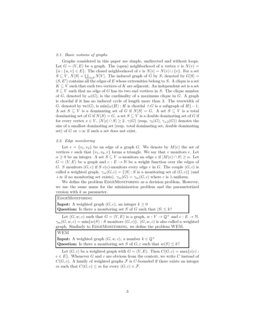 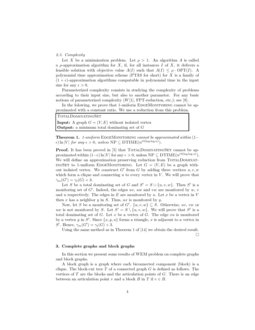 In this paper, we are interested in a variant of the dominating set problem: the edge monitoring problem. The edge moniroring (or watchdog technique) is a mechanism for the security of wireless sensor networks BMVH; GZYN; DXYCX. The basic idea is to select some nodes as monitors in a given sensor network. These monitors are employed for carrying out monitoring operations by promiscuously listening to the transmission of two nodes. They can also perform basic operations of communication and sensing in the network.

The edge monitoring problem is defined as follows. Let G=(V,E) be a graph and c be an integer weight function on edges of G. An edge monitoring set of (G,c) is a set of vertices S such that each edge e of G is monitored by at least c(e) vertices of the set S. A node v∈V monitors an edge e∈E if its both end-nodes are neighbors of v i.e., e together with v form a triangle in the graph. Consider the example in Figure 1. The black nodes can monitor all edges depicted in bold.

Dong et al. DXYCX proved that the edge monitoring problem is NP-complete even restricted to unit disk graphs and they propose a polynomial-time approximation scheme for this class of graphs. Baste et al. parametrizedplanar2016 focused on parametrized complexity. They proved that the problem is W[2]-hard on general graphs and proposed an FPT algorithm for planar graphs and, more generally, for apex-minor-free graphs.

This paper focuses on the complexity of the edge monitoring problem and its weighted version on different classes of graphs. A weighted version of the edge monitoring problem is applied on graphs with weights on vertices (in addition to weights on edges). Let (G=(V,E),c,w)) be a weighted graph with w(v) the weight associated to a vertex v∈V. The aim is to find a set S that monitors (G,c) and minimizes w(S).

Among the classes studied in this paper, we consider block graphs, split graphs, cographs and interval graphs which are perfect graphs. Note that the class of complete graphs is included in all graph classes mentioned before. Since we prove that the edge monitoring problem is hard for complete graphs, we consider the problem in these classes with more restricted conditions. We also have a special interest in the unit disc graphs and planar graphs.

This paper is organized as follows. Section 2 gives formal definitions of the problem and its variant. Some basic graph terminologies and concept of complexity are also presented. Section 3 presents some introductory results. In Section 4, we study the problem in complete graphs and block graphs. We give a polynomial time approximation scheme for weighted complete graphs. Sections 5,6,7 are dedicated to interval graphs, cographs and split graphs respectively. In section 8, we prove that the problem is NP-complete on planar unit disk graphs. Besides, we show that there exists a PTAS for Weighted Edge Monitoring on weighted planar graphs and more generally on weighted apex-minor-free families of graphs. The last section summarizes all results of this paper and give some suggestions for further research.

In this section, we give some basic graph terminology and complexity used throughout this paper. We also give definitions of the edge monitoring problem and all concepts used around this problem.

Graphs considered in this paper are simple, undirected and without loops. Let G=(V,E) be a graph. The (open) neighborhood of a vertex v is N(v)={u:{u,v}∈E}. The closed neighborhood of v is N[v]=N(v)∪{v}. For a set S⊆V, N[S]=⋃v∈SN[V]. The induced graph of G by S, denoted by G[S]=(S,E′) contains all the edges of E whose extremities belong to S. A clique is a set K⊆V such that each two vertices of K are adjacent. An independent set is a set S⊆V such that no edge of G has its two end vertices in S. The clique number of G, denoted by ω(G), is the cardinality of a maximum clique in G. A graph is chordal if it has no induced cycle of length more than 3. The treewidth of G, denoted by tw(G), is min{ω(H):H is chordal ∧G is a subgraph of H}−1. A set S⊆V is a dominating set of G if N[S]=G. A set S⊆V is a total dominating set of G if N(S)=G. a set S⊆V is a double dominating set of G if for every vertex x∈V, |N[x]∩S|≥2. γ(G) (resp. γt(G), γ×2(G)) denotes the size of a smallest dominating set (resp. total dominating set, double dominating set) of G or +∞ if such a set does not exist.

We define the problem EdgeMonitoring as a decision problem. However, we use the same name for the minimization problem and the parameterized version with k as parameter.

In the folowing, we prove that 1-uniform EdgeMonitoring cannot be approximated with a constant ratio. We use a reduction from this problem.

In this section we present some results of WEM problem on complete graphs and block graphs.

A block graph is a graph where each biconnected component (block) is a clique. The block-cut tree T of a connected graph G is defined as follows. The vertices of T are the blocks and the articulation points of G. There is an edge between an articulation point v and a block B in T if v∈B.

WEM can be solved in polynomial time on C-bounded weighted complete graphs.

WEM can be solved in quasi-linear time on uniform complete graphs.

The following lemma is useful to establish the connection between γm of a graph G and γm of its 2-connected components.

4 PTAS for the Wem problem in weighted complete graphs

In this section, we study the approximation complexity of the weighted monitoring set problem in vertex-weighted complete graphs.

There exists a PTAS for WEM on complete graphs.

In this section, we give a polynomial algorithm for computing WEM on weighted interval graphs. This algorithm uses dynamic programming. First, we introduce some definitions.

A graph G=(V,E) is an interval graph if there exists |V| intervals (Ii)i∈V=([ai,bi])i∈V of the real line such that {i,j}∈E if and only if Ii∩Ij≠∅ for every distinct vertices i,j∈V. We say that (Ii)i∈V is a realization of G. Without loss of generality, we can assume that there are no intervals Ii and Ij that have a common extremity.

nicepath-decomposition Let G=(V,E) be an interval graph and (Ii)i∈V be a realization of G. A nice path decomposition of G is a sequence of sets of vertices B0,…Bl such that

For the next lemmas, we consider an interval graph G=(V,E) and a nice path-decomposition B0,…,Bl of G. Moreover, we introduce the following notations. For i∈[0,l], Fi is the set of vertices appearing in some set Bj, j<i, but not in Bi. Vi=Fi∪Bi and Gi=G[Vi].

A set S⊆Vi is an i-partial solution if every edge e in Gi that has an extremity in Fi is c(e)-monitored by S. The i-representant W of S⊆Vi, denoted by repri(S), contains exactly the C+2 greatest vertices in S∩N[Bi] w.r.t. <R or is S∩N[Bi] if |S∩N[Bi]|<C+2. We say that S extends W if W is the i-representant of S.