Humans are able to think of complex tasks as combinations of simpler subtasks in order to learn the complex tasks more efficiently. For example, a backflip could be considered a combination of four subskills: jumping, tucking knees, rolling backwards, and thrusting arms downwards. Motivated by this line of reasoning, we propose a new algorithm that trains neural network policies on simple, easy-to-learn skills in order to cultivate latent spaces that accelerate adversarial imitation learning of complex, hard-to-learn skills. We evaluate our algorithm on a difficult task in a high-dimensional environment and see that it consistently outperforms a state-of-the-art baseline in training speed and overall task performance. 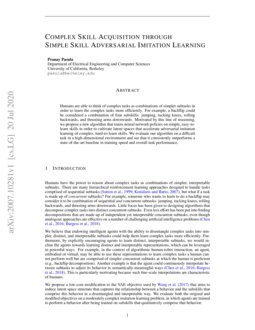 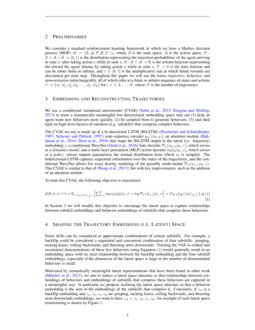 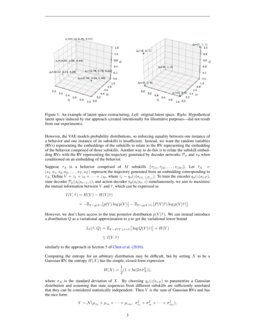 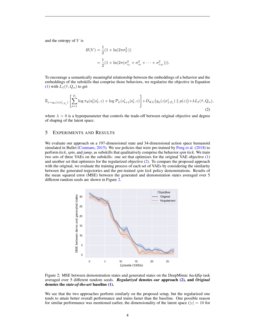 Humans have the power to reason about complex tasks as combinations of simpler, interpretable subtasks. There are many hierarchical reinforcement learning approaches designed to handle tasks comprised of sequential subtasks

[Sutton et al., 1999, Konidaris and Barto, 2007], but what if a task is made up of concurrent subtasks? For example, someone who wants to learn to do a backflip may consider it to be combination of sequential and

concurrent subtasks: jumping, tucking knees, rolling backwards, and thrusting arms downwards. Little focus has been given to designing algorithms that decompose complex tasks into distinct concurrent subtasks. Even less effort has been put into finding decompositions that are made up of independent yet interpretable concurrent subtasks, even though analogous approaches are effective on a number of challenging artificial intelligence problems

We believe that endowing intelligent agents with the ability to disentangle complex tasks into simpler, distinct, and interpretable subtasks could help them learn complex tasks more efficiently. Furthermore, by explicitly encouraging agents to learn distinct, interpretable subtasks, we would incline the agents towards learning distinct and interpretable representations, which can be leveraged in powerful ways. For example, in the context of algorithmic human-robot interaction, an agent, embodied or virtual, may be able to use these representations to learn complex tasks a human cannot perform well but are comprised of simpler concurrent subtasks at which the human is proficient (e.g., backflip decomposition). Another example is that the agent could continuously interpolate between subtasks to adjust its behavior in semantically-meaningful ways

[Chen et al., 2016, Burgess et al., 2018]. This is particularly motivating because such fine-scale interpolations are characteristic of humans.

We propose a low-cost modification to the VAE objective used by Wang et al. [2017] that aims to induce latent space structure that captures the relationship between a behavior and the subskills that comprise this behavior in a disentangled and interpretable way. We evaluate both the original and modified objectives on a moderately complex imitation learning problem, in which agents are trained to perform a behavior after being trained on subskills that qualitatively comprise that behavior.

s′ after taking action a while in state s, R:S×A→R is the reward function representing the reward the agent obtains by taking action a while in state s, T>0 is the time horizon and can be either finite or infinite, and γ∈[0,1] is the multiplicative rate at which future rewards are discounted per time step. Throughout this paper we will use the terms trajectory, behavior, and demonstration interchangeably, all of which refer to a finite or infinite sequence of states and actions τi={si1,ai1,si2,ai2,…,siT,aiT} for i=1,2,…,N, where N is the number of trajectories.

We use a conditional variational autoencoder (CVAE)

[Sohn et al., 2015, Kingma and Welling, 2013] to learn a semantically-meaningful low-dimensional embedding space that can (1) help an agent learn new behaviors more quickly, (2) be sampled from to generate behaviors, (3) and shed light on high-level factors of variation (e.g. subskills) that comprise complex behaviors.

The CVAE we use is made up of a bi-directional LSTM (BiLSTM) [Hochreiter and Schmidhuber, 1997, Schuster and Paliwal, 1997] state-sequence encoder qϕ(z|s1:T), an attention module [Bahdanau et al., 2014, Zhou et al., 2016] that maps the BiLSTM output to the latent (i.e. trajectory) embedding z, a conditional WaveNet [Oord et al., 2016] state decoder Pψ(st+1|st,z), which serves as a dynamics model

, whose outputs parametrize the normal distribution from which

at is sampled. The bidirectional-LSTM captures sequential information over the states of the trajectories, and the conditional WaveNet allows for exact density modeling of the possibly multi-modal Pψ(st+1|st,z). This CVAE is similar to that of [Wang et al., 2017], but with key improvements, such as the addition of an attention module.

To train this CVAE, the following objective is maximized

In Section 3 we will modify this objective to encourage the latent space to capture relationships between subskill embeddings and behavior embeddings of subskills that comprise these behaviors.

Some skills can be considered as approximate combinations of certain subskills. For example, a backflip could be considered a sequential and concurrent combination of four subskills: jumping, tucking knees, rolling backwards, and thrusting arms downwards. Training the VAE to embed and reconstruct demonstrations of these five behaviors using Equation (1) would generally result in an embedding space with no clear relationship between the backflip embedding and the four subskill embeddings, especially if the dimension of the latent space is large or the number of demonstrated behaviors is small.

Motivated by semantically meaningful latent representations that have been found in other work [Mikolov et al., 2013], we aim to induce a latent space structure so that relationships between embeddings of behaviors and embeddings of subskills that comprise these behaviors are captured in a meaningful way. In particular we propose inclining the latent space structure so that a behavior embedding is the sum of the embeddings of the subskills that comprise it. Concretely, if zA is a backflip embedding and za,zb,zc,zd are jumping, tucking knees, rolling backwards, and thrusting arms downwards embeddings, we want to have zA=za,zb,zc,zd. An example of such latent space restructuring is shown by Figure 1.

Pψ and πθ when conditioned on an embedding of the behavior.

similarly to the approach in Section 5 of Chen et al. [2016]. Computing the entropy for an arbitrary distribution may be difficult, but by setting X to be a Gaussian RV, the entropy H(X) has the simple, closed-form expression

is the standard deviation of

to parametrize a Gaussian distribution and assuming that state sequences from different subskills are sufficiently unrelated that they can be considered statistically independent. Then

and the entropy of V is

To encourage a semantically meaningful relationship between the embeddings of a behavior and the embeddings of the subskills that comprise those behaviors, we regularize the objective in Equation (1) with LI(~τ,Qα) to get

is a hyperparameter that controls the trade-off between original objective and degree of shaping of the latent space.

We evaluate our approach on a 197-dimensional state and 34-dimensional action space humanoid simulated in Bullet [Coumans, 2015]. We use policies that were pre-trained by Peng et al. [2018] to perform kick, spin, and jump, as subskills that qualitatively comprise the behavior spin kick. We train two sets of three VAEs on the subskills: one set that optimizes for the original VAE objective (1) and another set that optimizes for the regularized objective (2). To compare the proposed approach with the original, we evaluate the training process of each set of VAEs by considering the similarity between the generated trajectories and the pre-trained spin kick policy demonstrations. Results of the mean squared error (MSE) between the generated and demonstration states averaged over 5 different random seeds are shown in Figure 2.

We see that the two approaches perform similarly on the proposed setup, but the regularized one tends to attain better overall performance and trains faster than the baseline. One possible reason for similar performance was mentioned earlier, the dimensionality of the latent space (|z|=10 for results in Figure 2) may have been too large for the number of subskills and behaviors. As a result, the latent space may not have been forced to be constrained in some way that significantly affected performance. Regardless, we believe that the consistent performance gain from our regularized approach over the non-regularized baseline indicates that this line of research is worth looking into.

We explored the idea of inducing certain latent structure through the maximization of mutual information between generated behaviors and embeddings of the subskills that qualitatively comprise those behaviors, which, to the best of our knowledge, has not yet been investigated. Though our algorithm slightly outperformed the state-of-the-art baseline, there is much room for future work. The CVAE could be replaced with a β-CVAE [Higgins et al., 2017] to control disentanglement of z. The proposed approach could be evaluated on behaviors and subskills that more strictly adhere to concurrent relationship desired. A larger number of behaviors and subskills could be trained at once, both to constrain the latent space and to enrich the pool of subskills from which to train on and inspect the relationships between.

The author thanks John Chong for this and countless other opportunities.