This paper provides new stability results for Action-Dependent Heuristic Dynamic Programming (ADHDP), using a control algorithm that iteratively improves an internal model of the external world in the autonomous system based on its continuous interaction with the environment. We extend previous results by ADHDP control to the case of general multi-layer neural networks with deep learning across all layers. In particular, we show that the introduced control approach is uniformly ultimately bounded (UUB) under specific conditions on the learning rates, without explicit constraints on the temporal discount factor. We demonstrate the benefit of our results to the control of linear and nonlinear systems, including the cart-pole balancing problem. Our results show significantly improved learning and control performance as compared to the state-of-art. 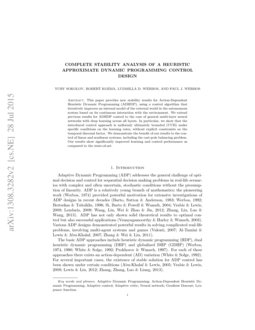 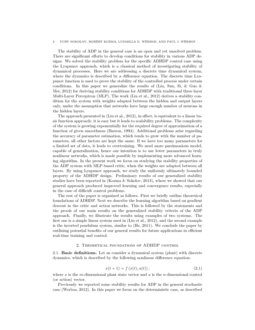 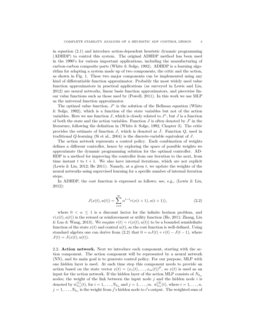 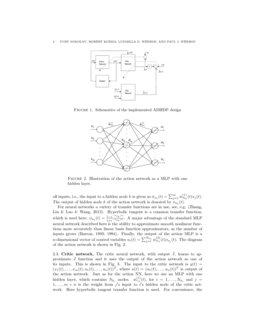 On the stability properties of Gated Recurrent Units neural networks

The goal of this paper is to provide sufficient conditions for guarantee...
Fabio Bonassi, et al. ∙

The stability of ADP in the general case is an open and yet unsolved problem. There are significant efforts to develop conditions for stability in various ADP designs. We solved the stability problem for the specific ADHDP control case using the Lyapunov approach, which is a classical method of investigating stability of dynamical processes. Here we are addressing a discrete time dynamical system, where the dynamics is described by a difference equation. The discrete time Lyapunov function is used to prove the stability of the controlled process under certain conditions. In this paper we generalize the results of (Liu, Sun, Si, & Guo &

Mei, 2012) for deriving stability conditions for ADHDP with traditional three layer Multi-Layer Perceptron (MLP). The work (Liu et al., 2012) derives a stability condition for the system with weights adapted between the hidden and output layers only, under the assumption that networks have large enough number of neurons in the hidden layers.

The approach presented in (Liu et al., 2012), in effect, is equivalent to a linear basis function approach: it is easy but it leads to scalability problems. The complexity of the system is growing exponentially for the required degree of approximation of a function of given smoothness (Barron, 1994). Additional problems arise regarding the accuracy of parameter estimation, which tends to grow with the number of parameters, all other factors are kept the same. If we have too many parameters for a limited set of data, it leads to overtraining. We need more parsimonious model, capable of generalization, hence our intention is to use fewer parameters in truly nonlinear networks, which is made possible by implementing more advanced learning algorithm. In the present work we focus on studying the stability properties of the ADP system with MLP-based critic, when the weights are adapted between all layers. By using Lyapunov approach, we study the uniformly ultimately bounded property of the ADHDP design. Preliminary results of our generalized stability studies have been reported in (Kozma

& Sokolov, 2013), where we showed that our general approach produced improved learning and convergence results, especially in the case of difficult control problems.

The rest of the paper is organized as follows. First we briefly outline theoretical foundations of ADHDP. Next we describe the learning algorithm based on gradient descent in the critic and action networks. This is followed by the statements and the proofs of our main results on the generalized stability criteria of the ADP approach. Finally, we illustrate the results using examples of two systems. The first one is a simple linear system used in (Liu et al., 2012), and the second example is the inverted pendulum system, similar to (He, 2011). We conclude the paper by outlining potential benefits of our general results for future applications in efficient real-time training and control.

Let us consider a dynamical system (plant) with discrete dynamics, which is described by the following nonlinear difference equation:

where x is the m

u is the n-dimensional control (or action) vector.

Previously we reported some stability results for ADP in the general stochastic case (Werbos, 2012). In this paper we focus on the deterministic case, as described in equation (2.1) and introduce action-dependent heuristic dynamic programming (ADHDP) to control this system. The original ADHDP method has been used in the 1990’s for various important applications, including the manufacturing of carbon-carbon composite parts (White & Sofge, 1992). ADHDP is a learning algorithm for adapting a system made up of two components, the critic and the action, as shown in Fig. 1

The optimal value function, J∗ is the solution of the Bellman equation (White & Sofge, 1992), which is a function of the state variables but not of the action variables. Here we use function J, which is closely related to J∗, but J is a function of both the state and the action variables. Function J is often denoted by J′ in the literature, following the definition in (White & Sofge, 1992, Chapter 3). The critic provides the estimate of function J, which is denoted as ^J. Function Q, used in traditional Q-learning (Si et al., 2004) is the discrete-variable equivalent of J.

The action network represents a control policy. Each combination of weights defines a different controller, hence by exploring the space of possible weights we approximate the dynamic programming solution for the optimal controller. ADHDP is a method for improving the controller from one iteration to the next, from time instant t to t+1. We also have internal iterations, which are not explicit (Lewis & Liu, 2012; He 2011). Namely, at a given t

, we update the weights of the neural networks using supervised learning for a specific number of internal iteration steps.

Next we introduce each component, starting with the action component. The action component will be represented by a neural network (NN), and its main goal is to generate control policy. For our purpose, MLP with one hidden layer is used. At each time step this component needs to provide an action based on the state vector x(t)=(x1(t),…,xm(t))T, so x(t) is used as an input for the action network. If the hidden layer of the action MLP consists of Nha nodes; the weight of the link between the input node j and the hidden node i is denoted by ^w(1)aij(t), for i=1,…,Nha and j=1,…,m. ^w(2)aij(t), where i=1,…,n, j=1,…,Nha is the weight from j′s hidden node to i′s output. The weighted sum of all inputs, i.e., the input to a hidden node k is given as σak(t)=∑mj=1^w(1)akj(t)xj(t). The output of hidden node k of the action network is denoted by ϕak(t).

For neural networks a variety of transfer functions are in use, see, e.g. (Zhang, Liu & Luo & Wang, 2013). Hyperbolic tangent is a common transfer function, which is used here: ϕak(t)=1−e−σak(t)1+e−σak(t). A major advantage of the standard MLP neural network described here is the ability to approximate smooth nonlinear functions more accurately than linear basis function approximators, as the number of inputs grows (Barron, 1993; 1994). Finally, the output of the action MLP is a n-dimensional vector of control variables ui(t)=∑Nhaj=1^w(2)aij(t)ϕaj(t). The diagram of the action network is shown in Fig. 2.

3.1. Adaptation of the critic network

By applying the chain rule, the adaptation of the critic network’s weights between input layer and hidden layer is given as follow

The last calculation is obtained with respect to the main HDP (and ADHDP) paradigm, which treats ^J(⋅) at different time steps as different functions; see e.g., (Lewis & Liu, 2012; Werbos, 2012). Application of the chain rule for the adaptation of the critic network’s weights between hidden layer and output layer yields Δ^w(2)ci(t)=lc[−∂Ec(t)∂^w(2)ci(t)], which leads to

3.2. Adaptation of the action network

& Sofge, 1992), which entails adapting the weights so as to minimize ^J(t). In this paper we used an importance-weighted training approach. We denote by Uc the desired ultimate objective function. Then the minimized error measure is given in the form Ea(t)=12e2a(t), where ea(t)=^J(t)−Uc is the prediction error of the action NN.

In the framework of the reinforcement learning paradigm, the success corresponds to an objective function, which is zero at each time step (Barto, Sutton

& Anderson, 1983). Based on this consideration and for the sake of simplicity of the further derivations, we assume Uc=0, that is, the objective function is zero at each time step, i.e. there is success.

Let us consider gradient descent algorithm as the weight update rule similarly as we did for the critic network above. That is, ^wa(t+1)=^wa(t)+Δ^wa(t), where Δ^wa(t)=la[−∂Ea(t)∂^wa(t)] and la>0 is the learning rate.

By applying the chain rule, the adaptation of the action network’s weights between input layer and hidden layer is given as Δ^w(1)aij(t)=la[−∂Ea(t)∂^w(1)aij(t)],

Using similar approach for the action network’s weights between hidden layer and output layer, finally we get the following Δ^w(2)aij(t)=la[−∂Ea(t)∂^w(2)aij(t)],

In this section we employ Lyapunov function approach to evaluate the stability of dynamical systems. The applied Lyapunov analysis allows to establish the UUB property without deriving the explicit solution of the state equations.

4.1. Basics of the Lyapunov approach

Let w∗c,w∗a denote the optimal weights, that is, the following holds: w∗c=argmin^wc∥∥α^J(t)+r(t)−^J(t−1)∥∥; we assume that the desired ultimate objective Uc=0 corresponds to success then w∗a=argmin^wa∥∥^J(t)∥∥.

A dynamical system is said to be uniformly ultimately bounded with ultimate bound b>0, if for any a>0 and t0>0, there exists a positive number N=N(a,b) independent of t0, such that ∥~w(t)∥≤b for all t≥N+t0 whenever ∥~w(t0)∥≤a.

In the present study, we make use of a theorem concerning the UUB property (Sarangapani, 2006). Detailed proof of this theorem appears in (Michel & Hou & Liu, 2008). We adapt the notation for our situation and address the special case of a discrete dynamical systems as given in (4.1).

(UUB property of a discrete dynamical system) If, for system (4.1), there exists a function L(~w(t),t) such that for all ~w(t0) in a compact set K, L(~w(t),t) is positive definite and the first difference, ΔL(~w(t),t)<0 for ∥~w(t0)∥>b, for some b>0, such that b-neighborhood of ~w(t) is contained in K, then the system is UUB and the norm of the state is bounded to within a neighborhood of b.

Based on this theorem, which gives a sufficient condition, we can determine the UUB property of the dynamical system selecting an appropriate function L. For this reason, we first consider all components of our function candidate separately and investigate their properties, and thereafter we study the behavior of L function to match the condition from Theorem 1.

In this subsection we introduce four lemmas which will be used in the proof of our main theorem.

Let w∗a and w∗c be the optimal weights for action and critic networks. Assume they are bounded, i.e., ∥w∗a∥≤wmaxa and ∥w∗c∥≤wmaxc.

where ζc(t)=~w(2)c(t)ϕc(t) is the approximation error of the output of the critic network.

, i.e., it is optimal for each time moment

t, we get the following

Based on the last expression, we can find the trace of multiplication of ~w(2)c(t+1) by itself in the following way:

Since ~w(2)c(t)ϕc(t) is a scalar, we can rewrite the middle term in the above formula as follows:

(Lemma 2). Let us consider the weights from the hidden layer to output layer of the action network which are updated according to (3.5)

Based on this expression, it is easy to see that

Here the last formula is based on the assumption that all vector multiplications are under trace function.

Now let us consider the first difference of function L2(t), that is, the following expression

After substituting the appropriate terms in the last formula, we get

After substituting this formula into ΔL2, we get

Finally we get the following bound for ΔL2(t), as required:

If we introduce the following normalization for the network’s weights ∥∥(^w(2)c(t))TC(t)∥∥2=1 and fix the weights of the input layer, then applying Lemmas 1 and 2, we can readily obtain the results given by (Liu et al., 2012).

(Lemma 3). Let us consider the weight update rule of the critic network between input layer and hidden layer in the form

Following the same approach as earlier, we can express ~w(1)c(t+1) by

For convenience, we introduce the following notation . Then the trace of multiplication can be written as