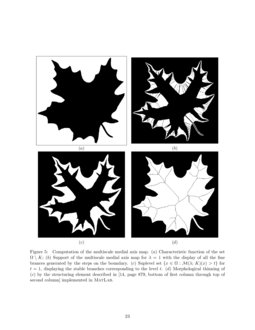 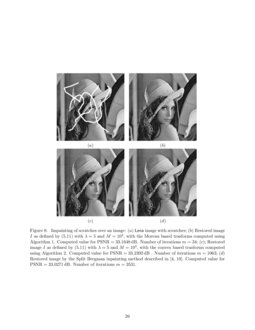 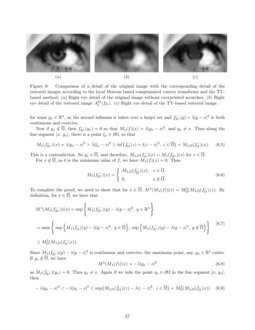 Compensated Convex Based Transforms for Image Processing and Shape Interrogation

This paper reviews some recent applications of the theory of the compens...
Antonio Orlando, et al. ∙

In this paper we study the covering numbers of the space of convex and u...
Adityanand Guntuboyina, et al. ∙

In this paper, we analyse the performance of the closed-loop Whiplash gr...
Subhransu S. Bhattacharjee, et al. ∙

We define and study a class of subshifts of finite type (SFTs) defined b...
Ville Salo, et al. ∙

In this paper we ‘localize’ the global notions of compensated convex transforms, first introduced in [28, 29], by defining such transforms over bounded convex closed domains in Rn so that their values in the domain agree with the globally defined transforms applied to some special extensions of the function to Rn. The motivation for such local definitions is mainly from applications to digital images and data arrays, where we have to consider functions defined on a rectangular box.

The theory of compensated convexity transforms has been applied to, for example, digital image processing and computational geometry. So far, applications of the theory include the design of multiscale, parametrized, geometric singularity extraction of ridges, valleys and edges from graphs of functions and from characteristic functions of closed sets in

, and for the interpolation and approximation of sampled functions

[33]. By ‘robustness’ here we mean the Hausdorff stability, that is, the error between the outputs obtained from two data samples is controlled by the Hausdorff distance between the two sampled input data sets.

In the applications mentioned above, the data domains are usually represented by boxes in Rn. The numerical schemes used in [30, 31, 32, 33, 34] for the evaluation of the compensated convex transforms relied on the availability of schemes for computing the convex envelope of a given function and on the implicit assumption that the transforms coincide with the function at the boundary of the data domain. Such schemes were used to demonstrate the numerical feasibility of the transforms rather than (i) designing efficient numerical schemes that compute them and/or (ii) analysing the effect of the boundary assumptions. In this paper we address the more practical question of accurately and effectively computing the compensated convex transforms for functions defined on a bounded convex domain without using numerical schemes that compute the convex envelope. In order to do so, we will explore the alternative definitions of the compensated convex transforms based on the Moreau envelopes. One of the advantages of this approach is that when it comes to the numerical implementation by the scheme we propose, we obtain an estimate of the number of iterations which provides the exact discrete Moreau envelope. This is different from the application of iterative schemes to compute the convex envelope which can be shown to converge but for which no convergence rate is known to be available [21].

where co[h] is the convex envelope of the function h:Rn→R∪{∞} bounded below. Given g:Rn→R∪{−∞} such that g(x)≤c0+c1|x|2, x∈Rn, the quadratic upper compensated convex transform (upper transform for short) of g of module λ>0 is defined for x∈Rn by

The lower and upper transform can be, in turn, characterized in terms of the critical mixed Monreau envelopes as follows [30, 31]

where, in our notation,

are the lower and upper Moreau envelope of g, respectively [19, 20, 15, 1, 5], defined as the inf- and sup-convolution of g with quadratic perturbations, respectively.

In mathematical morphology [24, 27, 25], the Moreau lower and upper envelopes can be viewed as ‘greyscale’ erosions and dilations by quadratic structuring elements [3, 13], respectively, thus it is possible to offer an alternative interpretation of the transforms (1.3) as ‘one-step’ morphological openings and closings [30].

Note that (1.1), (1.2) and their alternative representations (1.3) are given for extended real valued functions. They can thus be applied to functions g, defined in proper subsets Ω of Rn by defining an extension of g to be ∞ or −∞ in Rn∖Ω, as is common practice in convex analysis. However, such natural and direct definitions of local compensated convex transforms for functions defined in Ω using (1.3) depend on values of the Moreau envelope at points outside the domain Ω, while convex envelope based methods using (1.1) or (1.2) will rely on convex envelope based schemes which, as far as we know, are neither efficient nor accurate.

Let Ω be a non-empty bounded open convex subset of Rn. We consider bounded functions f:Ω⊂Rn↦R satisfying m≤f(x)≤M in Ω for some constants −∞<m≤M≤+∞. Without loss of generality, and if not otherwise specified, we set m=infΩf and M=supΩf and define the oscillation of f in Ω by

and the auxiliary functions f−Rn and f+Rn that extend f from Ω to the whole space Rn,

In practice, the extensions f−¯¯¯Ω, f+¯¯¯Ω of f to the boundary ∂Ω correspond to adding a frame of one pixel wide layer on the boundary of the data array and defining f at each point of the frame by the maximum value or the minimum value of the function.

For the function f−Rn and f+Rn we then consider the following transformations which are well defined for x∈Rn,

and their characterization (1.3) in terms of the critical mixed Moreau envelopes:

For a bounded function g:¯¯¯¯Ω→R defined in the closure of a convex bounded open set Ω, we also introduce for x∈¯¯¯¯Ω the notation Mλ,Ω(g)(x) and MλΩ(g)(x) to denote the following inf- and sup-convolutions of g with quadratic weights,

which coincide with the restriction to ¯¯¯¯Ω of Mλ(g∞) and Mλ(g−∞), respectively, where

and the local upper compensanted convex transform of f in ¯¯¯¯Ω, as

It is easy to see that equalities (1.13) do not hold, in general, if we consider f∞ and f∞Ω [respect. f−∞ and f−∞Ω]. While our extensions can make the local versions equals to the global ones, the infinity versions would not have this property.

After this brief introduction, in the next Section we present background results on convex analysis and the theory of compensated convex transforms. The main theoretical results are stated in Section 3. Here, we state that if Ω⊂Rn is a bounded convex open set and f:Ω→R a bounded function, then for any x∈¯¯¯¯Ω (see Theorem 3.1)

Furthermore, we also find that there exists a constant κ(λ,f) which depends on λ and f such that at the points x∈Ω with dist(x,∂Ω)>κ(λ,f), the values of Clλ,Ω(f−¯¯¯Ω)(x) and Cuλ,Ω(f+¯¯¯Ω)(x) depend only on the values of f on Ω. For the special case of the characteristic function χK of a compact set K⊂Ω, which represents ‘geometric shapes’ (binary data), we use the natural and simple extension χΩK defined in (3.9), which is the restriction of the characteristic function χK to ¯¯¯¯Ω, and χK itself, rather than the extensions defined in (1.5), (1.6), respectively. Under the condition that dist2(x,∂Ω)>1/λ, we establish Cuλ,Ω(χΩK)(x)=Cuλ(χK)(x) (see also the remarks about Theorem 3.7 below). We present in Section 4 an algorithm that allows the numerical realization of the Moreau envelope, whereas Section 5 contains numerical experiments which illustrate how to apply our theoretical findings to carry out, for instance, image processing and computational geometry tasks. As examples, we discuss the finding of ridges in the graph of a function, image inpainting, and intersections of curves in a plane. The paper concludes with Section 6 which contains the proofs of the main results.

This section presents a brief overview of some basic results in convex analysis and the theory of compensated convex transforms that will be used in the sequel for the proof of the main results; for a comprehensive account of convex analysis, refer to Refs. [11, 22], and to Refs. [28, 30] for an account of the theory of compensated convex transforms.

We will also introduce the following local version of convex envelope at a point.

We recall also the following ordering properties for compensated convex transforms which can be found in Ref. [28],

whereas for f≤g in Rn, we have that

(Translation invariance property) For any f:Rn↦(−∞,+∞] bounded below and for any affine function ℓ:Rn↦R, co[f+ℓ]=co[f]+ℓ. Consequently, both Cuλ(f) and Clλ(f) are translation invariant against the weight function, that is

for all x∈Rn and for every fixed x0. In particular, at x0, we have

For both theoretical and numerical developments, the following property on the locality of the compensated convex transforms for Lipschitz functions and bounded functions plays a fundamental role. The result for bounded functions is a slight modification of the locality property stated in Theorem 3.10, Ref. [30]. For a locally bounded function f:Rn↦R, we define the upper and the lower semi-continuous closure ¯¯¯f and f––[11, 22], respectively, by

We have the following result,

The values of Rf,λ given here have improved upon those obtained in Theorem 3.10, Ref. [30].

Next we state the locality properties for the Moreau envelopes.

Next we recall from [8] the definition of modulus of continuity of a function along with some of its properties.

Let f:Rn↦R be a bounded and uniformly continuous function in Rn. Then,

is called the modulus of continuity of f.

Let f:Rn↦R be a bounded and uniformly continuous function in Rn. Then the modulus of continuity ωf of f satisfies the following properties:

We conclude this Section by recalling the following definitions.

Let C be a subset of Rn. We define the distance of x∈Rn from C as

the diameter of the set C as

that is, dist2(⋅,C) is the inf-convolution of iC with ∥⋅∥2, and is proportional to the lower Moreau envelope of λiC with parameter λ.

Furthermore, we have the following locality results:

As an application of Theorem 3.1 we next consider the case where f is the squared Euclidean distance to a closed set. The following two results are useful, for instance, when we need to compute the multiscale medial axis map [32]. Let K be a nonempty closed set, the quadratic multiscale medial axis map of K with scale λ>0 is defined in [32, Definition 3.1] for x∈Rn by

Next we describe how M(λ;K)(x) can be expressed in terms of the local lower transform. The first result can be applied to find the multiscale medial axis map of the set Ω∖K, where Ω is an open subset of Rn and K⊂Ω a compact set.

The next result, on the other hand, applies when we need to define the multiscale medial axis map of an open set A⊂Ω.