Recent policy optimization approaches have achieved substantial empirical success by constructing surrogate optimization objectives. The Approximate Policy Iteration objective (Schulman et al., 2015a; Kakade and Langford, 2002) has become a standard optimization target for reinforcement learning problems. Using this objective in practice requires an estimator of the advantage function. Policy optimization methods such as those proposed in Schulman et al. (2015b) estimate the advantages using a parametric critic. In this work we establish conditions under which the parametric approximation of the critic does not introduce bias to the updates of surrogate objective. These results hold for a general class of parametric policies, including deep neural networks. We obtain a result analogous to the compatible features derived for the original Policy Gradient Theorem (Sutton et al., 1999). As a result, we also identify a previously unknown bias that current state-of-the-art policy optimization algorithms (Schulman et al., 2015a, 2017) have introduced by not employing these compatible features. 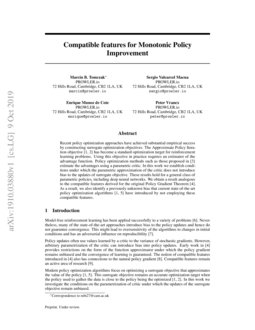 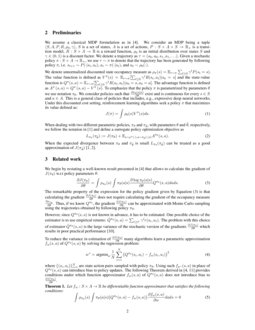 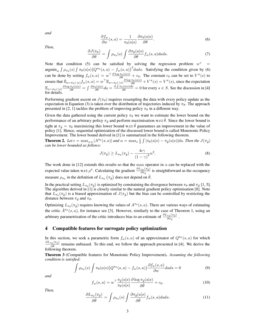 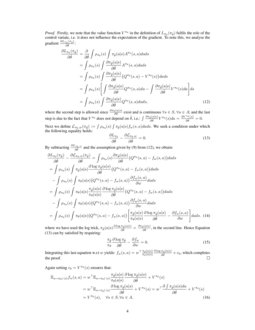 In this paper, we aim to prove the theorem that generalizes the Coagent ...
Modjtaba Shokrian Zini, et al. ∙

We present GradientDICE for estimating the density ratio between the sta...
Shangtong Zhang, et al. ∙

Number Theory meets Wireless Communications: an introduction for dummies like us

In this chapter we introduce the theory of Diophantine approximation via...
Victor Beresnevich, et al. ∙

Model-free reinforcement learning has been applied successfully to a variety of problems Duan et al. (2016). Nevertheless, many of the state-of-the-art approaches introduce bias to the policy updates and hence do not guarantee convergence. This might lead to oversensitivity of the algorithms to changes in initial conditions and has an adverserial influence on reproducibility Henderson et al. (2017).

Policy updates often use values learned by a critic to the variance of stochastic gradients. However, arbitrary parametrization of the critic can introduce bias into policy updates. Early work in

Sutton et al. (1999) provides restrictions on the form of the function approximator under which the policy gradient remains unbiased and the convergence of learning is guaranteed. The notion of compatible features introduced in Sutton et al. (1999) also has connections to the natural policy gradient Kakade (2001). Compatible features remain an active area of research Pajarinen et al. (2019).

We denote unnormalized discounted state occupancy measure as ρπ(s)=Eτ∼π∑t≥0γtP(st=s). The value function is defined as Vπ(s)=Eτ∼π[∑t≥0γtR(st,at)|s0=s] and the state-value function is Qπ(s,a)=Eτ∼π[∑t≥0γtR(st,at)|s0=s,a0=a]. The advantage function is defined as Aπ(s,a)=Qπ(s,a)−Vπ(s). To emphasize that the policy π is parametrized by parameters θ we use notation πθ. We consider policies such that ∂πθ(a|s)∂θ exist and is continuous for every s∈S and a∈A. This is a general class of policies that includes, e.g., expressive deep neural networks. Under this discounted cost setting, reinforcement learning algorithms seek a policy π that maximizes its value defined as:

When dealing with two different parametric policies, πθ and π~θ, with parameters θ and ~θ, respectively, we follow the notation in Schulman et al. (2015) and define a surrogate policy optimization objective as

We begin by restating a well-known result presented in Sutton et al. (1999) that allows to calculate the gradient of J(πθ) w.r.t policy parameters θ:

However, since Qπθ(s,a) is not known in advance, it has to be estimated. One possible choice of the estimator is to use empirical returns: ^Qπθ(s,a)=∑t≥t′γtr(st,at). The problem with this choice of estimator ^Qπθ(s,a) is the large variance of the stochastic version of the gradients ∂J(πθ)∂θ which results in poor practical performance Ciosek and Whiteson (2018).

To reduce the variance in estimation of ∂J(πθ)∂θ many algorithms learn a parametric approximation fw(s,a) of Qπθ(s,a) by solving the regression problem:

where {(si,ai)}Ni=1 are state action pairs sampled with policy πθ. Using such fw∗(s,a) in place of Qπθ(s,a) can introduce bias to policy updates. The following Theorem derived in Sutton et al. (1999); Konda and Tsitsiklis (2003) provides conditions under which function approximator fw(s,a) of Qπθ(s,a) does not introduce bias to ∂J(πθ)∂θ.

Performing gradient ascent on J(πθ) requires resampling the data with every policy update as the expectation in Equation (3) is taken over the distribution of trajectories induced by πθ. The approach presented in Kakade and Langford (2002); Schulman et al. (2015) tackles the problem of improving policy πθ in a different way.

The work done in Achiam et al. (2017) extends this results so that the max operator in α can be replaced with the expected value taken w.r.t ρπ. Calculating the gradient ∂Lπθ(π~θ)∂π~θ is straightforward as the occupancy measure ρπθ in the definition of Lπθ(π~θ) does not depend on ~θ.

In the practical setting Lπθ(π~θ) is optimized by constraining the divergence between πθ and π~θ Schulman et al. (2015, 2017). The algorithm derived in Schulman et al. (2015) is closely similar to the natural gradient policy optimisation Kakade (2001). Note that Lπθ(π~θ) is a biased approximation of J(π~θ) but the bias can be controlled by restricting the distance between π~θ and πθ.

Optimizing Lπθ(π~θ) requires knowing the values of Aπθ(s,a). There are various ways of estimating the critic ^Aπθ(s,a), for instance see Schulman et al. (2015). However, similarly to the case of Theorem 1, using an arbitrary parametrization of the critic introduces bias to an estimate of ∂Lπθ(π~θ)∂π~θ .

In this section, we seek a parametric form fw(s,a) of an approximator of Qπθ(s,a) for which ∂Lπθ(π~θ)∂~θ remains unbiased. To this end, we follow the approach presented in Sutton et al. (1999). We derive the following theorem.

Assuming the following condition is satisfied:

Firstly, we note that the value function Vπθ in the definition of Lπθ(π~θ) fulfils the role of the control variate, i.e. it does not influence the expectation of the gradient. To note this, we analyse the gradient ∂Lπθ(π~θ)∂~θ:

Next we define Lπθ,w(π~θ):=∫ρπθ(s)∫π~θ(a|s)fw(s,a)dads. We seek a condition under which the following equality holds:

By subtracting ∂Lπθ,w∂~θ and the assumption given by (9) from (4), we obtain:

In reference Sutton et al. (1999) the authors conjecture that the the compatible features ∂logπθ(a|s)∂θ might be the only choice of features that lead to an unbiased policy gradient ∂J(πθ)∂θ. In the case of Lπθ(π~θ) we can provide another choice of features leading to an unbiased gradient ∂Lπθ(π~θ)∂~θ. The features derived in Theorem 3 depend on importance sampling weights π~θ(a|s)π~θ(a|s). To remove importance sampling weights π~θ(a|s)π~θ(a|s) from derived compatible features we modify the condition in Equation (9) by replacing action sampling distribution πθ(⋅|s) with π~θ(⋅|s).

Assuming that the following condition is satisfied:

The integral in Equation (4) can be set to zero by setting fw to solve the differential equation: ∂logπ~θ∂~θ−∂fw∂w=0,, which results in desired compatible features fw(s,a)=w⊤∂logπ~θ(a|s)∂~θ+c0. ∎

Assumption (17) in Theorem 4 has a natural interpretation. Intuitively, the critic values fw(s,a)

should be more accurate for actions with high probability under policy

π~θ. More formally, the condition in (17) can be satisfied by finding a parameter w∗ that minimises the weighted quadratic error: w∗=argmin∫ρπθ(s)∫πθ(a|s)π~θ(a|s)π~θ(a|s)(Qπθ(s,a)−fw(s,a))2dads, where weights π~θ(a|s)π~θ(a|s) ensure improved accuracy for likely actions a given s under target policy π~θ(⋅|s). Similarly, when target policy π~θ(⋅|s) assigns low probability to an action a the error in the critic fw(s,a) estimation is not relevant as it will not influence the gradient ∂Lπθ(π~θ)∂~θ.

Given a sequence of state action pairs {(st,at)}Tt=1 gathered by following policy πθ, the integrals in condition (17) can be also approximated with samples, which leads to a weighted regression problem emerging from Theorem 4:

We compare the obtained gradients to ground truth calculated using the true state action value function Qπθ(s,a). In both cases, we provide an increasing number of rollouts from policy πθ to both approaches and analyse the errors in estimation. We report bias, variance and RMSE of estimated gradients in Figure 1.

As expected, the bias in the estimation of ∂Lπθ(π~θ)∂~θ introduced by the standard critic cannot be removed by increasing the number of provided trajectories, as it is caused by employing a noncompatible function approximator. The derived compatible features are unbiased by construction, hence provide substantially improved quality of estimation of ∂Lπθ(π~θ)∂~θ. Interestingly, using compatible features also provides slightly lower variance than using the standard critic.

We have analysed the use of parametric critics to estimate the policy optimization surrogate objective in a systematical way. As a consequence, we can provide conditions under which the approximation does not introduce bias to the policy updates. This result holds for a general class of policies, including policies parametrized by deep neural networks. We have shown that for the investigated surrogate objective there exists two different choices of compatible features. We empirically demonstrated that the compatible features allow to estimate the gradient of surrogate objective more accurately.