Comparing the Behaviour of Deterministic and Stochastic Model of SIS Epidemic

Studies about epidemic modelling have been conducted since before 19th century. Both deterministic and stochastiic model were used to capture the dynamic of infection in the population. The purpose of this project is to investigate the behaviour of the models when we set the basic reproduction number, R_0. This quantity is defined as the expected number of contacts made by a typical infective to susceptibles in the population. According to the epidemic threshold theory, when R_0 ≤ 1, minor epidemic occurs with probability one in both approaches, but when R_0 > 1, the deterministic and stochastic models have different interpretation. In the deterministic approach, major epidemic occurs with probability one when R_0 > 1 and predicts that the disease will settle down to an endemic equilibrium. Stochastic models, on the other hand, identify that the minor epidemic can possibly occur. If it does, then the epidemic will die out quickly. Moreover, if we let the population size be large and the major epidemic occurs, then it will take off and then reach the endemic level and move randomly around the deterministic's equilibrium. 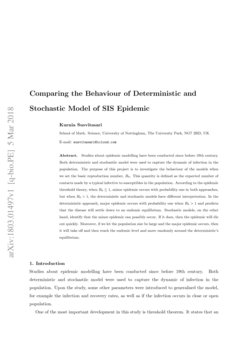 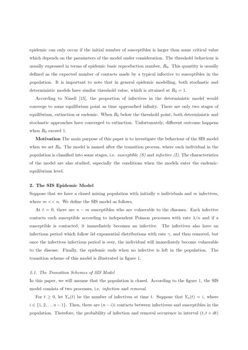 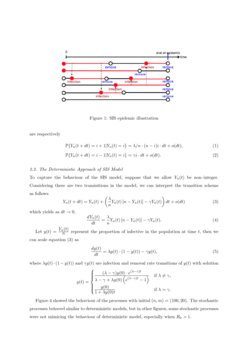 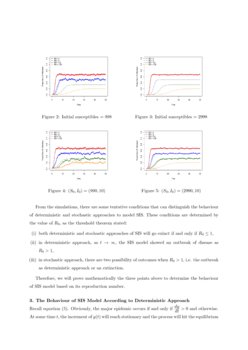 Studies about epidemic modelling have been conducted since before 19th century. Both deterministic and stochastiic model were used to capture the dynamic of infection in the population. Upon the study, some other parameters were introduced to generalised the model, for example the infection and recovery rates, as well as if the infection occurs in close or open population.

One of the most important development in this study is threshold theorem. It states that an epidemic can only occur if the initial number of susceptibles is larger than some critical value which depends on the parameters of the model under consideration. The threshold behaviour is usually expressed in terms of epidemic basic reproduction number, R0. This quantity is usually defined as the expected number of contacts made by a typical infective to susceptibles in the population. It is important to note that in general epidemic modelling, both stochastic and deterministic models have similar threshold value, which is attained at R0=1.

According to Nåsell [15], the proportion of infectives in the deterministic model would converge to some equilibrium point as time approached infinity. There are only two stages of equilibrium, extinction or endemic. When R0 below the threshold point, both deterministic and stochastic approaches have converged to extinction. Unfortunately, different outcome happens when R0 exceed 1.

. The model is named after the transition process, where each individual in the population is classified into some stages, i.e.

susceptible (S) and infective (I). The characteristics of the model are also studied, especially the conditions when the models enter the endemic- equilibrium level.

Suppose that we have a closed mixing population with initially n individuals and m infectives, where m<<n. We define the SIS model as follows.

At t=0, there are n−m susceptibles who are vulnerable to the diseases. Each infective contacts each susceptible according to independent Poisson processes with rate λ/n

and if a susceptible is contacted, it immediately becomes an infective. The infectives also have an infectious period which follow iid exponential distributions with rate

γ, and then removed, but once the infective’s infectious period is over, the individual will immediately become vulnerable to the disease. Finally, the epidemic ends when no infective is left in the population. The transition scheme of this model is illustrated in figure 1.

2.1 The Transition Schemes of SIS Model

In this paper, we will assume that the population is closed. According to the figure 1, the SIS model consists of two processes, i.e. infection and removal.

For t≥0, let Yn(t) be the number of infectives at time t. Suppose that Yn(t)=i, where i∈{1,2,…n−1}. Then, there are (n−i)i contacts between infectivees and susceptibles in the population. Therefore, the probability of infection and removal occurence in interval (t,t+dt) are respectively

2.2 The Deterministic Approach of SIS Model

To capture the behaviour of the SIS model, suppose that we allow Yn(t) be non–integer. Considering there are two transisitions in the model, we can interpret the transition scheme as follows

which yields as dt→0,

Let y(t)=Yn(t)n represent the proportion of infective in the population at time t, then we can scale equation (3) as

From the simulations, there are some tentative conditions that can distinguish the behaviour of deterministic and stochastic approaches to model SIS. These conditions are determined by the value of R0, as the threshold theorem stated:

Therefore, we will prove mathematically the three points above to determine the behaviour of SIS model based on its reproduction number.

3 The Behaviour of SIS Model According to Deterministic Approach

Recall equation (5). Obviously, the major epidemic occurs if and only if dydt>0 and otherwise. At some time t, the increment of y(t) will reach stationary and the process will hit the equilibrium point as shown in Figure 5 to 5. The roots of dydt=0, are y(t)=0 when R0=λ/γ≤1 and y(t)=1−R−10 when R0 exceeds 1. Therefore, according to the deterministic approach, the outbreak of epidemic happens when R0 exceeds 1 with probability one, and otherwise.

4 The Behaviour of SIS Model According to Stochastic Approach

It is easier to study stochastic model of SIS using simulation. In deterministic approach, minor epidemic occurs if and only if R0≤1, whilst major epidemic occurs otherwise. This is because when we let dydt≤0(or dydt>0), the proportion of infection in (5) decreases (increases) in population upon time t and then, the process will reach equilibrium.

Suppose that {Xn(t):t≥0} is the CTMC process defined on d-dimensional integer lattice Zd with finite number of possible transitions, given by qi,i+l=nβl(kn) where we define

According to Ethier and Kurtz [10], if the the size of a certain population was k, then the density of that population was kn with intensities approximated proportionally to its size. For example, suppose that there are i-susceptibles and j-infectious individuals. The infectious and removal rates are given in eq. (1) and (2), which are density–dependent functions.

Suppose that Yl is a independent standard Poisson process, where each of possible transition l∈Δ. By letting Xn(0) be non-random,

Now let ~Yl(u)=Yl(u)−u be a centered Poisson process at its expectation and ¯Xn(t)=Xn(t)n. Following equation (6) and letting F(x)=∑l∈Δlβl(x),

We will show that the stochastic process in equation (7) can be approximated by non-random quantity when we let the population size become sufficiently large. But before that, consider following theorem.

Now we will prove that eq. (7) can be approximated by non–random quantity as n→∞ by proofing theorem below.

Now consider the second term of the right hand side of equation (9).

Theorem 4.2 suggests that as n→∞, the process {¯Xn(t),t≥0} will resemble the deterministic version x(t). If {Yn(t),t≥0} represents the number of infectees at time t in SIS epidemic, then as n sufficiently large and t→∞, the process will settle down and randomly move around its mean, in this case are the equilibrium points of deterministic model.

According to Theorem 4.2, all stochastic processes of SIS should be mimicing the deterministic model. Obviously if R0≤1, both stochastic and deterministic models go to extinction. Unfortunately, when R0 exceeds 1, there are some cases when stochastic model extincts. These are illustrated in Figure 5 and 5. In stochastic processes, this anomaly is not surpraising at all since given a small number of infectees in an early epidemic, there is non–zero chance that the individual will recover before it makes contact to any susceptibles. The best analogy to illustrate this scenario is by branching process theorem.

Suppose that in a closed population, just by the end of its lifetime, each individual has independently produced j≥0 offsprings with probability Pj. Let Xn denote the size of n-th generation, then the process {Xn:n=0,1,2,⋯}

is a Markov chain having non-negative integer state space, where state

0 is a recurrent state and others are transient. Since any finite transient state will be visited finitely often, this leads to the conclusion that if Pj>0, then the population will either die out or take off.

Let μ be the mean number of offspring from a single individual, then

Suppose that π0=limn→∞P(Xn=0|X0=1) denotes the probability that the population dies out. Note that if μ<1, then P(Xn≥1)→0 almost surely as n→∞. This concept is very useful in epidemic modelling because when the expected number of infection is less than 1, then the epidemic will obviously die out. But, if μ>1, by conditioning on the X1, π0=∑∞j=0P(population dies out|X1=j)Pj.

Note that given X1=j, the population will eventually die out if and only if each of the j families started by the members of the first generation die out. This statement is supported by the fact that the probability of extinction occuring in the early stage is non-zero. Moreover, the probability that the members of a typical family to die out is π0. Thus, assuming that each individual acts independently, P(population dies out|X1=j)=πj0.

Now suppose that Ti is infection period of i-th typical infective, which is assumed to follow independent exponential distributions with intensity γ and let R be the total number of contacts made by a typical infective in the epidemic model. Then,

Once again, the above result explains threshold behaviour of the process. All figures confirm the interpretation of threshold behaviour of the SIS deterministic model, that if R0>1, major epidemic will occur despite of its initial values and population size. But in the stochastic model (which are displayed in jagged plots), some plots do not mimic the deterministic paths. Another simulation is provided in Table 1, where we compare the probability of the epidemics to die out approximated by brancing process and empirical.

We have successfully showed that both deterministic and stochastic models performed similar results when R0≤1. That is, the disease-free stage in the epidemic. But when R0>1, the deterministic and stochastic approaches had different interpretations. In the deterministic models, both the SIS and SIR models showed an outbreak of the disease and after some time t, the disease persisted and reached endemic-equilibrium stage. The stochastic models, on the other hands, had different interpretations. If we let the population size be sufficiently large, the epidemic might die out or survive. There were essentially two stages to this model. First, the infection might die out in the first cycle. If it did, then it would happen very quickly, just like the branching process theory described. Second, if it survived the first cycle, the outbreak was likely to occur, but after some time t, it would reach equilibrium just like the deterministic version. In fact, the stochastic models would mimic the deterministic’s paths and be scattered randomly around their equilibrium point.