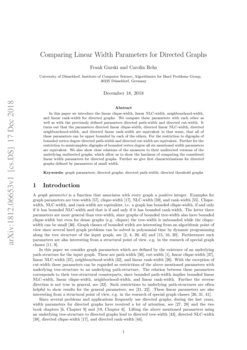 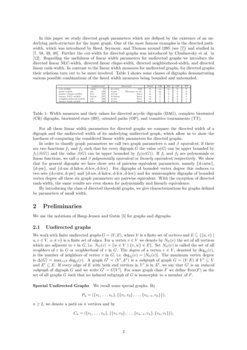 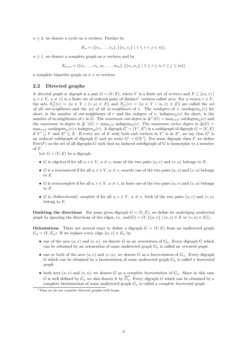 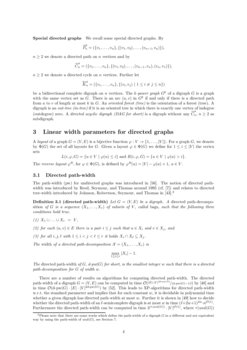 In this paper we consider the directed path-width and directed tree-widt...
Frank Gurski, et al. ∙

An intersection digraph is a digraph where every vertex v is represented...
Lars Jaffke, et al. ∙

On objects dual to tree-cut decompositions

An acyclic r-coloring of a directed graph G=(V,E) is a partition of the ...
Frank Gurski, et al. ∙

A graph parameter is a function that associates with every graph a positive integer. Examples for graph parameters are tree-width [57], clique-width [17], NLC-width [59], and rank-width [55]. Clique-width, NLC-width, and rank-width are equivalent, i.e. a graph has bounded clique-width, if and only if it has bounded NLC-width and that is if and only if it has bounded rank-width. The latter three parameters are more general than tree-width, since graphs of bounded tree-width also have bounded clique-width but even for dense graphs (e.g. cliques) the tree-width is unbounded while the clique-width can be small [36]. Graph classes of bounded width are interesting from an algorithmic point of view since several hard graph problems can be solved in polynomial time by dynamic programming along the tree structure of the input graph, see [2, 4, 39, 45] and [15, 16, 20]. Furthermore such parameters are also interesting from a structural point of view, e.g. in the research of special graph classes [11, 9].

In this paper we consider graph parameters which are defined by the existence of an underlying path-structure for the input graph. These are path-width [56], cut-width [1], linear clique-width [37], linear NLC-width [37], neighbourhood-width [32], and linear rank-width [26]. With the exception of cut-width these parameters can be regarded as restrictions of the above mentioned parameters with underlying tree-structure to an underlying path-structure. The relation between these parameters corresponds to their tree-structural counterparts, since bounded path-width implies bounded linear NLC-width, linear clique-width, neighborhood-width, and linear rank-width. Further the reverse direction is not true in general, see [32]. Such restrictions to underlying path-structures are often helpful to show results for the general parameters, see [21, 22]. These linear parameters are also interesting from a structural point of view, e.g. in the research of special graph classes [26, 31, 41].

α and β equivalent, if there are two functions f1 and f2 such that for every digraph G the value α(G) can be upper bounded by f1(β(G)) and the value β(G) can be upper bounded by f2(α(G)). If f1 and f2 are polynomials or linear functions, we call α and β polynomially equivalent or linearly equivalent, respectively. We show that for general digraphs we have three sets of pairwise equivalent parameters, namely {d-cutw}, {d-pw}, and {d-nw,d-lnlcw,d-lcw,d-lrw}. For digraphs of bounded vertex degree this reduces to two sets {d-cutw,d-pw} and {d-nw,d-lnlcw,d-lcw,d-lrw} and for semicomplete digraphs of bounded vertex degree all these six graph parameters are pairwise equivalent. With the exception of directed rank-width, the same results are even shown for polynomially and linearly equivalence.

By introducing the class of directed threshold graphs, we give characterizations for graphs defined by parameters of small width.

We use the notations of Bang-Jensen and Gutin [5] for graphs and digraphs.

We work with finite undirected graphs G=(V,E), where V is a finite set of vertices and E⊆{{u,v}∣u,v∈V, u≠v} is a finite set of edges. For a vertex v∈V we denote by NG(v) the set of all vertices which are adjacent to v in G, i.e. NG(v)={w∈V | {v,w}∈E}. Set NG(v) is called the set of all neighbors of v in G or neighborhood of v in G. The degree of a vertex v∈V, denoted by degG(v), is the number of neighbors of vertex v in G, i.e. degG(v)=|NG(v)|. The maximum vertex degree is Δ(G)=maxv∈VdegG(v). A graph G′=(V′,E′) is a subgraph of graph G=(V,E) if V′⊆V and E′⊆E. If every edge of E with both end vertices in V′ is in E′, we say that G′ is an induced subgraph of digraph G and we write G′=G[V′]. For some graph class F we define Free(F) as the set of all graphs G such that no induced subgraph of G is isomorphic to a member of F.

We recall some special graphs. By

n≥2, we denote a path on n vertices and by

n≥3, we denote a cycle on n vertices. Further by

n≥1, we denote a complete graph on n vertices and by

A directed graph or digraph is a pair G=(V,E), where V is a finite set of vertices and E⊆{(u,v)∣u,v∈V, u≠v}

is a finite set of ordered pairs of distinct

111Thus we do not consider directed graphs with loops. vertices called arcs. For a vertex v∈V, the sets N+G(v)={u∈V | (v,u)∈E} and N−G(v)={u∈V | (u,v)∈E} are called the set of all out-neighbours and the set of all in-neighbours of v. The outdegree of v, outdegreeG(v) for short, is the number of out-neighbours of v and the indegree of v, indegreeG(v) for short, is the number of in-neighbours of v in G. The maximum out-degree is Δ+(G)=maxv∈VoutdegreeG(v) and the maximum in-degree is Δ−(G)=maxv∈VindegreeG(v). The maximum vertex degree is Δ(G)=maxv∈VoutdegreeG(v)+indegreeG(v). A digraph G′=(V′,E′) is a subdigraph of digraph G=(V,E) if V′⊆V and E′⊆E. If every arc of E with both end vertices in V′ is in E′, we say that G′ is an induced subdigraph of digraph G and we write G′=G[V′]. For some digraph class F we define Free(F) as the set of all digraphs G such that no induced subdigraph of G is isomorphic to a member of F.

There are several ways to define a digraph G=(V,E) from an undirected graph Gu=(V,Eu). If we replace every edge {u,v}∈Eu by

We recall some special directed graphs. By

be a bidirectional complete digraph on n vertices. The k-power graph Gk of a digraph G is a graph with the same vertex set as G. There is an arc (u,v) in Gk if and only if there is a directed path from u to v of length at most k in G. An oriented forest (tree) is the orientation of a forest (tree). A digraph is an out-tree (in-tree) if it is an oriented tree in which there is exactly one vertex of indegree (outdegree) zero. A directed acyclic digraph (DAG for short) is a digraph without any −→Cn, n≥2 as subdigraph.

Let G=(V,E) be a digraph. A directed path-decomposition of G is a sequence (X1,…,Xr) of subsets of V, called bags, such that the following three conditions hold true.

The directed path-width of G, d-pw(G) for short, is the smallest integer w such that there is a directed path-decomposition for G of width w.

Example for digraphs of small directed path-width are given in Example 3.3, when considering the equivalent (cf. Lemma 5.9) notation of directed vertex separation number.

The directed vertex separation number of a digraph G=(V,E) is defined as follows.

Since the converse digraph has the same path-width as its original graph, we obtain an equivalent definition, which will be useful later on.

For every optimal layout φ we obtain the same value when we consider the arcs backwards in the reverse ordering φR. Thus we obtain an equivalent definition, which will be useful later on.

Subexponential parameterized algorithms for computing the directed cut-width of semicomplete digraphs are given in [25].

The linear NLC-width (lnlcw) for undirected graphs was introduced in [37] as a parameter by restricting the NLC-width444The abbreviation NLC results from the node label controlled embedding mechanism originally defined for graph grammars., defined in [59], to an underlying path-structure. Next we introduce the corresponding parameter for directed graphs by a modification of the edge inserting operation ×S of the linear NLC-width, which also leads to a restriction of directed NLC-width [38]. Let [k]={1,…,k} be the set of all integers between 1 and k.

The directed linear NLC-width of a digraph G, d-lnlcw(G) for short, is the minimum number of labels needed to define G using the following four operations:

The directed linear clique-width of a digraph G, d-lcw(G) for short, is the minimum number of labels needed to define G using the following four operations:

The neighborhood-width (nw) for undirected graphs was introduced in [32]. It differs from linear NLC-width and linear clique-width at most by one but it is independent of vertex labels.

The directed neighbourhood-width of a digraph G is

Let G=(V,E) a digraph and V1,V2⊂V be a disjoint partition of the vertex set of G. Further let MV2V1=(mij) be the adjacent matrix defined over the four-element field GF(4) for partition V1∪V2, i.e.

A directed linear rank decomposition of digraph G=(V,E) is a pair (T,f), where T is a caterpillar (i.e. a path with pendant vertices) and f is a bijection between V and the leaves of T. Each edge e of T divides the vertex set of G by f into two disjoint sets Ae,Be. For an edge e in T we define the width of e as rg(4)(MBeAe), i.e. the matrix rank555We denote by rg(4)(M) the rank of some matrix over {0,1,a,a2}, i.e. the number of independent lines or rows of M. A set of rows R

Let G be a directed graph.

The relations shown in Theorem 4.1 allow to imply the following values for the directed linear clique-width and directed neighbourhood-width of a k-power graph of a path.

For each width measure β∈{pw,cutw,nw,lnlcw,lcw,lrw} and every undirected graph G it holds β(G)=d-β(↔G).