It has by now become a standard approach to use the theory of sparse (or toric) elimination, based on the Newton polytope of a polynomial, in order to reveal and exploit the structure of algebraic systems. This talk surveys compact formulae, including older and recent results, in sparse elimination. We start with root bounds and juxtapose two recent formulae: a generating function of the m-Bézout bound and a closed-form expression for the mixed volume by means of a matrix permanent. For the sparse resultant, a bevy of results have established determinantal or rational formulae for a large class of systems, starting with Macaulay. The discriminant is closely related to the resultant but admits no compact formula except for very simple cases. We offer a new determinantal formula for the discriminant of a sparse multilinear system arising in computing Nash equilibria. We introduce an alternative notion of compact formula, namely the Newton polytope of the unknown polynomial. It is possible to compute it efficiently for sparse resultants, discriminants, as well as the implicit equation of a parameterized variety. This leads us to consider implicit matrix representations of geometric objects. 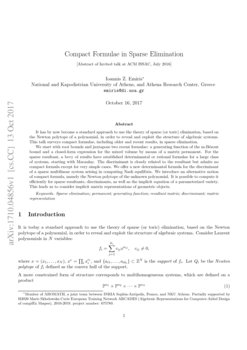 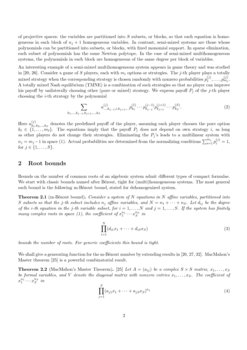 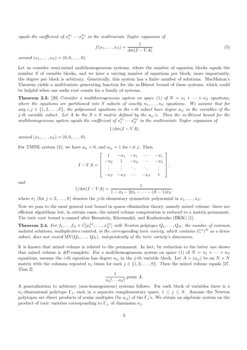 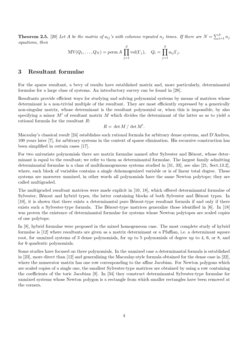 We present a compact formula for the derivative of a 3-D rotation matrix...
Guillermo Gallego, et al. ∙

The Key Equation for One-Point Codes

In this chapter we will give an insight into modern sparse elimination m...
Matthias Bollhöfer, et al. ∙

It is today a standard approach to use the theory of sparse (or toric) elimination, based on the Newton polytope of a polynomial, in order to reveal and exploit the structure of algebraic systems. Consider Laurent polynomials in N variables:

where x=(x1,…,xN), xe=∏ixeii, and {ai1,…,aiki}⊂ZN is the support of fi. Let Qi be the Newton polytope of fi defined as the convex hull of the support.

A more constrained form of structure corresponds to multihomogeneous systems, which are defined on a product

p(j)1,…,p(j)mj. A totally mixed Nash equilibrium (TMNE) is a combination of such strategies so that no player can improve his payoff by unilaterally choosing other (pure or mixed) strategy. We express payoff Pj of the j-th player choosing the i-th strategy by the polynomial

Here a(j)k1,k2,…,kS denotes the predefined payoff of the player, assuming each player chooses the pure option kℓ∈{1,…,mℓ}. The equations imply that the payoff Pj does not depend on own strategy i, as long as other players do not change their strategies. Eliminating the Pj’s leads to a multilinear system with nj=mj−1 in space (1). Actual probabilities are determined from the normalizing conditions ∑mji=1p(j)i=1, for j∈{1,…,S}.

Bounds on the number of common roots of an algebraic system admit different types of compact formulae. We start with classic bounds named after Bézout, tight for (multi)homogeneous systems. The most general such bound is the following m-Bézout bound, stated for dehomogenized system.

Consider a system of N equations in N affine variables, partitioned into S subsets so that the j-th subset includes nj affine variables, and N=n1+⋯+nS. Let dij be the degree of the i-th equation in the j-th variable subset, for i=1,…,N and j=1,…,S. If the system has finitely many complex roots in space (1), the coefficient of xn11⋯xnSS in

bounds the number of roots. For generic coefficients this bound is tight.

We shall give a generating function for the m-Bézout number by extending results in [26, 27, 32]. MacMahon’s Master theorem [25] is a powerful combinatorial result.

[25] Let A=(aij) be a complex S×S matrix, x1,…,xS be formal variables, and V denote the diagonal matrix with nonzero entries x1,…,xS. The coefficient of xn11⋯xnSS in

Let us consider semi-mixed multihomogeneous systems, where the number of equation blocks equals the number S of variable blocks, and we have a varying number of equations per block; more importantly, the degree per block is arbitrary. Generically, this system has a finite number of solutions. MacMahon’s Theorem yields a multivariate generating function for the m-Bézout bound of these systems, which could be helpful when one seeks root counts for a family of systems.

[20] Consider a multihomogeneous system on space (1) of N=n1+⋯+nS equations, where the equations are partitioned into S subsets of exactly n1,…,nS equations. We assume that for any i,j∈{1,2,…,S}, the polynomial equations in the i-th subset have degree aij in the variables of the j-th variable subset. Let A be the S×S matrix defined by the aij’s. Then the m-Bézout bound for the multihomogeneous system equals the coefficient of xn11⋯xnSS in the multivariate Taylor expansion of

Now we pass to the most general root bound in sparse elimination theory, namely mixed volume: there are efficient algorithms but, in certain cases, the mixed volume computation is reduced to a matrix permanent. The toric root bound is named after Bernstein, Khovanskii, and Kushnirenko (BKK) [1]:

For f1,…fN∈C[x±11,…,x±1N] with Newton polytopes Q1,…,QN, the number of common isolated solutions, multiplicities counted, in the corresponding toric variety, which contains (C∗)N as a dense subset, does not exceed \it\em MV(Q1,…, QN), independently of the toric variety’s dimension.

It is known that mixed volume is related to the permanent. In fact, by reduction to the latter one shows that mixed volume is #P-complete. For a multihomogeneous system on space (1) of N=n1+⋯+nS equations, assume the i-th equation has degree aij in the j-th variable block. Let A=(aij) be an N×N matrix with the columns repeated nj times for each j∈{1,2,…,S}. Then the mixed volume equals [27, Thm 2]

A generalization to arbitrary (non-homogeneous) systems follows. For each block of variables there is a nj-dimensional polytope Γj, each in a separate complementary space, 1≤j≤S. Assume the Newton polytopes are direct products of scalar multiples (by aij) of the Γj’s. We obtain an algebraic system on the product of toric varieties corresponding to Γj, of dimension nj.

[20] Let A be the matrix of aij’s with columns repeated nj times. If there are N=∑Sj=1nj equations, then

For the sparse resultant, a bevy of results have established matrix and, more particularly, determinantal formulae for a large class of systems. An introductory survey can be found in [28].

Macaulay’s classical result [24] establishes such rational formula for arbitrary dense systems, and D’Andrea, 100 years later [7], for arbitrary systems in the context of sparse elimination. His recursive construction has been simplified in certain cases [17].

For two univariate polynomials there are matrix formulae named after Sylvester and Bézout, whose determinant is equal to the resultant; we refer to them as determinantal formulae. The largest family admitting determinantal formulae is a class of multihomogeneous systems studied in [31, 33], see also [21, Sect.13.2], where, each block of variables contains a single dehomogenized variable or is of linear total degree. These systems are moreover unmixed, in other words all polynomials have the same Newton polytope; they are called multigraded.

The multigraded resultant matrices were made explicit in [10, 18], which offered determinantal formulae of Sylvester, Bézout and hybrid types, the latter containing blocks of both Sylvester and Bézout types. In [10], it is shown that there exists a determinantal pure Bézout-type resultant formula if and only if there exists such a Sylvester-type formula. The Bézout-type matrices generalize those identified in [6]. In [18] was proven the existence of determinantal formulae for systems whose Newton polytopes are scaled copies of one polytope.

In [8], hybrid formulae were proposed in the mixed homogeneous case. The most complete study of hybrid formulae is [12] where resultants are given as a matrix determinant or a Pfaffian, i.e. a determinant square root, for unmixed systems of 3 dense polynomials, for up to 5 polynomials of degree up to 4, 6, or 8, and for 6 quadratic polynomials.

Some studies have focused on three polynomials. In the unmixed case a determinantal formula is established in [23], more direct than [12] and generalizing the Macaulay-style formula obtained for the dense case in [22], where the numerator matrix has one row corresponding to the affine Jacobian. For Newton polygons which are scaled copies of a single one, the smallest Sylvester-type matrices are obtained by using a row containing the coefficients of the toric Jacobian [9]. In [34] they construct determinantal Sylvester-type formulae for unmixed systems whose Newton polygon is a rectangle from which smaller rectangles have been removed at the corners.

Discriminants are crucial in studying well-constrained algebraic systems, the system’s zero set, its singularities, and other properties of the system. The discriminant is closely related to the resultant but admits no compact formula except for very simple cases. Below we offer a new determinantal formula for a specific system. Recent work has shed light on the degree of mixed discriminants [5, 11] as a function of the Newton polytopes of the corresponding polynomials. An important open question is to obtain an explicit formula for multilinear systems [30].

In the context of sparse elimination the discriminant is defined for a set of polynomials Fi with fixed supports Ai, hence it is denoted ΔA1,…,An(F1,…,Fn) or Δ(F1,…,Fn).

The mixed discriminant Δ(F1,…,Fn) of n polynomials in n variables with fixed supports A1,…,An in Zn is the irreducible polynomial (with integer coprime coefficients, defined up to sign) in the coefficients of the Fi which vanishes whenever the system F1=⋯=Fn=0 has a multiple root (i.e., a root which is not simple) with nonzero coordinates, provided his discriminantal variety is a hypersurface; otherwise, the mixed discriminant is equal to the constant 1.

Clearly, the zero locus of the mixed discriminant is the variety of ill-posed systems, i.e., systems with at least one multiple root.

We focus on systems over P1×P1×P1 where each equation is missing one variable, motivated by the study of TMNE in games of 3 players with 2 pure strategies each, see polynomials (2). The bilinear system is as follows:

The following theorem gives a 6×6 determinantal expression for the discriminant. The formula is of Sylvester-type because the matrix entries are either zero or equal to a polynomial coefficient.

We argue that in sparse elimination it makes sense to consider an alternative notion of compact formula, namely the Newton polytope of the unknown polynomial. It typically allows computation of the polynomial by interpolation of the coefficients. It is possible to compute it efficiently for sparse resultants

[13], discriminants, as well as the implicit equation of a parameterized variety.

This section focuses on the latter case. Given (a superset of) the Newton polytope of the implicit equation, one constructs an interpolation matrix, which allows for various geometric operations to be efficiently computed on this matrix without need of developing the monomial representation of the implicit equation. The representation by interpolation matrices has been developed for parametric plane curves, surfaces, and hypersurfaces in the context of sparse elimination [15, 16]. It generalizes to space curves and, generally, objects of codimension higher than 1 by means of the Chow form, which is a generalization of resultants to N-variate systems with more than N+1 polynomials [14].

Another powerful matrix representation of geometric objects is based on syzygies. The corresponding theory, including μ

-bases, has been developed for parametric models

[3, 4, 29]. The computation of syzygies can exploit the sparse elimination setting [2] and, moreover, can be achieved for point cloud models [14]. Roughly, syzygies of a sufficiently high degree define moving curves or surfaces that “follow” the parametric object. One forms the matrix expressing these moving curves and/or surfaces, which represents the geometric object because its rank at some point p drops if and only if p belongs to the algebraic closure of the image of the parameterization [3].