The goal of this investigation is effective method of key exchange which based on non-commutative group G. The results of Ko et al. <cit.> is improved and generalized. The size of a minimal generating set for the commutator subgroup of Sylow 2-subgroups of alternating group is found. The structure of the commutator subgroup of Sylow 2-subgroups of the alternating group A_2^k is investigated and used in key exchange protocol which based on non-commutative group. We consider non-commutative generalization of CDH problem <cit.> on base of metacyclic group of Miller-Moreno type (minimal non-abelian group). We show that conjugacy problem in this group is intractable. Effectivity of computation is provided due to using groups of residues by modulo n. The algorithm of generating (designing) common key in non-commutative group with 2 mutually commuting subgroups is constructed by us. 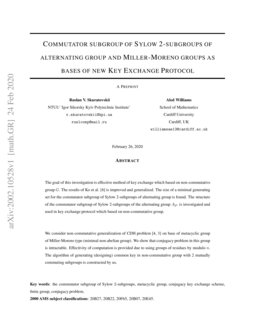 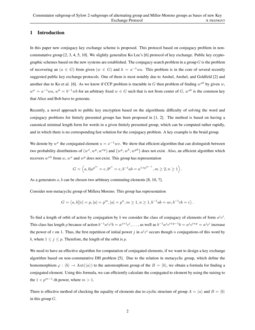 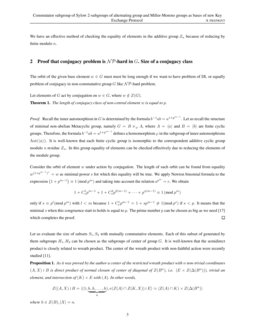 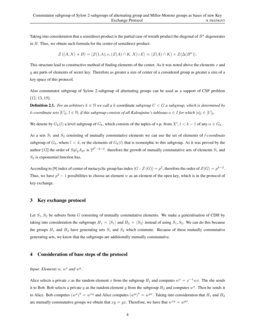 We consider a key-exchange protocol based on matrices over a tropical se...
Dylan Rudy, et al. ∙

To any nilpotent group of class n, one can associate a non-interactive k...
Delaram Kahrobaei, et al. ∙

A New Cryptosystem Based on Positive Braids

The Indus Script and Economics. A Role for Indus Seals and Tablets in Rationing and Administration of Labor

In this paper new conjugacy key exchange scheme is proposed. This protocol based on conjugacy problem in non-commutative group [2, 3, 4, 5, 10]. We slightly generalize Ko Lee’s [6] protocol of key exchange. Public key cryptographic schemes based on the new systems are established. The conjugacy search problem in a group G is the problem of recovering an (a∈G) from given (w∈G) and h=a−1wa. This problem is in the core of several recently suggested public key exchange protocols. One of them is most notably due to Anshel, Anshel, and Goldfeld [2] and another due to Ko et al. [6]. As we know if CCP problem is tractable in G then problem of finding wab by given w, wa=a−1wa, wb=b−1wb for an arbitrary fixed w∈G such that is not from center of G, wab is the common key that Alice and Bob have to generate.

Recently, a novel approach to public key encryption based on the algorithmic difficulty of solving the word and conjugacy problems for finitely presented groups has been proposed in [1, 2]. The method is based on having a canonical minimal length form for words in a given finitely presented group, which can be computed rather rapidly, and in which there is no corresponding fast solution for the conjugacy problem. A key example is the braid group.

We denote by wx the conjugated element u=x−1wx

. We show that efficient algorithm that can distinguish between two probability distributions of

As a generators a,b can be chosen two arbitrary commuting elements [8, 10, 7].

Consider non-metacyclic group of Millera Moreno. This group has representation

To find a length of orbit of action by conjugation by b we consider the class of conjugacy of elements of form ajci. This class has length p because of action b−1ajcib=aj+1ci,…, as well as b−1ajci+p−1b=ajci+p=ajci increase the power of c on 1. Thus, the first repetition of initial power j in ajci occurs though n conjugations of this word by b, where 1≤j≤p. Therefore, the length of the orbit is p.

We need to have an effective algorithm for computation of conjugated elements, if we want to design a key exchange algorithm based on non-commutative DH problem [5]. Due to the relation in metacyclic group, which define the homomorphism φ:⟨b⟩→Aut(⟨a⟩) to the automorphism group of the B=⟨b⟩, we obtain a formula for finding a conjugated element. Using this formula, we can efficiently calculate the conjugated to element by using the raising to the 1+pm−1-th power, where m>1.

There is effective method of checking the equality of elements due to cyclic structure of group A=⟨a⟩ and B=⟨b⟩ in this group G.

We have an effective method of checking the equality of elements in the additive group Zn because of reducing by finite modulo n.

2 Proof that conjugacy problem is NP-hard in G. Size of a conjugacy class

The orbit of the given base element w∈G must must be long enough if we want to have problem of DL or equally problem of conjugacy in non-commutative group G like NP-hard problem.

Let elements of G act by conjugation on w∈G, where w∉Z(G).

The length of conjugacy class of non-central element w is equal to p.

Recall the inner automorphism in G is determined by the formula b−1ab=a1+pm−1. Let us recall the structure of minimal non-abelian Metacyclic group, namely G=B⋉φA, where A=⟨a⟩ and B=⟨b⟩ are finite cyclic groups. Therefore, the formula b−1ab=a1+pm−1 defines a homomorphism φ in the subgroup of inner automorphisms Aut(⟨a⟩). It is well-known that each finite cyclic group is isomorphic to the correspondent additive cyclic group modulo n residue Zn. In this group equality of elements can be checked effectively due to reducing the elements of the module group.

Consider the orbit of element w under action by conjugation. The length of such orbit can be found from equality w(1+pm−1)s=w as minimal power s for which this equality will be true. We apply Newton binomial formula to the expression (1+pm−1)≡1(mod pm) and taking into account the relation apm=e. We obtain

only if s≡pl(mod pm) with l<m because 1+C1spm−1=1+spm−1≢1(mod ps) if s<p. It means that the minimal s when this congruence start to holds is equal to p. The prime number p can be chosen as big as we need [17] which completes the proof. ∎

Let us evaluate the size of subsets S1,S2 with mutually commutative elements. Each of this subset of generated by them subgroups H1,H2 can be chosen as the subgroups of center of group G. It is well-known that the semidirect product is closely related to wreath product. The center of the wreath product with non-faithful action were recently studied [11].

As it was proved by the author a center of the restricted wreath product with n non-trivial coordinates (A,X)≀B is direct product of normal closure of center of diagonal of Z(Bn), i.e. (E×Z(Δ(Bn))), trivial an element, and intersection of (K)×E with (A). In other words,

Also commutator subgroup of Sylow 2-subgroup of alternating groups can be used as a support of CSP problem [12, 13, 15].

We denote by Gk(l) a level subgroup of Gk, which consists of the tuples of v.p. from Xl, l<k−1 of any α∈Gk.

According to [9] index of center of metacyclic group has index |G:Z(G)|=p2, therefore the order of Z(G)=pk−2. Thus, we have p2−1 possibilities to choose an element w as an element of the open key, which is in the protocol of key exchange.

4 Consideration of base steps of the protocol

Alice selects a private x as the random element x from the subgroup H1 and computes wx=x−1wx. The she sends it to Bob. Bob selects a private y as the random element y from the subgroup H2 and computes wx. Then he sends it to Alice. Bob computes (wx)y=wxy and Alice computes (wy)x=wyx. Taking into consideration that H1 and H2 are mutually commutative groups we obtain that xy=yx. Therefore, we have that wxy=wyx.

Output: wxy that is the common key of Alice and Bob.

We can choose mutually commutative H1,H2 as subgroups of Z(G). As we said above, x,y are chosen from H1,H2 as components of key. According to [8] Z(G)=pn+m−2 so size of key-space is O(pn+m−2). It should be noted that the size of key-space can be chosen as arbitrary big number by choosing the parameters p,n,m. As an element for exponenting we can choose an arbitrary element w∈A but w≠e, because the size of orbit in result of action of inner automorphism φ is always not less than p.