Community Detection with Node Attributes and its Generalization

Community detection algorithms are fundamental tools to understand organizational principles in social networks. With the increasing power of social media platforms, when detecting communities there are two possi- ble sources of information one can use: the structure of social network and node attributes. However structure of social networks and node attributes are often interpreted separately in the research of community detection. When these two sources are interpreted simultaneously, one common as- sumption shared by previous studies is that nodes attributes are correlated with communities. In this paper, we present a model that is capable of combining topology information and nodes attributes information with- out assuming correlation. This new model can recover communities with higher accuracy even when node attributes and communities are uncorre- lated. We derive the detectability threshold for this model and use Belief Propagation (BP) to make inference. This algorithm is optimal in the sense that it can recover community all the way down to the threshold. This new model is also with the potential to handle edge content and dynamic settings. 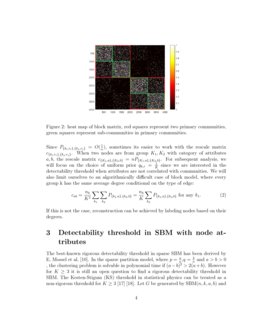 Community detection is one of the critical issues when understanding social networks. In many real-world networks (e.g. Facebook, Twitter), in addition to topology of social network, content information is available as well. Even though different sources of information about social networks can be collected via social media, node attributes and the structure of networks are often interpreted separately in the research of community detection. Usually the primary attention of algorithms has only focused on the topology of the social networks while on the other hand, the decision of community assignments has been made solely based on node attributes. The partial use of data is tremendously inefficient. Sometimes, especially when the network is sparse, algorithms which are incapable of incorporating multiple data sources are often paralyzed and unsuccessful in recovering community assignment. It is of great interests to study how to incorporate topology features and node attributes into one algorithm.

developed Communities from Edge Structure and Node Attributes (CESNA) for detecting overlapping networks communities with node attributes. In CESNA model, the links are generated by process of BigCLAM and node attributes can be estimated by separate logistic models. B.F. Cai et al.

[4] proposed a popularity-productivity stochastic block model with a discriminative framework (PPSB-DC) as the probabilistic generative model. Y.Chen et al. [5] adopted Bayesian method and developed Bayesian nonparametric attribute (BNPA) model. A nonparametric method was introduced to determine the number of communities automatically. These probabilistic generative models can be further categorized based on two different ways of modeling the stochastic relationship between attributes X, communities F and graph G. CESNA and BNPA assume that communities “generate” both the network as well as attributes (Figure 1 (c) ) however PPSB-DC assumes that communities can be predicted based on attributes and then network are generated based on communities (Figure 1 (d) ).

Another important problem of interests is to understand to which extend the extra information of node attributes will improve the performance, especially when communities and node attributes are not correlated. Here we are focusing on the detectability threshold for our new model. E. Mossel et al. [10]

have proven that there exists a phase transition in the detectability of communities for two equal size communities in stochastic block model. S. Heimlicher et al.

We formally describe the generative process of a graph G={V,E,x1,x2,…,xm} under stochastic block model with node attributes, where x represents attributes, as follows. First, we construct an one-to-one map of node attributes from m-dimensional point {x1,x2,…,xm} to 1-dimensional point {Xr}, where m is the number of different types of observed attributes and r is from 1 to R. Then we assign each of the n nodes i∈V into R group according to node attributes and the number of nodes in each group is nr. Using a prior qk,r, we assign nr nodes in attributes category r into K communities. We then generate the (i,j)th element in adjacency matrix A

ccording to a Bernoulli distribution with probability

Since P{ki,ri},{kj,rj}=O(1n), sometimes it’s easier to work with the rescale matrix c{ki,ri},{kj,rj}. When two nodes are from group K1,K2 with category of attributes a,b, the rescale matrix c{K1,a},{K2,b}=nP{K1,a},{K2,b}. For subsequent analysis, we will focus on the choice of uniform prior qk,r=1K since we are interested in the detectability threshold when attributes are not correlated with communities. We will also limit ourselves to an algorithmically difficult case of block model, where every group k has the same average degree conditional on the type of edge:

If this is not the case, reconstruction can be achieved by labeling nodes based on their degrees.

The best-known rigorous detectability threshold in sparse SBM has been derived by E. Mossel et al. [10]. In the sparse partition model, where p=an,q=bn and a>b>0 , the clustering problem is solvable in polynomial time if (a−b)2>2(a+b). However for K≥3 it is still an open question to find a rigorous detectability threshold in SBM. The Kesten-Stigum (KS) threshold in statistical physics can be treated as a non-rigorous threshold for K≥3 [17] [18]. Let G be generated by SBM(n,k,a,b) and define SNR=|a−b|√k(a+(k−1)b). If SNR>1 then the clustering problem is solvable and the Kesten-Stigum (KS) threshold can be achieved in polynomial time. In the sparse regime, |E|=O(n), the graph generated by SBM is locally treelike in the sense that all most all nodes in the giant component have a neighborhood which is a tree up to distance O(log(n)). Therefore the threshold for reconstruction on tree can provide good insight into reconstruction on SBM.

As mentioned before, one intuition is that node attributes label the edges, therefore we consider a multi-type branching process of edges to generate the tree that approximates the graph generated by SBM with node attributes. By defining a Markov chain on the infinite tree

T=(V,E,X), we can derive the construction thresholds on SBM with node attributes.

To construct the multi-type branching process, we first label the edge by the categories of node attributes at the two ends of the edge as L{Xa,Xb}, where Xa is the attributes for the node that is closer to the root, Xb is the attributes for the node at the far-end and a,b is from 1 to R. So there are R2 different types of edges. Map {Xa,Xb} to (a−1)∗R+b and relabel the L{Xa,Xb} type edge as L{(a−1)∗R+b}. Let R2∗R2 dimensional matrix C be the matrix describing the expected number of children, where cij is the expected number of type L{i} edges induced by one type L{j} edge. Note that one L{Xa1,Xb1} type of edge will give birth to L{Xa2,Xb2}type of edges if and only if b1=a2. Let x=[i−1R]+1 and y=i−[i−1R] and z=j−[j−1R],

When moving outward a type L{Xa,Xb} edge, the K∗K stochastic transition matrix σ associate with the edge can be defined as:

The largest eigenvalue for the

To recover the community assignments in SBM with node attributes, we use Bayesian inference to learn the latent community:

where k is the estimated group assignment and g is the original group assignment. The distribution is too complex to compute directly since∑gP(E|g,X,P) runs over exponential number of terms. In the regime |E|=O(n), the graph is locally treelike therefore belief propagation, which is exact to calculate the marginal probability of community assignment on a tree, can be applied to calculate Bayesian inference efficiently. We’ll show that BP is an optimal algorithm in the sense that it can reach the detectability thresholds for SBM with node attributes.

To write the belief propagation equation, we define conditional marginal probability, denoted as ψi→jki, which is the probability that node i belongs to group ki in the absence of node j. We can compute the messenger from i to j as:

where Ail is the (i,l)th element in the adjacency matrix for the graph generated by SBM with node attributes, ∂i denotes all the nodes connected to i and Zi→j is a normalization constant ensuring ψi→jki

ψiki can be calculated as:

where Zi is a normalization constant ensuring ψiki to be a probability distribution. In SBM with node attributes, we have interactions between all pairs of nodes, therefore we have n(n−1) messengers to update for one iteration. To reduce the computational complexity to O(n), we follow past work on BP for SBM citeDecelle. At the cost of making O(1n) approximation to the messenger, when there is no edge between i andj, the messenger from i to j can be calculated as:

Now only messengers sent on edges are needed to be calculated. By introducing an external field, the messenger from i to j when there is an edge between i and j can be approximated as:

where the external field hkiri can be defined as:

It’s worth noting that ψi→jki=qkiri is a fixed point in (9).

5 Phase transition in BP and simulation

In this section, we will study the stability of the fixed point under random perturbations. As discussed above, in the sparse regime, the graph generated by SBM with node attributes is locally treelike. Here consider such a tree with d levels. On the leave md the fixed point is perturbed as ψmdkmd=qkmdrmd+ϵmdkmd, where ϵmdkmd is i.i.d.random variable. Then the influence of perturbation on leave md to the root m0 can be calculated as:

. Now let us consider the variance at root

m0 induced by the random perturbation on all leaves at level d. Since the influence of each leaf is independent, the variance of the root can be written as:

-dimensional unit vector with the

rth element equal to 1 and r is the node attribute type of the root node m0. When the largest eigenvalue of M2 exceeds 1, the fixed point of BP is unstable and the community is detectable. Noting that λab=υab, therefore BP is an optimal algorithm in the sense that it can reach the detectability threshold in SBM with node attributes even when node attributes and communities are not correlated.

where a≥b≥c. For SBM with node attributes, the community is detectable if

For SBM without information of node attributes, the community is detactable if

By simple calculation, it can be shown that ξ1≥ξ2, therefore even in the situation where the observed node attributes are uncorrelated with communities, including node attributes into model will give us more infomation about communities.

We conduct the following simulation to verify the claim of phase transition in BP. Considering for simplicity only two communities and two node attributes, we generate a series of graphs by SBM with node attributes for 4000 nodes and various choice of (a,b) when controlling average degree to be 5. We use η=ab to represnt different choices of (a,b) and ϵ=cb to represent the strength of communities. When ϵ=0 the clusterings are maximally strong while at ϵ=1 the clusterings are weak. The accuracy of reconstruction is measure by overlap matric introduced by [19].

In figure 3, we plot overlap metric against ϵ for different values of η and for each curve, we use a vertical dash line in the same color as the corresponding curve to indicate the detectability threshold. Figure 3 shows that BP can recover communities that are positively correlated with true communities all the way down to the detectability thresholds for various choice of (ϵ,η). The algorithm has larger overlap metric with smaller ϵ.

A nature extension will include edge contents and dynamic settings into the model. Our approach can be applied to this case by including different type of edges into the multi-branching process. On the theoretical front, it has been conjectured [10] that, for K≥5, there’s a regime that the clustering problem is solvable but not in polynomial time. Emmanuel Abbe and Colin Sandon [20] have developed a non-efficient algorithm that is shown to break down KS threshold at K=5 in SBM. As a future work, we’ll try to develop an algorithm that can break down the detectability threshold in our model for large numbers of groups.

I am grateful to Professor Wenxin Jiang and Professor Noshir Contractor for helpful discussion.