We devise a one-shot approach to distributed sparse regression in the high-dimensional setting. The key idea is to average "debiased" or "desparsified" lasso estimators. We show the approach converges at the same rate as the lasso as long as the dataset is not split across too many machines. We also extend the approach to generalized linear models. 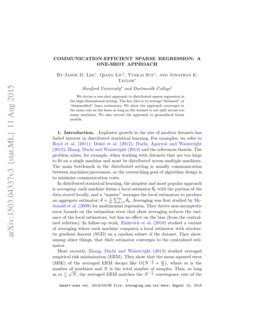 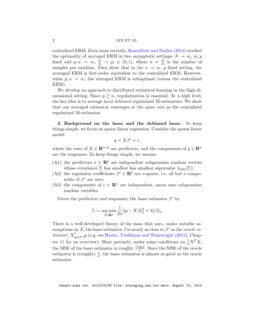 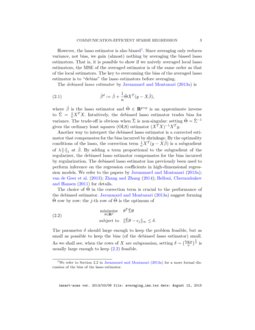 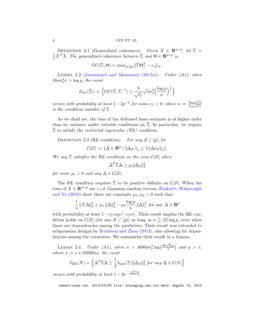 Explosive growth in the size of modern datasets has fueled interest in distributed statistical learning. For examples, we refer to Boyd et al. (2011); Dekel et al. (2012); Duchi, Agarwal and Wainwright (2012); Zhang, Duchi and Wainwright (2013) and the references therein. The problem arises, for example, when working with datasets that are too large to fit on a single machine and must be distributed across multiple machines. The main bottleneck in the distributed setting is usually communication between machines/processors, so the overarching goal of algorithm design is to minimize communication costs.

In distributed statistical learning, the simplest and most popular approach is averaging: each machine forms a local estimator ^θk with the portion of the data stored locally, and a “master” averages the local estimators to produce an aggregate estimator: ¯θ=1m∑mk=1^θk. Averaging was first studied by Mcdonald et al. (2009)

for multinomial regression. They derive non-asymptotic error bounds on the estimation error that show averaging reduces the variance of the local estimators, but has no effect on the bias (from the centralized solution). In follow-up work,

studied a variant of averaging where each machine computes a local estimator with stochastic gradient descent (SGD) on a random subset of the dataset. They show, among other things, that their estimator converges to the centralized estimator.

2 Background on the lasso and the debiased lasso

where the rows of X∈Rn×p are predictors, and the components of y∈Rn are the responses. To keep things simple, we assume

Given the predictors and responses, the lasso estimates β∗ by

The debiased lasso estimator by Javanmard and Montanari (2013a) is

where ^β is the lasso estimator and ^Θ∈Rp×p is an approximate inverse to ^Σ=1nXTX. Intuitively, the debiased lasso estimator trades bias for variance. The trade-off is obvious when ^Σ is non-singular: setting ^Θ=^Σ−1

The choice of ^Θ in the correction term is crucial to the performance of the debiased estimator. Javanmard and Montanari (2013a) suggest forming ^Θ row by row: the j-th row of ^Θ is the optimum of

occurs with probability at least

As we shall see, the bias of the debiased lasso estimate is of higher order than its variance under suitable conditions on ^Σ. In particular, we require ^Σ to satisfy the restricted eigenvalue (RE) condition.

The RE condition requires ^Σ to be positive definite on C(S). When the rows of X∈Rn×p are i.i.d. Gaussian random vectors, Raskutti, Wainwright and Yu (2010) show there are constants μ1,μ2>0 such that

When the RE condition holds, the lasso and debiased lasso estimators are consistent for a suitable choice of the regularization parameter λ. The parameter λ should be large enough to dominate the “empirical process” part of the problem: 1n∥∥XTy∥∥∞, but as small as possible to reduce the bias incurred by regularization. As we shall see, setting λ∼σy(logpn)12 is a good choice.

with probability at least 1−ep−2 for any (non-random) X∈Rn×p.

When ^Σ satisfies the RE condition and λ is large enough, the lasso and debiased lasso estimators are consistent.

Under (A2) and (A3), suppose ^Σ satisfies the RE condition on C∗ with constant μl and 1n∥XTϵ∥∞≤λ,

Under the conditions of Lemma 2.6, when (^Σ,^Θ) has generalized incoherence δ, the debiased lasso estimator has the form

Lemma 2.7, together with Lemmas 2.5 and 2.2, shows that the bias of the debiased lasso estimator is of higher order than its variance. In particular, setting λ and δ according to Lemmas 2.5 and 2.2 gives a bias term ∥^Δ∥∞ that is O(slogpn). By comparison, the variance term 1n∥^ΘXTϵ∥∞ is the maximum of p subgaussian random variables with mean zero and variances of O(1), which is O((logpn)12). Thus the bias term is of higher order than the variance term as long as n≳s2logp.

Recall the problem setup: we are given N samples of the form (xi,yi) distributed across m machines:

The k-th machine has local predictors Xk∈Rnk×p and responses yk∈Rnk. To keep things simple, we assume the data is evenly distributed, i.e. n1=⋯=nk=n=Nm. The averaged debiased lasso estimator (for lack of a better name) is

We study the error of the averaged debiased lasso in the ℓ∞ norm.

Suppose the local sparse regression problem on each machine satisfies the conditions of Corollary 2.8, that is when m≤p,

Lemma 3.1 hints at the performance of the averaged debiased lasso. In particular, we note the first term is O((logpN)12), which matches the convergence rate of the centralized estimator. When n is large enough, slogpn is negligible compared to (logpN)12, and the error is O((logpN)12).

Finally, we show the conditions of Lemma 3.1 occur with high probability when the rows of X are independent subgaussian random vectors.

with probability at least 1−(8+e)p−1 for some universal constant c>0.

We start with the conclusion of Lemma 3.1:

for some universal constant c1>0.

with probability at least 1−2pe−c1min{nσ2x,nσx}.

for some universal constant c1>0.

We put the pieces together to obtain the stated result:

As we shall see, both hard and soft-thresholding give sparse aggregates that are close to β∗ in ℓ2 norm.

By the triangle inequality,

The argument for ¯βst is similar. ∎

By combining Lemma 3.5 with Theorem 3.2, we show that ¯βht converges at the same rates as the centralized lasso.

Under the conditions of Theorem 3.2, hard-thresholding ¯β at gives

By Theorem 3.6, when m≲ns2logp, the variance term is dominant and the convergence rates given by the theorem simplify:

The convergence rates for the centralized lasso estimator ^β are identical (modulo constants):

The estimator ¯βht matches the convergence rates of the centralized lasso in ℓ1, ℓ2, and ℓ∞ norms. Furthermore, ¯βht can be evaluated in a communication-efficient manner by a one-shot averaging approach.

4 A distributed approach to debiasing

The averaged estimator we studied has the form

The estimator requires each machine to form ^Θk by the solution of (2.2). Since the dual of (2.2) is an ℓ1-regularized quadratic program:

forming ^Θk is (roughly speaking) p times as expensive as solving the local lasso problem, making it the most expensive step (in terms of FLOPS) of evaluating the averaged estimator. To trim the cost of the debiasing step, we consider an estimator that forms only a single ^Θ:

As we shall see, each machine can perform debiasing with only the data stored locally. Thus, forming the estimator (4.2) requires two rounds of communication.

The question that remains is how to form ^Θj,⋅. We consider an estimator proposed by van de Geer et al. (2013): nodewise regression on the predictors. For some j∈[p] that machine k is debiasing, the machine solves

where Xk,−j∈Rn×(p−1) is Xk less its j-th column Xk,j. Implicitly, we are forming

Since ^γj and ^τj only depend on Xk, they can be formed without any communication.

Before we justify the choice of ^Θ theoretically, we mention that it is a approximate “inverse” of ^Σ (in a component-wise sense). By the optimality conditions of nodewise regression,

Recalling the defintition of ^Θ, we have