Communicating over the Torn-Paper Channel

We consider the problem of communicating over a channel that randomly "tears" the message block into small pieces of different sizes and shuffles them. For the binary torn-paper channel with block length n and pieces of length Geometric(p_n), we characterize the capacity as C = e^-α, where α = lim_n→∞ p_n log n. Our results show that the case of Geometric(p_n)-length fragments and the case of deterministic length-(1/p_n) fragments are qualitatively different and, surprisingly, the capacity of the former is larger. Intuitively, this is due to the fact that, in the random fragments case, large fragments are sometimes observed, which boosts the capacity. 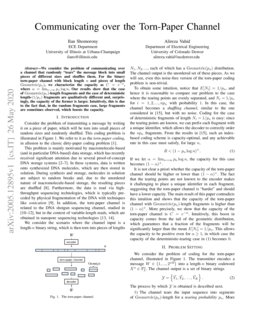 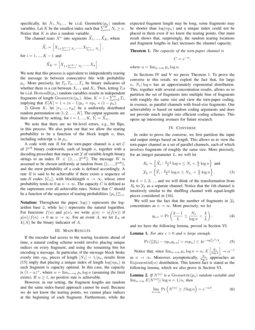 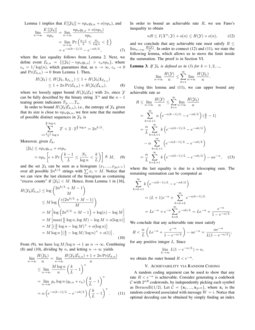 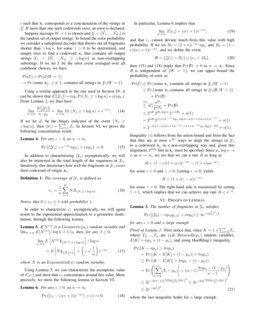 Consider the problem of transmitting a message by writing it on a piece of paper, which will be torn into small pieces of random sizes and randomly shuffled. This coding problem is illustrated in Figure 1. We refer to it as the torn-paper coding, in allusion to the classic dirty-paper coding problem [dirtypaper].

This problem is mainly motivated by macromolecule-based (and in particular DNA-based) data storage, which has recently received significant attention due to several proof-of-concept DNA storage systems [church_next-generation_2012, goldman_towards_2013, grass_robust_2015, bornholt_dna-based_2016, erlich_dna_2016, organick_scaling_2017]. In these systems, data is written onto synthesized DNA molecules, which are then stored in solution. During synthesis and storage, molecules in solution are subject to random breaks and, due to the unordered nature of macromolecule-based storage, the resulting pieces are shuffled [heckel_characterization_2018]. Furthermore, the data is read via high-throughput sequencing technologies, which is typically preceded by physical fragmentation of the DNA with techniques like sonication [pomraning2012library]. In addition, the torn-paper channel is related to the DNA shotgun sequencing channel, studied in [MotahariDNA, BBT, gabrys2018unique], but in the context of variable-length reads, which are obtained in nanopore sequencing technologies [laver2015assessing, mao2018models].

We consider the scenario where the channel input is a length-n binary string, which is then torn into pieces of lengths N1,N2,..., each of which has a Geometric(pn) distribution. The channel output is the unordered set of these pieces. As we will see, even this noise-free version of the torn-paper coding problem is non-trivial.

To obtain some intuition, notice that E[Ni]=1/pn, and hence it is reasonable to compare our problem to the case where the tearing points are evenly separated, and Ni=1/pn for i=1,2,...,npn

1. In this case, the channel becomes a shuffling channel, similar to the one considered in [noisyshuffling], but with no noise. Coding for the case of deterministic fragments of length Ni=1/pn is easy: since the tearing points are known, we can prefix each fragment with a unique identifier, which allows the decoder to correctly order the npn fragments. From the results in [noisyshuffling], such an index-based coding scheme is capacity-optimal, and any achievable rate in this case must satisfy, for large n,

If we let α=limn→∞pnlogn, the capacity for this case becomes (1−α)+.

. Intuitively, this boost in capacity comes from the tail of the geometric distribution, which guarantees that a fraction of the fragments will be significantly larger than the mean

E[Ni]=1/pn. This allows the capacity to be positive even for α≥1, in which case the capacity of the deterministic-tearing case in (1) becomes 0.

We consider the problem of coding for the torn-paper channel, illustrated in Figure 1. The transmitter encodes a message W∈{1,...,2nR} into a length-n binary codeword Xn∈Fn2. The channel output is a set of binary strings

The process by which Y is obtained is described next.

We note that there are no bit-level errors, e.g., bit flips, in this process. We also point out that we allow the tearing probability to be a function of the block length n, thus, including subscript n in pn.

A code with rate R for the torn-paper channel is a set C of 2nR binary codewords, each of length n, together with a decoding procedure that maps a set Y of variable-length binary strings to an index ^W∈{1,...,2nR}. The message W is assumed to be chosen uniformly at random from {1,...,2nR}, and the error probability of a code is defined accordingly. A rate R is said to be achievable if there exists a sequence of rate-R codes {Cn}, with blocklength n→∞, whose error probability tends to 0 as n→∞. The capacity C is defined as the supremum over all achievable rates. Notice that C should be a function of the sequence of tearing probabilities {pn}∞n=1.

If the encoder had access to the tearing locations ahead of time, a natural coding scheme would involve placing unique indices on every fragment, and using the remaining bits for encoding a message. In particular, if the message block broke evenly into npn pieces of length [N1]=1/pn, results from [noisyshuffling] imply that placing a unique index of length log(npn) in each fragment is capacity optimal. In this case, the capacity is (1−α)+, where α=limn→∞pnlogn (assuming the limit exists). If α≥1, no positive rate is achievable.

However, in our setting, the fragment lengths are random and the same index-based approach cannot be used. Because we do not know the tearing points, we cannot place indices at the beginning of each fragment. Furthermore, while the expected fragment length may be long, some fragments may be shorter than log(npn) and a unique index could not be placed in them even if we knew the tearing points. Our main result shows that, surprisingly, the random tearing locations and fragment lengths in fact increases the channel capacity.

The capacity of the torn-paper channel is

In Sections IV and V we prove Theorem 1. To prove the converse to this result, we exploit the fact that, for large n, Ni/logn

has an approximately exponential distribution. This, together with several concentration results, allows us to partition the set of fragments into multiple bins of fragments with roughly the same size and view the torn-paper coding, in essence, as parallel channels with fixed-size fragments. Our achievability is based on random coding arguments and does not provide much insight into efficient coding schemes. This opens up interesting avenues for future research.

In order to prove the converse, we first partition the input and output strings based on length. This allows us to view the torn-paper channel as a set of parallel channels, each of which involves fragments of roughly the same size. More precisely, for an integer parameter L, we will let

for k=1,2,..., and we will think of the transformation from Xk to Yk as a separate channel. Notice that the kth channel is intuitively similar to the shuffling channel with equal-length pieces considered in [DNAStorageISIT].

We will use the fact that the number of fragments in Yk concentrates as n→∞. More precisely, we let

and we have the following lemma, proved in Section VI.

For any ϵ>0 and n large enough,

Notice that, since limn→∞pnlogn=α, E[N1logn]→α−1 as n→∞. Moreover, asymptotically, N1logn approaches an Exponential(α) distribution. This known fact is stated as the following lemma, which we also prove in Section VI.

where we loosely upper bound H(Yk|Ek) with 2n, since Y can be fully described by the binary string Xn and the n−1 tearing points indicators T2,...,Tn.

In order to bound H(Yk|¯Ek,n), i.e., the entropy of Yk given that its size is close to npnqk,n, we first note that the number of possible distinct sequences in Yk is

and the set Yk can be seen as a histogram (x1,...,x2nk/L) over all possible 2nk/L strings with ∑xi=M. Notice that we can view the last element of the histogram as containing “excess counts” if |Yk|<M. Hence, from Lemma 1 in [DNAStorageISIT],

In order to bound an achievable rate R, we use Fano’s inequality to obtain

and we conclude that any achievable rate must satisfy R≤limn→∞H(Y)n. In order to connect (12) and (11), we state the following lemma, which allows us to move the limit inside the summation. The proof is in Section VI.

Using this lemma and (11), we can upper bound any achievable rate as

where the last equality is due to a telescoping sum. The remaining summation can be computed as

We conclude that any achievable rate must satisfy

for any positive integer L. Since

we obtain the outer bound R<e−α.

A random coding argument can be used to show that any rate R<e−α is achievable. Consider generating a codebook C with 2nR codewords, by independently picking each symbol as Bernoulli(1/2). Let C={x1,...,x2nR}, where xi is the random codeword associated with message W=i. Notice that optimal decoding can be obtained by simply finding an index i such that xi corresponds to a concatenation of the strings in Y. If more than one such codewords exist, an error is declared.

Suppose message W=1 is chosen and Y={→Y1,...,→YK} is the random set of output strings. To bound the error probability we consider a suboptimal decoder that throws out all fragments shorter than γlogn, for some γ>0 to be determined, and simply tries to find a codeword xi that contains all output strings Yγ={→Yi:Nπi≥γlogn} as non-overlapping substrings. If we let E be the error event averaged over all codebook choices, we have

Using a similar approach to the one used in Section IV, it can be shown that E[|Yγ|]=npnPr(N1≥γlogn)+o(npn). From Lemma 2, we thus have

If we let Zi be the binary indicator of the event {Ni≥γlogn}, then |Yγ|=∑Ki=1Zi. In Section VI, we prove the following concentration result.

In addition to characterizing |Yγ| asymptotically, we will also be interested in the total length of the sequences in Yγ. Intuitively, this determines how well the fragments in Yγ cover their codeword of origin x1.

The coverage of Yγ is defined as

Notice that 0≤cγ≤1 with probability 1.

In order to characterize cγ asymptotically, we will again resort to the exponential approximation to a geometric distribution, through the following lemma.

where ~N is an Exponential(α) random variable.

Using Lemma 5, we can characterize the asymptotic value of E[cγ] and show that cγ concentrates around this value. More precisely, we show the following lemma in Section VI.

In particular, Lemma 6 implies that

and that cγ cannot deviate much from this value with high probability. If we let B1=(1+ϵ)e−αγnpn and B2=(1−ϵ)(αγ+1)e−αγ, and we define the event

Inequality (i) follows from the union bound and from the fact that thre are at most nB1 ways to align the strings in Yγ to a codeword xj in a non-overlapping way and, given this alignment, 2nB2 bits in xj must be specified. Since pnlogn→α as n→∞, we see that we can a rate R as long as

for some γ>0. The right-hand side is maximized by setting γ=1, which implies that we can achieve any rate R<e−α.

The number of fragments in Yk satisfies

for any ϵ>0 and n large enough.

where the last inequality holds for n large enough.

where we used Hoeffding’s inequality and (21). ∎

If we define cγ as in Definition 1, from Lemma 6, we have

Moreover, from Lemma 6, the event

has vanishing probability as n→∞. This allows us to write

The number of fragments in Yγ satisfies

for any ϵ>0 and n large enough.

and the standard Hoeffding’s inequality can be applied. Moreover, from Lemma 2,

where we used Hoeffding’s inequality and (21). ∎