In this work we propose a method for reducing the dimensionality of tensor objects in a binary classification framework. The proposed Common Mode Patterns method takes into consideration the labels' information, and ensures that tensor objects that belong to different classes do not share common features after the reduction of their dimensionality. We experimentally validate the proposed supervised subspace learning technique and compared it against Multilinear Principal Component Analysis using a publicly available hyperspectral imaging dataset. Experimental results indicate that the proposed CMP method can efficiently reduce the dimensionality of tensor objects, while, at the same time, increasing the inter-class separability. 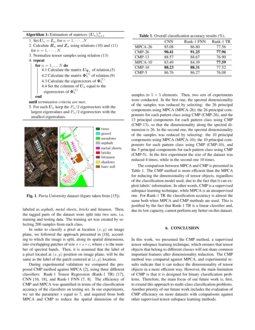 Advances in sensing technologies have led to the continuous generation of massive multidimensional data, used in a wide range of applications. Their successful exploitation, however, is directly linked to the effectiveness of pattern recognition methods employed for their analysis. Despite the high dimensionality, this kind of data is often characterized by large amounts of redundancy, occupying a subspace of the input space

. In this context, feature extraction for subspace learning plays a crucial role towards the mapping of high-dimensional data to a low-dimensional space

[2, 3, 4, 5]. However, feature extraction is often a challenging task due to the complex distribution of input data [6], especially in cases of limited training samples [7, 8].

The goal of feature extraction is to extract information regarding the underlying nature of the data. Unsupervised feature extraction methods in particular aim at capturing the principal statistical relation within the data and represent it in lower dimension spaces. This type of methods is referred to as unsupervised subspace learning and includes techniques such as 2D Principal Component Analysis (2D-PCA) [9], Generalized Low Rank Approximation of Matrices (GLRAM) [10], Concurrent Subspace Analysis [11] and Multilinear Principal Component Analysis (MPCA) [2]. Such methods can also decrease the computational cost of pattern recognition algorithms (e.g. for classification or regression) through the reduction of data dimensionality.

The main objective of pattern recognition, however, is the extraction of features capable of discriminating different classes. Although unsupervised subspace learning can provide a valuable tool for data analysis, the features extracted are not necessarily those salient features required to discriminate among pattern classes, since the problem of finding discriminative features is conceptually and fundamentally different than mapping data to a lower dimension space. Different sets of features should be used for different classes, which means that the feature extraction process should be conducted in a supervised manner (supervised subspace learning).

In this paper, we propose a supervised subspace learning method, which is motivated by the Common Spatial Patterns (CSP) [12, 13] algorithm. The CSP algorithm is based on a modification of the Karhunen-Loeve expansion [14], aiming at extracting features that increase inter-class separability. The application of CSP, however, is restricted to 2D data. Motivated by this fact, we extend the CSP algorithm to tensor objects of arbitrary order. In particular, we extract the common patterns corresponding to each mode of tensor objects - hence naming the former Common Mode Patterns (CMP) - that increase the separability between two classes.

Tensor matricization. Mode-n matricization maps a tensor B into a In×∏n′≠nIn′ matrix B(n), by arranging the mode-n fibers to be the columns of the resulting matrix.

Scalar product. The scalar product of two tensors A,B∈RI1×⋯×IN is denoted as ⟨A,B⟩ and is equal to ⟨vec(A),vec(B)⟩.

Tensor norm. The Frobenius norm of a tensor A is defined as ||A||F=√⟨A,A⟩.

We consider a binary classification problem, where the samples are tensor objects. Let {A(i)m∈RI1×I2×⋯×IN}Mim=1, i=1,2 be a set of Mi samples that belong to the i-th class, and {Un}Nn=1 a set of matrices, where Un∈RIn×Pn with Pn≤In. The projection of any A(i)m onto the subspace RP1,⋯,PN is defined as

In relation (5), the operator ⊗ denotes the Kronecker product.

onto a subspace, where the explained variance for each class is maximized, and the different properties of each class are emphasized. The projected samples thus minimize information loss and can discriminate between the two different pattern classes. By assuming that the variance of a class can be measured by the average total scatter of the tensor samples belonging to this class

[2], we can formally define the problem that needs to be solved for achieving the aforementioned objective.

for i=1,2, such that the projected samples that belong to different classes will not share common important features.

Remark 1. Suppose that {~Un,n=1,⋯,N} is a set of projection matrices that satisfies (6) either for i=1 or for i=2. Then, as is shown in [2], each matrix Un, n=1,⋯,N, consists of the Pneigenvectors corresponding to the largest Pneigenvalues of the matrix

where ~UΦn is as in (5). However, in Problem 1, the set of projection matrices should satisfy (6) both for i=1 and i=2, and, at the same time, the resulting projection should emphasize different sets of features for each class.

Suppose that we have at our disposal a set {B(i)m,m=1,⋯,Mi,i=1,2} of Mi raw tensor measurements (samples) in RI1×⋯×IN that belong to the i-th class. Based on these samples we can define the matrix

is symmetric. Hence, matrix R(i)n is also symmetric, since it is the weighted sum of symmetric matrices.

Let us define the symmetric matrix Rn=R(1)n+R(2)n. Since Rn is symmetric, there exists the transformation matrix

Following the above normalization process, we define the mode-n matricization of tensor objects {A(i)m}Mim=1, i=1,2 that need to be projected onto a subspace as

The normalization process takes place before the projection, and actually corresponds to a linear transformation, which is applied on the tensor objects.

Let us denote as C(i) the matrix

After the normalization process [see Eq. (12)]

The eigenvalues and eigenvectors of C(i)(n) are given by

The CMP algorithm is presented in Algorithm 1. Please note that during the estimation of the set {Un} only the Φ(1)n matrices are used. Φ(2)n matrices are not employed in the algorithm since matrices Φ(1)n and Φ(2)n have the same eigenvectors and reversely ordered eigenvalues.

In this study we validated the CMP methodology using a widely known and publicly available hyperspectral imaging dataset, named Pavia University, whose number of spectral bands is 103 (see Fig.1). Ground truth contains 9 classes, while pixels in white color are not annotated.

The CMP method was developed for binary classification problems. Thus, we grouped together pixels that depict man-made objects and discriminated them from the rest of the pixels. For this dataset, pixels that depict man-made objects are labeled as asphalt, metal sheets, bricks and bitumen. Then, the tagged parts of the dataset were split into two sets, i.e. training and testing data. The training set was created by selecting 200 samples from each class.

In order to classify a pixel at location

(x,y) on image plane, we followed the approach presented in [16], according to which the image is split, along its spatial dimensions, into overlapping patches of size s×s×c, where c is the number of spectral bands. Then, it is assumed that the label of a pixel located at (x,y) position on image plane, will be the same as the label of the patch centered at (x,y) location.

The comparison between MPCA and CMP is presented in Table 1. The CMP method is more efficient than the MPCA for reducing the dimensionality of tensor objects, regardless of the classification model used, due to the fact that it can exploit labels’ information. In other words, CMP is a supervised subspace learning technique, while MPCA is an unsupervised one. For Rank-1 TR the classification accuracy is almost the same both when MPCA and CMP methods are used. This is justified by the fact that Rank-1 TR is a linear classifier and, due its low capacity, cannot perform any better on this dataset.

In this work, we presented the CMP method, a supervised tensor subspace learning technique, which ensures that tensor objects that belong to different classes will not share common important features after dimensionality reduction. The CMP method was compared against MPCA, and experimental results indicate that it can reduce the dimensionality of tensor objects in a more efficient way. However, the main limitation of CMP is that it is designed for binary classification problems. Therefore, the main focus of our future work is, first, to extend this approach to multi-class classification problems. Another priority of our future work includes the evaluation of CMP efficiency on more datasets with comparisons against other supervised tensor subspace learning methods.