We give an information-theoretic interpretation of Canonical Correlation Analysis (CCA) via (relaxed) Wyner's common information. CCA permits to extract from two high-dimensional data sets low-dimensional descriptions (features) that capture the commonalities between the data sets, using a framework of correlations and linear transforms. Our interpretation first extracts the common information up to a pre-selected resolution level, and then projects this back onto each of the data sets. In the case of Gaussian statistics, this procedure precisely reduces to CCA, where the resolution level specifies the number of CCA components that are extracted. This also suggests a novel algorithm, Common Information Components Analysis (CICA), with several desirable features, including a natural extension to beyond just two data sets. 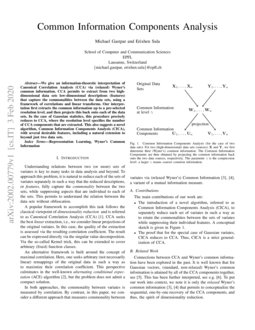 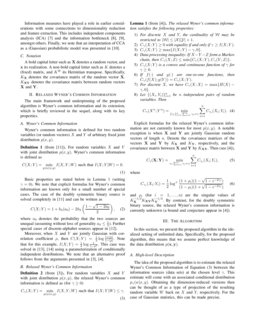 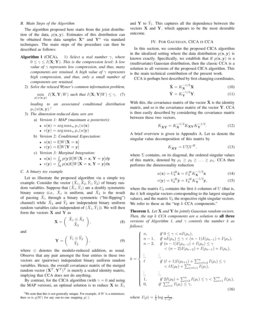 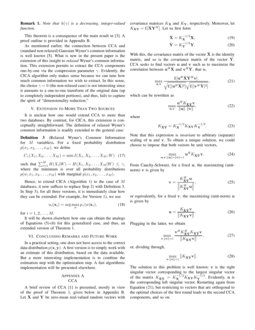 Understanding relations between two (or more) sets of variates is key to many tasks in data analysis and beyond. To approach this problem, it is natural to reduce each of the sets of variates separately in such a way that the reduced descriptions, or features, fully capture the commonality  between the two sets, while suppressing aspects that are individual to each of the sets. This permits to understand the relation between the data sets without obfuscation.

A popular framework to accomplish this task follows the classical viewpoint of dimensionality reduction and is referred to as Canonical Correlation Analysis (CCA) [1]. CCA seeks the best linear

extraction, i.e., we consider linear projections of the original variates. In this case, the quality of the extraction is assessed via the resulting correlation coefficient. The result can be expressed directly via the singular value decomposition. Via the so-called Kernel trick, this can be extended to cover arbitrary (fixed) function classes.

An alternative framework is built around the concept of maximal correlation. Here, one seeks arbitrary (not necessarily linear) remappings of the original data in such a way as to maximize their correlation coefficient. This perspective culminates in the well-known alternating conditional expectation  (ACE) algorithm [2], but the problem does not admit a compact solution.

The main contributions of our work are:

[5]. This has been further interpreted, see e.g. [6]. To put our work into context, we note it is only the relaxed Wyner’s common information [3, 4] that permits to conceptualize the sequential, one-by-one recovery of the CCA components, and thus, the spirit of dimensionality reduction.

Information measures have played a role in earlier considerations with some connections to dimensionality reduction and feature extraction. This includes independent components analysis (ICA)

[7] and the information bottleneck [8, 9], amongst others. Finally, we note that an interpretation of CCA as a (Gaussian) probabilistic model was presented in [10].

The main framework and underpinning of the proposed algorithm is Wyner’s common information and its extension, which is briefly reviewed in the sequel, along with its key properties.

For random variables X and Y with joint distribution p(x,y), Wyner’s common information is defined as

Basic properties are stated below in Lemma 1 (setting γ=0). We note that explicit formulas for Wyner’s common information are known only for a small number of special cases. The case of the doubly symmetric binary source is solved completely in [11] and can be written as

a0≤12). Further special cases of discrete-alphabet sources appear in [12].

Moreover, when X and Y are jointly Gaussian with correlation coefficient ρ, then C(X;Y)=12log1+|ρ|1−|ρ|. Note that for this example, I(X;Y)=12log11−ρ2. This case was solved in [13, 14] using a parameterization of conditionally independent distributions. We note that an alternative proof follows from the arguments presented in [3, 4].

For random variables X and Y with joint distribution p(x,y), the relaxed Wyner’s common information is defined as (for γ≥0)

and ρi (for i=1,…,n) are the singular values of K−1/2XKXYK−1/2Y. By contrast, for the doubly symmetric binary source, the relaxed Wyner’s common information is currently unknown (a bound and conjecture appear in [4]).

3) between the information sources (data sets) at the chosen level γ. This estimate will come with an associated conditional distribution pγ(w|x,y). Obtaining the dimension-reduced versions then can be thought of as a type of projection of the resulting random variable W back on X and Y, respectively. For the case of Gaussian statistics, this can be made precise.

Iii-B Main Steps of the Algorithm

The algorithm proposed here starts from the joint distribution of the data, p(x,y). Estimates of this distribution can be obtained from data samples Xn and Yn via standard techniques. The main steps of the procedure can then be described as follows:

Let us illustrate the proposed algorithm via a simple toy example. Consider the vector (~X1,~X2,~Y1,~Y2) of binary random variables. Suppose that (~X1,~Y1) are a doubly symmetric binary source (i.e.,  ~X1 is uniform, and ~X2 is the result of passing ~X1 through a binary symmetric (“bit-flipping”) channel) while ~X2 and ~Y2 are independent binary uniform random variables (also independent of (~X1,~Y1)). We will then form the vectors X and Y as

where ⊕ denotes the modulo-reduced addition, as usual. Observe that any pair amongst the four entries in these two vectors are (pairwise) independent binary uniform random variables. Hence, the overall covariance matrix of the merged random vector (XT,YT)T

is merely a scaled identity matrix, implying that CCA does not do anything.

By contrast, for the CICA algorithm (with γ=0 and using the MAP version), an optimal solution is to reduce X to ~X1 and Y to ~Y1. This captures all the dependence between the vectors X and Y, which appears to be the most desirable outcome.

Iv For Gaussian, CICA is CCA

In this section, we consider the proposed CICA algorithm in the idealized setting where the data distribution p(x,y) is known exactly. Specifically, we establish that if p(x,y)

is a (multivariate) Gaussian distribution, then the classic CCA is a solution to all versions of the proposed CICA algorithm. This is the main technical contribution of the present work.

A brief overview is given in Appendix A. Let us denote the singular value decomposition of this matrix by

where Σ contains, on its diagonal, the ordered singular values of this matrix, denoted by ρ1≥ρ2≥…≥ρn. CCA then performs the dimensonality reduction

Let X and Y be jointly Gaussian random vectors. Then, the top k CCA components are a solution to all three versions of Algorithm 1, and γ controls the number k as follows:

Note that k(γ) is a decreasing, integer-valued function.

This theorem is a consequence of the main result in [3]. A proof outline is provided in Appendix B.

As mentioned earlier, the connection between CCA and (standard non-relaxed) Gaussian Wyner’s common information is well known [5]. What is new in the present paper is the extension of this insight to relaxed Wyner’s common information. This extension permits to extract the CCA components one-by-one via the compression parameter γ. Evidently, the CICA algorithm only makes sense because we can tune how much common information we wish to extract. In this sense, the choice γ=0 (the non-relaxed case) is not interesting since it amounts to a one-to-one transform of the original data (up to completely independent portions), and thus, fails to capture the spirit of “dimensionality reduction.”

It is unclear how one would extend CCA to more than two databases. By contrast, for CICA, this extension is conceptually straightforward. The definition of relaxed Wyner’s common information is readily extended to the general case:

For a fixed probability distribution

Hence, to extend CICA (Algorithm 1) to the case of M databases, it now suffices to replace Step 2) with Definition 3. In Step 3), for all three versions, it is immediately clear how they can be extended. For example, for Version 1), we use

It will be shown elsewhere how one can obtain the analogs of Equations (5)-(6) for this generalized case, and thus, an extended version of Theorem 1.

In a practical setting, one does not have access to the correct data distribution p(x,y). A first version is to simply work with an estimate of this distribution, based on the data available. But a more interesting implementation is to combine the estimation step with the optimization step. A fast algorithmic implementation will be presented elsewhere.

A brief review of CCA [1] is presented, mostly in view of the proof of Theorem 1, given below in Appendix B. Let X and Y be zero-mean real-valued random vectors with covariance matrices KX and KY, respectively. Moreover, let KXY=E[XYH]. Let us first form

Note that this expression is invariant to arbitrary (separate) scaling of u and v. To obtain a unique solution, we could choose to impose that both vectors be unit vectors,

From Cauchy-Schwarz, for a fixed u, the maximizing (unit-norm) v is given by

or equivalently, for a fixed v, the maximizing (unit-norm) u is given by

Plugging in the latter, we obtain

Appendix B Proof Outline for Theorem 1

For the algorithm, we need the corresponding conditional marginals, pγ(w|x) and pγ(w|y). By symmetry, it suffices to prove one formula. Changing basis as in Equations (19)-(20), we can write

Finally, note that Equation (25) can be read as

where D is a diagonal matrix. Hence,

where ~D is the diagonal matrix

This is precisely the top k CCA components (note that the solution to the CCA problem (21) is only specified up to a scaling). This establishes the theorem for the case of Version 2) of the proposed algorithm. Clearly, it also establishes that pγ(w|x) is a Gaussian distribution with mean given by (37), thus establishing the theorem for Version 1) of the proposed algorithm. The proof for Version 3) follows along similar lines and is thus omitted.

This work was supported in part by the Swiss National Science Foundation under Grant 169294, Grant P2ELP2_165137.