Hidden-variable (HV) theories allege that a quantum state describes an ensemble of systems distinguished by the values of hidden variables. No-go theorems assert that HV theories cannot match the predictions of quantum theory. The present work started with repairing flaws in the literature on no-go theorems asserting that HV theories cannot predict the expectation values of measurements. That literature gives one an impression that expectation no-go theorems subsume the time-honored no-go theorems asserting that HV theories cannot predict the possible values of measurements. But the two approaches speak about different kinds of measurement. This hinders comparing them to each other. Only projection measurements are common to both. Here, we sharpen the results of both approaches so that only projection measurements are used. This allows us to clarify the similarities and differences between the two approaches. Neither one dominates the other. 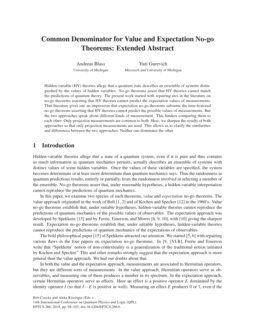 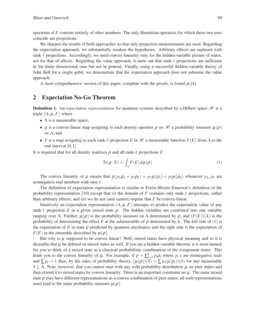 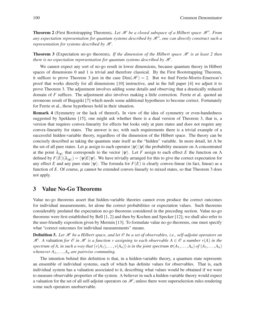 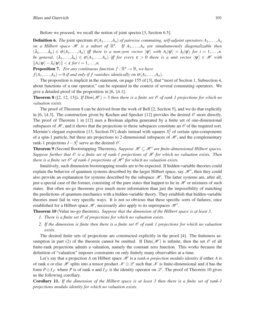 Hidden-variable theories allege that a state of a quantum system, even if it is pure and thus contains as much information as quantum mechanics permits, actually describes an ensemble of systems with distinct values of some hidden variables. Once the values of these variables are specified, the system becomes determinate or at least more determinate than quantum mechanics says. Thus the randomness in quantum predictions results, entirely or partially, from the randomness involved in selecting a member of the ensemble. No-go theorems assert that, under reasonable hypotheses, a hidden-variable interpretation cannot reproduce the predictions of quantum mechanics.

The bold philosophical paper [16] of Spekkens attracted our attention. We started [6, 7] with repairing various flaws in the four papers on expectation no-go theorems. In [10, §VI.B], Ferrie and Emerson write that “Spekkens’ notion of non-contextuality is a generalization of the traditional notion initiated by Kochen and Specker.” This and other remarks strongly suggest that the expectation approach is more general than the value approach. We had our doubts about that.

We sharpen the results of both approaches so that only projection measurements are used. Regarding the expectation approach, we substantially weaken the hypotheses. Arbitrary effects are replaced with rank-1 projections. Accordingly, we need convex-linearity only for the hidden-variable picture of states, not for that of effects. Regarding the value approach, it turns out that rank-1 projections are sufficient in the finite dimensional case but not in general. Finally, using a successful hidden-variable theory of John Bell for a single qubit, we demonstrate that the expectation approach does not subsume the value approach.

A more comprehensive version of this paper, complete with the proofs, is found at [5].

An expectation representation for quantum systems described by a Hilbert space H is a triple (Λ,μ,F) where

The definition of expectation representation is similar to Ferrie-Morris-Emerson’s definition of the probability representation [11] except that (i) the domain of F contains only rank-1 projections, rather than arbitrary effects, and (ii) we do not (and cannot) require that F be convex-linear.

But why is μ supposed to be convex linear? Well, mixed states have physical meaning and so it is desirable that μ be defined on mixed states as well. If you are a hidden-variable theorist, it is most natural for you to think of a mixed state as a classical probabilistic combination of the component states. This leads you to the convex linearity of μ. For example, if ρ=∑_i=1kp_iρ_i where p_i’s are nonnegative reals and ∑p_i=1

then, by the rules of probability theory,

. Note, however, that you cannot start with any wild probability distribution

If the dimension of the Hilbert space H is at least 2 then there is no expectation representation for quantum systems described by H.

We cannot expect any sort of no-go result in lower dimensions, because quantum theory in Hilbert spaces of dimensions 0 and 1 is trivial and therefore classical. By the First Bootstrapping Theorem, it suffices to prove Theorem 3 just in the case Dim(H)=2. But we find Ferrie-Morris-Emerson’s proof that works directly for all dimensions [11] instructive, and in the full paper [5] we adjust it to prove Theorem 3. The adjustment involves adding some details and observing that a drastically reduced domain of F suffices. The adjustment also involves making a little correction. Ferrie et al. quoted an erroneous result of Bugajski [8] which needs some additional hypotheses to become correct. Fortunately for Ferrie et al., those hypotheses hold in their situation.

Remark 4 (Symmetry or the lack of thereof).

In view of the idea of symmetry or even-handedness suggested by Spekkens [16], one might ask whether there is a dual version of Theorem 3, that is, a version that requires convex-linearity for effects but looks only at pure states and does not require any convex-linearity for states. The answer is no; with such requirements there is a trivial example of a successful hidden-variable theory, regardless of the dimension of the Hilbert space. The theory can be concisely described as taking the quantum state itself as the “hidden” variable. In more detail, let Λ be the set of all pure states. Let μ assign to each operator |ψ⟩⟨ψ| the probability measure on Λ concentrated at the point λ_|ψ⟩

that corresponds to the vector

|ψ⟩. Let F assign to each effect E the function on Λ defined by F(E)(λ_|ψ⟩)=⟨ψ|E|ψ⟩. We have trivially arranged for this to give the correct expectation for any effect E and any pure state |ψ⟩. The formula for F(E) is clearly convex-linear (in fact, linear) as a function of E. Of course, μ cannot be extended convex-linearly to mixed states, so that Theorem 3 does not apply.

The intention behind this definition is that, in a hidden-variable theory, a quantum state represents an ensemble of individual systems, each of which has definite values for observables. That is, each individual system has a valuation associated to it, describing what values would be obtained if we were to measure observable properties of the system. A believer in such a hidden-variable theory would expect a valuation for the set of all self-adjoint operators on H, unless there were superselection rules rendering some such operators unobservable.

Before we proceed, we recall the notion of joint spectra [4, Section 6.5].

The proposition is implicit in the statement, on page 155 of [4], that “most of Section 1, Subsection 4, about functions of a one operator,” can be repeated in the context of several commuting operators. We give a detailed proof of the proposition in [7, §4.1].

If Dim(H)=3 then there is a finite set O of rank 1 projections for which no valuation exists.

The proof of Theorem 8 can be derived from the work of Bell [3, Section 5], and we do that explicitly in [7, §4.3]. The construction given by Kochen and Specker [13] provides the desired O more directly. The proof of Theorem 1 in [13] uses a Boolean algebra generated by a finite set of one-dimensional subspaces of H, and it shows that the projections to those subspaces constitute an O of the required sort. Mermin’s elegant exposition [14, Section IV] deals instead with squares S_i2 of certain spin-components of a spin-1 particle, but these are projections to 2-dimensional subspaces of H, and the complementary rank-1 projections I−S_i2 serve as the desired O.

Intuitively, such dimension bootstrapping results are to be expected. If hidden-variable theories could explain the behavior of quantum systems described by the larger Hilbert space, say H′, then they could also provide an explanation for systems described by the subspace H. The latter systems are, after all, just a special case of the former, consisting of the pure states that happen to lie in H or mixtures of such states. But often no-go theorems give much more information than just the impossibility of matching the predictions of quantum-mechanics with a hidden-variable theory. They establish that hidden-variable theories must fail in very specific ways. It is not so obvious that these specific sorts of failures, once established for a Hilbert space H, necessarily also apply to its superspaces H′.

Suppose that the dimension of the Hilbert space is at least 3.

The desired finite sets of projections are constructed explicitly in the proof [5]. The finiteness assumption in part (2) of the theorem cannot be omitted. If Dim(H) is infinite, then the set O of all finite-rank projections admits a valuation, namely the constant zero function. This works because the definition of “valuation” imposes constraints on only finitely many observables at a time.

splits into a tensor product

K⊗L such that K is finite-dimensional and A has the form P⊗I_L where P is of rank n and I_L is the identity operator on L. The proof of Theorem 10 gives us the following corollary.

If the dimension of the Hilbert space is at least 3 then there is a finite set of rank-1 projections modulo identity for which no valuation exists.

Bell developed, in [2] and [3], a hidden-variable theory for a two-dimensional Hilbert space H. Here we summarize the improved version of Bell’s theory due to Mermin [14], we simplify part of Mermin’s argument, and we explain why the theory doesn’t contradict Theorem 3.

In the rest of this section, we work in the two-dimensional Hilbert space H. Let V be the set of value maps v for all the observables on H (so that v(A)

is an eigenvalue of an observable

A). In each pure state |ψ⟩, the hidden variables should determine a particular member of V.

A value representation for quantum systems described by H is a pair (Λ,V) where

Further, we require that, for any pure state |ψ⟩ and any observable A, the expectation ∫_ΛV_|ψ⟩λ(A)dλ of the eigenvalue of A agrees with the prediction ⟨ψ|A|ψ⟩ of quantum theory:

Definition 12 is narrowly tailored for our goals in this section; for a general definition of value representation see [7]

. Notice that, if a random variable (in our case, the eigenvalue of

A in ψ) takes only two values, then the expected value determines the probability distribution. A priori we should be speaking about commuting operators and joint spectra but things trivialize in the 2-dimensional case. Recall Proposition 7 and notice that, in the 2-dimensional Hilbert space, if operators A,B commute, then one of them is a polynomial function of the other.

There exists a value representation for the quantum systems described by the two-dimensional Hilbert space H.

A natural question arises why Bell’s theory doesn’t contradict Theorem 3? This is related to the convex linearity requirement. To obtain an expectation representation, we must extend the value representation, constructed in the proof of Theorem 13, to all density matrices in a convex linear way. But no such extension exists. In the full paper [5], we give a simple example illustrating what goes wrong if one attempts to extend the value representation in a convex linear way. Thus, Bell’s example of a hidden-variable theory for 2-dimensional H does not fit the assumptions in any of the expectation no-go theorems. It does not, therefore, clash with the fact that those theorems, unlike the value no-go theorems, apply in the 2-dimensional case.