In Fernandez-Fontelo et al (Statis. Med. 2016, DOI 10.1002/sim.7026) hidden integer-valued autoregressive (INAR) processes are used to estimate reporting probabilities for various diseases. In this comment it is demonstrated that the Poisson INAR(1) model with time-homogeneous underreporting can be expressed equivalently as a completely observed INAR(inf) model with a geometric lag structure. This implies that estimated reporting probabilities depend on the assumed lag structure of the latent process. 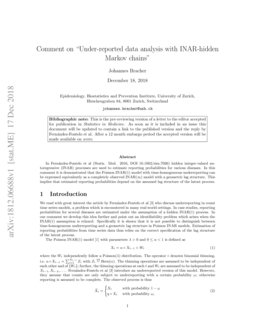 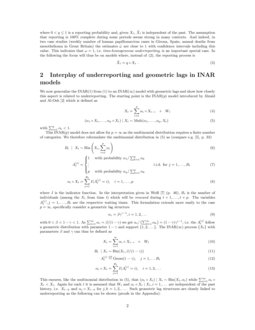 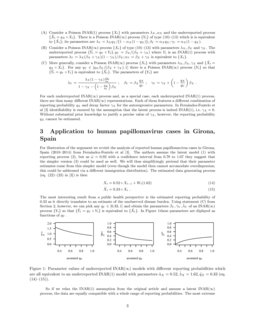 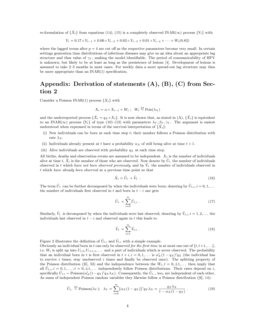 The generic identification problem is to decide whether a stochastic pro...
Alexander Schönhuth, et al. ∙

Estimating the real burden of disease under a pandemic situation: The SARS-CoV2 case

We read with great interest the article by Fernández-Fontelo et al [3] who discuss underreporting in count time series models, a problem which is encountered in many real-world settings. In case studies, reporting probabilities for several diseases are estimated under the assumption of a hidden INAR(1) process. In our comment we develop this idea further and point out an identifiability problem which arises when the INAR(1) assumption is relaxed. Specifically it is shown that it is not possible to distinguish between time-homogeneous underreporting and a geometric lag structure in Poisson INAR models. Estimation of reporting probabilities from time series data thus relies on the correct specification of the lag structure of the latent process.

where the Wt independently follow a Poisson(λ) distribution. The operator ∘ denotes binomial thinning, i.e. α∘Xt−1=∑Xt−1i=1Zi with Ziiid∼Bern(α). The thinning operations are assumed to be independent of each other and of {Wt}; further, the thinning operations at each t and Wt are assumed to be independent of Xt−1,Xt−2,…. Fernández-Fontelo et al [3] introduce an underreported version of this model. However, they assume that counts are only subject to underreporting with a certain probability ω; otherwise reporting is assumed to be complete. The observed process is thus

where 0<q≤1 is a reporting probability and, given Xt, ~Xt is independent of the past. The assumption that reporting is 100% complete during some periods seems strong in many contexts. And indeed, in two case studies (weekly number of human papillomavirus cases in Girona, Spain; annual deaths from mesothelioma in Great Britain) the estimates ^ω

are close to 1 with confidence intervals including this value. This indicates that

ω=1, i.e. time-homogeneous underreporting, is an important special case. In the following the focus will thus be on models where, instead of (2), the reporting process is

2 Interplay of underreporting and geometric lags in INAR models

We now generalize the INAR(1) from (1) to an INAR(∞) model with geometric lags and show how closely this aspect is related to underreporting. The starting point is the INAR(p) model introduced by Alzaid and Al-Osh [2] which is defined as

where I is the indicator function. In the interpretation given in Weiß [7] (p. 46), Bt is the number of individuals (among the Xt from time t) which will be renewed during t+1,…,t+p. The variables A(j)t,j=1,…,Bt are the respective waiting times. This formulation extends more easily to the case p=∞, specifically consider a geometric lag structure

This ensures, like the multinomial distribution in (5), that (αi∘Xt)∣Xt∼Bin(Xt,αi) while ∑∞i=1αi∘Xt<Xt. Again for each t it is assumed that Wt and αi∘Xt∣Xt,i=1,… are independent of the past history, i.e. Xt−k and αj∘Xt−k for j,k=1,2,…. Such geometric lag structures are closely linked to underreporting as the following can be shown (proofs in the Appendix):

For each underreported INAR(∞) process and, as a special case, each underreported INAR(1) process, there are thus many different INAR(∞) representations. Each of them features a different combination of reporting probability qX and decay factor γX for the autoregressive parameters. In Fernández-Fontelo et al [3] identifiability is ensured by the assumption that the latent process is indeed INAR(1), i.e. γX=0. Without substantial prior knowledge to justify a precise value of γX, however, the reporting probability qX cannot be estimated.

For illustration of the argument we revisit the analysis of reported human papillomavirus cases in Girona, Spain (2010–2014) from Fernández-Fontelo et al [3]. The authors assume the latent model (1) with reporting process (2), but as ^ω=0.92 with a confidence interval from 0.78 to 1.07 they suggest that the simpler version (3) could be used as well. We will thus simplifyingly pretend that their parameter estimates come from this simpler model (even though the model then cannot accomodate overdispersion; this could be addressed via a different immigration distribution). The estimated data generating process (eq. (22)–(23) in [3]) is then

The most interesting result from a public health perspective is the estimated reporting probability of 0.33 as it directly translates to an estimate of the unobserved disease burden. Using statement (C) from Section 2, however, we can pick any qY∈[0.33,1] and obtain the parameters ^βY,^γY,^λY of an INAR(∞) process {Yt} so that {~Yt=qY∘Yt} is equivalent to {~Xt}. In Figure 1these parameters are diplayed as functions of qY.

So if we relax the INAR(1) assumption from the original article and assume a latent INAR(∞) process, the data are equally compatible with a whole range of reporting probabilities. The most extreme re-formulation of {~Xt} from equations (14), (15) is a completely observed INAR(∞) process {Yt} with

where the lagged terms after p=4 are cut off as the respective parameters become very small. In certain settings generation time distributions of infectious diseases may give us an idea about an appropriate lag structure and thus value of γY, making the model identifiable. The period of communicability of HPV is unknown, but likely to be at least as long as the persistence of lesions [4]. Development of lesions is assumed to take 2–3 months in most cases. For weekly data a more spread-out lag structure may thus be more appropriate than an INAR(1) specification.

and the underreported process {~Xt=qX∘Xt}. It is now shown that, as stated in (A), {~Xt} is equivalent to an INAR(∞) process {Yt} of type (10)–(13) with parameters λY,βY,γY. The argument is easiest understood when expressed in terms of the survival interpretation of {~Xt}:

The term ~Ut⋅ can be further decomposed by when the individuals were born; denoting by ~Ut,i,i=0,1,… the number of individuals first observed in t and born in t−i one gets

Figure 2 illustrates the definition of ~Ut,i and ~Vt,i with a simple example.

Obviously an individual born in t can only be observed for the first time in at most one out of {t,t+1,…}, i.e. Wt is split up into Ut,0,Ut+1,1,… and a part of individuals which is never observed. The probability that an individual born in t is first observed in t+i,i=0,1,… is αiX(1−qX)iqX (the individual has to survive i times, stay unobserved i times and finally be observed once). The splitting property of the Poisson distribution ([6], 53) and the independence between the Wt,t=0,±1,… then imply that all ~Ut,i,i=0,1,…;t=0,±1,… independently follow Poisson distributions. Their rates depend on i, specifically ~Ut,i∼Poisson(αiX(1−qX)iqXλX). Consequently, the ~Ut,⋅

, too, are independent of each other. As sums of independent Poisson random variables they likewise follow a Poisson distribution (

Statement (C) follows from statements (A) and (B) in the following way. Consider an INAR(∞) process {Xt} and {~Xt=qX∘Xt}. Using (B) an INAR(1) process {Zt} with parameters λZ=λX(βX+γX)(1−γX)/βX,αZ=βX+γX can be constructed so that {~Zt=qZ∘Zt};qZ=βX/(βX+γX) is equivalent to {Xt}. Thus {~Xt} is in turn equivalent to {Z∗=(qZqX)∘Zt}. One can now choose any qY∈[qXqZ,1] and define {Yt=(qXqZ/qY)∘Zt},{~Yt=qY∘Yt}. The process {~Yt} is then obviously equivalent to {Z∗t} and thus {~Xt}. The proof is complete as statement (A) implies that {Yt} has a representation as an INAR(∞) process with parameters

The author would like to thank Leonhard Held, Małgorzata Roos and Christian H. Weiß for helpful comments.