A quick proof of Gallai's celebrated theorem on color-critical graphs is given from Gallai's simple, ingenious lemma on factor-critical graphs, in terms of partitioning the vertex-set into a minimum number of hyperedges of a hereditary hypergraph, generalizing the chromatic number. We then show examples of applying the results to new problems and indicate the way to algorithms and refined complexity results for all these examples at the same time. 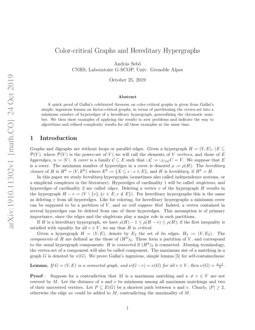 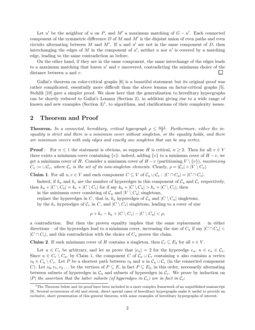 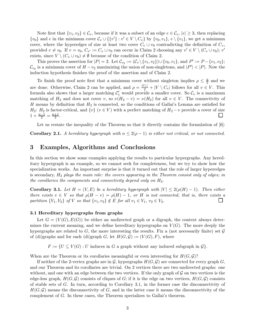 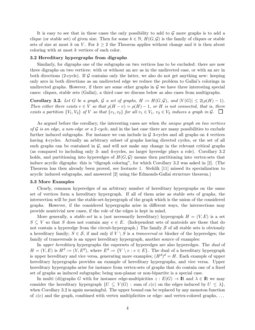 Graphs and digraphs are without loops or parallel edges. Given a hypergraph H=(V,E), (E⊆P(V), where P(V) is the power-set of V) we will call the elements of V vertices, and those of E hyperedges, n:=|V|. A cover is a family C⊆E such that ∪C:=∪C∈CC=V. We suppose that E is a cover. The minimum number of hyperedges in a cover is denoted ρ:=ρ(H). The hereditary closure of H is Hh=(V,Eh) where Eh:={X⊆e:e∈E}, and H is hereditary, if Hh=H.

If H is a hereditary hypergraph, we have ρ(H)−1≤ρ(H−v)≤ρ(H); if the first inequality is satisfied with equality for all v∈V, we say that H is critical.

Given a hypergraph H=(V,E), denote by E2 the set of its edges, H2:=(V,E2). The components of H are defined as the those of (Hh)2. These form a partition of V, and correspond to the usual hypergraph components: H is connected if (Hh)2 is connected. Abusing terminology, the vertex-set of a component will also be called component. The maximum size of a matching in a graph G is denoted by ν(G). We prove Gallai’s ingenious, simple lemma [5] for self-containedness:

Proof : Suppose for a contradiction that M is a maximum matching and u≠v∈V are not covered by M. Let the distance of u and v be minimum among all maximum matchings and two of their uncovered vertices. Let P⊆E(G) be a shortest path between u and v. Clearly, |P|≥2, otherwise the edge uv could be added to M, contradicting the maximality of M.

Let u′ be the neighbor of u on P, and M′ a maximum matching of G−u′. Each connected component of the symmetric difference D of M and M′ is the disjoint union of even paths and even circuits alternating between M and M′. If u and u′ are not in the same component of D, then interchanging the edges of M in the component of u′, neither u nor u′ is covered by a matching edge, leading to the same contradiction as before.

On the other hand, if they are in the same component, the same interchange of the edges leads to a maximum matching that leaves u′ and v uncovered, contradicting the minimum choice of the distance between u and v.

Gallai’s theorem on color-critical graphs [6] is a beautiful statement but its original proof was rather complicated, essentially more difficult than the above lemma on factor-critical graphs [5]. Stehlík [10] gave a simpler proof. We show here that the generalization to hereditary hypergraphs can be shortly reduced to Gallai’s Lemma (Section 2), in addition giving rise to a wide range of known and new examples (Section 3)111The Theorem below and its proof have been included in a more complex framework of an unpublished manuscript [9]. Several occurrences of old and recent, direct special cases of hereditary hypergraphs make it useful to provide an exclusive, short presentation of this general theorem, with some examples of hereditary hypergraphs of interest., to algorithms, and clarifications of their complexity issues.

In a connected, hereditary, critical hypergraph ρ≤n+12. Furthermore, either the inequality is strict and there is a minimum cover without singleton, or the equality holds, and there are minimum covers with only edges and exactly one singleton that can be any vertex.

Indeed, if ku and kv are the number of hyperedges in this component of Cu and Cv respectively, then ku+|C∖Cu|=kv+|C∖Cv| for if say ku+|C∖Cu|>kv+|C∖Cv|, then

in the minimum cover consisting of Cu and |V∖Cu| singletons,

by the kv hyperedges of Cv in C, and |C∖Cv| singletons, leading to a cover of size

a contradiction. But then the proven equality implies that the same replacement – in either directions – of the hyperedges lead to a minimum cover, increasing the size of Cu if say |C∩Cu|<|C∩Cv|, and this contradiction with the choice of Cu proves the claim.

Claim 2. If each minimum cover of H contains a singleton, then Cv⊆E2 for all v∈V.

To finish the proof note first that a minimum cover without singleton implies ρ≤n2 and we are done. Otherwise, Claim 2 can be applied, and ρ=|Cv|2+|V∖Cv| follows for all v∈V. This formula also shows that a larger matching C′v would provide a smaller cover. So Cv is a maximum matching of H2 and does not cover v, so ν(H2−v)=ν(H2) for all v∈V. The connectivity of H means by definition that H2 is connected, so the conditions of Gallai’s Lemma are satisfied for H2: H2 is factor-critical, and {v} (v∈V) with a perfect matching of H2−v provide a cover of size 1+n−12=n+12.

Let us restate the inequality of the Theorem so that it directly contains the formulation of [6]:

A hereditary hypergraph with n≤2(ρ−1) is either not critical, or not connected.

In this section we show some examples applying the results to particular hypergraphs. Any hereditary hypergraph is an example, so we cannot seek for completeness, but we try to show how the specialization works. An important surprise is that it turned out that the role of larger hyperedges is secondary, H2 plays the main role: the covers appearing in the Theorem consist only of edges; in the corollaries the components and connectivity depend only on H2.

Let G=(V(G),E(G)) be either an undirected graph or a digraph, the context always determines the current meaning, and we define hereditary hypergraphs on V(G). The more deeply the hypergraphs are related to G, the more interesting the results. Fix a (not necessarily finite) set G of (di)graphs and for each (di)graph G, let H(G,G):=(V(G),F), where

When are the Theorem or its corollaries meaningful or even interesting for H(G,G)?

It is easy to see that in these cases the only possibility to add to G more graphs is to add a clique (or stable set) of given size. Then for some k∈N, H(G,G) is the family of cliques or stable sets of size at most k on V. For k≥2 the Theorem applies without change and it is then about coloring with at most k vertices of each color.

Similarly, for digraphs one of the subgraphs on two vertices has to be excluded: there are now three digraphs on two vertices: with or without an arc as in the undirected case, or with an arc in both directions (2-cycle). If G contains only the latter, we also do not get anything new: keeping only arcs in both directions as an undirected edge we reduce the problem to Gallai’s colorings in undirected graphs. However, if there are some other graphs in G we have three interesting special cases: cliques, stable sets (Gallai), a third case we discuss below as also cases from multigraphs.

As argued before the corollary, the interesting cases are when the unique graph on two vertices of G is an edge, a non-edge or a 2-cycle, and in the last case there are many possibilities to exclude further induced subgraphs. For instance we can include in G 3-cycles and all graphs on 4 vertices having 4-cycles. Actually an arbitrary subset of graphs having directed cycles, or the set of all such graphs can be contained in G, and will not make any change in the relevant critical graphs (as compared to including only 3- and 4-cycles, no larger hyeredge plays a role). Corollary 3.2 holds, and partitioning into hyperedges of H(G,G) means then partitioning into vertex-sets that induce acyclic digraphs: this is “digraph coloring”, for which Corollary 3.2 was asked in [2]. (The Theorem has then already been proved, see footnote 1. Stehlík [11] missed its specialization to acyclic induced subgraphs, and answered [2] using the Edmonds-Gallai structure theorem.)

Clearly, common hyperedges of an arbitrary number of hereditary hypergraphs on the same set of vertices form a hereditary hypergraph. If all of them arise as stable sets of graphs, the intersection will be just the stable-set-hypergraph of the graph which is the union of the considered graphs. However, if the considered hypergraphs arise in different ways, the intersections may provide nontrivial new cases, if the role of the edges is kept in mind.

More generally, a stable-set in a (not necessarily hereditary) hypergraph H=(V,E) is a set S⊆V so that S does not contain any e∈E. (Independent sets of matroids are those that do not contain a hyperedge from the circuit-hypergraph.) The family S of all stable sets is obviously a hereditary family; S∈S, if and only if V∖S is a transversal or blocker of the hyperedges; the family of transversals is an upper hereditary hypergraph, another source of examples:

In multi (di)graphs G with for instance edge-multipicities z:E(G)→IR and λ∈IR we may consider the hereditary hypergraph {U⊆V(G):sum of z(e) on the edges induced by U≤λ}, when Corollary 3.2 is again meaningful. The upper bound can be replaced by any monoton function of z(e) and the graph, combined with vertex multiplicities or edge- and vertex-colored graphs, …

The focus of the examples of the previous subsections was the Theorem. Algorithmic and complexity questions are less “choosy” and become meaningful and nontrivial for more examples.

Once in a while questions about particular, critical hereditary hypergraphs are raised anew, sometimes as open problems like in [2] about partitioning the vertex-set into acyclic digraphs. How can the NP-hard covering participate in well-characterizing minmax theorems? The discussion of this question is beyond the possibilities of this note. This will be layed out in forthcoming papers, we mention the key to the solution only shortly:

However, the maximum μ of the number of vertices covered by non-singletons in a cover of a hereditary hypergraph can be maximized in polynomial time, and the vertex-weighted generalization can also be solved! It can be seen that this maximum does not change if we write here “minimum cover” instead of “cover”. This allows to handle with well characterizing minmax theorems and in polynomial time some aspects of minimum covers [8], for which results of Bouchet [1], Cornuéjols, Hartvigsen and Pulleyblank [3], [4] play an enlightening role.

We tried to show by the Theorem and multiple examples how results on graph colorings may be extended to covers in hypergraphs. We continue this work with minmax and structure theorems, develop algorithms at the general level of hereditary hypergraphs, and show more applications and connections between various problems [8], [9]. We hope the reader will also have the reflex of using hereditary hypergraphs when a new special case is coming up!