Emergent patterns of collective attention towards scientists and their research may function as a proxy for scientific impact which traditionally is assessed via committees that award prizes to scientists. Therefore it is crucial to understand the relationships between scientific impact and online demand and supply for information about scientists and their work. In this paper, we compare the temporal pattern of information supply (article creations) and information demand (article views) on Wikipedia for two groups of scientists: scientists who received one of the most prestigious awards in their field and influential scientists from the same field who did not receive an award. Our research highlights that awards function as external shocks which increase supply and demand for information about scientists, but hardly affect information supply and demand for their research topics. Further, we find interesting differences in the temporal ordering of information supply between the two groups: (i) award-winners have a higher probability that interest in them precedes interest in their work; (ii) for award winners interest in articles about them and their work is temporally more clustered than for non-awarded scientists. 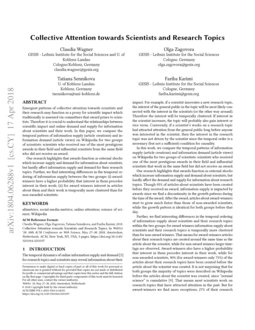 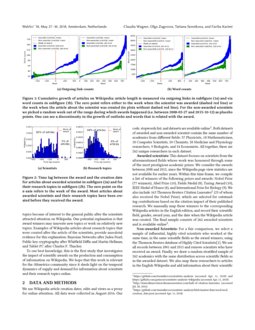 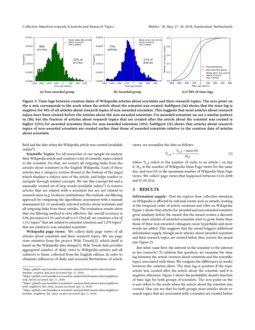 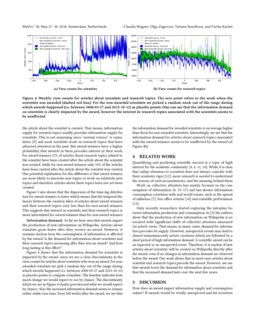 'Getting out of the closet': Scientific authorship of literary fiction and knowledge transfer

What is the relationship between aging and the character of scientific a...
Haochuan Cui, et al. ∙

It is important to explore how scientists decide their research agenda a...
Xiaoyao Yu, et al. ∙

We quantify the long term impact that the coauthorship with established ...
Weihua Li, et al. ∙

The alignment of public research supply and industry demand for effective technology transfer: the case of Italy

We investigate whether and in what measure scientists tend to diversify ...
Giovanni Abramo, et al. ∙

In this work, we compare the temporal patterns of information supply (article creations) and information demand (article views) on Wikipedia for two groups of scientists: scientists who received one of the most prestigious awards in their field and influential scientists that work in the same field but did not receive an award.

Our research highlights that awards function as external shocks which increase information supply and demand about scientists, but hardly affect the demand and supply for information about research topics. Though 95% of articles about scientists have been created before they received an award, information supply is impacted by awards since we find a discontinuity in the growth patterns during the time of the award. After the award, articles about award-winners start to grow much faster than those of non-awarded scientists, while the growth pattern is identical for both groups before that day.

. That means most scientists work on research topics that have attracted attention in the past. But for award-winners we find more exceptions; 27% of their research topics become of interest to the general public after the scientists attracted attention on Wikipedia. One potential explanation is that award winners may innovate new topics or work on relatively new topics. Examples of Wikipedia articles about research topics that were created after the article of the scientists, provide anecdotal evidence for this explanation: Bayesian Networks after Judea Pearl, Public key cryptography after Whitfield Diffie and Martin Hellman, and Tablet PC after Charles P. Thacker.

To our best knowledge, this is the first study that investigates the impact of scientific awards on the production and consumption of information on Wikipedia. We hope that this work is relevant for the Altmetrics community since it sheds light on the temporal dynamics of supply and demand for information about scientists and their research topics online.

We use Wikipedia article creation dates, edits and views as a proxy for online attention. All data were collected in August 2016. Our code, stopwords list, and datasets are available online111https://github.com/tsennikova/scientists-analysis (accessed Apr. 11, 2018) and https://github.com/gesiscss/scientists-analysis-wikipedia (accessed Apr. 11, 2018) . Both datasets of awarded and non-awarded scientist contain the same number of academics from different fields: 57 Physicists, 18 Mathematicians, 18 Computer Scientists, 50 Chemists, 58 Medicine and Physiology researchers, 9 Biologists, and 54 Economists. All together, there are 262 unique researchers in each dataset.

Awarded scientists: This dataset focuses on scientists from the aforementioned fields whose work was honoured through some of the most prestigious academic prizes. We consider the awards between 2008 and 2015, since the Wikipedia page view statistics are not available for earlier years. Within this time frame, we compile a list of winners of the following prizes and awards: Nobel Prize (77 winners), Abel Prize (10), Fields Medal (8), Turing Award (10), IEEE Medal of Honor (8), and International Prize for Biology (9). We also include 163 Thomson Reuters Citation Laureates222http://stateofinnovation.thomsonreuters.com/hall-of-citation-laureates (accessed Jul. 28, 2016) (23 of whom also received the Nobel Prize), which are selected for outstanding contributions based on the citation impact of their published research. We manually map these winners to the corresponding Wikipedia articles in the English edition, and record their scientific field, gender, award year, and the date when the Wikipedia article was created. The final sample consists of 262 awarded scientists and is available online333https://github.com/tsennikova/scientists-analysis/blob/master/data/seed/seed_creation_date.json (accessed Apr. 11, 2018).

Non-awarded Scientists: For a fair comparison, we select a sample of influential, highly cited scientists who worked at the same time, in the same scientific fields as the award winners, using the Thomson Reuters database of Highly Cited Scientists(reu, 2016). We use all records between 2001 and 2015 and remove scientists who have received an award. Finally, we draw a random stratified sample of 262 academics with the same distribution across scientific fields as in the awarded dataset. We also map these researchers to articles in the English Wikipedia and add information about their scientific field and the date when the Wikipedia article was created (available online444https://github.com/tsennikova/scientists-analysis/blob/master/data/baseline/baseline_creation_date.json (accessed Apr. 11, 2018)).

Scientific Topics: For all researcher in our sample we analyze their Wikipedia article and construct a list of scientific topics related to the scientist. For that, we extract all outgoing links from the articles about scientists in the English Wikipedia. Each of these articles has a category section (found at the bottom of the page) which displays a subject area of the article, and helps readers to navigate through related concepts. We use this concept list and a manually created set of stop words (available online555https://github.com/tsennikova/scientists-analysis/blob/master/data/neighbors/stop_list.txt (accessed Apr. 11, 2018)) to remove articles that are related with a scientists but are not related to research areas (e.g. locations, institutions). We evaluate our filtering approach by comparing the algorithmic assessment with a manual assessment for 10 randomly selected articles about scientists and all outgoing links from these articles. The evaluation results show that our filtering method is very effective: the overall accuracy is 0.96, precision is 0.93, and recall is 0.9. Overall, we construct a list of 1,911 topics666https://github.com/tsennikova/scientists-analysis/blob/master/data/neighbors/seed_neighbors_list_clean_en.json (accessed Apr. 11, 2018) that are related to awarded scientists and 1,070 topics777https://github.com/tsennikova/scientists-analysis/blob/master/data/neighbors/baseline_neighbors_list_clean_en.json (accessed Apr. 11, 2018) that are related to non-awarded scientists.

Wikipedia page views: We collect daily page views of all articles about scientists and their research topics. We use page view statistics from the project Wiki Trends(wik, 2016a), which itself is based on the Wikimedia data dumps(wik, 2016b). Wiki Trends data provides aggregated number of daily visits to Wikipedia articles and all redirects to them, collected from the English edition. In order to eliminate influences of daily and seasonal fluctuations of article views, we normalize the data as follows:

Information supply: First we explore how collective attention on Wikipedia is affected by external events such as awards, looking at the temporal order of article creations and edits on Wikipedia. Figure 1 shows that articles for awarded and non-awarded scientists grow similarly before the award. But the award creates a discontinuity since articles of awarded scientists start to grow faster than those of their non-awarded colleagues; more hyperlinks and more words are added. This suggests that the award triggers additional information supply, though most articles about awarded scientists and their research topics are created before they receive the award (see Figure 2).

shows the probability density function of time lags for both groups of scientists. The zero point on the x-axis refers to the week when the article about the scientist was created. One can see that for both groups most articles about research topics that are associated with a scientist are created before the article about the scientist is created. That means, information supply for research topics usually precedes information supply for scientists. This is not surprising since “normal science” is cumulative

Information demand: So far we have seen that awards impact the production of new information on Wikipedia. Articles about scientists grow faster after they receive an award. However, it remains unclear how the consumption of information is affected by the award. Is the demand for information about scientists and their research topics increasing after they win an award? And how long-lasting is this effect?

Quantifying and predicting scientific success is a topic of high interest for the academic community (Sinatra et al., 2016; Penner et al., 2013; Fortunato et al., 2018; Bar-Ilan et al., 2012). While it is clear that online attention to scientists does not always coincide with their academic rigor (Samoilenko and Yasseri, 2014), more research is needed to understand the reasons of such inconsistencies, and the meaning behind them.

Only recently researchers started exploring the interplay between information production and consumption. In (Ciampaglia et al., 2015) the authors show that the production of new information on Wikipedia is associated with significant shifts of collective attention measured via article views. That means, in many cases, demand for information precedes its supply. However, unexpected events may lead to almost instantaneously article creations which are followed by a short period of high information demand. A scientific award can be an expected or an unexpected event. Therefore, it is unclear if new articles about scientists will be created on Wikipedia directly after the award, even if no changes in information demand are observed before the award. Our work shows that in most cases articles about scientist and research topics precede the award. However, we see that awards boost the demand for information about scientists and that the increased demand lasts over the next few years.

The discontinuity which we see during the week when the prizes are awarded suggests that awards may have a causal effect on information production and consumption. However, to establish a hard causal link future research is necessary since other factors that correlate with awards may exist and confound our analysis.

We also find interesting differences between the two groups of scientists when looking at the information production side. For award-winners articles about them and their research topics are temporally more clustered than for non-award winners. Award-winners also have a higher probability that interest in them precedes interest in their work. One potential explanation is that award winners are more connected with their research topic since they may innovate new topics or work on relatively new topics. Examples of topic articles that were created after the article of the scientist provide anecdotal evidence for this explanation: Bayesian Networks after Judea Pearl, Public key cryptography after Whitfield Diffie and Martin Hellman, and Tablet PC after Charles P. Thacker. However, further research is necessary to explore the different types of relationships between scientists and their research topics that will lead to the creation of a hyperlink on Wikipedia.

The goal of this work was to understand the impact of awards on the production and consumption of information about scientists and their research topics on Wikipedia.

For future work it would be interesting to extend this group level analysis with an individual level analysis and further investigate the different types of relationships between scientists and their research topics that may lead to a hyperlink on Wikipedia. We also collected gender information about scientists and plan to compare the information supply and demand for female and male award-winners and influential scientists that did not receive an award in future work.

This work is part of the DFG-funded research project *metrics (project number: 314727790). Further information on the project can be found at https://metrics-project.net.