Reducing the latency variance in machine learning inference is a key requirement in many applications. Variance is harder to control in a cloud deployment in the presence of stragglers. In spite of this challenge, inference is increasingly being done in the cloud, due to the advent of affordable machine learning as a service (MLaaS) platforms. Existing approaches to reduce variance rely on replication which is expensive and partially negates the affordability of MLaaS. In this work, we argue that MLaaS platforms also provide unique opportunities to cut the cost of redundancy. In MLaaS platforms, multiple inference requests are concurrently received by a load balancer which can then create a more cost-efficient redundancy coding across a larger collection of images. We propose a novel convolutional neural network model, Collage-CNN, to provide a low-cost redundancy framework. A Collage-CNN model takes a collage formed by combining multiple images and performs multi-image classification in one shot, albeit at slightly lower accuracy. We then augment a collection of traditional single image classifiers with a single Collage-CNN classifier which acts as a low-cost redundant backup. Collage-CNN then provides backup classification results if a single image classification straggles. Deploying the Collage-CNN models in the cloud, we demonstrate that the 99th percentile tail latency of inference can be reduced by 1.47X compared to replication based approaches while providing high accuracy. Also, variation in inference latency can be reduced by 9X with a slight increase in average inference latency. 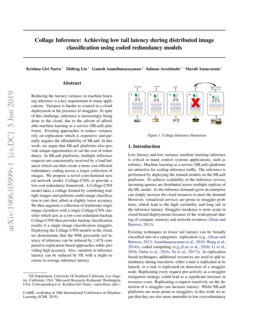 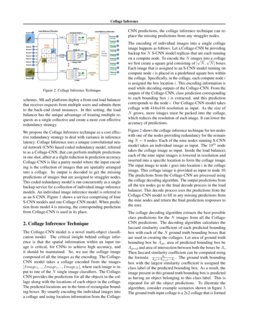 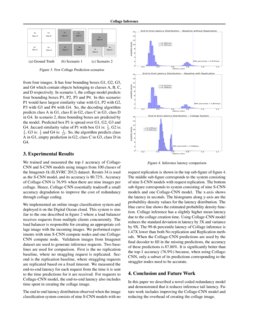 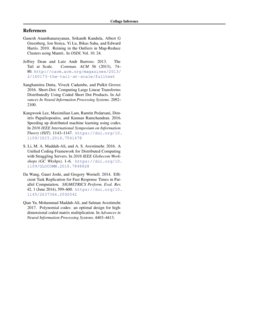 Low latency and low variance machine learning inference is critical in many control systems applications, such as robotics. Machine learning as a service (MLaaS) platforms are attractive for scaling inference traffic. The inference is performed by deploying the trained models on the MLaaS platforms. To achieve scalability of the inference service, incoming queries are distributed across multiple replicas of the ML model. As the inference demands grow an enterprise can simply increase the cloud instances to meet the demand. However, virtualized services are prone to straggler problems, which lead to the high variability and long tail in the inference latency. Straggler incidence is more acute in cloud-based deployments because of the widespread sharing of compute, memory and network resources (Dean and Barroso, 2013).

Existing techniques to lower tail latency can be broadly classified into two categories: replication (e.g., (Dean and Barroso, 2013; Ananthanarayanan et al., 2010; Wang et al., 2014)), coded computing (e.g.,(Lee et al., 2016; Li et al., 2016; Dutta et al., 2016; Yu et al., 2017)). In replication based techniques, additional resources are used to add redundancy during execution: either a task is replicated at its launch, or a task is replicated on detection of a straggler node. Replicating every request pro-actively as a straggler mitigation strategy could lead to a significant increase in resource costs. Replicating a request reactively on the detection of a straggler can increase latency. While MLaaS platforms are more prone to stragglers, in this work we argue that they are also more amenable to low cost redundancy schemes. MLaaS platforms deploy a front-end load balancer that receives requests from multiple users and submits them to the back-end cloud instances. In this setting, the load balancer has the unique advantage of treating multiple requests as a single collective and create a more cost effective redundancy strategy.

We propose the Collage Inference technique as a cost effective redundancy strategy to deal with variance in inference latency. Collage Inference uses a unique convolutional neural network (CNN) based coded redundancy model, referred to as a Collage-CNN, that can perform multiple predictions in one shot, albeit at a slight reduction in prediction accuracy. Collage-CNN is like a parity model where the input encoding is the collection of images that are spatially arranged into a collage. Its output is decoded to get the missing predictions of images that are assigned to straggler nodes. This coded redundancy model is run concurrently as a single backup service for a collection of individual image inference models. An individual image inference model is referred to as an S-CNN. Figure 1 shows a service comprising of four S-CNN models and one Collage-CNN model. When prediction from model 4 is missing, the corresponding prediction from Collage-CNN is used in its place.

The Collage-CNN model is a novel multi-object classification model. The critical insight behind collage inference is that the spatial information within an input image is critical, for CNNs to achieve high accuracy, and it should be maintained. So, we use the collage image composed of all the images as the encoding. The Collage-CNN model takes a collage encoded from the images [Image1,..,Imagei,..,ImageN], where each image is input to one of the N single image classifiers. The Collage-CNN provides the predictions for all the objects in the collage along with the locations of each object in the collage. The predicted locations are in the form of rectangular bounding boxes. By smartly encoding the individual images into a collage and using location information from the Collage-CNN predictions, the collage inference technique can replace the missing predictions from any straggler nodes.

The encoding of individual images into a single collage image happens as follows. Let a Collage-CNN be providing backup for N S-CNN model replicas that are each running on a compute node. To encode the N images into a collage we first create a square grid consisting of [√N,√N] boxes. Each image that is assigned to an S-CNN model running on compute node i is placed in a predefined square box within the collage. Specifically, in the collage, each compute node i is assigned the box location i. This encoding information is used while decoding outputs of the Collage-CNN. From the outputs of the Collage-CNN, class prediction corresponding to each bounding box i is extracted, and this prediction corresponds to the node i. Our Collage-CNN model takes collage with 416x416 resolution as input. As the size of N grows, more images must be packed into the collage, which reduces the resolution of each image. It can lower the accuracy of predictions.

We implemented an online image classification system and deployed it on the Digital Ocean cloud. This system is similar to the one described in figure 2 where a load balancer receives requests from multiple clients concurrently. The load balancer is responsible for creating an appropriate collage image with the incoming images. We performed experiments with nine S-CNN compute nodes and one Collage-CNN compute node. Validation images from Imagenet dataset are used to generate inference requests. Two baselines are used for comparison. First is the no replication baseline, where no straggling request is replicated. Second is the replication baseline, where straggling requests are replicated based on a fixed timeout. We measured the end-to-end latency for each request from the time it is sent to the time predictions for it are received. For requests to Collage-CNN model, the end-to-end latency also includes time spent in creating the collage image.

. The middle sub-figure corresponds to the system consisting of nine S-CNN models with request replication. The bottom sub-figure corresponds to system consisting of nine S-CNN models and one Collage-CNN model. The x-axis shows the latency in seconds. The histograms along y-axis are the probability density values for the latency distribution. The blue curve line shows the estimated probability density function. Collage inference has a slightly higher mean latency due to the collage creation time. Using Collage-CNN model reduces the standard deviation in latency by 3X and variance by 9X. The 99-th percentile latency of Collage inference is 1.47X lower than both No replication and Replication methods. When the Collage-CNN predictions are used by the final decoder to fill in the missing predictions, the accuracy of these predictions is 87.86%. It is significantly better than the top-1 accuracy (76.9%) because, when using Collage-CNN, only a subset of its predictions corresponding to the straggler nodes need to be accurate.

In this paper we described a novel coded redundancy model and demonstrated that it reduces inference tail latency. Future work includes improving the Collage-CNN model and reducing the overhead of creating the collage image.