Recommender systems (RS), which have been an essential part in a wide range of applications, can be formulated as a matrix completion (MC) problem. To boost the performance of MC, matrix completion with side information, called inductive matrix completion (IMC), was further proposed. In real applications, the factorized version of IMC is more favored due to its efficiency of optimization and implementation. Regarding the factorized version, traditional IMC method can be interpreted as learning an individual representation for each feature, which is independent from each other. Moreover, representations for the same features are shared across all users/items. However, the independent characteristic for features and shared characteristic for the same features across all users/items may limit the expressiveness of the model. The limitation also exists in variants of IMC, such as deep learning based IMC models. To break the limitation, we generalize recent advances of self-attention mechanism to IMC and propose a context-aware model called collaborative self-attention (CSA), which can jointly learn context-aware representations for features and perform inductive matrix completion process. Extensive experiments on three large-scale datasets from real RS applications demonstrate effectiveness of CSA. 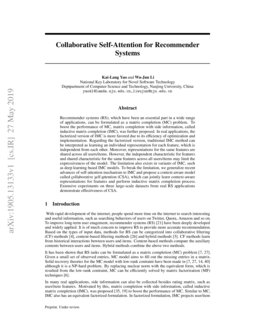 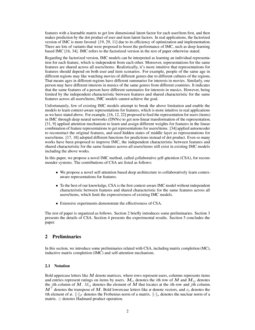 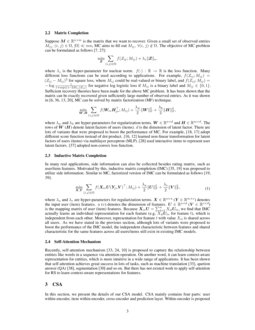 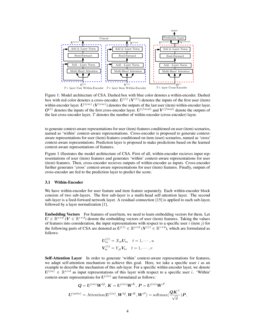 With rapid development of the internet, people spend more time on the internet to search interesting and useful information, such as searching behaviors of users on Twitter, Quora, Amazon and so on. To improve long-term user enagement, recommender systems (RS) Koren et al. (2009) have been deeply developed and widely applied. It is of much concern to improve RS to provide more accurate recommendation. Based on the types of input data, methods for RS can be categorized into collaborative filtering (CF) methods Breese et al. (1998), content-based filtering methods Pazzani and Billsus (2007) and hybrid methods Burke (2002). CF methods learn from historical interactions bewteen users and items. Content-based methods compare the auxiliary contents between users and items. Hybrid methods combine the above two methods.

It has been shown that RS tasks can be formulated as a matrix completion (MC) problem Candès and Recht (2009); Recht (2011). Given a small set of observed entries, MC model aims to fill out the missing entries in a matrix. Solid recovery theories for the MC model with low-rank contraint have been made in Candès and Recht (2009); Recht (2011); Ge et al. (2017); Zhu et al. (2018) although it is a NP-hard problem. By replacing nuclear norm with the equivalent form, which is resulted from the low-rank contraint, MC can be efficiently solved by matrix factorization (MF) techniques Cabral et al. (2013).

In many real applications, side information can also be collected besides rating matrix, such as user/item features. Motivated by this, matrix completion with side information, called inductive matrix completion (IMC), was proposed Xu et al. (2013); Jain and Dhillon (2013) to boost the performance of MC. Similar to MC, IMC also has an equivalent factorized formulation. In factorized formulation, IMC projects user/item features with a learnable matrix to get low dimensional latent factor for each user/item first, and then makes prediction by the dot product of user and item latent factors. In real applications, the factorized version of IMC is more favored  Jain and Dhillon (2013); Si et al. (2016); Chiang et al. (2015) due to its efficiency of optimization and implementation. There are lots of variants that were proposed to boost the performance of IMC, such as deep learning based IMC He et al. (2017); Wang et al. (2015). IMC refers to the factorized version in the rest of paper otherwise stated.

Unfortunately, few of existing IMC models attempt to break the above limitation and enable the models to learn context-aware representations for features, which is more intuitive in real applications as we have stated above. For example, He et al. (2017); Dziugaite and Roy (2015); Oord et al. (2013)

applied autoencoder to reconstruct the original features, and used hidden states of middle layer as representations for users/items.

He et al. (2018); Hsieh et al. (2017) adopted different functions for predictions instead of dot product. Even so many works have been proposed to improve IMC, the independent characteristic between features and shared characteristic for the same features across all users/items still exist in existing IMC models including the above works.

In this paper, we propose a novel IMC method, called collaborative self-attention (CSA), for recommender systems. The contributions of CSA are listed as follows:

The rest of paper is organized as follows. Section 2 briefly introduces some preliminaries. Section 3 presents the details of CSA. Section 4 presents the experimental results. Section 5 concludes the paper.

Suppose M∈Rn×m is the matrix that we want to recover. Given a small set of observed entries Mij,(i,j)∈Ω, |Ω|≪mn, MC aims to fill out Mij,∀(i,j)∉Ω. The objective of MC problem can be formulated as follows Candès and Recht (2009); Recht (2011):

f(Zij;Mij)=(Zij−Mij)2 for square loss, where Mij could be real-valued or binary label, and f(Zij;Mij)=−log11+exp((1−2Mij)Zij) for negative log logistic loss if Mij is a binary label and Mij∈{0,1}. Sufficient recovery theories have been made for the above MC problem. It has been shown that the matrix can be exactly recovered given sufficiently large number of observed entries. As it was shown in Cabral et al. (2013); Yao and Li (2018); Fan et al. (2017); Jain et al. (2013), MC can be solved by matrix factorization (MF) technique.

where λw and λh are hyper-parameters for regularization terms. W∈Rn×d and H∈Rm×d. The rows of W (H) denote latent factors of users (items). d is the dimension of latent factor. There are lots of variants that were proposed to boost the performance of MC. For example, Hsieh et al. (2017); He et al. (2018) adopt different score function instead of dot product. He et al. (2017); Dziugaite and Roy (2015)

In many real applications, side information can also be collected besides rating matrix, such as user/item features. Motivated by this, inductive matrix completion (IMC) Xu et al. (2013); Jain and Dhillon (2013) was proposed to utilize side information. Similar to MC, factorized version of IMC can be formulated as follows Jain and Dhillon (2013); Zhang et al. (2018):

where λu and λv are hyper-parameters for regularization terms. X∈Rn×u (Y∈Rm×v) denotes the input user (item) features. u (v) denotes the dimension of features. U∈Ru×d (V∈Rv×d) is the mapping matrix of user (item) features. Because Xi∗U=∑ut=1XitUt∗, we find that IMC actually learns an individual representation for each feature (e.g, XitUt∗ for feature t), which is independent from each other. Moreover, representation for feature t with value Xit is shared across all users. As we have stated in the previous section, although lots of variants were proposed to boost the performance of the IMC model, the independent characteristic between features and shared characteristic for the same features across all users/items still exist in existing IMC models.

For features of user/item, we need to learn embedding vectors for them. Let U∈Ru×d (V∈Rv×d) denote the embedding vectors of user (item) features. Taking the values of features into consideration, the input representations with respect to a specific user i (item j) for the following parts of CSA are denoted as U(1)∈Ru×d (V(1)∈Rv×d), which are formulated as follows:

where WQ,WK,WP∈Rd×d and they are parameters we need to learn. If U(in) is sparse with respect to row, masked softmax would be performed instead of softmax. From the above formulations, we can see that each row of U(attn) is conditioned on all rows of U(in). It indicates that U(attn) can capture the relationships between different rows of U(in) within the scenarios of user i. Instead of applying single-head attention on the inputs, we adopt multi-head attention to get stable outputs:

where W(ffn)1∈Rd×dff, W(ffn)2∈Rdff×d and they are parameters we need to learn.

Given definitions of the self-attention layer and feed-forward network layer, we denote the parameters that we need to learn as W(enc)={WQ,WK,WP,W(ffn)1,b(ffn)1,W(ffn)2,b(ffn)2}. Then, U(out) with user i can be summarized as follows:

where SelfAttention(⋅) summarizes the self-attention layer and feed-forward layer. W(enc)U denotes the parameters with respect to user within-encoder. Similarly, we can get the output representation for a specific item j:

Let O(1)=[U(enc),V(enc)]. ‘Cross’ context-aware representations for U(enc) and V(enc) with respect to the specific user i and item j are formulated as follows:

Taking O(1) as inputs for the first cross-encoder layer, repeated application of SelfAttention(⋅) can generate ‘cross’ context-aware representations for features of user i (item j), denoted as [U(final),V(final)]=O(final), which are outputs of the multilayer cross-encoder. Hence, U(final) and V(final) are conditioned on scenarios of both user i and item j.

After getting the context-aware representations for features of user i and item j, we feed them to the prediction layer and make prediction for (i,j).

By combining the above parts, CSA is formulated as follows:

We evaluate our proposed CSA and other baselines on three real world datasets, which are publicly available. CSA and all baselines are implemented on PyTorch

LastFM 222https://www.dtic.upf.edu/ ocelma/MusicRecommendationDataset/ is a music artist recommendation dataset Celma (2010), which is also collected from real industrial application. The music artists mainly consist of categorical features (e.g, gender, age, location). Interactions between users and music artists are play counts, which are summarized from the play history lists of users. As Pacula (2017)

The statistics of the above three datasets are summarized in Table 3.

. Maximum epoch is set to 20. We use validation set to tune this hyper-parameters. Dropout rate is set to 0.2, and it’s applied to all layers’ inputs. The number of layer is set to 1 for user within-encoder, item within-encoder and cross-encoder.

as evaluation criteria. The larger the AUC is, the better the performance will be. All methods are run with best hyper-parameters that are tuned with validation set on different datasets. We repeat the experiments 5 times and report the mean of results. Since the standard deviation is very small (approximately 0.0002), we omit it in the tables and figures.

To compare CSA againts baselines, we empirically set d=32. The results on ShortVideo-Track1, ShortVideo-Track2 and LastFM are summarized in Tables 3, 3 and 4. From Tables 3, 3 and 4, we can see that CSA consistently outperforms all baselines in most cases, which demonstrates the effectiveness of CSA. We observe that the margin between CSA and baselines becomes smaller with sampling rate increased. The main reason is that IMCs have the ability to catch the underlying pattern when the number of observed entries is large enough according to the recovery theory in Xu et al. (2013); Jain and Dhillon (2013). Please note that the cases with small ρ of observed samples are more common in real recommendation systems. Moreover, users/items with small ρ of observed samples are often new users/items to the systems, and accurate recommendation for new users/items are necessary. Hence, good performance at small ρ is more meaningful.

We perform visualization on LastFM dataset. In order to verify that representations for features learned by CSA are context-aware, we visualize the representations learned by CSA. Firstly, we pick users whose country feature is ‘United States’ as the database. Secondly, we randomly pick a user from the database as the center user. We define the distance between other users and the center user as the number of the different features they have. Finally, we pick users from the database whose distance to center user is 1, 3, 5. For each distance, 100 users are selected. Finally, we visualize the ‘within’ context-aware representations for the country feature of these selected users and center user.

In this paper, we propose a novel IMC method, called collaborative self-attention (CSA), for recommender systems. CSA is a novel self-attention based deep architecture that can collaboratively learn contex-aware representations for features. To the best of our knowledge, CSA is the first context-aware IMC model without independent characteristic between features and shared characteristic for the same features across all users/items, which limit the exprexssiveness of existing IMC models. Extensive experiments on three large-scale datasets from RS applications demonstrate the effectiveness of CSA.