Collaborative Representation Classification (CRC) for face recognition attracts a lot attention recently due to its good recognition performance and fast speed. Compared to Sparse Representation Classification (SRC), CRC achieves a comparable recognition performance with 10-1000 times faster speed. In this paper, we propose to ensemble several CRC models to promote the recognition rate, where each CRC model uses different and divergent randomly generated biologically-inspired features as the face representation. The proposed ensemble algorithm calculates an ensemble weight for each CRC model that guided by the underlying classification rule of CRC. The obtained weights reflect the confidences of those CRC models where the more confident CRC models have larger weights. The proposed weighted ensemble method proves to be very effective and improves the performance of each CRC model significantly. Extensive experiments are conducted to show the superior performance of the proposed method. 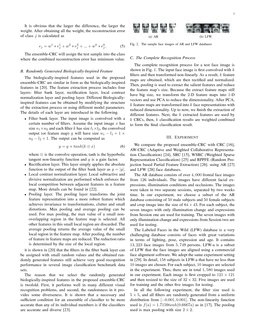 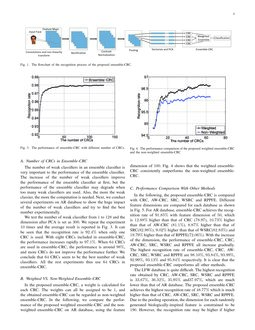 Recently, the face recognizers based on linear representations have been...
Hanxi Li, et al. ∙

One of the biggest problems in deep learning is its difficulty to retain...
Shaoning Zeng, et al. ∙

Face recognition is one of the hottest research topics in computer vision due to its wide range of applications, from public security to personal consumer electronics. Although signicicant improvement has been achieved in the past decades, a reliable face recognition system for real life environments is still very challenging to build due to the large intra-class facial variations, such as expression, illumination, pose, aging and the small inter-class facial differences

For a face recognition system, face representation and classifier construction are the two key factors. face representation can be divided into two categories: holistic feature based and local feature based. Principle Component Analysis (PCA) based Eigenface [2] and Linear Discriminative Analysis (LDA) based Fisherface [3] are the two most famous holistic face representations. PCA projects the face image into a subspace such that the most variations are kept, which is optimal in terms of face reconstruction. LDA considers the label information of the training data and linearly projects face image into a subspace such that the ratio of the between-class scatter over the within-class scatter is maximized. Both PCA and LDA projects the face image into a low dimensional subspace on which the classification is easier. It is based on an assumption that the high dimensional face images lie on a low dimensional subspace or sub-manifold. Therefore, it is beneficial to first project the high dimensional face image into that low dimensional subspace to extract the main structure of the face data and reduce the impact of the unimportant factors, such as illumination changes. Many other holistic face representations have been proposed later, including Locality Preserving Projection (LPP) [4]

The holistic face representation is known to be sensitive to expression, illumination, occlusion, noise and other local distortions. The local face representation which extracts features by using local information is shown to be more robust against those factors. The most commonly used local features in face recognition include Local Binary Pattern (LBP) [9], Gabor Wavelets [10], Scale-Invariant Feature Transform (SIFT) [11], Histogram of Oriented Gradients (HOG) [12] and so on.

To classify the extracted representations of faces into correct classes, a classier needs to be constructed. Many classifiers have been proposed and the most widely used classifier is the Nearest neighbor classifier (NN) and it is improved by Nearest Feature Line (NFL) [13], Nearest Feature Plane (NFP) [14] and Nearest Feature Space (NFS) [14] in different ways. Recently, Sparse Representation Classification (SRC) [15] is proposed and shows good recognition performance and is robust to random pixel noise and occlusion. SRC codes the test sample as a sparse linear combination of all training samples by exposing an l1-norm constraint on the resulting coding coefficients. The l1-norm constraint is very expensive which is the main obstacle of applying SRC in large scale face recognition systems. Lately, Collaborative Representation Classification (CRC) [16] is proposed which achieves comparable performance to SRC and has a much faster recognition speed. The author in [16] finds that it is the collaborative representation not the l1-norm constraint that is important in the classification process. By replacing the slow l1-norm with a much fast l2-norm constraint, CRC codes each test sample as a linear combination of all the training faces with a closed-form solution. As a result, CRC can recognize a test sample 10-1000 times faster than SRC as shown in [16].

In this paper, we propose to ensemble several CRCs to boost the performance of CRC. Each CRC is a weak classifier are combined to construct the strong classifier named ensemble-CRC. For each test sample, several different face representations are extracted. Then, severl CRCs are used to make the classification using those face representations. A weight is then calculated and assigned to each CRC by considering the reconstruction residue characteristics. By analyzing the magnitude relationship between reconstruction residues of different classes, the highly correct CRC can be identified. Large weights are assigned to those highly correct CRCs and small weights are assigned to the rest CRCs. Finally, the classification is obtained by a weighted combination of the reconstruction residues of all CRCs.

The rest of the paper is organized as follows. Section II introduces the proposed ensemble-CRC method. Section III conducts extensive experiments to verify the effectiveness of ensemble-CRC. Finally, Section IV concludes the paper.

where λ is the regularization parameter. The solution of the above problem can be obtained analytically as

be the characteristic function that keeps the coefficients of class

CRC classifies y into the class that has minimum reconstruction error.

The ensemble-CRC will assign the test sample into the class where the combined reconstruction error has minimum value.

. The feature extraction process includes four layers: filter bank layer, rectification layer, local contrast normalization layer and pooling layer. Different Biologically-inspired features can be obtained by modifying the structure of the extraction process or using different model parameters. The details of each layer are introduced in the following.

it is shown in [20] that the filters in the filter bank layer can be assigned with small random values and the obtained randomly generated features still achieve very good recognition performance in several image classification benchmark data sets.

The reason that we select the randomly generated biologically-inspired features in the proposed ensemble-CRC is twofold. First, it performs well in many different visual recognition problems, and second, the randomness in it provides some diverseness. It is shown that a necessary and sufficient condition for an ensemble of classifier to be more accurate than any of its individual members is if the classifiers are accurate and diverse [23].

The complete recognition process for a test face image is shown in Fig. 1. The input face image is first convolved with k filters and then transformed non-linearly. As a result, k feature maps are obtained, which are then rectified and normalized. Then, pooling is used to extract the salient features and reduce the feature map’s size. Because the extract feature maps still have big size, we transform the 2-D feature maps into 1

-D vectors and use PCA to reduce the dimensionality. After PCA,

k feature maps are transformed into k face representations with reduced dimensionality. Up to now, we finish the extraction of different features. Next, the k extracted features are used by k CRCs, then, k classification results are weighted combined to form the final classification result.

The Labeled Faces in the Wild (LFW) database is a very challenging database consists of faces with great variations in terms of lighting, pose, expression and age. It contains 13,223 face images from 5,749 persons. LFW-a is a subset of LFW that the face images are aligned using a commercial face alignment software. We adopt the same experiment setting in [29]. In detail, 158 subjects in LFW-a that have no less than 10 images are chosen. For each subject, 10 images are selected in the experiment. Thus, there are in total 1,580 images used in our experiment. Each image is first cropped to 121×121 and then resized to the size of 32×32. Five images are used for training and the other five images for testing.

In all the following experiment, the filter size used is 5×5

, and all filters are randomly generated from a uniform distribution from

Iii-a Number of CRCs in Ensemble-CRC

Iii-C Performance Comparison With Other Methods

The LFW database is quite difficult. The highest recognition rate obtained by CRC, AW-CRC, SRC, WSRC and RPPFE is 33.67%, 36.32%, 35.95% and37.97%, which are much lower than that of AR database. The proposed ensemble-CRC achieves the highest recognition rate of 48.77% which is much higher than that of CRC, AW-CRC, SRC, WSRC and RPPFE. Due to the pooling operation, the dimension for each randomly generated biologically-inspired feature is constrained to be 190. However, the recognition rate may be higher if higher dimension of randomly generated biologically-inspired feature can be used (e.g., larger input image size), which can be inferred from the recognition rate curve of ensemble-CRC.

In this paper, a novel face recognition algorithm named ensemble-CRC is proposed. Ensemble-CRC utilizes the randomly generated biologically-inspired feature to create many high-performance and diverse CRCs which are combined using a weighted manner. The experimental result shows that the proposed ensemble-CRC outperforms the CRC, AW-CRC, SRC, WSRC and RPPFE.