Information-theoretic limits of cognitive radio networks have been under exploration for more than a decade. Although such limits are unknown for many networks, including the simplest case with two pairs of transmitter-receiver, there are several cases for which the capacity limits are obtained either exactly or up to a constant gap. The goal of this chapter is to provide insights into the nature of transmission techniques associated with optimal communication when cognitive radio technology is used. emphasis on 5G networks. Outlining the state of the art in the information-theoretic analysis of different cognitive systems, we highlight the salient features/points of the capacity-achieving or capacity-approaching strategies that should be considered in wireless network design paradigms based on this technology. In particular, we emphasize the interaction of cognitive radio with emerging technologies for 5G networks. 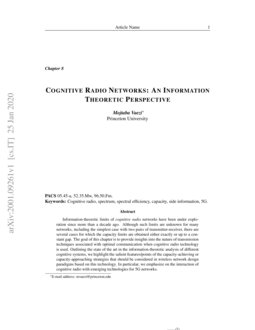 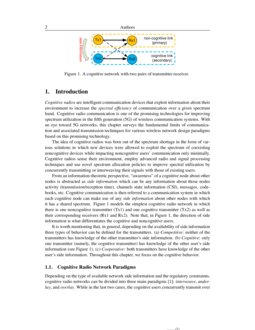 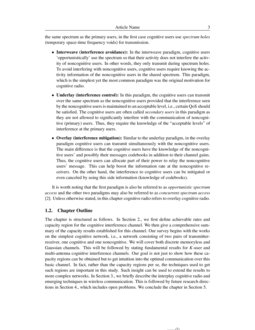 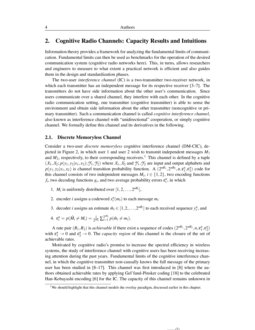 The idea of cognitive radios was born out of the spectrum shortage in the form of various solutions in which new devices were allowed to exploit the spectrum of coexisting noncognitive devices while impacting noncognitive users’ communication only minimally. Cognitive radios sense their environment, employ advanced radio and signal processing techniques and use novel spectrum allocation policies to improve spectral utilization by concurrently transmitting or interweaving their signals with those of existing users.

Information theory provides a framework for analyzing the fundamental limits of communication. Fundamental limits can then be used as benchmarks for the operation of the desired communication system (cognitive radio networks here). This, in turns, allows researchers and engineers to measure to what extent a practical network is efficient and also guides them in the design and standardization phases.

Consider a two-user discrete memoryless cognitive interference channel (DM-CIC), depicted in Figure 2.1., in which user 1 and user 2 wish to transmit independent messages M1 and M2, respectively, to their corresponding receivers.111We should highlight that this channel models the overlay paradigm, discussed earlier in this chapter. This channel is defined by a tuple (X1,X2;p(y1,y2|x1,x2);Y1,Y2) where X1,X2 and Y1,Y2 are input and output alphabets and p(y1,y2|x1,x2)

is channel transition probability function. A

A rate pair (R1,R2) is achievable if there exist a sequence of codes (2nR1,2nR2,n,ϵn1,ϵn2) with ϵn1→0 and ϵn2→0. The capacity region of this channel is the closure of the set of achievable rates.