In this paper, we propose CodedSketch, as a distributed straggler-resistant scheme to compute an approximation of the multiplication of two massive matrices. The objective is to reduce the recovery threshold, defined as the total number of worker nodes that we need to wait for to be able to recover the final result. To exploit the fact that only an approximated result is required, in reducing the recovery threshold, some sorts of pre-compression are required. However, compression inherently involves some randomness that would lose the structure of the matrices. On the other hand, considering the structure of the matrices is crucial to reduce the recovery threshold. In CodedSketch, we use count--sketch, as a hash-based compression scheme, on the rows of the first and columns of the second matrix, and a structured polynomial code on the columns of the first and rows of the second matrix. This arrangement allows us to exploit the gain of both in reducing the recovery threshold. To increase the accuracy of computation, multiple independent count--sketches are needed. This independency allows us to theoretically characterize the accuracy of the result and establish the recovery threshold achieved by the proposed scheme. To guarantee the independency of resulting count--sketches in the output, while keeping its cost on the recovery threshold minimum, we use another layer of structured codes. 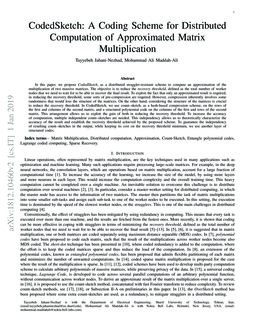 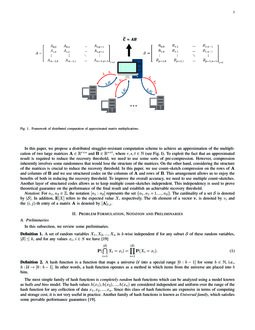 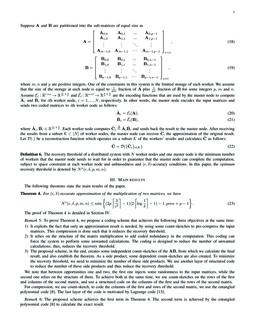 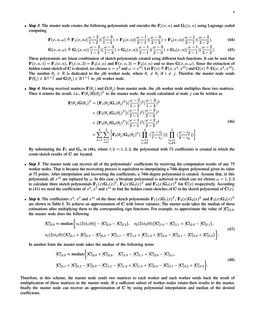 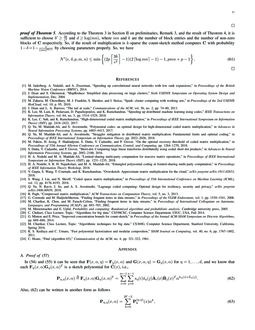 Linear operations, often represented by matrix multiplication, are the key techniques used in many applications such as optimization and machine learning. Many such applications require processing large-scale matrices. For example, in the deep neural networks, the convolution layers, which are operations based on matrix multiplication, account for a large fraction of computational time

. To increase the accuracy of the learning, we increase the size of the model, by using more layers and more neurons in each layer. This would increase the computation complexity and the overall training time. This heavy computation cannot be completed over a single machine. An inevitable solution to overcome this challenge is to distribute computation over several machines

[2, 3]. In particular, consider a master-worker setting for distributed computing, in which the master node has access to the information of two matrices. The master then partitions the task of matrix multiplications into some smaller sub-tasks and assign each sub-task to one of the worker nodes to be executed. In this setting, the execution time is dominated by the speed of the slowest worker nodes, or the stragglers. This is one of the main challenges in distributed computing [4].

Conventionally, the effect of stragglers has been mitigated by using redundancy in computing. This means that every task is executed over more than one machine, and the results are fetched from the fastest ones. More recently, it is shown that coding can be more effective in coping with stragglers in terms of minimizing the recovery threshold, defined as the total number of worker nodes that we need to wait for to be able to recover the final result [5, 6, 7, 8, 9, 10, 11, 12, 13]. In [5, 6], it is suggested that in matrix multiplication, one or both matrices are coded separately using maximum distance separable (MDS) codes. In [7], polynomial codes have been proposed to code each matrix, such that the result of the multiplications across worker nodes become also MDS coded. The short-dot technique has been presented in [10], where coded redundancy is added to the computation, where the effort is to keep the coded matrices sparse and thus reduce the load of the computation. In [8], an extension of the polynomial codes, known as entangled polynomial codes, has been proposed that admits flexible partitioning of each matrix and minimizes the number of unwanted computations. In [14], coded sparse matrix multiplication is proposed for the case where the result of the multiplication is sparse. In [11, 12], coded schemes have been used to develop multi-party computation scheme to calculate arbitrary polynomials of massive matrices, while preserving privacy of the data. In [15], a universal coding technique, Lagrange Code, is developed to code across several parallel computations of an arbitrary polynomial function, without communication across worker nodes. To derive an approximate result of the matrix multiplication over a single server, in [16]

[17, 18], or Subsection II-A on preliminaries in this paper. In [13], the OverSketch method has been proposed where some extra count-sketches are used, as a redundancy, to mitigate stragglers in a distributed setting.

In this paper, we propose a distributed straggler–resistant computation scheme to achieve an approximation of the multiplication of two large matrices A∈Rr×s and B∈Rs×t, where r,s,t∈N (see Fig. 1). To exploit the fact that an approximated result is required to reduce the recovery threshold, we need to use some sorts of pre-compression. However, compression inherently involves some randomness that would lose the structure of the matrices. On the other hand, considering the structure of the matrices is crucial to reduce the recovery threshold. In this paper, we use count–sketch compression on the rows of A and columns of B and we use structured codes on the columns of A and rows of B. This arrangement allows us to enjoy the benefits of both in reducing the recovery threshold. To improve the overall accuracy, we need to use multiple count–sketches. Another layer of structured codes allows us to keep multiple count–sketches independent. This independency is used to prove theoretical guarantee on the performance of the final result and establish an achievable recovery threshold.

th element of a vector

In this subsection, we review some preliminaries.

A set of random variables

A hash function is a function that maps a universe U into a special range [0:b−1] for some b∈N, i.e., h:U→[0:b−1]. In other words, a hash function operates as a method in which items from the universe are placed into b bins.

The hash family H is defined as a k-universal family if for any hash function h:U→[0:b−1] with |U|≥b, chosen uniformly at random from H, and for any collection of x1,x2,...,xk, we have

In addition H is defined as a strongly k-universal family if for any values y1,...,yk∈[0:b−1] we have

This definition implies that for any fix x∈U, h(x)

The values h(x1),h(x2),...,h(xk) are k-wise independent if the hash function h is chosen from a strongly k-universal family.

is an estimation of

Corollary 2 shows that by choosing d=O(logn)

Suppose n-length vector a has only k nonzero entries. Then, from Corollary 2, one can see that an approximated version of a with accuracy ϵ=O(1√k) can be achieved by d=O(logn) count-sketches.

According to Theorem 3, if the n-length vector a has only k nonzero entries, then the output of the count-sketch method computes a exactly with probability 1−1nΘ(1).

The count-sketch of an n-dimensional vector a can be represented by a polynomial, named sketch polynomial, as

then pabT(α)≜pa(α)pb(α) represents a sketch polynomial for matrix abT, as

Also, the hash function on pairs (i,j) is

where m,n and p are positive integers. One of the constraints in this system is the limited storage of each worker. We assume that the size of the storage at each node is equal to 1pm fraction of A plus 1pn fraction of B for some integers p, m and n. Assume Ei:Rr×s→Rrm×sp and ~Ei:Rs×t→Rsp×tn are the encoding functions that are used by the master node to compute ~Ai and ~Bi for ith worker node, i=1,...,N, respectively. In other words, the master node encodes the input matrices and sends two coded matrices to ith worker node as follows:

where ~Ai,~Bi∈Rrm×sp. Each worker node computes ~CiΔ=~Ai~Bi and sends back the result to the master node. After receiving the results from a subset K⊂[N] of worker nodes, the master node can recover ~C, the approximation of the original result. Let D(.) be a reconstruction function which operates on a subset K of the workers’ results and calculates ~C as follows:

The following theorems state the main results of the paper.

For (ϵ,δ)-accurate approximation of the multiplication of two matrices, we have

The proof of Theorem 4 is detailed in Section IV.

To prove Theorem 4, we propose a coding scheme that achieves the following three objectives at the same time:

For compression, we use count-sketch, to code the columns of the first and rows of the second matrix, we use the entangled polynomial code [8]. The last layer of the code is motivated by Lagrange code [15].

The proposed scheme achieves the first term in Theorem 4. The second term is achieved by the entangled polynomial code [8] to calculate the exact result.

If the original result C is k-sparse, i.e., only a kmn fraction of the entries of matrix is non-zero, then the proposed method computes C exactly with probability 1−δ=1−1(mn)Θ(1) and with the recovery threshold of

Note that kmn fraction of the matrix C is, in size, equivalent of k blocks of matrix C partitioned as m×n.

The proof of Theorem 5 is detailed in Section IV. In that section, we formally describe the proposed scheme and the decoding procedure.

In the following, the goal is to compute the approximation of the matrix multiplication over a distributed system using CodedSketch scheme.

We first demonstrate the main idea of our scheme through a simple example. We then generalize this approach in the next section. Consider a distributed system with one master node and N worker nodes which aim to collaboratively compute ~C as an approximation of C=AB where A and B are two matrices partitioned as follows

The result of the multiplication can be computed using summation of four outer products as C=∑3k=0AkBTk, where Ak and Bk are the kth column of A and kth row of B respectively. The proposed scheme is based on the following steps.