Appropriate comments of code snippets provide insight for code functionality, which are helpful for program comprehension. However, due to the great cost of authoring with the comments, many code projects do not contain adequate comments. Automatic comment generation techniques have been proposed to generate comments from pieces of code in order to alleviate the human efforts in annotating the code. Most existing approaches attempt to exploit certain correlations (usually manually given) between code and generated comments, which could be easily violated if the coding patterns change and hence the performance of comment generation declines. In this paper, we first build C2CGit, a large dataset from open projects in GitHub, which is more than 20× larger than existing datasets. Then we propose a new attention module called Code Attention to translate code to comments, which is able to utilize the domain features of code snippets, such as symbols and identifiers. We make ablation studies to determine effects of different parts in Code Attention. Experimental results demonstrate that the proposed module has better performance over existing approaches in both BLEU and METEOR. 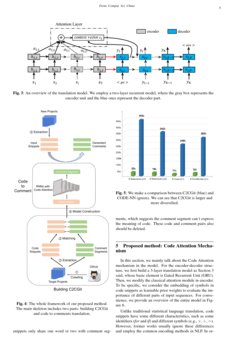 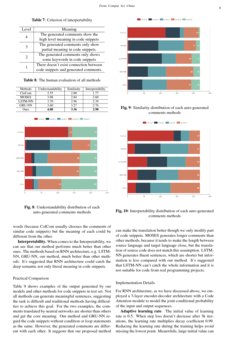 Program comments usually provide insight for code functionality, which are important for program comprehension, maintenance and reusability. For example, comments are helpful for working efficiently in a group or integrating and modifying open-source software. However, because it is time-consuming to create and update comments constantly, plenty of source code, especially the code from open-source software, lack adequate comments [fluri2007code]. Source code without comments would reduce the maintainability and usability of software.

To mitigate the impact, automatic program annotation techniques have been proposed to automatically supplement the missing comments by analyzing source code. [sridhara2010towards]generated summary comments by using variable names in code. [rastkar] managed to give a summary by reading software bug reports. [mcburney2014automatic] leveraged the documentation of API to generate comments of code snippets.

As is well known, source code are usually structured while the comments in natural language are organized in a relatively free form. Therefore, the key in automatic program annotation is to identify the relationship between the functional semantics of the code and its corresponding textual descriptions. Since identifying such relationships from the raw data is rather challenging due to the heterogeneity nature of programming language and natural language, most of the aforementioned techniques usually rely on certain assumptions on the correlation between the code and their corresponding comments (e.g., providing paired code and comment templates to be filled in), based on which the code are converted to comments in natural language. However, the assumptions may highly be coupled with certain projects while invalid on other projects. Consequently, these approaches may have large variance in performances on real-world applications.

In order to improve the applicability of automatic code commenting, machine learning has been introduced to learn how to generate comments in natural language from source code in programming languages.

treated source code as natural language texts, and learned a neural network to summarize the words in source code into briefer phrases or sentences. However, as pointed out by

[huo2016learning], source code carry non-negligible semantics on the program functionality and should not be simply treated as natural language texts. Therefore, the comments generated by [srinivasan2016summarizing] may not well capture the functionality semantics embedded in the program structure. For example, as shown in Figure LABEL:code0, if only considering the lexical information in this code snippet, the comment would be “swap two elements in the array”. However, if considering both the structure and the lexical information, the correct comment should be “shift the first element in the array to the end”.