Taxonomies play an important role in machine intelligence. However, most well-known taxonomies are in English, and non-English taxonomies, especially Chinese ones, are still very rare. In this paper, we focus on automatic Chinese taxonomy construction and propose an effective generation and verification framework to build a large-scale and high-quality Chinese taxonomy. In the generation module, we extract isA relations from multiple sources of Chinese encyclopedia, which ensures the coverage. To further improve the precision of taxonomy, we apply three heuristic approaches in verification module. As a result, we construct the largest Chinese taxonomy with high precision about 95 called CN-Probase. Our taxonomy has been deployed on Aliyun, with over 82 million API calls in six months. 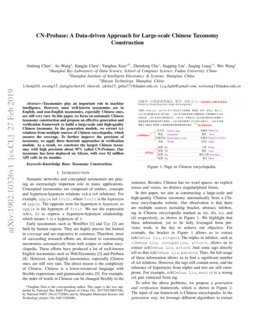 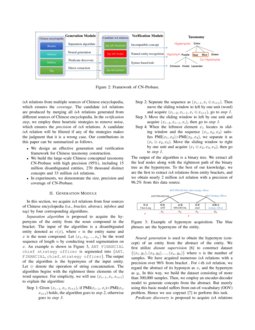 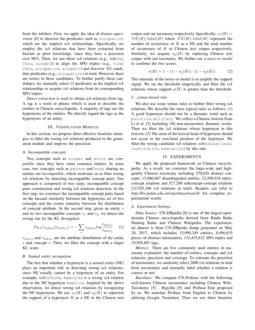 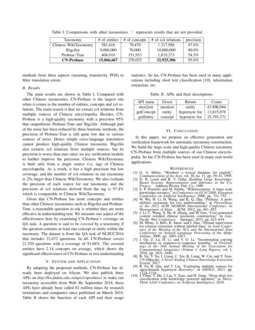 Taxonomy is not only a fundamental form of knowledge representation, but...
Jiaxin Huang, et al. ∙

Knowledge graph is a kind of valuable knowledge base which would benefit...
Feiliang Ren, et al. ∙

Taxonomies are of great value to many knowledge-rich applications. As th...
Jiaming Shen, et al. ∙

Classification of entities via their descriptive sentences

Semantic networks and conceptual taxonomies are playing an increasingly important role in many applications. Conceptual taxonomies are composed of entities, concepts and hypernym-hyponym relations (a.k.a isA relations). For example, apple isA fruit, where fruit is the hypernym of apple. The opposite term for hypernym is hyponym, so apple is the hyponym of fruit. We use the expression isA(A, B) to express a hypernym-hyponym relationship, which means A is a hyponym of B.

Early taxonomies such as WordNet [1] and Cyc [2] are built by human experts. They are highly precise but limited in coverage and are expensive to construct. Therefore, most of succeeding research efforts are devoted to constructing taxonomies automatically from web corpus or online encyclopedia. These efforts have produced a lot of well-known English taxonomies such as WikiTaxonomy [3] and Probase [4]. However, non-English taxonomies, especially Chinese ones, are still very rare. The direct reason is the complexity of Chinese. Chinese is a lower-resourced language with flexible expressions and grammatical rules [5]. For example, the order of words in Chinese can be changed flexibly in the sentence. Besides, Chinese has no word spaces, no explicit tenses and voices, no distinct singular/plural forms.

In this paper, we aim at constructing a large-scale and high-quality Chinese taxonomy automatically from a Chinese encyclopedia website. Our observation is that there are multiple sources including bracket, abstract, infobox, tag in Chinese encyclopedia marked as (a), (b), (c), and (d) respectively, as shown in Figure 1. We highlight that these information, yet to be fully leveraged from previous work, is the key to achieve our objective. For example, the bracket in Figure 1 allows us to extract isA(Dehua Liu, singer). The triples in infobox, such as <Dehua Liu, occupation, actor>, allows us to extract isA(Dehua Liu, actor). And some tags directly tell us that isA(Dehua Liu, person). Thus, the full usage of these information allows us to find a significant number of isA relations. However, the tags still contain noise, and the inference of hypernyms from triples and text are still error-prone. For example, isA(Dehua Liu, music) is a wrong isA pair extracted from tag.

In this section, we acquire isA relations from four sources of Chinese encyclopedia (i.e., bracket, abstract, infobox and tag) by four corresponding algorithms.

Separation algorithm is proposed to acquire the hypernyms of the entity from the noun compound in the bracket. The input of the algorithm is a disambiguated entity denoted as e(x), where e is the entity name and x is the noun compound. Let (x1,x2,...,xn) be the word sequence of length n by conducting word segmentation on x. An example is shown in Figure 3, ANT FINANCIAL chief strategy officer is segmented into {ANT, FINANCIAL, chief, strategy officer}. The output of the algorithm is the hypernyms of the input entity. Let ⊕ denote the operation of string concatenation. The algorithm begins with the rightmost three elements of the word sequence. For simplicity, we will use (xi−1,xi,xi+1) to explain the algorithm:

Move the sliding window to left by one unit and acquire (xi−2,xi−1,xi), then go to step 1.

The output of the algorithm is a binary tree. We extract all the leaf nodes along with the rightmost path of the binary tree as the hypernyms. To the best of our knowledge, we are the first to extract isA relations from entity brackets, and we obtain nearly 2 million isA relation with a precision of 96.2% from this data source.

Neural generation is used to obtain the hypernym (concept) of an entity from the abstract of the entity. We first utilize distant supervision [6] to construct dataset {(x1,y1),(x2,y2),...,(xn,yn)} where n is the number of samples. We have acquired numerous isA relations with a precision over 96% from bracket . For i-th isA relation, we regard the abstract of its hyponym as xi and the hypernym as yi. In this way, we build the dataset consisting of more than 300,000 samples. Then, we employ an encoder-decoder model to generate concepts from the abstract. But merely using this basic model suffers from out-of-vocabulary (OOV) problem. Hence we use copynet[7] to perform this task.

In this section, we propose three effective heuristic strategies to filter the wrong isA relations produced in the generation module and improve the precision.

vatt(e) and vatt(c) are the attribute distribution of the entity e and concept c. Then, we filter the concept with a larger KL score.

The fact that whether a hypernym is a named entity (NE) plays an important role in detecting wrong isA relations, since NE usually cannot be a hypernym of an entity. For example, isA(iPhone, America) is a wrong isA relation due to the NE hypernym America. Inspired by the above observation, we detect wrong isA relations by recognizing the NE hypernyms. We use s1(H) and s2(H) to represent the support of a hypernym H as a NE in the Chinese text corpus and our taxonomy respectively. Specifically, s1(H)=NE(H)/total(H) where NE(H),total(H) represent the number of occurrence of H as a NE and the total number of occurrence of H in Chinese text corpus respectively. Similarly, we acquire s2(H) by replacing Chinese text corpus with our taxonomy. We further use a noisy-or model to combine the two scores.

The rationale of the noisy-or model is to amplify the support signal. We set the threshold emperically and filter the isA relations whose support s(H) is greater than the threshold.

We also use some syntax rules to further filter wrong isA relations. We describe the most typical rules as follows: (1) A good hypernym should not be a thematic word such as politics, military

. We collect a Chinese lexicon from Li et al.

[5] including 184 non-taxonomies, thematic words. Then we filter the isA relations whose hypernym in this lexicon; (2) The stem of the lexical head of hypernym should not occur in the non-head position of the hyponym. We filter the wrong candidate isA relations isA(educational institution, education) by this rule.

We apply the proposed framework on Chinese encyclopedia. As a result, we construct the large-scale and high-quality Chinese taxonomy including 270,026 distinct concepts, 15,066,667 disambiguated entities, 32,398,018 entity-concept relations and 527,288 subconcept-concept relations (32,925,306 isA relations in total). Readers can refer to http://kw.fudan.edu.cn/cnprobase/search/ for complete experimental results.

There are five commonly used metrics in taxonomy evaluation: the number of entities, concepts and isA

relations, precision and coverage. To estimate the precision of taxonomies, we randomly select 2000

isA relations in total from taxonomies and manually label whether a relation is correct or not.

We compare CN-Probase with the following well-known Chinese taxonomies including Chinese WikiTaxonomy [5] , Bigcilin [9] and Probase-Tran proposed by us. We translate Probase from English to Chinese by utilizing Google Translator. Then we use three heuristic methods from three aspects (meaning, transitivity, POS) to filter translation errors.

The main results are shown in Table I. Compared with other Chinese taxonomies, CN-Probase is the largest one when it comes to the number of entities, concepts and isA relations. The main reason is that we extract isA relations from multiple sources of Chinese encyclopedia. Besides, CN-Probase is a high-quality taxonomy with a precision 95% that outperforms Probase-Tran and Bigcilin. Although part of the noise has been reduced by three heuristic methods, the precision of Probase-Tran is still quite low due to various sources of noise. Hence simple cross-language translation cannot produce high-quality Chinese taxonomy. Bigcilin also extracts isA relations from multiple sources, but its precision is worse than ours since we use verification module to further improve the precision. Chinese WikiTaxonomy is built only from a single source (i.e. tag) of Chinese encyclopedia. As a result, it has a high precision but low coverage, and the number of isA relations in our taxonomy is 25x larger than Chinese WikiTaxonomy. We also evaluate the precision of each source for our taxonomy, and the precision of isA relations derived from the tag is 97.4% which is comparable to Chinese WikiTaxonomy.

Given that CN-Probase has more concepts and entities than other Chinese taxonomies such as Bigcilin and Probase-Tran, a reasonable question to ask is whether they are more effective in understanding text. We measure one aspect of the effectiveness here by examining CN-Probase’s coverage on QA task. A question is said to be covered by a taxonomy if the question contains at least one concept or entity within the taxonomy. The dataset is from the QA task of NLPCC2016 that includes 23,472 questions. In all, CN-Probase covers 21,520 questions with a coverage of 91.68%. The covered entities have 2.14 concepts on average, which shows the significant effectiveness of CN-Probase in text understanding

By adopting the proposed methods, CN-Probase has already been deployed on Aliyun. We also publish three APIs on http://kw.fudan.edu.cn/apis/cnprobase/ to make our taxonomy accessible from Web. By September 2018, these APIs have already been called 82 million times by research institutions and companies since published on March 2018. Table II shows the function of each API and their usage statistics. So far, CN-Probase has been used in many applications including short text classification [10], information extraction, etc.

In this paper, we propose an effective generation and verification framework for automatic taxonomy construction. We build the large-scale and high-quality Chinese taxonomy CN-Probase from multiple sources of our Chinese encyclopedia. So far, CN-Probase has been used in many real-world applications.