Identifying named entities is, in general, a practical and challenging task in the field of Natural Language Processing. Named Entity Recognition on the code-mixed text is further challenging due to the linguistic complexity resulting from the nature of the mixing. This paper addresses the submission of team CMNEROne to the SEMEVAL 2022 shared task 11 MultiCoNER. The Code-mixed NER task aimed to identify named entities on the code-mixed dataset. Our work consists of Named Entity Recognition (NER) on the code-mixed dataset by leveraging the multilingual data. We achieved a weighted average F1 score of 0.7044, i.e., 6 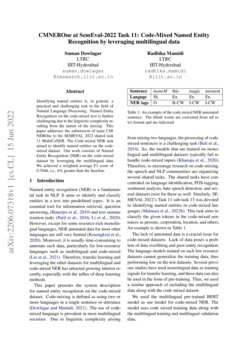 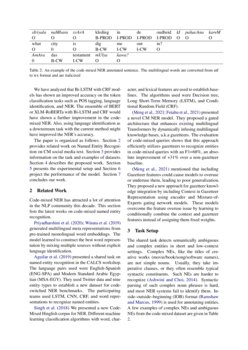 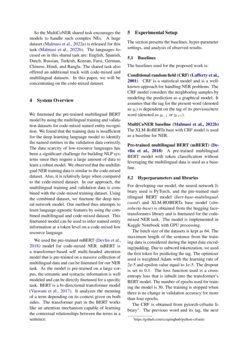 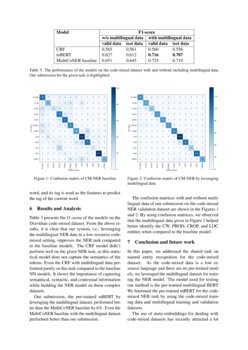 This paper describes our system, which placed third in the Multilingual ...
Weichao Gan, et al. ∙

There is an increasing interest in studying natural language and compute...
Jeniya Tabassum, et al. ∙

Named entity recognition (NER) is a fundamental task in NLP. It aims to identify and classify entities in a text into predefined types. It is an essential tool for information retrieval, question answering,

Patil et al. (2016); Li et al. (2020). However, except for some resource-rich monolingual languages, NER annotated data for most other languages are still very limited Kruengkrai et al. (2020). Moreover, it is usually time-consuming to annotate such data, particularly for low-resource languages such as multilingual and code-mixed Liu et al. (2021)

. Therefore, transfer learning and leveraging the other datasets for multilingual and code-mixed NER has attracted growing interest recently, especially with the influx of deep learning methods.

This paper presents the system description for named entity recognition on the code-mixed dataset. Code-mixing is defined as using two or more languages in a single sentence or utterance Dowlagar and Mamidi (2021). The use of code-mixed language is prevalent in most multilingual societies. Due to linguistic complexity arising from mixing two languages, the processing of code-mixed sentences is a challenging task Bali et al. (2014). So, the models that are trained on monolingual and multilingual datasets typically fail to handle code-mixed inputs Khanuja et al. (2020)

Malmasi et al. (2022b). This task aims to classify the given tokens in the code-mixed sentences as persons, corporation, location, and others. An example is shown in Table 1.

The lack of annotated data is a crucial issue for code-mixed datasets. Lack of data poses a problem of data overfitting and poor entity recognition. The language models trained on such low resource datasets cannot generalize the training data, thus performing low on the test datasets. Several previous studies have used monolingual data as training signals for transfer learning, and these data can also be used in the form of pre-training. Thus, we used a similar approach of including the multilingual data along with the code-mixed dataset.

We have analyzed that Bi-LSTM with CRF models has shown an improved accuracy on the token classification tasks such as POS tagging, language identification, and NER. The ensemble of BERT or XLM-RoBERTa with Bi-LSTM and CRF would have shown a further improvement in the code-mixed NER. Also, using language identification as a downstream task with the current method might have improved the NER’s accuracy.

The paper is organized as follows. Section 2 provides related work on Named Entity Recognition on CM social media text. Section 3 provides information on the task and examples of datasets. Section 4 describes the proposed work. Section 5 presents the experimental setup and Section 6 project the performance of the model. Section 7 concludes our work.

Code-mixed NER has attracted a lot of attention in the NLP community this decade. This section lists the latest works on code-mixed named entity recognition.

Meng et al. (2021); Fetahu et al. (2021) presented a novel CM NER model. They proposed a gated architecture that enhances existing multilingual Transformers by dynamically infusing multilingual knowledge bases, a.k.a gazetteers. The evaluation of code-mixed queries shows that this approach efficiently utilizes gazetteers to recognize entities in code-mixed queries with an F1=68%, an absolute improvement of +31% over a non-gazetteer baseline.

Meng et al. (2021) mentioned that including Gazetteer features could cause models to overuse or underuse them, leading to poor generalization. They proposed a new approach for gazetteer knowledge integration by including Context in Gazetteer Representation using encoder and Mixture-of-Experts gating network models. These models overcome the feature overuse issue by learning to conditionally combine the context and gazetteer features instead of assigning them fixed weights.

The shared task detects semantically ambiguous and complex entities in short and low-context settings. Complex NEs, like the titles of creative works (movie/book/song/software names), are not simple nouns. Usually, they take imperative clauses, or they often resemble typical syntactic constituents. Such NEs are harder to recognize Ashwini and Choi (2014). Syntactic parsing of such complex noun phrases is hard, and most NER systems fail to identify them. Inside–outside–beginning (IOB) format Ramshaw and Marcus (1999) is used for annotating entities. A few examples of complex NEs and ambiguous NEs from the code-mixed dataset are given in Table 2.

So the MultiCoNER shared task encourages the models to handle such complex NEs. A huge dataset Malmasi et al. (2022a) is released for this task Malmasi et al. (2022b). The languages focused on in this shared task are: English, Spanish, Dutch, Russian, Turkish, Korean, Farsi, German, Chinese, Hindi, and Bangla. The shared task also offered an additional track with code-mixed and multilingual datasets. In this paper, we will be concentrating on the code-mixed dataset.

model for code-mixed NER. mBERT is a transformer-based self multi-headed attention model that is pre-trained on a massive collection of multilingual data and can be finetuned for our NER task. As the model is pre-trained on a large corpus, the semantic and syntactic information is well modeled and can be directly finetuned for a specific task. BERT is a bi-directional transformer model

Vaswani et al. (2017). It analyzes the meaning of a term depending on its context given on both sides. The transformer part in the BERT works like an attention mechanism capable of learning the contextual relationships between the terms in a sentence.

The section presents the baselines, hyper-parameter settings, and analysis of observed results.

The baselines used for the proposed work is:

CRF is a statistical model and is a well-known approach for handling NER problems. The CRF model considers the neighboring samples by modeling the prediction as a graphical model. It assumes that the tag for the present word (denoted as yi) is dependent on the tag of its previous/next word (denoted as yi−1 or yi+1).

The XLM-RoBERTa base with CRF model is used as a baseline for NER.

A pre-trained multilingual BERT model with token classification without leveraging the multilingual data is used as a baseline.

For developing our model, the neural network library used is PyTorch, and the pre-trained multilingual BERT model (

bert-base-multilingual-cased) and XLM-ROBERTa base model (xlm-roberta-base) is obtained from the hugging face-transformers library and is finetuned for the code-mixed NER task. The model is implemented in Kaggle Notebook with GPU processing.

The batch size of the datasets is kept as 64. The maximum length of the sentence from the training data is considered during the input data encoding/padding. Due to subword tokenization, we used the first token for predicting the tag. The optimizer used is weighted Adam with the learning rate of 2e-5 and epsilon value equal to 1e-5. The dropout is set to 0.1. The loss function used is a cross-entropy loss that is inbuilt into the transformer’s BERT model. The number of epochs used for training the model is 30. The training is stopped when there is no change in validation accuracy for more than four epochs.

The CRF is obtained from pytorch-crfsuite library111https://github.com/scrapinghub/python-crfsuite. The previous word and its tag, the next word, and its tag is used as the features to predict the tag of the current word.

Table 3 presents the f1-score of the models on the Dravidian code-mixed dataset. From the above results, it is clear that our system, i.e., leveraging the multilingual NER data in a low-resource code-mixed setting, improves the NER task compared to the baseline models. The CRF model didn’t perform well on the given NER task, as this statistical model does not capture the semantics of the tokens. Even the CRF with multilingual data performed poorly on this task compared to the baseline NN models. It shows the importance of capturing semantical, syntactic, and contextual information while building the NER model on these complex datasets.

The use of meta embeddings for dealing with code-mixed datasets has recently attracted a lot of attention. It might be possible that meta embedding-based NER will work better on this code-mixed dataset. Unlike the social media data where code-mixed sentences/words are written in Roman script, the native script is used for each word, so the language identification will work better on this dataset. Using Language identification or POS tagging as a downstream task for NER on this dataset will help in improving the code-mixed NER.