Identification of disease subtypes and corresponding biomarkers can substantially improve clinical diagnosis and treatment selection. Discovering these subtypes in noisy, high dimensional biomedical data is often impossible for humans and challenging for machines. We introduce a new approach to facilitate the discovery of disease subtypes: Instead of analyzing the original data, we train a diagnostic classifier (healthy vs. diseased) and extract instance-wise explanations for the classifier's decisions. The distribution of instances in the explanation space of our diagnostic classifier amplifies the different reasons for belonging to the same class - resulting in a representation that is uniquely useful for discovering latent subtypes. We compare our ability to recover subtypes via cluster analysis on model explanations to classical cluster analysis on the original data. In multiple datasets with known ground-truth subclasses, most compellingly on UK Biobank brain imaging data and transcriptome data from the Cancer Genome Atlas, we show that cluster analysis on model explanations substantially outperforms the classical approach. While we believe clustering in explanation space to be particularly valuable for inferring disease subtypes, the method is more general and applicable to any kind of sub-type identification. 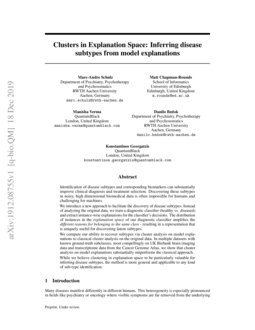 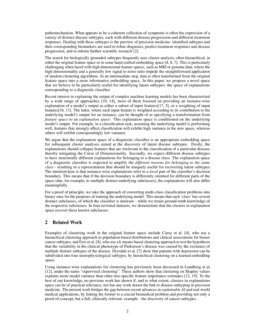 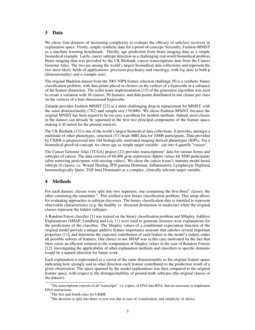 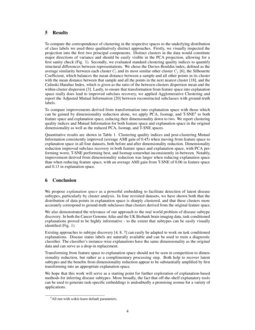 Many diseases manifest differently in different humans. This heterogeneity is especially pronounced in fields like psychiatry or oncology where visible symptoms are far removed from the underlying pathomechanism. What appears to be a coherent collection of symptoms is often the expression of a variety of distinct disease subtypes, each with different disease progression and different treatment responses. Dealing with these subtypes is the purview of precision medicine: identified subtypes and their corresponding biomarkers are used to refine diagnoses, predict treatment responses and disease progression, and to inform further scientific research [Bzdok and Meyer-Lindenberg, 2017].

. This is particularly challenging when faced with high dimensional feature spaces, such as MRI or genome data, where the high dimensionality and a generally low signal to noise ratio impede the straightforward application of modern clustering algorithms. In an intermediate step, data is often transformed from the original feature space into a more informative embedding space. In this paper, we propose a novel space that we believe to be particularly useful for identifying latent subtypes: the space of explanations corresponding to a diagnostic classifier.

different reasons for belonging to the same class - resulting in a representation that should be uniquely useful for recovering latent subtypes. The intuition here is that instance-wise explanations refer to a local part of the classifier’s decision boundary. This means that if the decision boundary is differently oriented for different parts of the space (due, for example, to multiple distinct underlying subclasses), the explanations will also differ meaningfully.

For a proof of principle, we take the approach of converting multi-class classification problems into binary ones for the purposes of training the underlying model. This means that each ‘class’ has several distinct subclasses, of which the classifier is unaware - while we retain ground-truth knowledge of the respective subclasses. In four revisited datasets, we demonstrate that the clusters in explanation space recover these known subclasses.

Examples of clustering work in the original feature space include Carey et al. [2006]

, who use a hierarchical clustering approach to population-based distributions and clinical associations for breast-cancer subtypes, and

, who use a k-means based clustering approach to test the hypothesis that the variability in the clinical phenotype of Parkinson’s disease was caused by the existence of multiple distinct subtypes of the disease.

Drysdale et al. [2017] show that patients with depression can be subdivided into four neurophysiological subtypes, by hierarchical clustering on a learned embedding space.

Using instance-wise explanations for clustering has previously been discussed in Lundberg et al. [2018]

, under the name “supervised clustering”. These authors show that clustering on Shapley values explains more model variance than other tree-specific feature importance estimates

[Lundberg et al., 2018, Saabas, 2014]. To the best of our knowledge, no previous work has shown if, and to what extent, clusters in explanations space can be of practical relevance, nor has any work drawn the link to disease-subtyping in precision medicine. The present work bridges the gap between recent advances in explainable AI and real-world medical applications, by linking the former to a crucial biomedical problem and providing not only a proof-of-concept, but a full, clinically relevant, example - the discovery of cancer-subtypes.

We chose four datasets of increasing complexity to evaluate the efficacy of subclass recovery in explanation space. Firstly, simple synthetic data for a proof-of-concept. Secondly, Fashion-MNIST as a machine learning benchmark. Thirdly, age prediction from brain imaging data as a simple biomedical example. Lastly, cancer subtype detection as a challenging real-world biomedical problem. Brain imaging data was provided by the UK Biobank, cancer transcriptome data from the Cancer Genome Atlas. The two are among the world’s largest biomedical data collections and represent the two most likely fields of applications: precision psychiatry and oncology, with big data in both p (dimensionality) and n (sample size).

The original Madelon dataset from the 2003 NIPS feature selection challenge

[Guyon et al., 2005] is a synthetic binary classification problem, with data points placed in clusters on the vertices of a hypercube in a subspace of the feature dimension. The scikit-learn implementation [Pedregosa et al., 2011] of the generative algorithm was used to create a variation with 16 classes, 50 features, and data points distributed in one cluster per class on the vertices of a four-dimensional hypercube.

Zalando provides Fashion-MNIST [Xiao et al., 2017] as a more challenging drop-in replacement for MNIST, with the same dimensionality (782) and sample size (70,000). We chose Fashion-MNIST, because the original MNIST has been argued to be too easy a problem for modern methods. Indeed, most classes in the dataset can already be separated in the first two principal components of the feature space, making it ill-suited for the present analysis.

is one of the world’s largest biomedical data collections. It provides, amongst a multitude of other phenotypes, structural (T1) brain MRI data for 10000 participants. Data provided by UKBB is preprocessed into 164 biologically motivated imaging-derived phenotypes (IDPs). For a biomedical proof-of-concept, we chose age as simple target variable - cut into 4 quartile "classes".

For each dataset, classes were split into two supersets, one containing the first three222The first and fourth class for UKBB. classes, the other containing the remainder 333The decision to split into three-vs-rest was due to ease of visualization, and simplicity of choice.. This yielded a new binary classification problem. This setup allows for evaluating approaches to subtype discovery. The binary classification data is intended to represent observable characteristics (e.g. the healthy vs. diseased distinction in medicine) while the original classes represent the hidden subtypes.

[Breiman, 2001] was trained on the binary classification problem and SHapley Additive Explanations (SHAP; Lundberg and Lee 2017) were used to generate instance-wise explanations for the predictions of the classifier. The Shapley values of a conditional expectation function of the original model provide a unique additive feature importance measure that satisfies several important properties [Lundberg and Lee, 2017], and determine the expected contribution of each feature to the model’s output, under all possible subsets of features. Our choice to use SHAP was in this case motivated by the fact that there exists an efficient solution to the computation of Shapley values in the case of Random Forests [Lundberg et al., 2018]. Investigating the applicability of other explanation methods and classifiers to specific domains would be a natural direction for future work.

To compare the correspondence of clustering in the respective spaces to the underlying distribution of class labels we used three qualitatively distinct approaches. Firstly, we visually inspected the projection into the first two principal components. Distinct clusters in the data would constitute major directions of variance and should be easily visible in the PCA projection, allowing for a first sanity check (Fig. 1). Secondly, we evaluated standard clustering quality indices to quantify structural differences between representations. We chose the Davies-Bouldin index, defined as the average similarity between each cluster Ci and its most similar other cluster Cj [Davies and Bouldin, 1979], the Silhouette Coefficient, which balances the mean distance between a sample and all other points in its cluster with the mean distance between that sample and all the points in the next nearest cluster [Rousseeuw, 1987], and the Calinski-Harabaz Index, which is given as the ratio of the between-clusters dispersion mean and the within-cluster dispersion [Caliński and Harabasz, 1974]. Lastly, to ensure that transformation from feature space into explanation space really does lead to improved subclass recovery, we applied Agglomerative Clustering and report the Adjusted Mutual Information [Vinh et al., 2010] between reconstructed subclasses with ground-truth labels.

We propose explanation space as a powerful embedding to facilitate detection of latent disease subtypes, particularly by cluster analysis. In four revisited datasets, we have shown both that the distribution of data points in explanation space is sharply clustered, and that these clusters more accurately correspond to ground-truth subclasses than clusters derived from the original feature space.

We also demonstrated the relevance of our approach to the real world problem of disease subtype discovery. In both the Cancer Genome Atlas and the UK Biobank brain imaging data, task-conditioned explanations proved to be highly informative - to the extent that subtypes can be easily visually identified (Fig. 1).

Existing approaches to subtype discovery [Carey et al., 2006, Erro et al., 2013, Drysdale et al., 2017] can easily be adapted to work on task conditioned explanations. Disease status labels are naturally available and can be used to train a diagnostic classifier. The classifier’s instance-wise explanations have the same dimensionality as the original data and can serve as a drop-in replacement.

We hope that this work will serve as a starting point for further exploration of explanation-based methods for inferring disease subtypes. More broadly, the fact that off-the-shelf explanatory tools can be used to generate task-specific embeddings is undoubtedly a promising avenue for a variety of applications.