Performing analytic of household load curves (LCs) has significant value in predicting individual electricity consumption patterns, and hence facilitate developing demand-response strategy, and finally achieve energy efficiency improvement and emission reduction. LC clustering is a widely used analytic technology, which discovers electricity consumption patterns by grouping similar LCs into same sub-groups. However, previous clustering methods treat each LC in the data set as an individual time series, ignoring the inherent relationship among different LCs, restraining the performance of the clustering methods. What's more, due to the significant volatility and uncertainty of LCs, the previous LC clustering approaches inevitably result in either lager number of clusters or huge variances within a cluster, which is unacceptable for actual application needs. In this paper, we proposed an integrated approach to address this issue. First, we converted the LC clustering task into the community detection task in network. Second, we proposed a clustering approach incorporated with community detection to improve the performance of LC clustering, which includes network construction, community detection and typical load profile extraction. The method convert the data set into a network in which the inherent relationship among LCs is represented by the edges of the network. Third, we construct a multi-layer typical load profile directory to make the trade-off between variances within a cluster and the number of the clusters, enabling the researchers to assess the LCs and the customers in different layers according to practical application requirements. The experiments demonstrate that our integrated approach outperform the state-of-the-art methods. 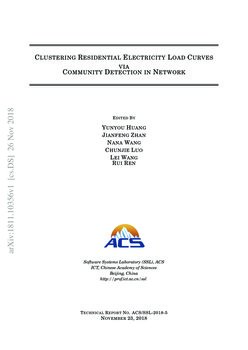 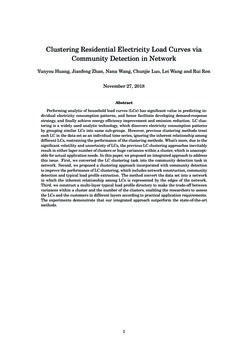 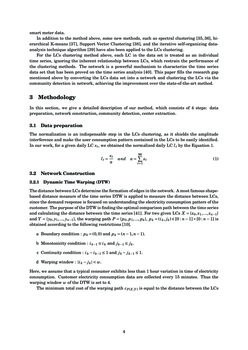 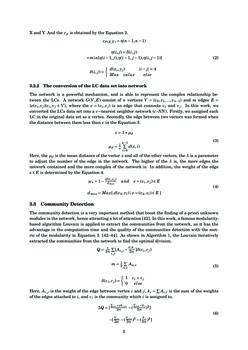 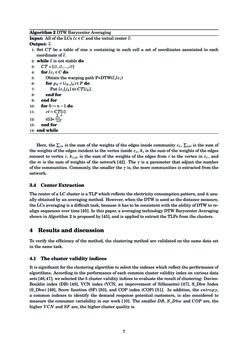 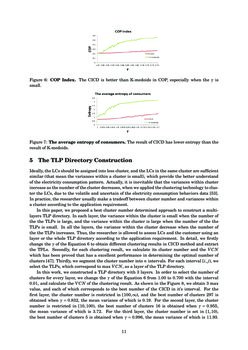 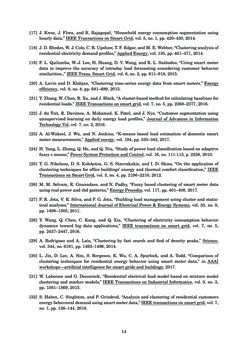 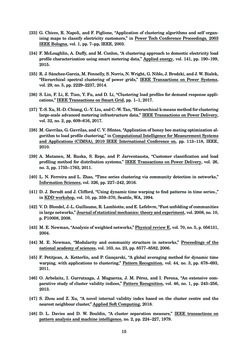 Conditional bias robust estimation of the total of curve data by sampling in a finite population: an illustration on electricity load curves

[7, 8, 6, 9, 5]. To improve the performance of LC clustering, in the recent state-of-the-art work, the Dynamic Time Warping (DTW) is recently introduced to measure the distances between the LCs, and combine the K-medoids to cluster the LCs [10]. Unfortunately, the previous LC clustering methods still have the following weakness.

In this paper, we proposed an integrated approach to address the above issue. Our approach includes two integrated parts: a new clustering method incorporated with community detection (in short, CICD) to improve the LC clustering performance, and a best-cluster-number-determined approach to make the trade-off between variances within a cluster and the number of the clusters.

As shown in Figure 1, CICD consists of network construction, community detection, and typical load profile (TLP) extraction. First, we converts the LCs data set into a ε−nearest neighbor network (ε-NN) using the distance measure DTW, characterizing both local and global inherent relationship between any pair or any groups of LCs. Second, we employ a modularity-based algorithm Louvain to synchronously optimize the local and global modularity, and obtain the optimal community partition, where a community represents a cluster. Third, we extract the centers, each of which represents a TLP, from clusters using the averaging method—DTW Barycenter Averaging—to obtain the typical electricity consumption patterns of the customers. Compared with the K-medoids&DTW clustering method in the [10], our method has significant improvement, using the metric of the common cluster validity indices.

The hierarchical methods applied to the LCs clustering includes two types: agglomerative and division, the agglomerative of which is the most commonly used technology [9]. For the agglomerative methods, each LC is firstly initialized to a cluster. Then, the two closest clusters are combined into a new cluster, thus reducing the number of clusters in [27]. In addition, [17] employed the hierarchical clustering to merge the clusters generated by the K-means, and reduce the number of the clusters.

In addition to the method above, some new methods, such as spectral clustering

[38], and the iterative self-organizing data-analysis technique algorithm [39] have also been applied to the LCs clustering.

For the LCs clustering method above, each LC in the data set is treated as an individual time series, ignoring the inherent relationship between LCs, which restrain the performance of the clustering methods. The network is a powerful mechanism to characterize the time series data set that has been proved on the time series analysis [40]. This paper fills the research gap mentioned above by converting the LCs data set into a network and clustering the LCs via the community detection in network, achieving the improvement over the state-of-the-art method.

In this section, we give a detailed description of our method, which consists of 4 steps: data preparation, network construction, community detection, center extraction.

The normalization is an indispensable step in the LCs clustering, as it shields the amplitude interference and make the user consumption pattern contained in the LCs to be easily identified. In our work, for a given daily LC st, we obtained the normalized daily LC lt by the Equation 1.

The minimum total cost of the warping path cP(X,Y) is equal to the distance between the LCs X and Y. And the cp is obtained by the Equation 2.

3.2.2 The conversion of the LC data set into network

The network is a powerful mechanism, and is able to represent the complex relationship between the LCs. A network G(V,E) consist of n vertices V={v0,v1,...,vn−1} and m edges E={e(vi,vj)|vi,vj∈V}, where the e=(vi,vj) is an edge that connects vi and vj. In this work, we converted the LCs data set into a ε−nearest neighbor network (ε-NN). Firstly, we assigned each LC in the original data set as a vertex. Secondly, the edge between two vectors was formed when the distance between them less than ε in the Equation 3.

Here, the μd is the mean distance of the vector x and all of the other vectors, the λ is a parameter to adjust the number of the edge in the network. The higher of the λ is, the more edges the network contained and the more complex of the network is. In addition, the weight of the edge e∈E is determined by the Equation 4.

Here, Ai,j is the weight of the edge between vertex i and j, ki=∑Ai,l is the sum of the weights of the edges attached to i, and ci is the community which i is assigned to.

The center of a LC cluster is a TLP which reflects the electricity consumption pattern, and it usually obtained by an averaging method. However, when the DTW is used as the distance measure, the LCs averaging is a difficult task, because it has to be consistent with the ability of DTW to realign sequences over time [45]. In this paper, a averaging technology DTW Barycenter Averaging shown in Algorithm 2 is proposed by [45], and is applied to extract the TLPs from the clusters.

To verify the efficiency of the method, the clustering method are validated on the same data set in the same task.

It is significant for the clustering algorithm to select the indexes which reflect the performance of algorithms. According to the performance of each common cluster validity index on various data sets [46, 47], we selected the 5 cluster validity indices to evaluate the result of clustering: Davies-Bouldin index (DB) [48], VCN index (VCN, an improvement of Silhouette) [47], S_Dbw Index (S_Dbw) [49], Score function (SF) [50], and COP index (COP) [51]. In addition, the entropy, a common indexes to identify the demand response potential customers, is also considered to measure the consumer variability in our work [10]. The smaller DB, S_Dbw and COP are, the higher VCN and SF are, the higher cluster quality is.

The data that validate the clustering algorithm is provided by the Pecan Street Inc. [52]. It contains 22113 daily LCs from 351 households. The LCs are collected from the houses for the period of 63 days between July 6 2015 to September 6 2015, each of which is collected every 15 minutes. In order to obtain the baseline, the data set is also clustered by the state-of-the-art work (K-mediods & DTW) which is proposed in [10].

It is concluded that the lager γ is, the more prominent the improvement of the CICD in DB, VCN, S_Dbw, and SF are, compared with the K-mediods & DTW. The conclusion demonstrates that the CICD tend to cluster the LCs into less clusters. What’s more, the CICD have more lower average entropy of consumers in Figure 7

, which indicates that the CICD classifies the consumer into more stable representative groups according to the study of the

[10], which is important to predict individual energy consumption patterns and identify the potential options for the demand respond.

Ideally, the LCs should be assigned into less cluster, and the LCs in the same cluster are sufficient similar (that mean the variances within a cluster is small), which provide the better understand of the electricity consumption pattern. Actually, it is inevitable that the variances within cluster increase as the number of the cluster decreases, when we applied the clustering technology to cluster the LCs, due to the volatile and uncertain of the electricity consumption behaviors data [53]. In practice, the researcher usually make a tradeoff between cluster number and variances within a cluster according to the application requirement.

In this paper, we proposed a best cluster number determined approach to construct a multi-layers TLP directory. In each layer, the variance within the cluster is small when the number of the the TLPs is large, and the variance within the cluster is large when the number of the the TLPs is small. In all the layers, the variance within the cluster decrease when the number of the the TLPs increases. Thus, the researcher is allowed to assess LCs and the customer using an layer or the whole TLP directory according to the application requirement. In detail, we firstly change the γ of the Equation 6 to obtain different clustering results in CICD method and extract the TPLs. Secondly, for each clustering result, we calculate its cluster number and the VCN which has been proved that has a excellent performance in determining the optimal number of clusters [47]. Thirdly, we segment the cluster number into n intervals. For each interval [i,j), we select the TLPs, which correspond to max VCN, as a layer of the TLP directory.

This paper proposed an integrated approach to perform load curves (LC) clustering. First, we proposed a clustering approach incorporated with community detection to improve the performance of LC clustering, which includes network construction, community detection and typical load profile extraction. Second, we construct a multi-layer typical load profile (TLP) directory to make the trade-off between variances within a cluster and the number of the clusters. In terms of the metrics of five cluster validity indices(Davies-Bouldin index, VCN index, S_Dbw Index, Score function, and COP index), our method is validated to be effective, outperforming the state-of-the-art methods [10].

The smart grid network paradigm relies on the exploitation of smart meter data to improve customer experience, utility operations, and advance power management [19]. Our future work will focus on how to react to demand-response by analyzing the TLP and the customers. In addition, the external factors (such as customer activity information) will be considered to obtain the features of the customers behaviors behind the LCs.