Recently, in many systems such as speech recognition and visual processing, deep learning has been widely implemented. In this research, we are exploring the possibility of using deep learning in graph clustering. Graphs have gained growing traction in different fields, including social networks, information graphs, the recommender system, and also life sciences. In this paper, we propose a method of clustering the nodes of various graph datasets. We cluster different category datasets that belong to Affiliation networks, Animal networks, Human contact networks, Human social networks, Miscellaneous networks. The deep learning role in modeling the interaction between nodes in a network allows a revolution in the field of science relevant to graph network analysis. In this paper, we extend the gumbel softmax approach to graph network clustering. The experimental findings on specific graph datasets reveal that the new approach outperforms traditional clustering significantly, which strongly shows the efficacy of deep learning in graph clustering. We do a series of experiments on our graph clustering algorithm, using various datasets: Zachary karate club, Highland Tribe, Train bombing Italian Gangs, Jazz musicians, American Revolution, Dolphins, Zebra, Windsurfers, Les Misérables, Political books. 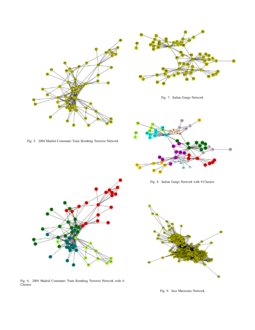 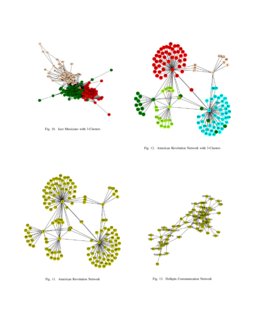 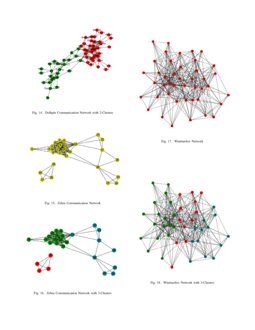 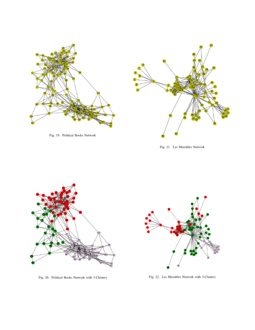 Deep learning has become a hot topic in machine learning and artificial intelligence fields. In specific tasks such as speech recognition, natural language processing, and image processing several algorithms, hypotheses, and large-scale training frameworks for deep learning have been developed and widely implemented. Nevertheless, the use of deep learning in clustering has not yet been thoroughly studied, to our knowledge. The goal of this research is to carry out some preliminary research along that path.

In this paper, we extend the Gumbel softmax approach that [1] uses to select and extract the features for the Graph neural network to clustering the graph datasets using deep learning based approach. We conduct a series of experiments using a variety of datasets such as Zachary karate club, Highland Tribe, Train bombing Italian Gangs, Jazz musicians, American Revolution, Dolphins, Zebra, Windsurfers, Les Misérables, Political Books. The result seems to be very impressive with high accuracy.

Deepak and Huaming [1] selected Graph Neural Network(GNN) features in the paper feature collection and extraction for Graph Neural Networks, with the citation network datasets. (1) They apply the feature selection algorithm to GNNs using Gumbel Softmax and conduct a series of tests using various comparison datasets: Cora, Pubmed, and Citeseer. (2) They develop a method for ranking the features picked. To show the usefulness of algorithms for both feature selection and ranking of features. Deepak and Huaming demo is an illustrative example for the Cora dataset, where they pick 225 features out of 1433 features and rank them according to prominent features. The proposed deep learning model works well with reduced features, which is around 80-85 percent decrease in the number of features that the dataset had initially. Results of the experiment reveal that the accuracy slowly decreases by using the selected features falling within range 1-50, 51-100, 100-150, and 151-200 for classification.

Using the Gumbel Softmax function and the method proposed, Deepak and Huaming select the features in a graph citation dataset. Gumbel-Softmax distribution is [5]

Let z be a categorical, random variable with probabilities of the form

π1,π2,⋯,πk. Julius [3] uses Gumbel-Max trick which provides an easy and efficient way to draw samples z from a categorical distribution with the stated class probabilities π:

Training a neural network by gradient descent requires the differentiation of each network operation. Remember that in Equation 1, where i=1,2,⋯,k, the argmax function and the stochastic sampling process gi are not differentiable. Next, an optimal solution for having argmax differentiable is to approximate it by a softmax function. One can also use a temperature of τ to control the argmax approximation standard as follows:

The method used in the experiment is defined as below:

In general, let An×n be the adjacency matrix where ’n’ represents the total number of nodes in the graph dataset. The size of the matrix WC is n×k, where k indicates the number of clusters. When we perform WtCAWC operation, we obtain a matrix of the size k×k and let us call this matrix as Rk×k. The resultant Rk×k matrix shows the strength of the cluster where the primary diagonal shows the strength of data points within cluster groups, and other elements of the matrix R provide details on the strength of data points between different cluster groups. Then, we apply softmax function on the obtained matrix R

to express our inputs as a discrete probability distribution. Mathematically, this is defined as follows:

The result obtained from the equation 5

Ik×k) where each diagonal element represents the cluster group.

Using the gumbel softmax function and the method proposed, we cluster the graph dataset nodes.

Zachary Karate Club(Fig 1 and Fig 2): The network data were collected from members of the University Karate Club by Wayne Zachary in 1977. Every node represents a member of the club, and an edge represents a link between the two members of the club. The network is undirected. The often-discussed problem of using this dataset is to find the two groups of people to whom the karate club splits after an argument between two teachers.

Highland Tribes(Fig 3 and Fig 4): The network is the Gahuku – Gama alliance system of the Eastern Central Highlands of New Guinea, signed social network of tribes from Kenneth Read (1954). The network comprises seventeen tribes connected by friendship (”Rova”) and enmity (”Hina”).

Train Bombing(Fig 5 and Fig 6): The network is undirected, as retrieved from newspapers, and includes communications between alleged terrorists involved in the Madrid train bombing on 11 March 2004. A node represents a terrorist, and an edge between two terrorists shows that the two terrorists had a connection. The weights on edge indicate how ’strong’ relation was. The relationship includes friendship and co-participating in training camps or previous attacks..

Italian Gangs(Fig 7 and Fig 8): The Network describes Italian gang members and their nationalities.

Jazz Musicians(Fig 9 and Fig 10): This is the collaboration network between Jazz musicians. Each node is a Jazz musician and an edge denotes that two musicians have played together in a band. The data was collected in 2003.

Affiliation networks are the networks denoting the membership of actors in groups.

American Revolution(Fig 11 and Fig 12): The network includes membership records of 136 people in 5 organizations from the pre-American Revolution era Figure. The graph contains well-known persons such as US activist Paul Revere. An edge between an individual and an agency suggests the individual was an organization member and is represented in the Figure 11.

Animal networks are networks of animal communications. They are the animal equivalent to human social networks.

Dolphins(Fig 13 and Fig 14): The network includes a Bottlenose Dolphin Social Network. The nodes are the bottlenose dolphins (genus Tursiops) of a group of bottlenose dolphins live off Doubtful Sound, a New Zealand fjord (spelled fiord in New Zealand). An edge suggests the interaction is regular. The dolphins were observed from 1994 through 2001.

Zebra(Fig 15 and Fig 16): The network involves networks of animals from the group that communicates to each other. They are the animal equivalent to human social networks. Note that website datasets such as Dogster are excluded here in the category of Social networks because humans generate the networks.

Human communication networks are real networks of interaction between people, i.e., talking to each other, spending time together, or at least being physically close. More often than not, by giving out RFID labels to individuals with chips that monitor whether other individuals are nearby, these datasets are collected..

Miscellaneous networks are any networks that do not fit into one of the other categories. Political Books(Fig 19 and Fig 20): The network is of books published around the time of the 2004 presidential election about US politics and distributed through online bookseller Amazon.com. Edges between books reflect repeated co-purchases by the same purchasers of books.

Les Misérables(Fig 21 and Fig 22): This undirected network includes character co-occurrences in the novel ’Les Misérables’ by Victor Hugo. A node represents a character, and an edge between two nodes suggests that these two characters existed in the book’s same chapter. The weight of each relation reveals how much this kind of co-appearance happened.

We introduced the clustering strategy for the Graph network datasets using deep learning based approach. The experimental findings demonstrate the effectiveness by choosing appropriate parameter values and evaluating the consistency of the resultant clustering. The method currently available is just as diverse as the graph clustering applications. The research completed, however, is on a dataset of unweighted and undirected graphs. We are currently experimenting with applying the principle of clustering for Graphs on a weighted and directed graph dataset.