Clustering as a means of leader selection in consensus networks

In the leader-follower approach, one or more agents are selected as leaders who do not change their states or have autonomous dynamics and can influence other agents, while the other agents, called followers, perform a simple protocol based on the states of their neighbors. This approach provides a natural link between control theory and networked agents with their input data. Despite the fact that the leader-follower approach is widely used, the fundamental question still remains: how to choose leaders from a set of agent. This question is called the problem of choosing leaders. There is still no selection algorithm that is both optimal under a natural criterion and fast. In this paper, for agents that obey a linear consensus protocol, we propose to choose leaders using graph nodes' clustering algorithms and show that this method is the most accurate among the fast existing algorithms of choosing leaders. 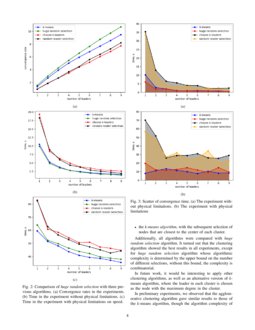 Data Clustering as an Emergent Consensus of Autonomous Agents

We present a data segmentation method based on a first-order density-ind...
Piotr Minakowski, et al. ∙

In many problems, agents cooperate locally so that a leader or fusion ce...
Stephen Kruzick, et al. ∙

A multi-agent system is a system formed by a number of interacting agents. Multi-agent systems can be used to solve problems that are difficult or impossible to solve with a single agent or a monolithic system. Examples of such tasks are emergency response [1], modeling of social structures [2], and many others.

Movement of several agents to a given control point while maintaining a relationship between their states is an important problem in robotics. For example, in applications, including spaceships, unmanned aerial vehicles (UAVs), and mobile robots, agents often need to move to a landmark or target point while maintaining the shape of their formation.

The leader-follower approach is one of the ways to solve this type of formation control problems [3].

Recently, several methods of solving the problems of choosing leaders in networked multi-agent systems have been studied, in particular, within the framework of linear consensus protocols. Some graph indices, such as node degree, have been tested in terms of leader performance [4]. The problem of choosing leaders can be solved either ascendingly (choosing one leader and adding other leaders until the set of leaders becomes optimal) [5], or descendingly: the optimal set of leaders is sought by excluding agents from the entire set of agents [6]. To control UAVs, an “online” leader change was applied in order to improve the rate of convergence of agents’ positions [7].

[9] and the k-means method, which seeks to minimize the total quadratic deviation of cluster points from the centers of these clusters [10].

In this paper, we consider the problem of choosing leaders in the case where they preserve their initial states, i.e., they are static. The problem of selecting mobile leaders was considered, for example, in [11].

The aim of the paper is to compare existing algorithms for choosing leaders with the method based on graph nodes’ clustering with respect to accuracy and convergence time in ideal and real conditions.

We will consider a multi-agent system with a corresponding connection graph G=(V,E). The graph G is directed and represents the system structure. We will identify the node vi, i=1,...,V, with the i-th agent. Agent i depends on agent j if there is a directed edge e=(vi,vj)∈E. Each edge e∈E has its weight w, thereby we have a weighted adjacency matrix A of the system [13].

Let matrix L be the Laplacian matrix [14] of the graph G with adjacency matrix A. Each agent i has its state xi. In this paper, xi denotes agent’s coordinate. The linear consensus protocol has the form

is the state vector of the system.

Leaders preserve their states, hence, LLL and LLF are zero, so that ˙xL is zero and xL is constant. Then, LFF is the grounded Laplacian of the system [15]. In this paper, LFF

is assumed to be symmetric. Thus, the followers influence each other equally. The convergence rate of the system can be asymptotically measured by the smallest eigenvalue of the grounded Laplacian

LFF [5], therefore, further in the paper we will identify these quantities.

Next, for simulation purposes, we define convergence time as follows:

Let x∗ be a limit state of the system. The system reaches x∗ with fixed error e in convergence time te, if

where ||y||2 is the Euclidean norm of vector y.

These six algorithms are:

Thus, it can be seen that the k-means algorithm has the smallest average asymptotic complexity among non-random algorithms.

Consider a multi-agent system containing 100 agents uniformly distributed in a 10×10 m2 square. Let two agents-followers be symmetrically connected if and only if the initial distance between them is no more than 3 m. The weights of these connections are chosen uniformly from the interval (0, 50]. The weighted adjacency matrix generated in this way does not change later.

In all experiments, we measured the convergence time (see Definition 1). Since agents had x and y coordinates, the total deviations along both axes from the limiting state were calculated, and when both of these deviations do not exceed the fixed error, we admit that the system reached the limit. Based on the obtained convergence times, we conclude that one algorithm is better than another. Additionly, we measure the convergence rates for all algorithms, which are identified with the smallest eigenvalues of the corresponding grounded Laplacian matrices LFF; the results are provided below.

Each experiment was repeated 30 to 100 times depending on the number of leaders k (from 1 to 90); the obtained convergence time was averaged for each k.

To bring the system closer to reality, physical limitations were imposed: these were the limits on the maximum speed. Simulation was performed in Webots, an open source robot simulator, which contains various robot models, including a model of e-puck2 robots. The e-puck2 model was used for simulation with physical constraints that the maximum speed is limited to

Experiments with physical limitations were carried out in Webots on C language, without these restrictions on Python. More details about the experiments carried out can be found in the Appendix.

For all experiments, the convergence error (see Definition 1) was set to be 5×10−8 cm. This error was chosen experimentally, as it allows to achieve fairly accurate results within a reasonable time.

The simulation time step for both experiments with physical limitations and without them was equal to 1 ms, which is the minimum available time step in Webots.

Iv-B Convergence time of the algorithms

In this section, we present the results on the convergence time depending on the number of leaders either with constraints on speed or without them.

First, we compare algorithms 1 to 5 because their complexities are much smaller than the complexity of huge random selection algorithm that is defined by constant number 10000. As Fig. 1 shows, k-means algorithm gives the best result and random leader selection, choose k-leader algorithm, and leaders with average degree give approximately similar results. Finally, leaders with max degree gives the worst result in the experiments with physical restrictions. However, the algorithm shows good results with a small number of leaders in the experiment without physical restrictions. These results should be investigated separately. Note that the difference between the algorithms is clearly seen in the experiments with physical limitations, however the convergence rate, which in this study is identified with the smallest eigenvalue of the grounded Laplacian, is the same in both experiments, therefore the convergence rate should not be the only decisive factor when choosing an algorithm.

Also the convergence time of experiments with physical limitations (see Fig. 0(b)) does not smoothly decrease with increasing number of leaders; this may indicate that more averaging is needed.

Second, we compare k-means, choose k-leader and random leader selection algorithms with huge random selection. We selected these algorithms because they gave the best or approximately similar results in the previous experiments and we do not compare all the algorithms so as not to clutter up the charts. As we can see in Fig. 1(a), huge random selection gives the best convergence rate and k-means’ result is quite close to it. Also we can see from the simulation that these two algorithms give the best results concerning the convergence time, though k-means algorithm is better in the experiments with physical restrictions. This is apparently related to the stop simulation criterion which depends on the convergence error (see Definition 1).

Finally, let us look at the scatter of the received data, which will give an understanding of the stability of the algorithm for real use. On Fig. 3, the difference between the maximum and the minimum convergence time is plotted along the time axis. It can be seen that the ranges of time for k-means and huge random selection algorithms are much smaller than those of choose k-leader and random leader selection algorithms; for the remaining algorithms the range is quite similar to the last two.

In this paper, we compared several algorithms for solving the leader selection problem with regard to the leader-follower consensus protocol for both systems with physical constraints and idealized ones. The following algorithms were compared:

In future work, it would be interesting to apply other clustering algorithms, as well as an alternative version of k-means algorithm, where the leader in each cluster is chosen as the node with the maximum degree in the cluster.

In this work, we did not consider systems with mobile leaders or dynamic connections, systems with acceleration, or systems with shape preserving. The problems of leader selection for them are in many respects similar to the simplest problems studied in this paper, however, of course, they are more complicated both theoretically and experimentally. In a further development of this work, such problems can be analyzed by applying clustering algorithms.

Simulation on Python and Webots consisted of 5 main steps:

The first four steps were the same for both types of the experiments and were implemented on Python.

After the generation of the coordinates and the Laplacian matrix the simulation started in a huge cycle, which can contain a maximum of N iterations; in our experiments, N=2×106.

Firstly the final limit state x∗ was calculated simply as e−LNtsx(0), so if the system did not reach this limit state in N steps or less, new coordinates and the corresponding Laplacian matrix were generated and simulation started again.

On each step of the simulation on Python, agents’ coordinates were updated as:

where ts is a simulation time step and equals to 1 ms in our experiments. After this update, the distance between the current state and the limit state was calculated according to Definition 1 and compared with the fixed error. If this distance was less than the fixed error, the simulation stoped, otherwise the new iteration began.

Simulation on Webots was similar to the one on Python with the difference that before the each simulation step ts, agents updated their new speeds as ˙x=min(−Lx,15.4 cm/s), with 15.4 cm/s being the maximum speed. Webots updates the speed with the last speed, acceleration and motor torque taken into account. After a simulation time step, a predeterminated agent (“inspector”) obtained the other agents’ coordinates, calculated the distance from the limit state, compared it with the fixed error and decided if simulation required continuation. If so, the inspector recalculated the speeds of all agents, sent them back, and simulation step repeated again.

Due to the way of the simulation and the implementation, no time was wasted on exchanging information, this time must be taken into account when implementing the algorithm on real robots.