In the Cluster Deletion problem the input is a graph G and an integer k, and the goal is to decide whether there is a set of at most k edges whose removal from G results a graph in which every connected component is a clique. In this paper we give an algorithm for Cluster Deletion whose running time is O^*(1.404^k). 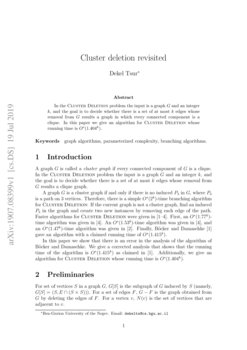 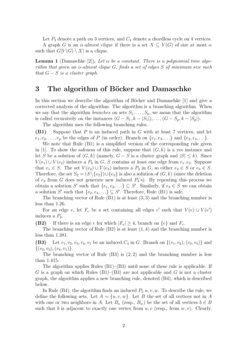 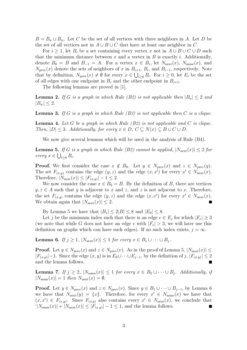 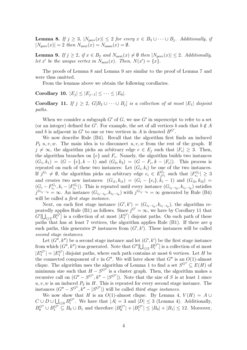 A graph G is called a cluster graph if every connected component of G is a clique. In the Cluster Deletion problem the input is a graph G and an integer k, and the goal is to decide whether there is a set of at most k edges whose removal from G results a clique graph.

Let P3 denote a path on 3 vertices, and C4 denote a chordless cycle on 4 vertices.

A graph G is an α-almost clique if there is a set X⊆V(G) of size at most α such that G[V(G)∖X] is a clique.

Let α be a constant. There is a polynomial time algorithm that given an α-almost clique G, finds a set of edges S of minimum size such that G−S is a cluster graph.

3 The algorithm of Böcker and Damaschke

The branching vector of Rule (B1) is at least

For i≥1, let Bi be a set containing every vertex x not in A∪B∪C∪D such that the minimum distance between x and a vertex in B is exactly i. Additionally, denote B0=B and B−1=A. For a vertex x∈Bi, let Nnext(x), Nsame(x), and Nprev(x) denote the sets of neighbors of x in Bi+1, Bi, and Bi−1, respectively. Note that by definition, Nprev(x)≠∅ for every x∈⋃i≥0Bi. For i≥0, let Ei be the set of all edges with one endpoint in Bi and the other endpoint in Bi+1.

The following lemmas are proved in [1].

If G is a graph in which Rule (B3) is not applicable then C is a clique.

We now give several lemmas which will be used in the analysis of Rule (B3).

Let j be the minimum index such that there is an edge e∈Ej for which |Fe|≥3 (we note that while G does not have an edge e with |Fe|>3, we will later use this definition on graphs which can have such edges). If no such index exists, j=∞.

The proofs of Lemma 8 and Lemma 9 are similar to the proof of Lemma 7 and were thus omitted.

From the lemmas above we obtain the following corollaries.

When we consider a subgraph G′ of G, we use G′ in superscript to refer to a set (or an integer) defined for G′. For example, the set of all vertices b such that b∉A and b is adjacent in G′ to one or two vertices in A is denoted BG′.

We now describe Rule (B3). Recall that the algorithm first finds an induced P3 u,v,w. The main idea is to disconnect u,v,w from the rest of the graph. If j≠∞, the algorithm picks an arbitrary edge e∈Ej such that |Fe|≥3. Then, the algorithm branches on {e} and Fe. Namely, the algorithm builds two instances (G1,k1)=(G−{e},k−1) and (G2,k2)=(G−Fe,k−|Fe|). This process is repeated on each of these two instances: Let (Gi,ki) be one of the two instances. If jGi≠∅, the algorithm picks an arbitrary edge ei∈EGijGi such that |FGiei|≥3 and creates two new instances: (Gi1,ki1)=(Gi−{ei},ki−1) and (Gi2,ki2)=(Gi−FGiei,ki−|FGiei|). This is repeated until every instance (Gi1⋯ip,ki1⋯ip) satisfies jGi1⋯ip=∞. An instance (Gi1⋯ip,ki1⋯ip) with jGi1⋯ip=∞ generated by Rule (B3) will be called a first stage instance.

Next, on each first stage instance (G′,k′)=(Gi1⋯ip,ki1⋯ip), the algorithm repeatedly applies Rule (B3) as follows. Since jG′=∞, we have by Corollary 11 that G′[⋃i≥2BG′i] is a collection of at most |EG′1| disjoint paths. On each path of these paths that has at least 7 vertices, the algorithm applies Rule (B3). If there are q such paths, this generates 2q instances from (G′,k′). These instances will be called second stage instances.

For a general value of |Ej|, we have that in the worst case Rule (B3) generates 2|Ej| third stage instances (as discussed above, we can assume that Rule (B3) was not applied on the first stage instances). The branching vector is at least R(|Ej|), where R(p) is a vector of length 2p in which the value p+1+2i appears (pi) times, for i=0,…,p. We note that this bound is not good enough for our purpose. Even for |Ej|=5, we have that the branching vector R(5) has branching number of approximately 1.406 and we need a branching number less than 1.404. The solution is to give better bounds on the sizes of the sets SG′′. This will be discussed below.

We now consider the case j=0. To handle this case (and to get a better bound on the branching number for the case j≥1), we use a Python script. The script goes over possible cases for the graph G[A∪B∪B1∪B2] and for each case it computes a branching vector that gives an upper bound on the branching number for this case. Formally, a configuration graph is a graph J whose vertices are partitioned into 4 sets: (1) A set AJ that contains 3 vertices u′,v′,w′ which form a P3. (2) A set BJ that contains vertices that are adjacent to 1 or 2 vertices of AJ. (3) A set BJ1 that contains vertices that are adjacent to at least one vertex in BJ and are not adjacent to vertices in AJ. (4) A set BJ2 such that every vertex in BJ2 has exactly one neighbor and this neighbor is in BJ1. Additionally, |FJe|≤3 for every edge e with at least one endpoint in AJ∪BJ. We note that the restriction on the degree of the vertices in BJ2 is required in order to restrict the number of configuration graphs.

For each configuration graph J the script generates a branching vector R as follows. Suppose that G is a graph that matches J. The script generates graphs of the form Ji1⋯ip like the generation of first stage instances in Rule (B3), except that now the process ends when jJi1⋯ip>0. A graph Ji1⋯ip with jJi1⋯ip>0 generated by the script will be called a first stage configuration graph. Consider some first stage configuration graph J′=Ji1⋯ip. This graph corresponds to the instance (G′,k′)=(Gi1⋯ip,ki1⋯ip) that Rule (B3) generates when it is applied on the graph G and the induced path u,v,w. Note that if jJ′≠∞ then (G′,k′) is not a first stage instance and Rule (B3) will continue generating instances from (G′,k′). By the analysis of the case j≥1 above, at the worst case, the number of first stage instances generated from (G′,k′) is 2|EG′1|=2|EJ′1|. The vector R(|EJ′1|) gives a lower bound on the differences between the parameter ki1⋯ip and the parameters of these 2|EG′1| instances. Therefore, the vector R can be the concatenation of R(|EJi1⋯ip1|) for every first stage graph Ji1⋯ip. We can get a better branching vector by giving a better bound on |SG′′| for the graphs G′′ of the second stage instances (G′′,k′′) that are generated by Rule (B3) from an instance (G′,k′)=(Gi1⋯ip,ki1⋯ip), where G′ matches the first stage configuration graph J′=Ji1⋯ip. For our purpose, we it was suffices to give a simple bound based on the edges between AJ′ and BJ′. For example, suppose that there are vertices b′1,b′2∈BJ′ such that N(b′1)∩AJ′={u′} and N(b′2)∩AJ′={w′}. Then, in G there are vertices b1,b2∈B such that N(b1)∩A={u} and N(b2)∩A={w}. The edges (b1,u) and (b2,w) remain in every graph G′′ of a second stage instance (G′′,k′′) generated from (G′,k′). Therefore, each such graph contains two edge disjoint induced P3s (b1,u,v and b2,w,v). Therefore, |SG′′|≥2. We use similar lower bounds in case of other edges between AJ′ and BJ′.