Negative affect is a proxy for mental health in adults. By being able to predict participants' negative affect states unobtrusively, researchers and clinicians will be better positioned to deliver targeted, just-in-time mental health interventions via mobile applications. This work attempts to personalize the passive recognition of negative affect states via group-based modeling of user behavior patterns captured from mobility, communication, and activity patterns. Results show that group models outperform generalized models in a dataset based on two weeks of users' daily lives. 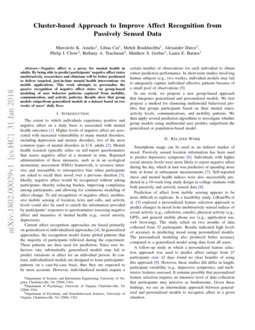 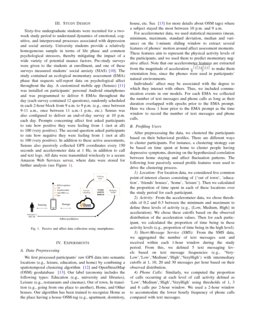 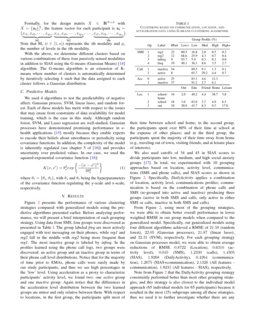 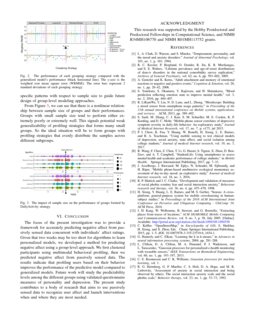 . Mental health research typically relies on self-report questionnaires that assess negative affect at a moment in time. Repeated administration of these measures, such as in an ecological momentary assessment (EMA) framework, is resource intensive and susceptible to retrospective bias when participants are asked to recall their mood over a previous duration

Current affect recognition approaches are based primarily on generalized or individualized approaches [4]. In generalized approaches, the recognition model learns global patterns that the majority of participants followed during the experiment. These patterns are then used for prediction. Since user behaviors vary substantially, generalized models may fail to predict variations in affect for an individual person. In contrast, individualized models are designed to learn participants’ patterns on a case-by-case basis, thus they are expected to be more accurate. However, individualized models require a certain number of observations for each individual to obtain robust prediction performance. In short-term studies involving human subjects (e.g., two weeks), individual models may fail to adequately capture individual affective patterns because of a small pool of observations [5].

In our work, we propose a new group-based approach that integrates generalized and personalized models. We first propose a method for clustering multimodal behavioral profiles that groups participants based on their mental states, activity levels, communications, and mobility patterns. We then apply several prediction algorithms to investigate whether group models using multimodal user profiles outperform the generalized or population-based model.

Smartphone usage can be used as an indirect marker of mood. Passively sensed location information has been used to predict depressive symptoms [6]. Individuals with higher social anxiety levels were more likely to report negative affect during the day, which in turn was predictive of spending more time at home at subsequent measurements [7]. Self-reported stress and mental health indices were also successfully predicted in a 10-week long study design in college students with both passively and actively sensed data [8].

Prediction of affect from mobile sensing appears to be more difficult to replicate. In a feasibility study, LiKamWa et al. [5]

A follow-up study in which a personalized feature selection approach was used to predict affect ratings from 27 participants over 42 days found no clear benefits of using this approach [9]. However, these studies did differ in length, participant variability (e.g., depressive symptoms), and unobtrusive features assessed. It remains possible that personalized feature selection requires an intensive level of data collection that participants may perceive as burdensome. Given these findings, we use an intermediate approach between generalized and personalized models to recognize affect in a given situation.

Sixty-five undergraduate students were recruited for a two-week study period to understand dynamics of emotional, cognitive, and interpersonal processes associated with depression and social anxiety. University students provide a relatively homogeneous sample in terms of life phase and common psychological stressors, thereby mitigating the impact of a wide variety of potential nuance factors. Pre-study surveys were given to the students at enrollment, and one of these surveys measured students’ social anxiety (SIAS) [10]. The study contained an ecological momentary assessment (EMA) phase that requests self-report data on psychological affect throughout the day. A customized mobile app (Sensus) [11] was installed on participants’ personal Android smartphones and was programmed to deliver 6 EMAs throughout the day (each survey contained 12 questions), randomly scheduled in each 2-hour block from 9 a.m. to 9 p.m. (e.g., once between 9-11 a.m., once between 11 a.m.-1 p.m., etc.). Sensus was also configured to deliver an end-of-day survey at 10 p.m. each day. Prompts concerning affect first asked participants to rate how positive they were feeling from 1 (not at all) to 100 (very positive). The second question asked participants to rate how negative they were feeling from 1 (not at all) to 100 (very positive). In addition to these active assessments, Sensus also passively collected GPS coordinates every 150 seconds and accelerometer data at 1 Hz, in addition to call and text logs. All data were transmitted wirelessly to a secure Amazon Web Services server, where data were stored for further analysis (see Figure 1).

We first processed participants’ raw GPS data into semantic locations (e.g., leisure, education, and home) by combining a spatiotemporal clustering algorithm  [12] and OpenStreetMap (OSM) geodatabase  [13]. Our label taxonomy includes the following types: Education (e.g., university and libraries), Leisure (e.g., restaurants and cinemas), Out of town, In transition (e.g., going from one place to another), Home, and Other houses. Our algorithm has been trained to recognize Home as the place having a house OSM-tag (e.g., apartment, dormitory, house, etc. See  [13] for more details about OSM tags) where a subject stayed the most between 10 p.m. and 9 a.m.

For accelerometer data, we used statistical measures (mean, minimum, maximum, standard deviation, median and variance) on the 1-minute sliding window to extract several features of phones’ motion around affect assessment moments. These features aim to represent the physical activity levels of the participants, and we used them to predict momentary negative affect. Note that our accelerometer features are extracted from the magnitude of acceleration

√x2+y2+z23 to make them orientation free, since the phones were used in participants’ natural environments.

After preprocessing the data, we clustered the participants based on their behavioral profiles. There are different ways to cluster participants. For instance, a clustering strategy can be based on time spent at home to cluster people having depressive symptoms, drawing on the hypothesized correlation between home staying and affect fluctuation patterns. The following four passively sensed profile features were used to drive the clustering process.

For location data, we considered five common point-of-interest classes consisting of {‘out of town’, ‘education’, ‘friends’ houses’, ‘home’, ‘leisure’}. Then we calculated the proportion of time spent in each of these locations over the study period for each participant.

From the accelerometer data, we chose thresholds of 0.2 and 0.3 between the minimum and maximum to define three levels of activity (e.g., {Low, Medium, High} in acceleration). We chose these cutoffs based on the observed distribution of the acceleration values. Then for each participant, we calculated the proportion of time being in these activity levels (e.g., proportion of time being in the high level).

From the SMS data, we aggregated the number of text messages sent and received within each 1-hour window during the study period. From this, we defined 5 text messaging levels based on text message frequencies (e.g., ‘VeryLow’,‘Low’,‘Medium’,‘High’,‘VeryHigh’) with intermediary cutoffs at 1, 10, 20 and 30 messages per hour based on their observed distribution.

Similarly, we computed the proportion of calls occurring at each level of call activity defined as ‘Low’,‘Medium’,‘High’,‘VeryHigh’ using thresholds of 1, 3 and 6 calls per 2-hour window. We used a 2-hour window to accommodate the lower hourly frequency of phone calls compared with text messages.

, the feature vector for each participant is

With the above, we determine different clusters based on various combinations of these four passively sensed modalities in addition to SIAS using the G-means (Gaussian Means) [14]

algorithm. The G-means algorithm is an extension of K-means where number of clusters is automatically determined by iteratively selecting

such that the data assigned to each cluster follows a Gaussian distribution.

We used 4 algorithms to test the predictability of negative affect: Gaussian process, SVM, linear lasso, and random forest. Each of these models has merit with respect to the issues that may ensue from constraints of data availability for model training, which is the case in this study. Although random forest, SVM, and Lasso regression are well-studied, Gaussian processes have demonstrated promising performance in e-health applications

[15] mostly because they enable experts to encode their beliefs about smoothness or periodicity using covariance functions. In addition, the complexity of the model is inherently regulated (see chapter 5 of [16]) and provides uncertainty over predicted values. In our case, we used the squared-exponential covariance function [16]:

being the hyperparameters of the covariance function regulating the y-scale and x-scale, respectively.

Figure 2 presents the performance of various clustering strategies compared with generalized models using the predictive algorithms presented earlier. Before analyzing performance, we will present a brief interpretation of each grouping strategy. Using data from SMS, four groups were discovered as presented in Table I. The group labeled freq are most actively engaged with text messaging on their phones, while reg1 and reg2 fall in the middle with reg2 being more frequent than reg1. The most inactive group is labeled by infreq. In the profiles learned using the phone call logs, two groups were discovered: an active group and an inactive group in terms of their phone call level distributions. Notice that for the majority of time prior to EMAs, phone calls were rarely made by our study participants, and thus we see high percentages in the ‘low’ level. Using acceleration as a proxy to characterize participants’ activity level, we found two: one active group and one inactive group. Again notice that the differences in the acceleration level distribution between the two learned groups are minor and only relative between them. With respect to locations, in the first group, the participants split most of their time between school and home; in the second group, the participants spent over 80% of their time at school at the expense of other places; and in the third group, the participants spent the majority of their time away from home (e.g., traveling out of town, visiting friends, and at leisure place of interests).

We also used cutoffs of 34 and 43 in SIAS scores to divide participants into low, medium, and high social anxiety groups [17]. In total, we experimented with 10 grouping approaches based on location, activity level, communications (SMS and phone calls), and SIAS scores as shown in Figure 2. Specifically, DailyActivity applies a combination of location, activity level, communications profiles; communication is based on the combination of phone calls and SMS (re-grouped into active and inactive) producing three groups (active in both SMS and calls, only active in either SMS or calls, inactive in both SMS and calls).

Note from Figure 2 that the DailyActivity grouping strategy consistently performed better than most other grouping strategies, and this strategy is also closest to the individual model approach (65 individual models for 65 participants) because it resulted in the most (25) subgroups among all these strategies, thus we used it to further investigate whether there are any specific patterns with respect to sample size to guide future design of group-level modeling approaches.

From Figure 3, we can see that there is a nonlinear relationship between sample size of groups and their performances. Groups with small sample size tend to perform either extremely poorly or extremely well. This signals potential weak generalizability of profiling strategies that forms many small groups. So the ideal situation will be to form groups with profiling strategies that evenly distribute the samples across different subgroups.

The focus of the present investigation was to provide a framework for accurately predicting negative affect from passively sensed data concurrent with individuals’ affect ratings. Given that two weeks may be too short for algorithms to learn personalized models, we developed a method for predicting negative affect using a group-level approach. We first clustered participants using multimodal behavioral profiling, then we predicted negative affect from passively sensed data. The results indicate that profiling users based on their behavior improves the performance of the predictive model compared to generalized models. Future work will study the predictability levels among the different groups using validated questionnaire measures of personality and depression. The present study contributes to a body of research that aims to use passively sensed data to recognize user affect and launch interventions when and where they are most needed.

This research was supported by the Hobby Postdoctoral and Predoctoral Fellowships in Computational Science, and NIMH R34MH106770 and NIMH R01MH113752 grants.