Clickbait detection in tweets remains an elusive challenge. In this paper, we describe the solution for the Zingel Clickbait Detector at the Clickbait Challenge 2017, which is capable of evaluating each tweet's level of click baiting. We first reformat the regression problem as a multi-classification problem, based on the annotation scheme. To perform multi-classification, we apply a token-level, self-attentive mechanism on the hidden states of bi-directional Gated Recurrent Units (biGRU), which enables the model to generate tweets' task-specific vector representations by attending to important tokens. The self-attentive neural network can be trained end-to-end, without involving any manual feature engineering. Our detector ranked first in the final evaluation of Clickbait Challenge 2017. 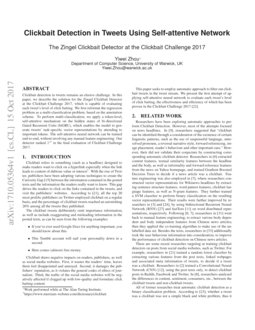 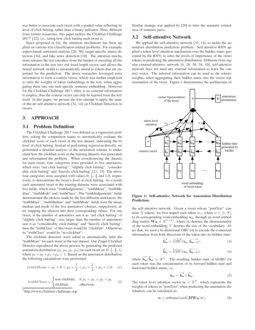 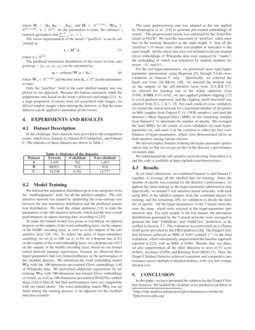 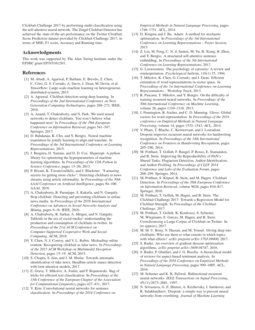 Clickbait refers to something (such as a headline) designed to make readers want to click on a hyperlink especially when the link leads to content of dubious value or interest111https://www.merriam-webster.com/dictionary/clickbait. With the rise of Twitter, publishers have been adopting various techniques to create the Curiosity Gap [15] between the information contained in the posted texts and the information the readers really want to know. This gap drives the readers to click on the links contained in the tweets, and visit the publishers’ websites. According to [21], all the top 20 most prolific publishers on Twitter employed clickbait on a regular basis, and the percentage of clickbait tweets reached an astonishing 26% among all the tweets they published.

The clickbait tweets deliberately omit importance information, as well as include exaggerating and misleading information in the posted texts, as can be seen from the following examples:

Clickbait draws negative impacts on readers, publishers, as well as social media websites. First, it wastes the readers’ time, leaves them feel disappointed and annoyed. Second, it damages the publishers’ reputation, as it violates the general codes of ethics of journalism. Third, the traffic of the social media websites will be negatively affected if clogged up with low-quality and formulaic click baiting content.

This paper seeks to employ automatic approach to filter out clickbait tweets in the tweet stream. We present the first attempt of applying self-attentive neural network to evaluate each tweet’s level of click baiting, the effectiveness and efficiency of which has been proven in the Clickbait Challenge 2017 [22].

Researchers have been exploring automatic approaches to perform Clickbait Detection. However, most of the attempts focused on news headlines. In [9], researchers suggested that “clickbait can be identified through a consideration of the existence of certain linguistic patterns, such as the use of suspenseful language, unresolved pronouns, a reversal narrative style, forward referencing, image placement, reader’s behaviour and other important cues.” However, their did not validate their conjecture by constructing corresponding automatic clickbait detector. Researchers in [6]

extracted content features, textual similarity features between the headline and the body, as well as informality and forward reference features from the news on Yahoo homepage, and trained Gradient Boosted Decision Trees to decide if a news article was a clickbait. Feature engineering was also employed in

[6, 7], researchers in [31] went back to manual feature engineering, to extract various body dependent and body independent features from Chinese news articles; then they applied the co-training algorithm to make use of the unlabelled data set. Besides the texts, researchers in [33] additionally took the user behaviour information into consideration, to improve the performance of clickbait detection on Chinese news articles.

There are some recent researches targeting at training clickbait detectors on posts from social media websites, such as Twitter. For example, researchers in [21]

trained a random forest classifier by extracting various features from the post texts, linked webpages and associated meta information of tweets, to decide if a tweet was a clickbait. Researchers in

All of former researches treat automatic clickbait detection as a binary classification problem. According to [23], whether a tweet was a clickbait was not a simple black and white problem, thus it was better to associate each tweet with a graded value reflecting its level of click baiting, rather than a binary indicator. Thus, different from former researches, this paper tackles the Clickbait Challenge 2017222http://www.clickbait-challenge.org/ [22], i.e., rating how click baiting each tweet is.

, the attention mechanism has been applied on various text classification-related problems. For example, aspect-based sentiment analysis

[26, 30], target-specific stance detection [34], and fake news detection [10]. The attention mechanism releases the text encoders from the burden of encoding all the information in the text into one fixed length vector, and allows the neural network model to automatically attend to tokens that are important for the prediction. The above researches leveraged extra information to form a context vector, which was further employed to infer the weights of token embeddings in the text, when aggregating them into one task-specific sentence embedding. However, for the Clickbait Challenge 2017, there is no external information to employ, thus the context vector can only be learned from the text itself. In this paper, we present the first attempt to apply the state-of-the-art self-attentive network [32, 14] on Clickbait Detection in tweets.

The Clickbait Challenge 2017 was defined as a regression problem, asking the competition teams to automatically evaluate the clickbait score of each tweet in the test dataset, indicating the its level of click baiting. Instead of performing regression directly, we performed a detailed analysis of the annotation scheme to understand how the clickbait score in the training datasets was generated, and reformatted the problem. When crowdsourcing the dataset, for each tweet, four categories were provided to five annotators, which were “not click baiting”, “slightly click baiting”, “considerably click baiting” and “heavily click baiting” [21, 23]. The above four categories were assigned with values 0, 13, 23 and 1.0, respectively, to demonstrate the tweet’s level of click baiting. As a result, each annotated tweet in the training datasets were associated with five fields, which were “truthJudgements”, “truthMean”, “truthMedian”, “truthMode” and “truthClass”. The “truthJudgements” fields demonstrated the choices made by the five different annotators; the “truthMean”, “truthMedian” and “truthMode” fields were the mean, median and mode of the five annotators’ choices, respectively, after mapping the choices into their corresponding values. For one tweet, if the number of annotators saw it as “not click baiting” or “slightly click baiting”, was larger than the number of annotators saw it as “considerably click baiting” and “heavily click baiting”, then the “truthClass” of this tweet would be “clickbait”. Otherwise, its “truthClass” would be “no-clickbait”.

Similar strategy was applied by [29] to infer the semantic relatedness of sentence pairs.

Figure 1 demonstrates the architecture of the self-attentive network. Given a tweet whose “postText” contains N tokens, we first maped each token wn, where n∈[1,N], to its corresponding word embedding xn, through an word embedding matrix WE∈RV×d0, where d0 denotes the dimensionality of the word embedding, V denotes the size of the vocabulary. After that, we used a bi-directional GRU [4] to encode the contextual information from both directions of the token into its hidden state:

The token level attention vector α∈RN, which represents the weights of tokens in “postText” when predicting the annotation distribution, can be calculated as:

The vector representation of the tweet’s “postText” s can be calculated as:

The predicted annotation distribution of this tweet on four categories p=[p1,p2,p3,p4] can be calculated as:

where Ws∈R4×2d1 and the bias term bs∈R4 are the parameters to train.

Only the “postText” field of the each labelled sample was employed in our approach. Because the human annotators made the judgements only based on the tweet’s plain text and image [21]. As a large proportion of tweets were not associated with images, we did not employ images when training the detector, so that the same detector can be applied to annotated all the tweets.

In this challenge, three datasets were provided to the competition teams, which were Dataset A, Dataset B (Unlabelled), and Dataset C. The statistics of these datasets are shown in Table 1.

The same preprocessing step was adopted as the one applied by Pennington et al. [18] to generate pre-trained embeddings of tweets333https://nlp.stanford.edu/projects/glove/preprocess-twitter.rb. The preprocessed tweets was tokenised by the TweetTokenizer in NLTK444http://www.nltk.org/. We used the maximum of “postText” token numbers in the training dataset(s) as the input length N

, thus all the “postText”s of tweets were either zero-padded or truncated to the same length. All the tokens that were not included in the pre-trained Glove embeddings of Wikipedia data were replaced by “

. For each round of cross-validation, we trained the neural network for a maximum number of 20 epochs on 80% samples from Dataset C (

≈ 15630 samples); and used the detector’s Mean Squared Error (MSE) on the remaining samples from Dataset C to determine the number of epochs. We averaged the least MSEs for all rounds of cross-validation for each hyper-parameter set, and used it as the criterion to select the best combination of hyper-parameters, which were demonstrated above as bold numbers among various choices.

We did not employ Dataset A during the hyper-parameter optimisation step, so that we can get an idea of the detector’s performance on unseen data.

[1], and the code is available at https://github.com/zhouyiwei/cc.

In our final submission, we combined Dataset A and Dataset C together, to leverage all the labelled data for training. Since the number of epochs was essential for the detector’s performance, we applied the same strategy as the hyper-parameter optimisation step. Specifically, we trained 5 self-attentive neural networks, with each using 80% of the labelled samples from the combined dataset for training, and the remaining 20% for validation to decide the number of epochs. All the hyper-parameters of the 5 neural networks were the same, which were selected in the hyper-parameter optimisation step. For each sample in the test dataset, the annotation distributions generated by the 5 neural networks were averaged to generate the final “truthMean” and “truthClass” prediction, as described in Section 3.1. The evaluation was performed on a Ubuntu 16.04 server provided by the TIRA platform [20]. The Zingel Clickbait Detector achieved an MSE of 0.033 (ranked 1st) in the final evaluation, which substantially outperformed the baseline approach reported in [22]

, with an MSE of 0.044. Besides that, our detector also outperformed all the other detectors in term of F1 score (0.683), Accuracy (0.856) and Running Time (00:03:27). Thus, the Zingel Clickbait Detector achieved consistent and competitive performance across multiple evaluation metrics, with very low computational cost.

This work was supported by The Alan Turing Institute under the EPSRC grant EP/N510129/1.