Click-through rate (CTR) prediction is a critical task in online advertising systems. Models like Deep Neural Networks (DNNs) are simple but stateless. They consider each target ad independently and cannot directly extract useful information contained in users' historical ad impressions and clicks. In contrast, models like Recurrent Neural Networks (RNNs) are stateful but complex. They model temporal dependency between users' sequential behaviors and can achieve improved prediction performance than DNNs. However, both the offline training and online prediction process of RNNs are much more complex and time-consuming. In this paper, we propose Memory Augmented DNN (MA-DNN) for practical CTR prediction services. In particular, we create two external memory vectors for each user, memorizing high-level abstractions of what a user possibly likes and dislikes. The proposed MA-DNN achieves a good compromise between DNN and RNN. It is as simple as DNN, but has certain ability to exploit useful information contained in users' historical behaviors as RNN. Both offline and online experiments demonstrate the effectiveness of MA-DNN for practical CTR prediction services. Actually, the memory component can be augmented to other models as well (e.g., the Wide&Deep model). 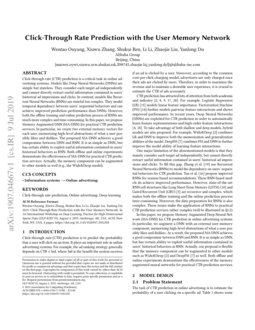 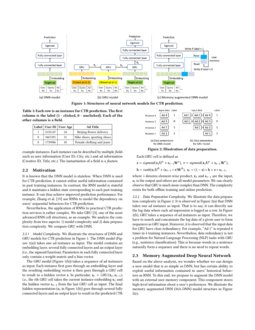 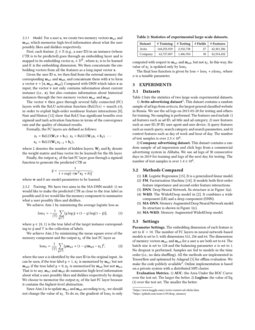 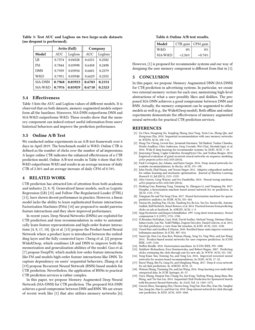 Click-through rate (CTR) prediction is to predict the probability that a user will click on an item. It plays an important role in online advertising systems. For example, the ad ranking strategy generally depends on CTR

bid, where bid is the benefit the system receives if an ad is clicked by a user. Moreover, according to the common cost-per-click charging model, advertisers are only charged once their ads are clicked by users. Therefore, in order to maximize the revenue and to maintain a desirable user experience, it is crucial to estimate the CTR of ads accurately.

(Chung et al., 2014) are recursive and complex, which makes both the offline training and the online prediction process time-consuming. Moreover, the data preparation for RNNs is also complex. These issues make the application of RNNs to practical CTR prediction services rather complex (will be illustrated in §2.2).

In this paper, we propose Memory Augmented Deep Neural Network (MA-DNN) for CTR prediction in online advertising systems. In particular, we augment a DNN with an external user memory component, memorizing high-level abstractions of what a user possibly likes and dislikes. As a result, the proposed MA-DNN achieves a good compromise between DNN and RNN. It is as simple as DNN, but has certain ability to exploit useful information contained in users’ historical behaviors as RNN. Actually, our proposal is flexible that the memory component can be augmented to other models such as Wide&Deep (Cheng et al., 2016) and DeepFM (Guo et al., 2017) as well. Both offline and online experiments demonstrate the effectiveness of the memory augmented neural networks for practical CTR prediction services.

The task of CTR prediction in online advertising is to estimate the probability of a user clicking on a specific ad. Table 1 shows some example instances. Each instance can be described by multiple fields such as user information (User ID, City, etc.) and ad information (Creative ID, Title, etc.). The instantiation of a field is a feature.

It is known that the DNN model is stateless. When DNN is used for CTR prediction, it cannot utilize useful information contained in past training instances. In contrast, the RNN model is stateful and it maintains a hidden state corresponding to each past training instance. It can thus achieve improved prediction performance. For example, Zhang et al. (Zhang et al., 2014) use RNNs to model the dependency on users’ sequential behaviors for CTR prediction.

Nevertheless, the application of RNNs to practical CTR prediction services is rather complex. We take GRU (Chung et al., 2014), one of the most advanced RNN cell structures, as an example. We analyze the complexity from two aspects: 1) model complexity and 2) data preparation complexity. We compare GRU with DNN.

We illustrate the structures of DNN and GRU models for CTR prediction in Figure 1. The DNN model (Figure 1

from the last GRU cell as input. The final hidden representation (

s3 in Figure 1(b)) goes through several fully connected layers and an output layer to result in the predicted CTR.

Each GRU cell is defined as

where ∘ denotes element-wise product, xt and st−1 are the input, st is the output and others are all model parameters. We can clearly observe that GRU is much more complex than DNN. The complexity exists for both offline training and online prediction.

We illustrate the data preparation complexity in Figure 2. It is observed in Figure 2(a) that DNN takes one ad instance as input. That is to say, it can directly use the log data where each ad impression is logged as a row. In Figure 2

(b), GRU takes a sequence of ad instances as input. Therefore, we have to search and concatenate the log data of a given user to form sequences as GRU input. Moreover, it is observed that the input data for GRU have clear redundancy. For example, “Ad 1” is repeated 4 times in 4 training instances. Nevertheless, data redundancy is not a problem for Natural Language Processing (NLP) tasks with GRU (e.g., sentence classification). This is because words in a sentence naturally form a sequence and there is no need to repeat words.

Based on the above analysis, we wonder whether we can design a new model that is as simple as DNN, but has certain ability to exploit useful information contained in users’ historical behaviors as RNN. To this end, we propose to augment the DNN model with an external user memory component. This component stores high-level information about a user’s preferences. We illustrate the memory augmented DNN (MA-DNN) model structure in Figure 2(c).

For a user u, we create two memory vectors mu1 and mu0, which memorize high-level information about what the user possibly likes and dislikes respectively.

First, each feature fi∈R (e.g., a user ID) in an instance (whose CTR is to be predicted) goes through an embedding layer and is mapped to its embedding vector ei∈RK, where ei is to be learned and K is the embedding dimension. We then concatenate the embedding vectors from all the features as a long input vector x.

Given the user ID u, we then find from the external memory the corresponding mu1 and mu0, and concatenate them with x to form a vector v=[x,mu1,mu0]. Compared with DNN which takes x as input, the vector v not only contains information about current instance (i.e., x), but also contains information about historical instances through the two memory vectors mu1 and mu0.

ReLU(x)=max(0,x)), in order to exploit high-order nonlinear feature interactions (He and Chua, 2017). Nair and Hinton (Nair and Hinton, 2010) show that ReLU has significant benefits over sigmoid and tanh activation functions in terms of the convergence rate and the quality of obtained results.

Formally, the FC layers are defined as follows:

where L denotes the number of hidden layers; Wl and bl denote the weight matrix and bias vector (to be learned) for the lth layer.

Finally, the output zL of the last FC layer goes through a sigmoid function to generate the predicted CTR as

where w and b are model parameters to be learned.

We have two aims in the MA-DNN model: 1) we would like to make the predicted CTR as close to the true label as possible and 2) we would like the memory component to summarize what a user possibly likes and dislikes.

We achieve Aim 1 by minimizing the average logistic loss as

where y∈{0,1} is the true label of the target instance corresponding to ^y and Y is the collection of labels.

Since Aim 2 is to update mu1 and mu0 according to zL, we should not change the value of zL. To do so, the gradient of loss2 is only computed with respect to mu1 and mu0, but not zL. In this way, the value of zL is updated only by loss1.

The final loss function is given by

loss=loss1+αloss2, where α is a tunable parameter.

This dataset contains a random sample of ad logs from avito.ru, the largest general classified website in Russia. We use the ad logs on 2015-05-20 for testing and others for training. No sampling is performed. The features used include 1) ad features such as ad ID, ad title and ad category, 2) user features such as user ID, IP ID, user agent and user device, 3) query features such as search query, search category and search parameters, and 4) context features such as day of week and hour of day. The number of test samples is over

2) Company advertising dataset. This dataset contains a random sample of ad impression and click logs from a commercial advertising system in Alibaba. We use ad logs of 30 consecutive days in 2019 for training and logs of the next day for testing. The number of test samples is over 1.4×106.

Parameter Settings. The embedding dimension of each feature is set to K=10. The number of FC layers in neural network-based models is set to 3, with dimensions 512, 256 and 64. The dimensions of memory vectors mu1 and mu0 for a user u are both set to 64. The batch size is set to 128 and the balancing parameter α

is set to 1. No dropout is performed. Samples are fed to models in the time order (i.e., no data shuffling). All the methods are implemented in Tensorflow and optimized by Adagrad

(Duchi et al., 2011) for offline evaluation. We make the code publicly available222https://github.com/rener1199/deep_memory. Online implementation is based on a private system with a distributed MPI cluster.

Table 3 lists the AUC and Logloss values of different models. It is observed that on both datasets, memory augmented models outperform all the baselines. Moreover, MA-DNN outperforms DNN and MA-W&D outperforms W&D. These results show that the memory component can indeed extract useful information from users’ historical behaviors and improve the prediction performance.

We conducted online experiments in an A/B test framework over 6 days in April 2019. The benchmark model is W&D. Online CTR is defined as the number of clicks over the number of ad impressions. A larger online CTR indicates the enhanced effectiveness of a CTR prediction model. Online A/B test results in Table 4 show that MA-W&D outperforms W&D and results in an average increase of daily CTR of 2.56% and an average increase of daily CPM of 0.74%.

In this paper, we propose Memory Augmented Deep Neural Network (MA-DNN) for CTR prediction. The proposed MA-DNN achieves a good compromise between DNN and RNN. We are aware of recent work like (Chen et al., 2018) that also utilizes memory networks (Graves et al., 2014). However, (Chen et al., 2018) is proposed for recommender systems and our way of designing the user memory component is different from that in (Chen et al., 2018).

In this paper, we propose Memory Augmented DNN (MA-DNN) for CTR prediction in advertising systems. In particular, we create two external memory vectors for each user, memorizing high-level abstractions of what a user possibly likes and dislikes. The proposed MA-DNN achieves a good compromise between DNN and RNN. Actually, the memory component can be augmented to other models as well (e.g., the Wide&Deep model). Both offline and online experiments demonstrate the effectiveness of memory augmented neural networks for practical CTR prediction services.