A brain-computer interface (BCI) provides a direct communication pathway between user and external devices. Electroencephalogram (EEG) motor imagery (MI) paradigm is widely used in non-invasive BCI to obtain encoded signals contained user intention of movement execution. However, EEG has intricate and non-stationary properties resulting in insufficient decoding performance. By imagining numerous movements of a single-arm, decoding performance can be improved without artificial command matching. In this study, we collected intuitive EEG data contained the nine different types of movements of a single-arm from 9 subjects. We propose an end-to-end role assigned convolutional neural network (ERA-CNN) which considers discriminative features of each upper limb region by adopting the principle of a hierarchical CNN architecture. The proposed model outperforms previous methods on 3-class, 5-class and two different types of 7-class classification tasks. Hence, we demonstrate the possibility of decoding user intention by using only EEG signals with robust performance using an ERA-CNN. 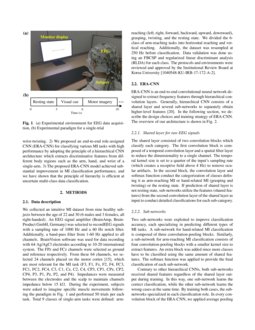 Brain-computer interface (BCI) has been studied for motor-disabled patients to recover and replace their motor function, and even for healthy users to extend motor function capabilities with external devices control [8, 12, 2]. In non-invasive BCI paradigms, EEG signals are easily collected without brain surgery and commonly used due to their high temporal resolution [1]. The EEG signals have been applied to various types of BCI paradigms such as event-related potential (ERP) [15], movement-related cortical potential (MRCP) [7] and motor imagery (MI) [6]. EEG-based BCI paradigms have been developed for interaction between users and external devices [5, 10, 20, 13]. Of these paradigms, MI-based BCI decodes the EEG signals when the user imagines movements. While the user performs a MI task, event-related desynchronization/synchronization (ERD/ERS) patterns represented spectral features over the supplementary motor area and pre-motor cortex [3].

Decoding user intention from EEG data is one of the most challenging issues of BCI. One of the main reasons is that EEG signals have intricate and non-stationary properties and low signal quality [17]

. For MI, it is especially difficult to obtain high-quality data, as it is unknown what the user exactly imagined. Therefore, recent advances related to MI-based BCI approaches have investigated for improving the decoding accuracy using numerous feature extraction or classification methods based on advanced machine learning algorithms and deep learning. For example, filter bank common spatial pattern (FBCSP) algorithm

. A compact CNN with depthwise convolution is trained to summarize individual feature maps over time to classify EEG data

[19]. These studies focused primarily on a few classes classification and non-intuitive tasks contained in BCI Competition IV data (left-hand, right-hand, foot, and tongue). However, intuitive MI is a practical BCI paradigm due to direct interaction between users and devices without artificial command matching [14]. To the best of our knowledge, these approaches have not achieved satisfactory classification performance on intuitive MI yet. Therefore, in this paper, we focused on intuitive MI data classification containing various types of movements of a single-arm.

Hence, our main contributions represented in three folds: 1) We collected EEG data concerning single-arm movement imagery; arm reaching task in 3D space, hand grasping, and wrist-twisting. 2) We proposed an end-to-end role-assigned CNN (ERA-CNN) for classifying various MI tasks with high performance by adopting the principle of a hierarchical CNN architecture which extracts discriminative features from different body regions such as the arm, hand, and wrist of a single-arm. 3) The proposed ERA-CNN model achieved substantial improvement in MI classification performance, and we have shown that the principle of hierarchy is efficient at uncertain multi-class data classification.

We collected an intuitive MI dataset from nine healthy subjects between the age of 22 and 30 (6 males and 3 females, all right-handed). An EEG signal amplifier (BrainAmp, BrainProduct GmbH, Germany) was selected to recordEEG signals with a sampling rate of 1000 Hz and a 60 Hz notch filter. Additionally, a band-pass filter from 1-60 Hz applied to all channels. BrainVision software was used for data recording with 64 Ag/AgCl electrodes according to 10-20 international system. The FPz and FCz channels were selected as ground and reference respectively. From these 64 channels, we selected 24 channels placed on the motor cortex [9], which are most relevant for the MI task (F3, F1, Fz, F2, F4, FC3, FC1, FC2, FC4, C3, C1, Cz, C2, C4, CP3, CP1, CPz, CP2, CP4, P3, P1, Pz, P2, and P4). Impedances were measured between the electrodes and the scalp to maintain channels impedance below 15 kΩ. During the experiment, subjects were asked to imagine specific muscle movements following the paradigm in Fig. 1 and performed 50 trials per each task. Total 9 classes of single-arm tasks were defined: arm-reaching (left, right, forward, backward, upward, downward), grasping, twisting, and the resting state. We divided the 6-class of arm-reaching tasks into horizontal reaching and vertical reaching. Additionally, the dataset was resampled at 250 Hz before classification. Data validation was done using an FBCSP and regularized linear discriminant analysis (RLDA) for each class. The protocols and environments were reviewed and approved by the Institutional Review Board at Korea University [1040548-KU-IRB-17-172-A-2].

ERA-CNN is an end-to-end convolutional neural network designed to extract frequency features through hierarchical convolution layers. Generally, hierarchical CNN consists of a shared layer and several sub-networks to separately obtain higher-level features [21]. In the following section, we describe the design choices and training strategy of ERA-CNN. The overview of our architecture is shown in Fig. 2.

The shared layer consisted of two convolution blocks which classify each category. The first convolution block is composed of a temporal convolution layer and a spatial filter layer to reduce the dimensionality to a single channel. The temporal kernel size is set to a quarter of the input’s sampling rate (which creates a receptive field above 4 Hz) to remove ocular artifacts. In the second block, the convolution layer and softmax function conduct the categorization of classes defining it as arm-reaching MI or hand-related MI (grasping and twisting) or the resting state. If prediction of shared layer is not resting state, sub-networks utilize the features (shared features) from the second convolution layer of the shared layer as input to conduct detailed classifications for each sub-category.

Contrary to other hierarchical CNNs, both sub-networks received shared features regardless of the shared layer output during training. In this way, one sub-network learns the correct classification, while the other sub-network learns the wrong cases at the same time. By training both cases, the sub-networks specialized in each classification role. In every convolution block of the ERA-CNN, we applied average pooling in order to reduce the dimensionality and perform smoothing of the EEG data. The exponential linear unit (ELU) was applied as the activation function

[4], which can help avoid severe distortion of EEG data. The detailed design choices and filter sizes are described in Table 1.

The ERA-CNN loss function consisted of three separate terms and the output of a shared layer is the probabilities for each categorized class. ERA-CNN selects sub-networks based on the prediction probability of each class. In order to take into account the uncertainty in this prediction for each selection (i.e. contribution to sub-networks of the shared layer), the loss function was modified as follows:

Fig. 3 shows the power spectral density (PSD) of EEG data per MI task. The frequency-domain analysis was conducted on EEG data for seeking frequency characteristics using PSD. Through the analysis, we confirmed that a high magnitude was obtained in mu-band (8-12 Hz). Accordingly, it is advantageous to extract frequency features or band power features of the EEG data. For evaluation, the data was organized into 3-class, 5-class, and 7-class. The dataset for 3-class classification contains categorized arm-reaching MI, hand-related MI, and resting state classes. For 5-class classification, we comprised the dataset with arm-reaching (left and right), grasping, twisting, and resting state. The dataset for 7-class classification further separated vertical reaching (VER) classification and horizontal reaching (HOR) classification. We added upward, downward, forward, and backward to the arm-reaching classes in the 5-class dataset. We used 32-size mini-batch and 200 epochs for training. For comparison with existing MI classification approaches, all experiments were conducted in the same test environment.

t-test (p-value < 0.05). Due to the relatively small size of the dataset compared to other domains, performance can be improved using either augmentation or sliding window methods.

In this paper, we proposed an ERA-CNN architecture that considers discriminative features for each upper limb region of MI classification. We demonstrated that the ERA-CNN achieved the highest classification accuracies (0.86, 0.82, 0.63, and 0.66) compared to existing methods (0.76, 0.56, 0.42, and 0.48). This improvement in performance opens up the possibility to perform continuous decoding for various types of upper limb movements. The proposed model can thus be applied to help intuitively control external devices with high accuracy, such as a robotic arm, which can ultimately help improve the autonomy of people with movement disabilities.

The authors thanks to B.-H. Kwon and J.-H. Cho for their help with the dataset construction and S. K. Prabhakar, P. Bertens and J. Kalafatovich for their discussion of the data analysis.