Ovarian cancer is the most lethal cancer of the female reproductive organs. There are 5 major histological subtypes of epithelial ovarian cancer, each with distinct morphological, genetic, and clinical features. Currently, these histotypes are determined by a pathologist's microscopic examination of tumor whole-slide images (WSI). This process has been hampered by poor inter-observer agreement (Cohen's kappa 0.54-0.67). We utilized a two-stage deep transfer learning algorithm based on convolutional neural networks (CNN) and progressive resizing for automatic classification of epithelial ovarian carcinoma WSIs. The proposed algorithm achieved a mean accuracy of 87.54% and Cohen's kappa of 0.8106 in the slide-level classification of 305 WSIs; performing better than a standard CNN and pathologists without gynecology-specific training. 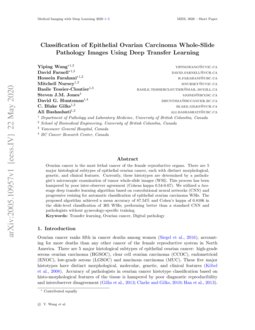 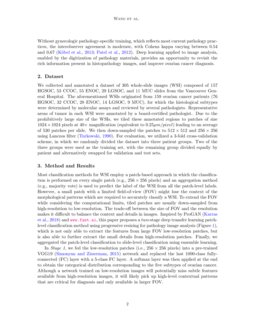 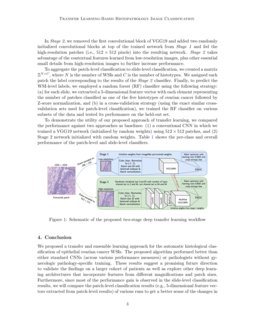 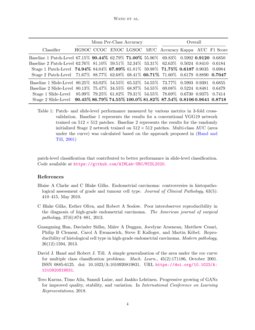 We collected and annotated a dataset of 305 whole-slide images (WSI) composed of 157 HGSOC, 53 CCOC, 55 ENOC, 29 LGSOC, and 11 MUC slides from the Vancouver General Hospital. The aforementioned WSIs originated from 159 ovarian cancer patients (76 HGSOC, 32 CCOC, 28 ENOC, 14 LGSOC, 9 MUC), for which the histological subtypes were determined by molecular assays and reviewed by several pathologists. Representative areas of tumor in each WSI were annotated by a board-certified pathologist. Due to the prohibitively large size of the WSIs, we tiled these annotated regions to patches of size 1024×1024 pixels at 40× magnification (equivalent to 0.25μm/pixel) leading to an average of 530 patches per slide. We then down-sampled the patches to 512×512 and 256×256 using Lanczos filter [turkowski1990filter]. For evaluation, we utilized a 3-fold cross-validation scheme, in which we randomly divided the dataset into three patient groups. Two of the three groups were used as the training set, with the remaining group divided equally by patient and alternatively swapped for validation and test sets.

pixels) and an aggregation method (e.g., majority vote) is used to predict the label of the WSI from all the patch-level labels. However, a small patch with a limited field-of-view (FOV) might lose the context of the morphological patterns which are required to accurately classify a WSI. To extend the FOV while considering the computational limits, tiled patches are usually down-sampled from high-resolution to low-resolution. The trade-off between the size of FOV and the resolution makes it difficult to balance the context and details in images. Inspired by ProGAN

network and replaced the last 1000-class fully-connected (FC) layer with a 5-class FC layer. A softmax layer was then applied at the end to obtain the categorical distribution corresponding to the five subtypes of ovarian cancer. Although a network trained on low-resolution images will potentially miss subtle features available from high-resolution images, it will likely pick up high-level contextual patterns that are critical for diagnosis and only available in larger FOV.

In Stage 2, we removed the first convolutional block of VGG19 and added two randomly initialized convolutional blocks at top of the trained network from Stage 1 and fed the high-resolution patches (i.e., 512×512 pixels) into the resulting network. Stage 2 takes advantage of the contextual features learned from low-resolution images, plus other essential small details from high-resolution images to further increase performance.

classifier. Finally, to predict the WSI-level labels, we employed a random forest (RF) classifier using the following strategy: (a) for each slide, we extracted a 5-dimensional feature vector with each element representing the number of patches classified as one of the five histotypes of ovarian cancer followed by Z-score normalization, and (b) in a cross-validation strategy (using the exact similar cross-validation sets used for patch-level classification), we trained the RF classifier on various subsets of the data and tested its performance on the held-out set.

To demonstrate the utility of our proposed approach of transfer learning, we compared the performance against two approaches as baselines: (1) a conventional CNN in which we trained a VGG19 network (initialized by random weights) using 512×512 patches, and (2) Stage 2 network initialized with random weights. Table 1 shows the per-class and overall performance of the patch-level and slide-level classifiers.