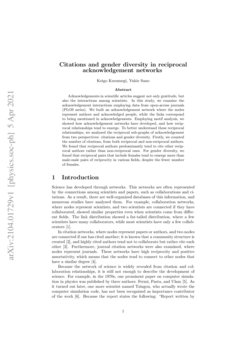 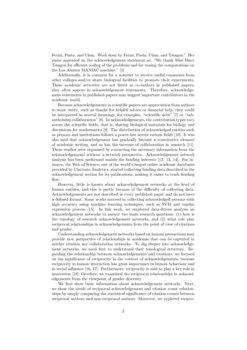 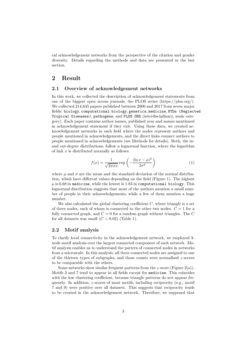 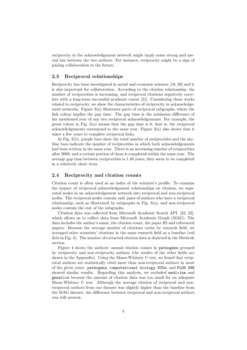 Disparities in authorship and citations across gender can have substanti...
Saif M. Mohammad, et al. ∙

In multiple academic disciplines, having a perceived gender of `woman' i...
Jennifer Stiso, et al. ∙

Inspired by the numerous social and economic benefits of diversity, we a...
Bedoor K AlShebli, et al. ∙

In citation networks, where nodes represent papers or authors, and two nodes are connected if one has cited another; it is known that a community structure is created [2], and highly cited authors tend not to collaborate but rather cite each other [3]. Furthermore, journal citation networks were also examined, where nodes represent journals. These networks have high reciprocity and positive assortativity, which means that the nodes tend to connect to other nodes that have a similar degree [4].

Because the network of science is widely revealed from citation and collaboration relationships, it is still not enough to describe the development of science. For example, in the 1970s, one prominent paper on computer simulation in physics was published by three authors: Fermi, Pasta, and Ulam [5]. As it turned out later, one more scientist named Tsingou, who actually wrote the computer simulation code, has not been recognized as importance contributor of the work [6]. Because the report states the following: “Report written by Fermi, Pasta, and Ulam. Work done by Fermi, Pasta, Ulam, and Tsingou.” Her name appeared on the acknowledgement statement as: “We thank Miss Mary Tsingou for efficient coding of the problems and for runing the computations on the Los Alamos MANIAC machine.” [5]

Additionally, it is common for a scientist to receive useful comments from other colleges and/or share biological facilities to promote their experiments. These academic activities are not listed as co-authors in published papers; they often appear in acknowledgement statements. Therefore, acknowledgement statements in published papers may suggest important contributors in the academic world.

Because acknowledgements in scientific papers are appreciation from authors to some entity, such as thanks for helpful advice or financial help, they could be interpreted in several meanings, for examples, “scientific debt” [7] or “sub-authorship collaboration” [8]. In acknowledgements, the contribution types vary across the scientific fields, that is, sharing biological materials for biology and discussions for mathematics [9]. The distribution of acknowledged entities such as persons and institutions follows a power-law across various fields [10]. It was also said that acknowledgement has gradually become a constitutive element of academic writing, and so has the increase of collaboration in research [11]. These studies were organised by extracting the necessary information from the acknowledgements without a network perspective. Acknowledgement network analysis has been performed mainly for funding interests [12, 13, 14]. For instance, the Web of Science, one of the world’s largest online academic databases provided by Clarivate Analytics, started collecting funding data described in the acknowledgement section for its publications, making it easier to track funding flow.

However, little is known about acknowledgement networks at the level of human entities, and this is partly because of the difficulty of collecting data. Acknowledgements are not described in every published paper and do not have a defined format. Some works succeed in collecting acknowledged persons with high accuracy using machine learning techniques, such as SVM and regular expression process

where μ and σ

are the mean and the standard deviation of the normal distribution, which have different values depending on the field (Figure

1). The highest μ is 6.68 in medicine, while the lowest is 1.83 in computational biology. This lognormal distribution suggests that most of the authors mention a small number of people in their acknowledgements, while a few of them mention a huge number.

We also calculated the global clustering coefficient C, where triangle is a set of three nodes, each of whom is connected to the other two nodes. C=1 for a fully connected graph, and C=0 for a random graph without triangles. The C for all datasets was small (C<0.02) (Table 1).

To clarify local connectivity in the acknowledgement network, we employed 3-node motif analysis over the largest connected component of each network. Motif analysis enables us to understand the pattern of connected nodes in networks from a microscale. In this analysis, all three connected nodes are assigned to one of the thirteen types of subgraphs, and those counts were normalised z-scores to be comparable with the others.

Some networks show similar frequent patterns from the z-score (Figure 2(a)). Motifs 3 and 7 tend to appear in all fields except for medicine. This coincides with the low clustering coefficient, because triangle patterns do not appear frequently. In addition, z-scores of most motifs, including reciprocity (e.g., motif 7 and 9) were positive over all datasets. This suggests that reciprocity tends to be created in the acknowledgement network. Therefore, we supposed that reciprocity in the acknowledgement network might imply some strong and special ties between the two authors. For instance, reciprocity might be a sign of joining collaboration in the future.

Reciprocity has been investigated in social and economic sciences [19, 20] and it is also important for collaboration. According to the citation relationship, the number of reciprocities is increasing, and reciprocal citations negatively correlate with a long-term successful academic career [21]. Considering those works related to reciprocity, we show the characteristics of reciprocity in acknowledgement networks. Figure 3(a) illustrates parts of reciprocal subgraphs, where the link colour implies the gap time. The gap time is the minimum difference of the mentioned year of any two reciprocal acknowledgements. For example, the green colour in Fig. 3(a) means that the gap time is 0, that is, the reciprocal acknowledgements correspond to the same year. Figure 3(a) also shows that it takes a few years to complete reciprocal links.

Citation data was collected from Microsoft Academic Search API  [22, 23], which allows us to collect data from Microsoft Academic Graph (MAG). The data includes the author’s name, the citation count, the paper ID and referenced papers. Because the average number of citations varies by research field, we averaged other scientists’ citations in the same research field as a baseline (red dots in Fig. 4). The number of extracted citation data is depicted in the Methods section.

Gender diversity is said to be one of the key elements for success [24]. In addition to the citation relationship, we examined gender diversity in reciprocal pairs. We assumed that gender-related topology would reflect the reciprocal group’s citation, like author ships and citations [25, 26, 27]. To identify the author’s gender, we applied the Gender API (https://gender-api.com/), which is a gender-telling service using over three million validated names from 191 countries. This database detects accurately whether a name belongs to a male or a female. In our data, 9 in 10 reciprocal authors’ gender are detected with more than 80% accuracy over all datasets. In addition, 500 non-reciprocal authors’ gender in each field dataset are used as a comparison with reciprocal authors.

Because the majority of the nodes in the network correspond to male scientists, 53% in medicine and 75% in computational biology, we computed normalised z-scores of three different pairs of reciprocity: male–male, female–female, and male–female. Figure 5 shows the normalised z-scores of reciprocal pairs. First, male–male pairs are highly likely to appear in more than half of the research fields such as PLOS ONE. However, male–female or female–female are more likely to show in three research fields despite the smaller number of females. For example, the male-male pair is less likely to happen in NTDs and medicine. This suggests that a pair of gender in reciprocity is heterogeneous, and it depends on the research fields.

From the angle of gender diversity, since the male–male pair is dominant in most research fields, including PLOS ONE, the female–female pair emerged more in the fields of biology, pathogens, and NTDs, although the number of females is less than the number of males in our dataset. It should be noted that we showed just divergence of a pair of reciprocal pairs, and it could not directly explain the effect of the citation number of reciprocal authors. We anticipate that the gender diversity and acknowledgement networks perspectives will contribute to the science of success in the future.

There remains the bias of datasets that are only based on PLOS series as a limitation. Because of the data collection difficulty, it takes time to collect an amount of acknowledgement data, we collected only fully named entities to avoid the confusion. This makes acknowledgement network analysis hard to capture the entire scientist’s world as much as citation and collaboration network analysis do. When a database of acknowledgments might be developed in the future, acknowledgment networks would be analysed more precisely. Also, building a multilayer network [28] where each layer represents collaboration, citation and acknowledgement network is an interesting direction for further exploration.

We collected text data from PLOS (https://plos.org/), which has published 214,645 papers from 2006 to 2017. PLOS was officially launched in 2006 and had become, by 2010, the biggest open-access journal. Because PLOS publishes multidisciplinary subjects, it covers a variety of fields, from medicine to the humanities. We collected 214,645 papers from seven research fields: computational biology, biology, medicine, genetics, pathogens, NTDs and PLOS ONE (Table 1).

Statistical significance of a motif M is defined by the z-score ZM:

where NM is the number of motif M in the given network, and ⟨NrandM⟩ and σrandM are the mean and standard deviation of M’s occurrence in the set of random networks, respectively. Random networks correspond to the configuration model in which the pairs of links are stochastically exchanged, while the number of nodes and links are maintained. Then, ZM is normalised as follows:

Citation data were extracted from Microsoft Academic Graph (MAG) using Microsoft Academic Search API querying the author’s names. The data contained authors’ IDs, papers’ IDs, the list of referenced paper IDs and citation counts for each paper. We collected all available 504,796 authors’ citation information. Figure 6 shows the number of available citation data by reciprocity and research field. Regarding citation-related analysis, the datasets of medicine and genetics were excluded because the data of reciprocity were not sufficient to perform a Mann-Whitney U test. We computed two types of citations: citations where a reciprocal author cites the paper of another reciprocal author and citations where a non-reciprocal author cites the paper of a reciprocal author. Next, we compared the differences in citation counts between these two types of citations using the Mann-Whitney U test. Moreover, we calculated the number of citations between reciprocal authors.

To verify which pair of gender on reciprocity appears frequently, we computed the statistical significance z-score as we did in motif analysis. Here, M is a set of male–male, female–female, and male–female. ⟨NrandM⟩and σrandM are the mean and standard deviation of M