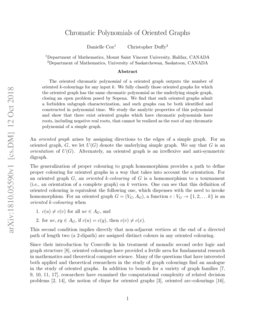 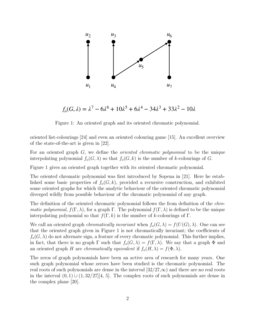 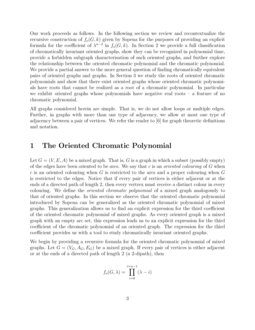 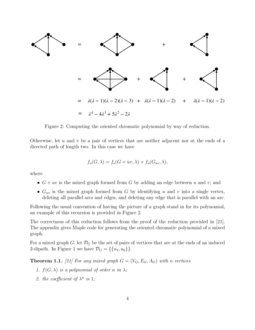 We begin by providing a recursive formula for the oriented chromatic polynomial of mixed graphs. Let G=(VG,AG,EG) be a mixed graph. If every pair of vertices is either adjacent or at the ends of a directed path of length 2 (a 2-dipath), then

Otherwise, let u and v be a pair of vertices that are neither adjacent nor at the ends of a directed path of length two. In this case we have

Following the usual convention of having the picture of a graph stand in for its polynomial, an example of this recursion is provided in Figure 2.

The correctness of this reduction follows from the proof of the reduction provided in [21]. The appendix gives Maple code for generating the oriented chromatic polynomial of a mixed graph.

Let G=(VG,AG,EG) be an mixed graph with non-incident arcs uv,xy∈AG. We say that the arcs uv,xy are obstructing, when

Let OG denote the set of unordered pairs of obstructing arcs in G, a mixed graph. In Figure 1 we have

Observe that every colouring of G using k colours is a colouring of U(G). However if G has an induced 2-dipath or a pair of obstructing arcs, then the converse does not hold. As such, there exists k such that fo(G,k)<f(U(G),k). ∎

where TG is the set of induced subgraphs isomorphic to K3 in U(G).

Let G be a minimum counter-example with respect to number of vertices. Among all such counter examples, let G be the one that maximizes |AG|+|EG|+|DG|. Note that we may further assume DG=∅ by adding an edge between every pair of vertices in DG. The resulting mixed graph has the same set of oriented colourings, and thus the same oriented chromatic polynomial.

The oriented chromatic polynomial of a mixed complete graph on n is equal to the chromatic polynomial of a complete graph on n vertices. The third coefficient of such a graph is given by ((n3)2)−(n3) [19]. Therefore the claim holds for mixed complete graphs. As G is a minimum counter example, G is not a complete mixed graph. As such there exists u,v∈V(G) such that u and v are not adjacent, nor at the ends of a 2-dipath. Therefore c2(G,λ)=c2(G+uv,λ)+c1(Guv,λ). By the choice of G, the claim holds for both G+uv and Guv.

Let C be the set of common neighbours of u and v in U(G). Each of these common neighbours forms a triangle in G+uv. And so |TG|=|TG+uv|+|C|. Further observe that in Guv, the arcs/edges from u and v to a common neighbour c∈C becomes a single adjacency in Guv. Therefore |AG|+|EG|=|AGuv|+|EGuv|−|C|.

Thus the claim holds for G, contradicting the choice of G as a minimum counter example. ∎

For the case E=∅, we arrive at the desired result for oriented graphs.

For an oriented graph G, we have

We further note that in the case A=∅, we arrive at the usual result for the third coefficient of the chromatic polynomial: c2(G,λ)=(|EG|2)−|TG|.

OCHROM-EQUIV  Instance: An oriented graph G.  Question: Is there a graph Γ such that fo(G,λ)=f(Γ,λ))?

Figure 3 gives an example of an oriented graph G and a graph Γ so that G and Γ are chromatically equivalent.

Let G be an oriented graph. Let G⋆ be the mixed graph resulting from G by adding an edge between u and v whenever u and v are at the ends of an induced 2-dipath. We observe the following.

Recall the result of Corollary 1.4. If G has no pair of obstructing arcs, then in G⋆ we have OG=DG=∅. And so c2(G⋆,λ)=(|AG|+|EG|2)−|TG|. Notice that this is exactly the third coefficient of the chromatic polynomial of U(G⋆).

An oriented graph G is chromatically invariant if and only if G has no induced 2-dipath and U(G) is 2K2-free.

Assume G has no induced 2-dipath and that U(G) is 2K2-free. It follows directly that G has no obstructing arcs and that G=G⋆. The conclusion follows by Theorem 2.2.

[13] A graph Γ admits a quasi-transitive orientation if and only if Γ is a comparability graph.

Together, these two theorems fully classify chromatically invariant oriented graphs, as well as those graphs that admit a chromatically invariant orientation. This closes an open problem posed by Sopena in [21] As comparability graphs can be recognized in polynomial time [23], we arrive at the following classification of CHROM-INVAR and OCHROM-INVAR.

A graph Γ admits an chromatically invariant orientation if and only if Γ is (F∪2K2)-free.

We now consider an application of Theorem 2.2 and find the oriented chromatic polynomial of the family of orientations of stars. Let Si,o be the orientation of a star on i+o+1 vertices, with centre vertex x, so that x has i in-neigbours and o out-neighbours.

Observe that S⋆i,o has no obstructing arcs. Further observe that U(S⋆i,o) consists of a copy of Ki,o together with a universal vertex. By Theorem 2.2, we have fo(Si,o)=λ⋅f(Ki,o,λ−1). ∎

Conversely, using the results from Section 1, one can find families of oriented graphs for which there is no chromatically equivalent graph. Let G be an orientation of tK2 for some t>1. Recalling the notation of the previous section we have

If there exists Γ such that fo(G,λ)=f(Γ,λ), then by Theorem 1.1 and Corollary 1.4, it must be that Γ has 2t vertices, t edges and (t2) copies of K3. A simple counting argument implies that no such Γ can exist.

Let G be an oriented graph. There is a graph Γ such that G and Γ are chromatically equivalent if and only if G has no obstructing pairs of arcs.

Conjecture 2.9 is not true when we allow G to be a mixed graph, even when we require A≠∅. Let H be the mixed graph formed from a pair of disjoint arcs by adding an edge between the heads and an edge between the tails. Using the reduction given in Section 1, we find fo(H,λ)=λ4−4λ3+5λ2−2λ. Notably, this is exactly the chromatic polynomial of the example, G, given in Figure 2. The oriented graph G has DG=∅. Therefore G=G⋆. Further OG=∅. And so by Theorem 2.2 we have f(U(G),λ)=fo(G,λ)=fo(H,λ). In particular, H has a pair of obstructing arcs, but yet there is graph Γ such that fo(H,λ)=f(Γ,λ). From this example, one may generate an example on n vertices for any n≥4 by repeatedly adding universal vertices to H and U(G).

For every integer k>0, there exists an oriented graph G so that fo(G,λ) has a root k′ where k′<−k.

Let Dn be the oriented graph on n vertices that consists of a directed path v1,v2,v3,v4 with n−4 leaves, x directed from x to v4.

The polynomial fo(Dn,λ) has real roots at λ=0,1,2. We show that we can obtain arbitrarily large negative real roots by showing that a real root exists between λ=−n and λ=−ln(n) for n even.

It then follows by the intermediate value theorem that fo(Dn,λ) can have an arbitrarily large negative root. ∎

The authors thank Gary MacGillivray for discussions regarding the recursive construction of the oriented chromatic polynomial.