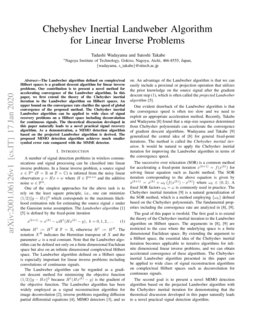 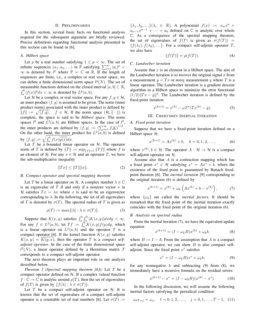 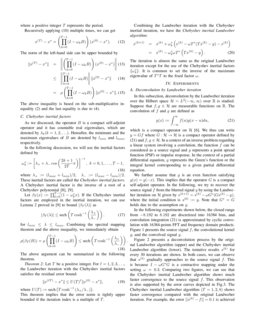 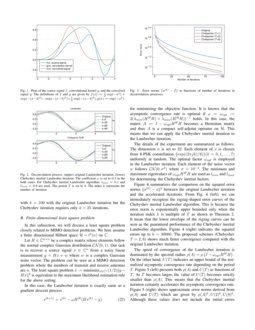 One of the simplest approaches for the above task is to rely on the least square principle, i.e., one can minimize (1/2)∥y−Hx∥2

x under the Gaussian noise assumption. The Landweber algorithm [1] [5] is defined by the fixed-point iteration

where H†:=HT if F=R, otherwise H†:=HH. The notation XH indicates the Hermitian transpose of X and the parameter ω is a real constant. Note that the Landweber algorithm can be defined not only on a finite dimensional Euclidean space but also on an infinite dimensional complex/real Hilbert space. The Landweber algorithm defined on a Hilbert space is especially important for linear inverse problems including convolutions of continuous signals.

[4], MIMO detectors [3], and so on. An advantage of the Landweber algorithm is that we can easily include a proximal or projection operation that utilizes the prior knowledge on the source signal after the gradient descent step (1), which is often called the projected Landweber algorithm [5].

One evident drawback of the Landweber algorithm is that the convergence speed is often too slow and we need to exploit an appropriate acceleration method. Recently, Takabe and Wadayama [8] found that a step-size sequence determined from Chebyshev polynomials can accelerate the convergence of gradient descent algorithms. Wadayama and Takabe [9] generalized the central idea of [8] for general fixed-point iterations. The method is called the Chebyshev inertial iteration. It would be natural to apply the Chebyshev inertial iteration for improving the Landweber algorithm in terms of the convergence speed.

The successive over relaxation (SOR) is a common method for accelerating a fixed-point iteration x(k+1)=f(x(k)) for solving linear equation such as Jacobi method. The SOR iteration corresponding to the above equation is given by x(k+1)=x(k)+ωk(f(x(k))−x(k)) where ωk∈(0,2). A fixed SOR factors ωk=ω is commonly used in practice. The Chebyshev inertial iteration [9] is a natural generalization of the SOR method, which is a method employing {ωk} defined based on the Chebyshev polynomials. The fundamental properties including the convergence rate are analyzed in [8, 9].

The goal of this paper is twofold. The first goal is to extend the theory of the Chebyshev inertial iteration to the Landweber algorithm on Hilbert spaces. The arguments in [8, 9] are restricted to the case where the underlying space is a finite dimensional Euclidean space. By extending the argument to a Hilbert space, the essential idea of the Chebyshev inertial iteration becomes applicable to iterative algorithms for infinite dimensional linear inverse problems, and we can obtain accelerated convergence of these algorithms. The Chebyshev inertial Landweber algorithm presented in this paper can be applied to wide class of signal reconstruction algorithms on complex/real Hilbert spaces such as deconvolution for continuous signals.

The second goal is to present a novel MIMO detection algorithm based on the projected Landweber algorithm with the Chebyshev inertial iteration for demonstrating that the theoretical discussion developed in this paper naturally leads to a novel practical signal detection algorithm.

. If the length of sequences are finite, i.e., a complex or real vector space, we can define a finite dimensional norm space

Let T be a bounded linear operator on H. The operator norm of T is defined by ∥T∥:=sup∥f∥=1∥Tf∥ where f is an element of H. For any x∈H and an operator T, we have the sub-multiplicative inequality

Let T be a linear operator on H. A complex number λ∈C

is an eigenvalue of

is said to be an eigenvector corresponding to

λ. In the following, the set of all eigenvalues of T is denoted by σ(T). The spectral radius of T is given as

The next theorem plays an important role in our analysis described below.

Let T be a compact operator defined on H. If a complex valued function f:C→C is analytic around ρ(T), then the set of eigenvalues of f(T) is given by {f(λ):λ∈σ(T)}.

Suppose that we have a fixed-point iteration defined on a Hilbert space H:

where x(k),b∈H. The operator A:H→H is a compact self-adjoint operator on H.

Assume also that A is a contraction mapping which has a fixed point x∗∈H satisfying x∗=Ax∗+b, where the existence of the fixed point is guaranteed by Banach fixed-point theorem [6]. The inertial iteration [9] corresponding to the original iteration (6) is defined by

From the inertial iteration (7), we have the equivalent update equation

for any nonnegative k and subtracting (9) from (8), we immediately have a recursive formula on the residual errors:

where a positive integer T represents the period.

Recursively applying (10) multiple times, we can get

As we discussed, the operator B is a compact self-adjoint operator and it has countable real eigenvalues, which are denoted by λk(k=1,2,…). Hereafter, the minimum and the maximum eigenvalues of B are denoted by lmin and lmax, respectively.

In the following discussion, we will use the inertial factors defined by

Let βT(x):=∏T−1k=0(1−ω∗kx). If the Chebyshev inertial factors are employed in the inertial iteration, we can use Lemma 2 proved in [9] to bound |βT(λ)| as

for lmin≤λ≤lmax. Combining the spectral mapping theorem and the above inequality, we immediately obtain

The above argument can be summarized in the following theorem.

Let T be a positive integer. For ℓ=1,2,3,…, the Landweber iteration with the Chebyshev inertial factors satisfies the residual error bound:

This theorem implies that the error norm is tightly upper bounded if the iteration index is a multiple of T.

The iteration is almost the same as the original Landweber iteration except for the use of the Chebyshev inertial factors {ω∗k}. It is common to set the inverse of the maximum eigenvalue of T∗T to the fixed factor ω.

In this subsection, deconvolution by the Landweber iteration over the Hilbert space H=L2(−∞,∞) over R is studied. Suppose that f,g∈H are measurable functions on R. The convolution of f and g are defined as

which is a compact operator on H [6]. We thus can write y=Gf where G:H→H is a compact operator defined by (21) and f,g∈H. In a context of an inverse problem regarding a linear system involving a convlution, the function f can be considered as a source signal and g represents a point spread function (PSF) or impulse response. In the context of a partial differential equation, g represents the Green’s function or the integral kernel corresponding to a given partial differential equation.

We further assume that g is an even function satisfying g(x)=g(−x). This implies that the operator G is a compact self-adjoint operator. In the following, we try to recover the source signal f from the blurred signal y by using the Landweber iteration on H given by s(k+1)=s(k)−ωG∗(Gs(k)−y), where the initial condition is s(0):=y. Note that G∗=G holds due to the assumption on g.

In the following experiments shown below, the closed range from −8.192 to 8.192 are discretized into 16384 bins, and convolution integration (21

) is approximated by cyclic convolution with 16384-points FFT and frequency domain products. Figure

In this subsection, we will discuss a least square problem closely related to MIMO detection problems. We here assume a finite dimensional Hilbert space H=l2(n) on C.

CN(0,1). Our task is to recover a source signal x∈Cn from a noisy linear measurement y=Hx+w where w is a complex Gaussian noise vector. The problem can be seen as a MIMO detection problem where the numbers of transmit and receive antennas are n. The least square problem ^x:=minimizex∈Cn(1/2)∥y−Hx∥2 is equivalent to the maximum likelihood estimation rule for the above setting.

In this case, the Landweber iteration is exactly same as a gradient descent process

for minimizing the objective function. It is known that the asymptotic convergence rate is optimal if ω=ωopt:=2(λmin(HHH)+λmax(HHH))−1 holds. In this case, the matrix A:=I−ωoptHHH becomes a Hermitian matrix and thus A is a compact self-adjoint operator on H. This means that we can apply the Chebyshev inertial iteration to the Landweber iteration.

The details of the experiment are summarized as follows. The dimension n is set to 32. Each element of x is chosen from 8-PSK constellation {exp((2πjk)/8)}(k=0,1,…,7) uniformly at random. The optimal factor ωopt is employed in the Landweber iteration. Each element of the noise vector w follows CN(0,σ2) where σ=10−4. The minimum and maximum eigenvalues of ωoptHHH are used as lmin and lmax for determining the Chebyshev inertial factors.

Figure 4 summarizes the comparison on the squared error norms ∥s(k)−x∥2 between the original Landweber iteration and the accelerated iterations. From Fig. 4 (left), we can immediately recognize the zigzag-shaped error curves of the Chebyshev inertial Landweber algorithm. This is because the error norm is exponentially upper bounded only when the iteration index k is multiple of T as shown in Theorem 2. It mean that the lower envelope of the zigzag curves can be seen as the guaranteed performance of the Chebyshev inertial Landweber algorithm. Figure 4 (right) indicates the squared errors up to k=30000. The proposed schemes (Chebyshev T=2,8) shows much faster convergence compared with the original Landweber iteration.

The speed of convergence of the Landweber iteration is dominated by the spectral radius ρ(A)=ρ(I−ωoptHHH). On the other hand, U(T) indicates an upper bound of the normalized asymptotic convergence rate depending on the period T. Figure 5 (left) presents both ρ(A) and U(T) as functions of T. As T becomes larger, the value of U(T) becomes strictly smaller than ρ(A). This means that the Chebyshev inertial iteration certainly accelerates the asymptotic convergence rate. Figure 5 (right) shows approximate error norms derived from ρ(A) and U(T) which are given by ρ(A)k,U(2)k,U(8)k. Although these values does not include the initial errors ∥s0−x∥, these curves qualitatively explains the behavior of the actual error curves in Fig. 4 (right). These results support the usefulness of the theoretical analysis discussed in the previous section.

The soft projection operator η:C→C used here is defined by

where S⊂C is a signal constellation [7]. The iteration of the projected Landweber algorithm is fairly simple; the soft projection operator is just element-wisely applied to the output s(k+1) in (22) and then, the output is passed to the inertial iteration process. The details of the experiments are as follows. The channel model is exactly the same as that used in the previous subsection (32×32 MIMO channel with 8-PSK input). The minimum and maximum eigenvalues lmin and lmax are determined according to the Marchenko-Pastur law. Figure 6 presents the symbol error rate (SER) of the proposed scheme. The projected Landweber detectors achieves one or two order of magnitude smaller SER than those of the MMSE detector. The accelerated schemes (Chebyshev T=4,8,16) provide steeper error curves than that of the projected Landweber detector without Chebyshev inertial iteration (denoted by “Landweber”). This observation supports the potential of the Chebyshev inertial iteration.

This work was supported by JSPS Grant-in-Aid for Scientific Research (B) Grant Number 19H02138.